Are you looking into Sports - Second layer tokens potential future?

When we see more and more people talking about the potential in the second layer tokens here at Hive I want to share my thoughts on the sports token that's tied to the Sportstalksocial community.

It's valued at $0.00008 right now, but it has risen from a valuation from $0.00002 before christmas and now we ususally see it has some decent volume each day as well.

So what has happen that could have increased the interest again in this sleeping community? Well there has actually been going on alot of discussions in the background on Discord how and what could be done to help the community.
The current leader @patrickulrich has been very open to new ideas and want to involve the community more in what's happening, so he introduced the Archon-governance system which basically is a voting system where the community can decide which direction they should take.

With this new system in place the community has now passed proposal about starting and funding a Hive-witness, to help decentralize Hive-engine but also show the rest of Hive that we are in business and active in what's happening here.

Secondly we just voted about changing our ads-deliver service so we can get an additional income to the governance of Sportstalk. We can choose what we will do with the funds, buyback and burn tokens, use it to onboard new users or maybe hire people to build even more stuff to the community?
We will see how much we potentially can earn from this new source of income, but atleast we have it in place and with the new found interest we can potentially make some. 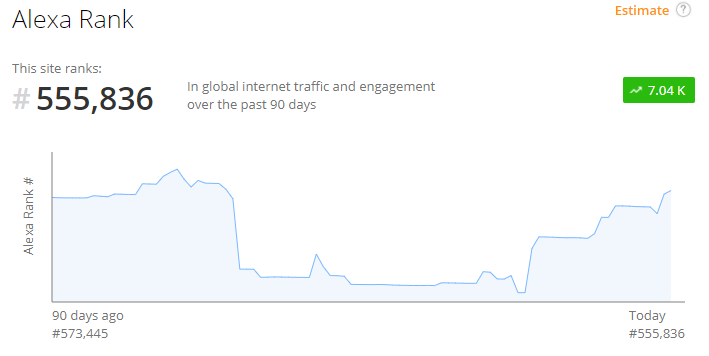 We can clearly see that the interest has spiken when we look at the stats from Alexa. We are climbing upwards and we have a impressive time on the site with 9:16!
The last proposal that we just voted through was to give some support to @amr008 engagement project called Hivelayers (I believe). This will give the project a delegation of 10 million from the governance funds and can be used until we as a community wants to something else with it.
This project anyhow is designed to incentives people to engage with the content on the Sportstalksocial frontend, because we want people to use the frontend and ergo see the ads and therefor increase revenue.

We have also seen an increase of people spamming the sportstalk tag on posts that are questionable if they should be there, and this is probably because the word has spread about the uptrend in Sportstalk again.
If some big player would want to buy in today it would require only $80 to aquire a 1 million sports and 800$ to become a whale in the system, that's probably one of the cheapest tribes atm.

We will probably see proposal about the taxation of non-native post coming in to the community in an attempt to incentives more people to use Sportstalksocials own front-end.
Hopefully will we see some developers coming over with proposals to get som funding for building stuff like our own Sports-twitter solution, Sports-betting utilizing the sports token and even games where the sports token could be the potential token in the games. There are alot of possibilities and Leofinance has shown all communities here on Hive that it's possible to succeed.

Myself will continue staking and buying more tokens everyday since I belive this gonna go to new places, and then I want to be a big player in that!

Sportstalk prospect is just starting.
It's show we are meant for great things here.
Can't wait to see us mooning as before.