My Monthly Hive Stats and Hive Power Up day

Today Hive had a massive pump and the price almost doubled. Nobody would have expected such a massive pump. I hear some people saying that they all booked their profits and made some decent money by selling their Hive. This is a good thing. I don't have enough liquidity with me to do some trades today. I was going to sell some spare Hive I had with me for 80 cents and at the time of writing this article, I see the value of Hive at 86 cents already which is almost my bought price a few months back.

I'm thrilled to see this massive pump. I don't know what is pumping Hive but it is definitely bringing some happiness to people who are staying invested here. I was glad to purchase some Hive when the price was around 50 cents and now that the price is pumped, it is definitely a good gain I should say. I have all my Hive locked as Hive power but I'm glad that I was able to make use of the opportunity to increase my Hive power when I had the time. I guess it is hard to get more Hive Power when the price of Hive is at its peak.

Today after the massive pump, many people are trying to sell their Hive and book some profits. But I don't really have so much of Hive. I somehow managed to get 100 Hive and powered it up today on the occasion of Hive power-up day. My Hive power is slowly growing and I'm glad I'm pushing myself hard towards the goal of reaching 50k Hive power before the end of the year. 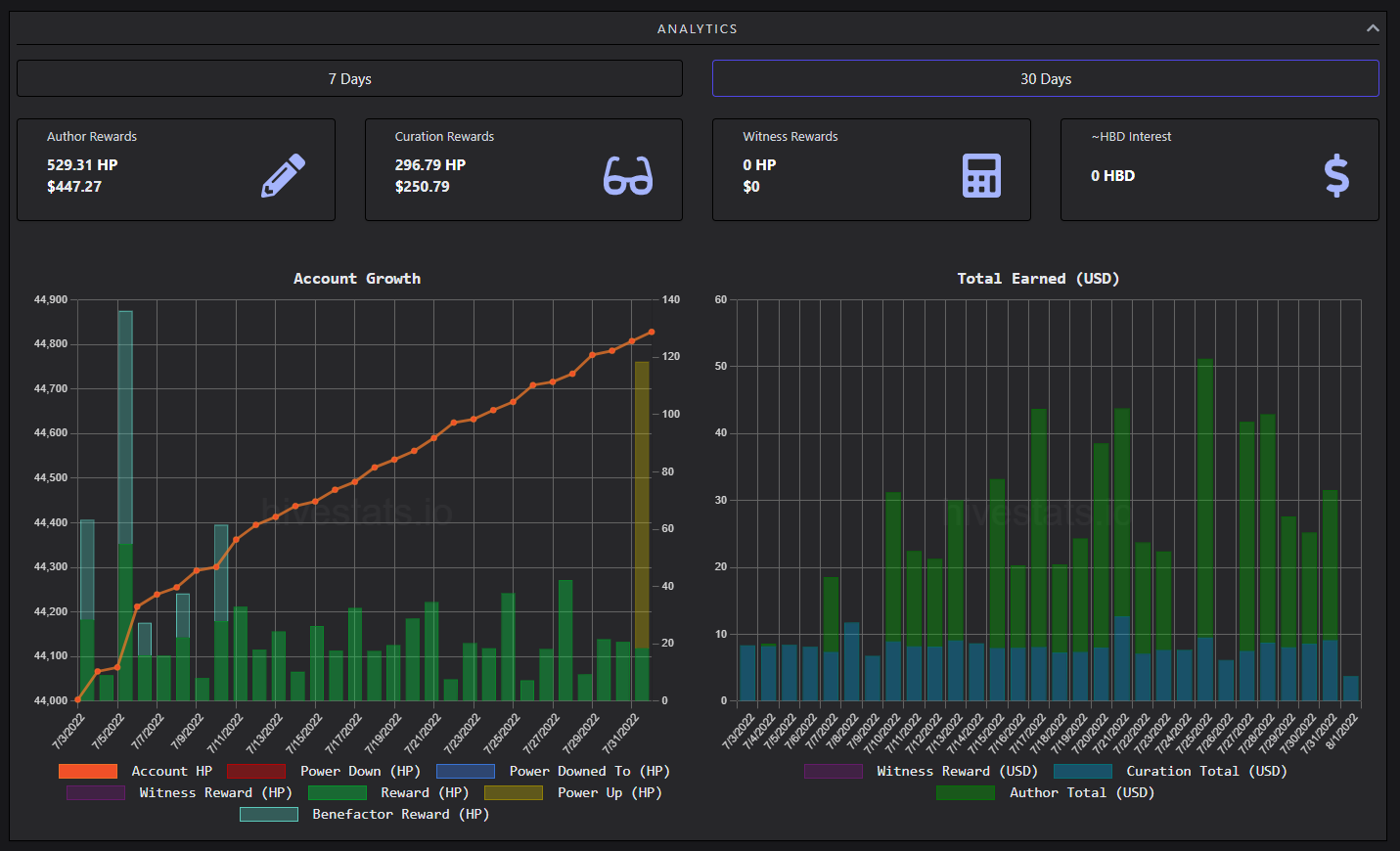 Even though the Author rewards and Curation rewards are not very significant, based on what I earned in the last month, it will appear as if I earned a lot because the price of Hive is calculated based on today's price and it appears to be a big one. I'm really glad I'm able to make close to 500$ from author rewards and curation rewards every month. Hopefully, this value increases going forward or at least remains constant. Maybe if the value of Hive is increasing, this might increase as well.

I have reached a total of 44,900 Hive Power right now which is very close to getting 45,000 Hive Power. After this, I will need another 5000 Hive to complete my goal for the year. We have only 4 more months left. I have to somehow make 1500 Hive per month to reach the goal. I'm not going to push myself hard. But at the same time, I will try to keep working towards my goal. I wish the price of Hive also stays below 1$ making it easier for me to reach the goal. But I want Hive to go above 1 $ after my goal is reached.

Today Hive had a massive pump and reached close to 90 cents. This is really great. Only a few days back we saw Hive's price at around 40 cents. I was even going to use my liquid HBD to purchase Hive but unfortunately, before I did that Hive pumped today and now I don't have any liquid Hive in hand to book some profits. I'm glad that at least my portfolio value is looking very good because of this pump. I would be very happy to see Hive cross the 1$ mark and I might arrange some Hive at that time to sell and book my profits.

Nice power up! Going to be interesting to see the earnings now that hive pumped and seems to be holding pretty well above $0.80

It's holding unnervingly steady isn't it. Normally I try not to follow the Hive price in too much detail but when something exciting happens like this pump it's hard to now keep checking it!

Yeah it already created a good base price. Let's hope it holds at least the current price.

Happy Hive Power Up day! I also didn't sell anything in the pump today - just powered up as I'd already planned to.

Good to see you are very close to your goal, the pump doesn't really move me because I did not sell any hive and just wanna keep growing

That's my intention too. I want to grow my Hive power. But good that we will at least get some nice rewards from posting.

i still think selling (RN) isn't Good as hive price is so underrated. As far i think Hive pump has something to do with HBD pump

Is it possible people bought so many HBD back which pumped it and now they converted into Hive on power up day?.

I guess something like this happened today, whatever it is Good.

Congrats for the power up and the Whole month. You're so close to achieve Goal of 50k HP and definitely in no time you'll reach there.

Wish you a blessed and healthy August Ahead.

HBD pumps along with Hive because there is a swap pressure on the internal market as there are no big exchanges listing HBD.

Oh so this it, thanks for telling.

Any chance for HBD getting listed on big exchange soon?

Good job on your powerup and I wasn't really expecting the pumps. I wonder how many people are targetting that $1 mark to take profits.

There will definitely be lots of people waiting. That's the reason why the price is going back to 50 cents slow and steady now.

As usual, I missed this one too. But not next time. Will definitely keep some Hive and HBD liquid from now onwards. 50K is not far. I am sure you are going to crush it Bala. Cheers! 🔥🤘

When the price of Hive goes higher, accumulating Hive can get slow. But I'm also confident that I can make it before the end of the year. Let's see.

By the way thanks for the witness votes man. Cheers! 🙏