Space Exploration -My Brief Thoughts On The Affairs From Moon Landing To Todays Commercial Space Flights and Others.

@beehiver24 53
about 1 year ago
STEMGeeks

Hello, my friends I welcome you once more here in this community. How are you? I hope, you are doing pretty good stuffs in your households by practising the rules of health and covid safety norms to be protected. All in all, I wish your good health condition and welfare.

Today, I want to talk to you with an amazing feat that has been achieved by the modern scientists in the relatively short period of time, the enormity of scientific technological revolution that has been made with courage, space craft engineering and space travel nowadays picks more interest than ever on this current time.

Let me tell you one story that has captivated for so many times is that, whenever I was a child, in my school days, there were my fellow classmates who wanted to become astronauts and had sky high ambitions to conquer space and bring out alien from other planets. I was back then much curious to know about what was the ecstatic thing about space exploration that allured these young kids to be futuristic and highly motivated to become a crew member for space mission.

But, as I grew up and became mature then I realized its not the improbable hardwork and sacrifice that comes as a barrier but the uncontrollable dream and imagination that these young soft minds posses to conquer.
These thinking make me believe in their dream and tend me to carry an abiding faith in their effort and deeds.
I hope, they will continue pursuing their work and incessant study to be the capable self to take forward the space missions even one step further, making indomitable achievement and leap forth to know the unknown and see the unseen.
At the same time, it makes me to be rather optimistic and hopeful about todays children that they are not letting us down in frustration and weakness, rather they have dreams, dreams that reaches far beyond even their threshold of knowledge and understanding. 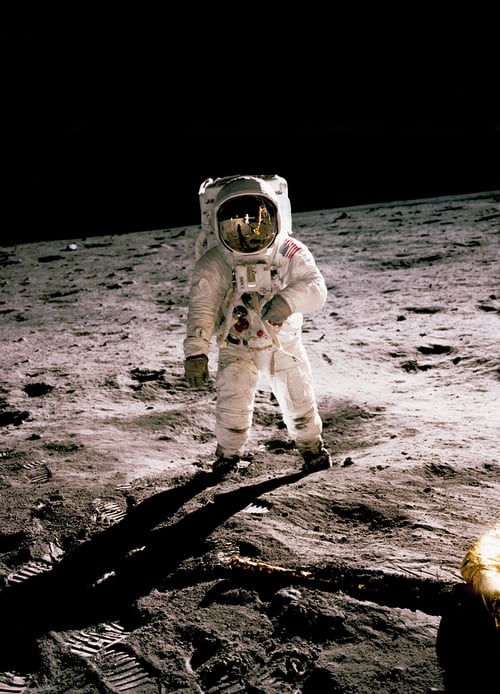 Src
If a 12 years of boy or child answer your, Whats your aim in life? question, that they want to be future explorer of Mars and beyond, Jupiter and Saturn, then you should be proud out loud that your future is enlightening.
I personally, faced this scenario and felt the same.

Back in the later half of twentieth century, when Apollo 11 mission started and landed on the moon safely and returned home faultlessly, the whole world started to believe deep in their heart, emotions popped out of veins with overflowed joy, that its possible, that our science could bring down the impossible word to be possible and create a new definition of success. After that event, many decades passed, we entered to the 21st century, the age of smartphones and ultra modern technology started to flash like floods. This short span of time gifted us with most of the inventions and thriving technology .

Legends started to be born like Elon Mask who single handedly commercialized the space missions as adventures and funny thrilling journey for general people and rich classes.
The face of space operations began to change, when back in previous century it was considered a risky & courageous aspirations to go up with rocket and launching vehicles, a nagging fear arousal that the spacecraft and mechanical devices might malfunction, leading to catastrophic collision & accident with possible failure rate, uncertainty of performance, all these things vanished away leaving the best sides of spacecraft theories and their manifestation with real time application. Rocket Engineers of this time should take proud of their astonishing achievement and contribution. Src
Elon Mask created a commercial company named SpaceX, situated in Florida, where its launching pad is located at Cape Canaveral. Now, after having the premium rocket fuel and sophisticated design of ultra modern space crafts, its very feasible to launch tourists to revolve around the earth and overlook the ISS and have a relaxation there for a couple of hours or days.
Few decades ago, people would have said that I am gossiping and telling myth, but its quite true and genuine in todays standards of living for rich classes. Elon Mask with his excellent work and genius in Engineering and inventing skills have made it possible.
So, thanks go to him.
You might have seen in journals and newspapers or internet that Jeff Bejos, the Amazon CEO, paid a 8 hours of visit in the space. It tells a lot, well.

Now, I would finish saying that, I am quite joyously apprehended for the future for one certain reason. Two decades ago, Bill Gates told us that, he would start to democratize Computers and the rest is history..
If, Elon Mask say that the same thing,
Oh My God, I am shocked, what is the future up ahead!! 😱,Only God Knows!!!

Congratulations @beehiver24! You have completed the following achievement on the Hive blockchain and have been rewarded with new badge(s) :