The state of Hive blockchain is a series of recurring posts tracking different stats on the chain and bringing infographics to your fingertips. The current report is focusing on the number of users that have joined this blockchain and will break down the growth using different dimensions. It will be published when specific periods will be completed in order to offer a broader image of the evolution and growth of the Hive blockchain user base. Current stats will cover the period up to August 2022 (included). 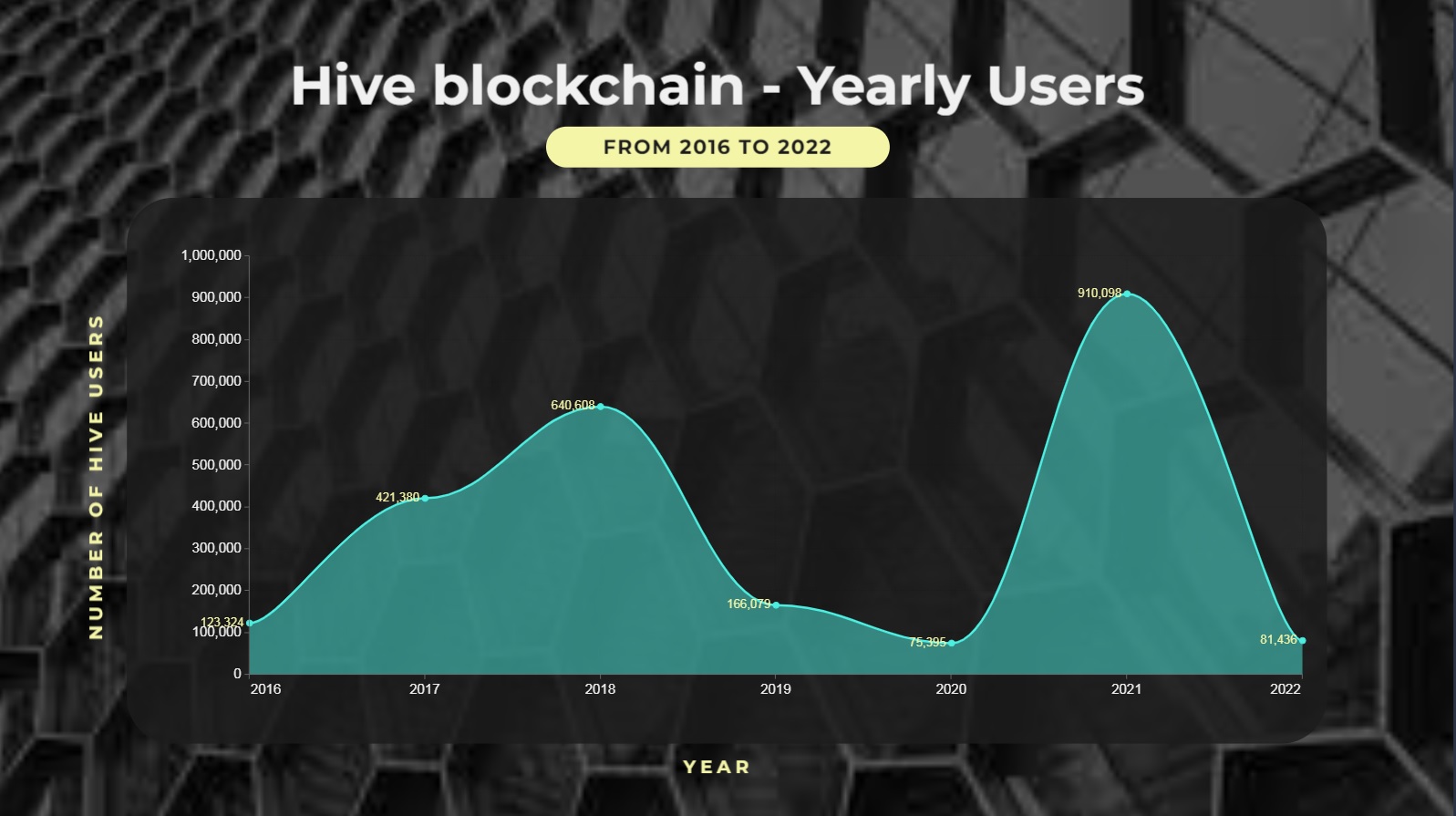 Yearly users are getting stronger and stronger as Hive blockchain continues to fortify its user base and also attract new users with existing project enhancements and new ones lightly coming to market. For 2022 we upped the user base with 81,436 new accounts and we reached an overall of 2,418,325 which is quite impressive. Probably this year we can target 2,500,000 accounts which is a great number to reach! 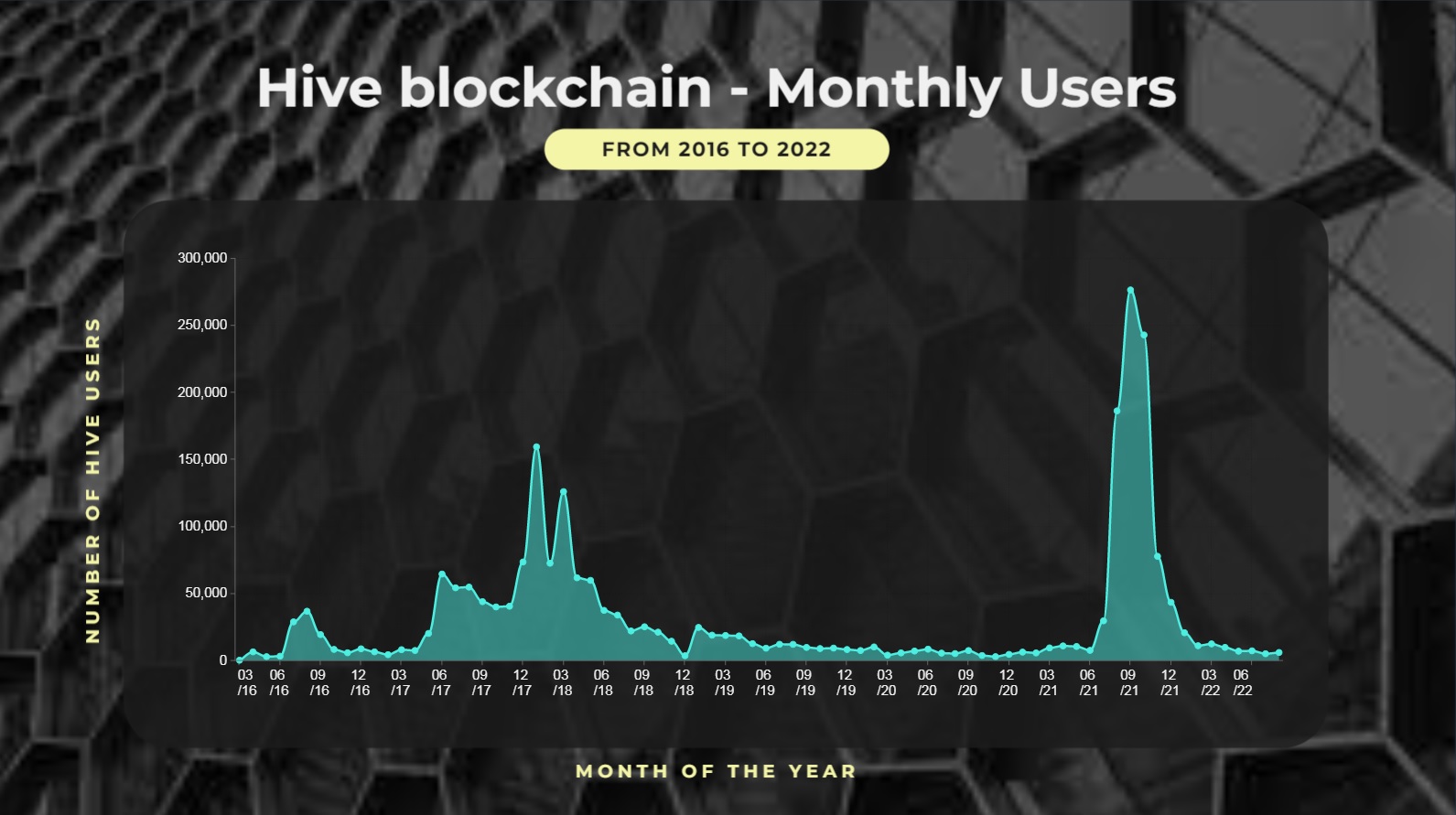 We had another good month in terms of growth as in August 2022 we expanded and outreached 6265 new users. That is a little bit more than on July 2022 when we added 5335 new registrations and I think we should do better in the incoming months. Things are evolving quite well within the Hive ecosystem and development continues also at the base and infrastructure level with new HF, but also existing and new projects are yet to deliver new features like Splinterlands, Major Soccer League, Ragnarok games or Speak Network.

While "The state of Hive blockchain - Users reports" presented the Yearly and Monthly users infographics, it would be great if you would offer any feedback or what other insights you might want to see in regards to the Hive blockchain's user base. This will help in refining current stats and adding new ones that will offer more information for any interested party. Much appreciated!

Good report here, it's amazing how the economical cycles affect to the entrance of newcomers and also the activity on already onboarded users

We keep on growing month after month, even if some accounts are not yet transactional on the Hive blockchain. The numbers are encouraging and new projects should boost them quite a bit.

Hey nice infographics :)
These are new accounts created per year/month?
If someone is looking at the charts without the text he/she might think that those are the active users ...

Thanks for the appreciation and yes, these are all accounts regardless if they are active or not. Probably a good idea is to derive from these some other stats to highlight those that are doing transactions within the timeframe analyzed.

These charts are not clear. Do they show new accounts or total number of active accounts on a monthly or yearly basis?

It's all accounts regardless of their activity. I will consider emphasizing only the active users within the next reports and capturing their infographics.

This are nice stat and the most important thing is we are developing.

Growth never stops and we are taking steps to continue that, wished just we'd made bigger steps. But as the past proved, it is enough a new project in the pipeline to kick it and we could get a serious boost.

Now about the feedback you asked I would also like to see the the "true" numbers, meaning how many bots are, how many inactive and active accounts (you can set the period of time for example inactive for 1-2 months active per week etc etc)

Great feedback and I've already started looking on how I categorize a user for being Active or not depending on the transactions it does on the blockchain. As I am doing for now the Yearly and Monthly reports I will be considering these metrics to evaluate their activeness.

The only concern is about Steemit inherited accounts if I should evaluate their activity also after the Hardfork in order to distinguish those that did continue their activity on Hive.

Yes I think there are ways to track the transactions of each account and then categorize it based on that. I used something like this in older posts I think. Penguinpablo used to run statistics like this I think.

As far as it concerns the steemit accounts it would be a cool one time post for all of us that came from there to have a bigger picture out of curiosity but the newer members that have no clue what we are talking about will not care :p

This blockchain is becoming more popular each day is passing by!

In my opinion new accounts, total accounts are useless stats. What good it is to create accounts that do not produce value? That are inactive or do arguably harmful activities (plagiarism for instance) ?
Failing a clear way to measure "value added", a more useful proxy would be "RC consumed". So not even "total number of transactions" because not all transactions are equal. Tracking "RC consumed per year" is the closest I can think of to measuring Hive GDP ... who can do that ?

We will definitely hit the 2.5 mil mark this year. It is just a matter of time when.