What is the sense of a 1% upvote on the Hive blockchain?

I like to watch business investment TV shows like Dragon's Den Canada or UK and Shark Tans US as it gives me some energy to want to do more and even start a business in order to contribute to the world. And in both series at some point, I would see some business owners coming to potential investors and offering them 1% of their business for a considerable investment. And always the investors would provide feedback that for 1% they don't even have the motivation to get out of their beds. So as I have seen several 1% upvotes on the Hive blockchain with resulted in $0.00-$0.01 upvotes, I am doing an analogy and putting a question out in the open. 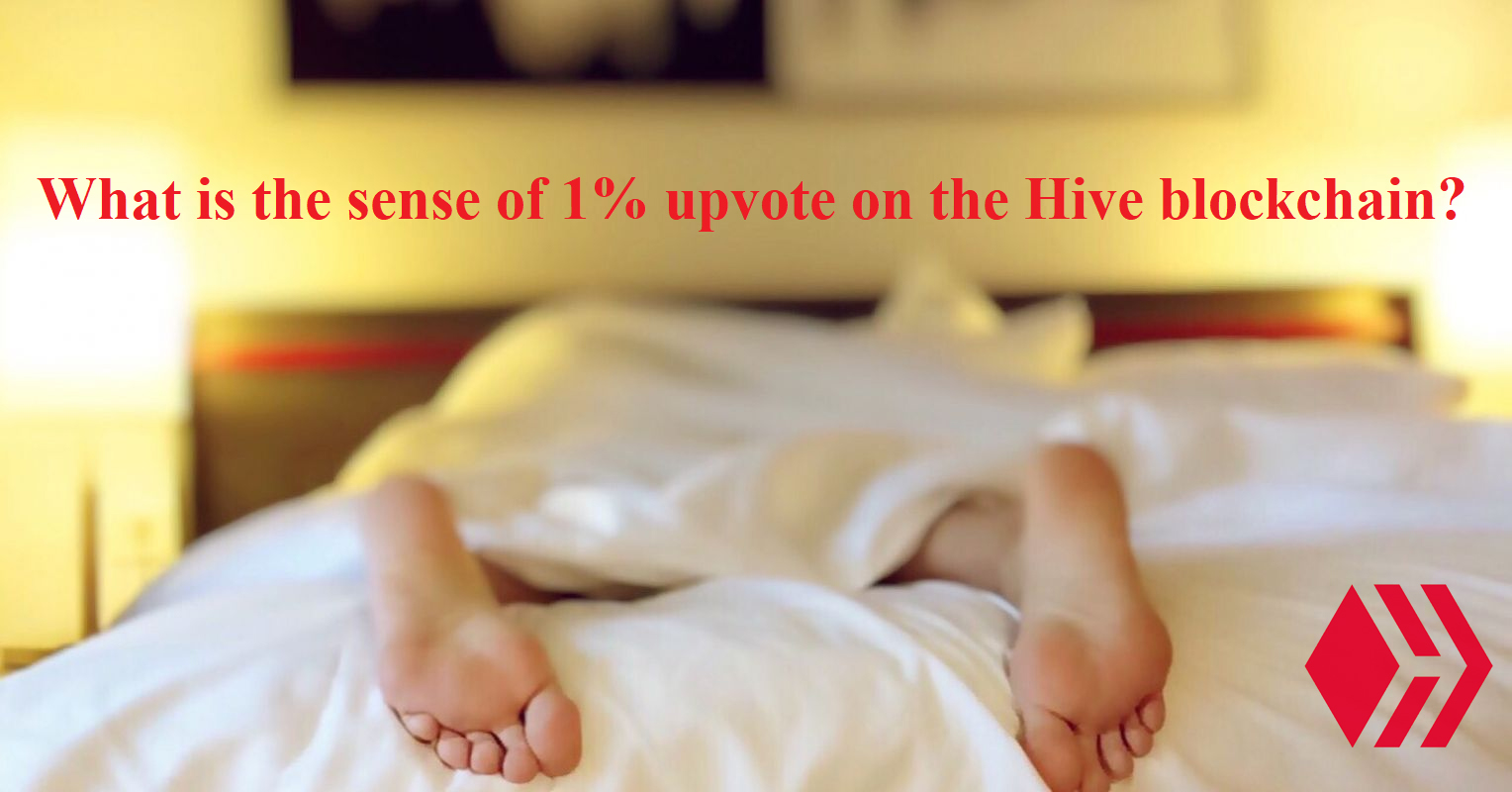 What is the sense of a 1% upvote on the Hive blockchain?

For me, my routine on the Hive blockchain is to engage with the content creators that I like and besides commenting to leave also an upvote of 100% for posts and 50% for comments. With an upvote of $0.25 based on my current Hive Power, I feel that this percentage will provide enough incentives, motivation, and appreciation for those contents. But when I see a 1% upvote left by others it translates to $0.00 - $0.01 in value, I simply cannot understand why someone would give such a small amount. It is not like they are spreading more than 100 upvotes per day, but they spread fewer ones with such a small percentage.

Giving a 1% upvote simply doesn't encourage others to create content and share it, thus making the entire Hive ecosystem stay stale instead of getting momentum and more users on the blockchain. We all have heard the phrase sharing is caring, but when you see such things you understand that in some cases this is quite not true. I understand that we are all different and have our views on things, some are more stingy or cheap in this way, but in doing so we put the brake also on our brakes. Maybe there are other reasons and I invite anyone with an opinion on that to get it out there in the open.

I can see the sense in giving a 1% upvote on comments if you're an absolute whale and even 1% leaves a few cents there, allowing you to spread the love to lots and lots of comments.

I still leave 100% for both, because my vote is still only worth a cent or two, and it's a source of frustration that I run out of useful vote power long before I run out of interesting things to read that are worthy of upvotes !

If you are a whale and 1% still has some weight it makes sense, but giving 1% and getting an upvote of $0.00 - $0.01 I think simply shows you are not willing to share. It is anyone's right, but I think this works like a brake for the growth of the platform. I have a vote weight of $0.25 built in 5 years and my routine is to upvote 100% on posts and 50% on comments.

Sometimes, people have a tribe token multiplier setup, and their 1% Hive upvote is worth 100% LEO upvote, which could be significantly higher... But, that's just an example...
Also, if a whale upvotes with 1% it could be still a nice amount + more people can be rewarded... aka better distribution of rewards...
But, I do agree that there is no sense to upvote with 1% if you have a small amount of HP as you will not reach the min 0.001 payment

Yeah, good points on the multiplier, I simply forgot about it focusing just on Hive. That's a good condition and adds an explanation for it. Probably that shows that the curator is willing to curate more on second layer tokens.

I do that. Not with 1% but with variable values from 5% to 20%. The reason is simple, it is to mark that I have left a comment and not leave another one because of an error.
I don't see anything wrong with it, all votes help, I'm delighted to receive them. Also keep in mind that although the vote is low at the base layer in Layer 2 tokens it may not be that low.

I think that 5% could still help, while I prefer to distribute more of the wealth in order to uplift and motivate others to engage.

I think as long as it goes above the minimum payout threshold, it is ok. It is a sign you support the author and like their content. There are people with different-sized stakes and cannot all give out meaningful votes.
If I discover a new author, I might start out with smaller votes and if the good content continues, increase it.
Another situation is that perhaps it is a great post but the author is well appreciated, I may not vote so high as it will not have so much impact as an underappreciated post/author that would need more support, but I still want to acknowledge good work.

Plus, each upvote, especially from higher reps, helps increase the rep of the author too, it isn't just about rewards.

That is a good routine and I agree that being above the minimum payout threshold is good enough. Still, people are putting in the work when creating content so we should try to evaluate that along with the time put in and show them some gratitude with a decent upvote.

Yeah I agree. However, we can also only support so many people.

If it's less than what can be added to our wallet (as per I know $.02) then it doesn't make any sense. I always give a full upvote because I have less than a cent of vote value. So limiting it to less than 100% would make me look dumb!

Yeah, as I was growing within this ecosystem I had the same thinking. And now even if my upvote of $0.25 grew decent enough, I am still growing using the same principles. Probably above $1 I might split it a bit more, but 1% for me sounds like dust.

I agree. If it doesn't add anything then we shouldn't be doing it just to show we 'upvoted'.

Yeah, that's good enough based on the current HP that you are holding.

I agree with, 1% upvote does not makes sense at all, unless you are a whale.
Same for people upvoting 15% or less with less than 2000 HP

Totally agree, we need to share and help others grow as we've precedently been supported by others.

A 1% upvote on Hive makes sense when it is worth over or equivalent to $0.04, other than that I'd like to also understand why someone would do that, it makes no sense and definitely not encouraging for content creators or engagement.

But when I see a 1% upvote left by others it translates to $0.00 - $0.01 in value, I simply cannot understand why someone would give such a small amount. It is not like they are spreading more than 100 upvotes per day, but they spread fewer ones with such a small percentage.

I believe the ones curating like that are using some curation trail and don't want to drain their power.

I must say it took me a while to discover how the voting power works.
For instance the "Don't go below 80%" and time to replenish aren't very clearly described.
Maybe that could also cause people to send such low votes.

Indeed, that could be another explanation.

I personally do give 1% votes because I have 99x multiplier on all upvotes for other tribes. Since I usually have my Leo voting Power higher than Hive voting power I just distribute some 1% votes on hive that translate to 99% votes on Leo.
This way I can use up all my voting power on both.
Ps: I don’t know why but I can’t set the multiplier to 100 and that annoys me more than it should 😅

That's a good point and it makes sense. I prefer separating the accounts to curate differently, but the multiplier is a smart touch.

On one side you are right but on the other side there are other things to consider. Someone mentioned already the tribe token multiplier and there is also curators who read a lot of posts and vote. They could not do their work if they all vote with 100% all the time. So the 1% vote will lead into votes from the tribe or community. I vote between 11 and 23% most times on posts I like. When I curate I go way lower, except I really like the post, then I vote like I normally would vote.
I hope this explains it.
!ALIVE

Freedom of voting! Everyone can vote what he wants. I bet if we start complaining about the vote percentage people will either say, you are right and vote more, or they will simply stop voting and unfollow. I'm happy with any amount someone is willing to spend / vote.
By the way: I have forgotten curation trails where people set the percentage on x amount of the original vote percentage. This way it is possible that the vote would be 10 percent and if you have set it to 10% it's 10% of 10% which would be 1%. Imagine you are in a curation trail of someone in a curation trail. So there are many reasons why someone vote 1% and could be not even aware of it.

Hi @behiver
I have given you the 100% vote however the value is negligible. lol..
I think yes you are right that if a whale gives 1% vote, then good else this does not make any difference. Voting on comments is still fine but not for posts.

We all started from somewhere and we grow bigger and bigger. Keep it up!

The lowest I give is 10% for comments as I see no point otherwise. This is just me as I want to say thank you properly for commenting in the first place. 1% is not helping anyone unless you have millions of stake behind you.

Another thing to remember is that anything below 2c is counted as dust and the reward on the upvote is lost anyway.

If you're going to play with smaller upvotes, I'd recommend setting up @dustsweeper so those you're voting actually receive rewards.

The only reason I can think to do the 1% thing everywhere is to get your name out there as much as possible.

Playing the numbers game to put your face in front of those with stake.

Hoping they'll eventually come back and upvote your shit?

Is @dustsweeper still in action? I was using it a long time ago, but at some point, I think the service stopped working, and didn't revisit it.

I've been using it since we launched Threads because I upvote every thread I comment with a 5% vote.

In LEO terms, voting 5% on Threads works fine - But in HIVE terms, it can drop below the dust cut-off if my VP is low.

So Dustsweeper picks up the slack:

It generally doesn't matter much unless they have a lot of tribe tokens staked. Unfortunately, Hive isn't everything but I do agree that anything that is under the dust threshold doesn't make sense if you're aiming for Hive.