The Most Talk About Transfer Speculation 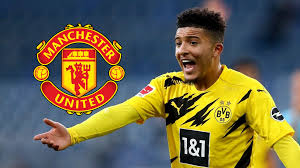 Jadon Sancho transfer to Manchester United after the club must be pursuing his signature for the past two previous seasons. Finally, the deal is done but he will join up with his teammates in the club after Euro 2020.

The likes of Marcus Rashford, Mason Greenwood all play for the England national team, and bringing the like of Jadon Sancho into the picture will just be perfect matchmaking. But the question that struck my mind, what will be the fate of Edison Cavani that still has a contract with the club till 2022. His arrival to Manchester United is unique no doubt but will Edison Cavani be stripped off the number 7 jersey for Jadon Sancho to wear it is where the question lies.

I wish him all the best in his England return and we should not forget he began his career in the Manchester City academy before he was sold to Borussia Dortmund for the region of £7 years ago but the club has profited a lot with the sale to Manchester United.

During my previous observation, I have to realize that majority of players from German clubs don't always live up to expectations when they arrive in England and that Is why I can not bank my money on Sancho to perform well but time will tell when the English Premier League kick-off next month.

Manchester City has also benefitted from the sale of Jadon Sancho to Manchester United for the region of £9 due to the release clause that was inserted in his deal at Borussia Dortmund.

We should not forget that he began his journey in Watford before he made his way to Manchester City for the region of €60000 in the early stage the age of 14 years and move to Borussia Dortmund at the age of 15, coming to Manchester United at the age of 21years, so he still has a lot of potentials at his disposal but now the transfer rate is £72.9m

Jadon Sancho is the much talked about man right now with every speculations Linking him to Manchester united,hope to him join the red side of Manchester

Congratulations @bennycage! You have completed the following achievement on the Hive blockchain and have been rewarded with new badge(s) :

Great signing from United with the young talented player. I hope he proves to be a great buy and let the hype weigh down his performance.

About the jersey no, Sancho should pick any other number as I don't see the jersey 7 worn by cavani to be given to him as that will be a big disrespect to Uruguayan

If the number 7 shirt will make hime put a great performance,then why but I wish all the best because the EPL is not child play.

Yeah but wouldn't be great creating enmity in dressing room upon arrival. Also wish him the best