Brave Browser Releases Its Own Swap

@bitcoinflood 75
about 1 month ago
LeoFinance 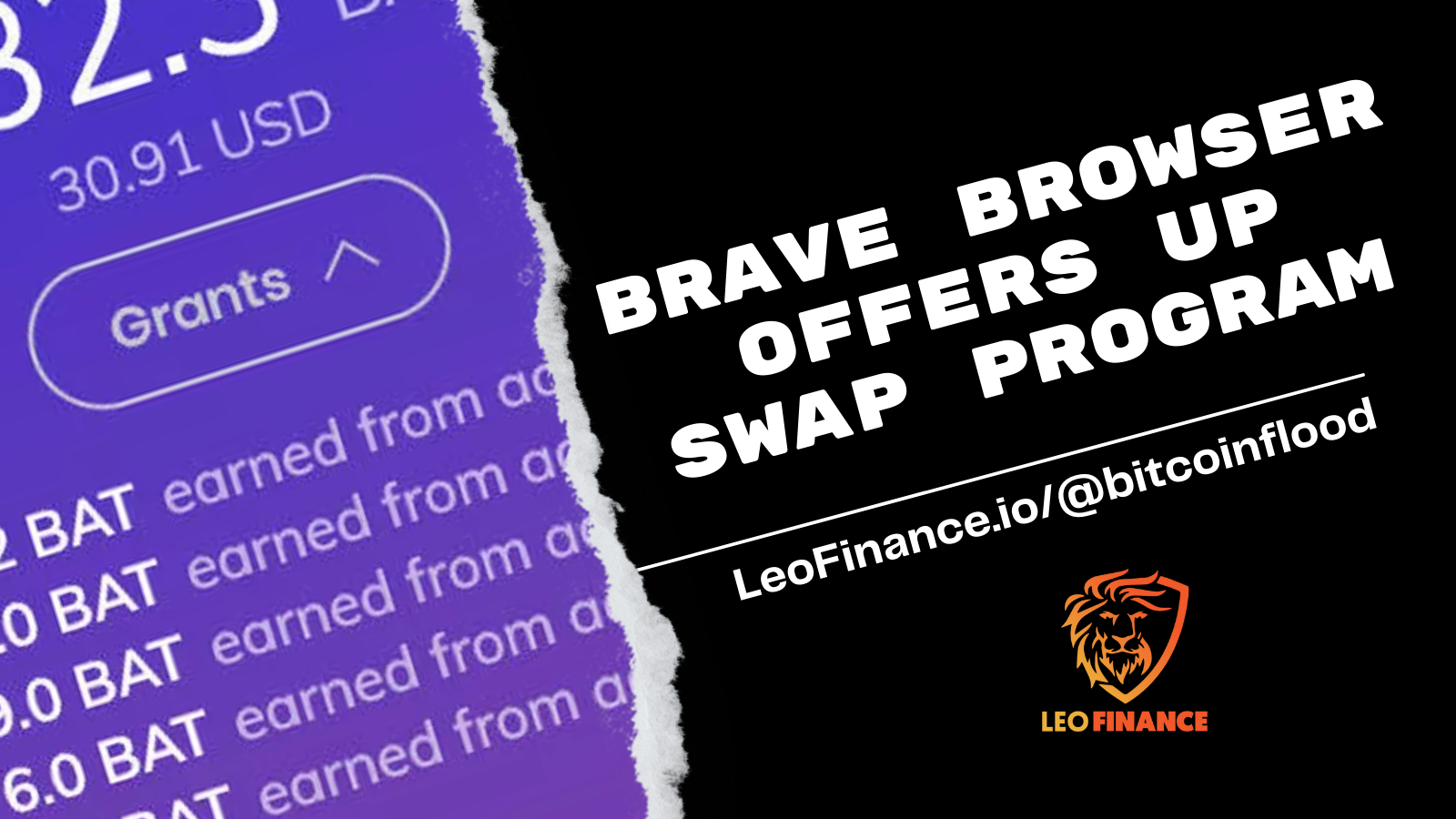 Brave Browser Releases Its Own Swap

Brave has really been taking off lately. I have ads enabled on mine and set to the max setting of ads per hour. I mean why not! They aren't that annoying and it's the only ads I really see thanks to its built in ad blocker. Plus those ads turn into crypto profits in BAT (Basic Attention Token) for triggering them.

Brave has a in house wallet which you can create, backup and store the keys for. However it was more of a dumping ground for BAT and that was it. Until this near feature rolls out called Swap Rewards Program.

This is how the wallet currently looks. I have to say it's one of the nicer and well organized UIs compared to most wallets including Hives YIKES! 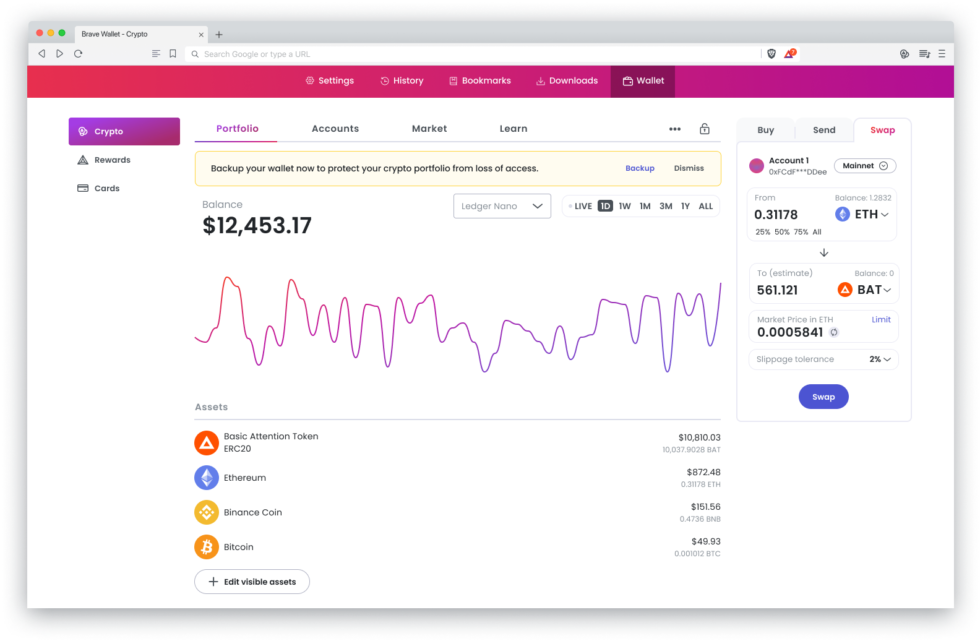 When released the new UI will include a new rewards tab that is currently not there. This rewards tabs is from watching ads, tips that come in etc. It's a way to keep track and organize how much you want to see. For myself I max this thing I want as many rewards as possible!

What's crazy is I started using Brave when it first came out because it's faster and smoother than Chrome. In fact Brave browser is built right off of Chrome as it's open source but Brave cuts out all the crap and gives you real things you need like always having https enabled, ad blocking, rewards for seeing brave ads and much more. 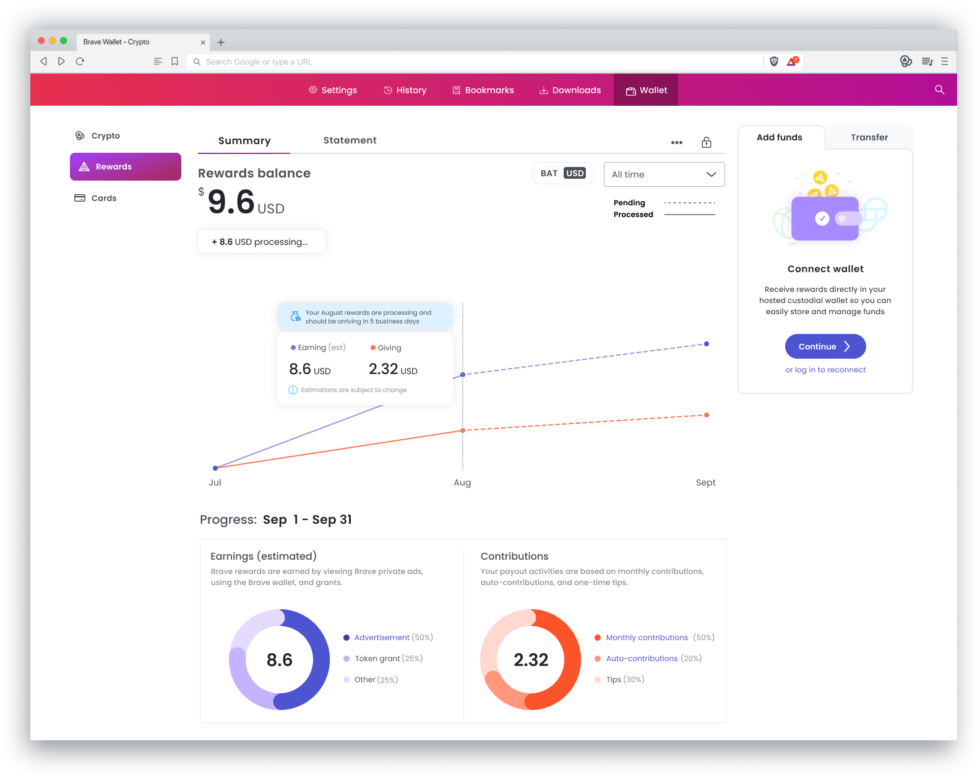 The swap program will be taking 20% fees I need to look into this more as this seems crazy high but I still think people will use it. Those fees will be divided up to those who support the swap platform within brave. It's possible that this could be a rather lucrative method for collecting more crypto within the Brave browser itself just from watching ads. We will be able to tell more once it goes live which should be within the next updated slated soon.

I’m a big fan of Brave. I’ve been using the browser for a few years. I was bummed when they had to remove ads from the IOS version due to Apple’s policies.

I once tipped myself BAT to reddit and I could never figure out how to cash it out. That was the bulk of my BAT so Im not happy. This was before uphold I think. It's still sitting there lol

Oh that is a nice little adition! I've been using Brave for a few months and I'm very satisfied

Well I like BAT but I found the entire process of withdrawing a bit too annoying. In the hopes of them making it easier in the future, I just basically continue to stack my BAT and haven't withdrawn. However 20% fees seems like a bit too large for my taste.

I’ve been using Brave a few months now and I am very happy with it. It’s dropping my BAT into my Uphold account. The whole thing is smooth.

That's the way to do it!
!BEER

Hey @jimmy.adames, here is a little bit of BEER from @bitcoinflood for you. Enjoy it!

Been using brave since it came out. BAT just makes it even better. I'm going to try out the swap feature later!

Thank you very much bro. I've been using Brave since more than a year now and I've never looked into the Wallet section XD I'll surely take a closer look now...

Hey @bitcoinflood, here is a little bit of BEER from @jimmy.adames for you. Enjoy it!

Hey @bitcoinflood, here is a little bit of BEER from @jimmy.adames for you. Enjoy it!