@bitcoinflood 78
over 1 year ago
LeoFinance 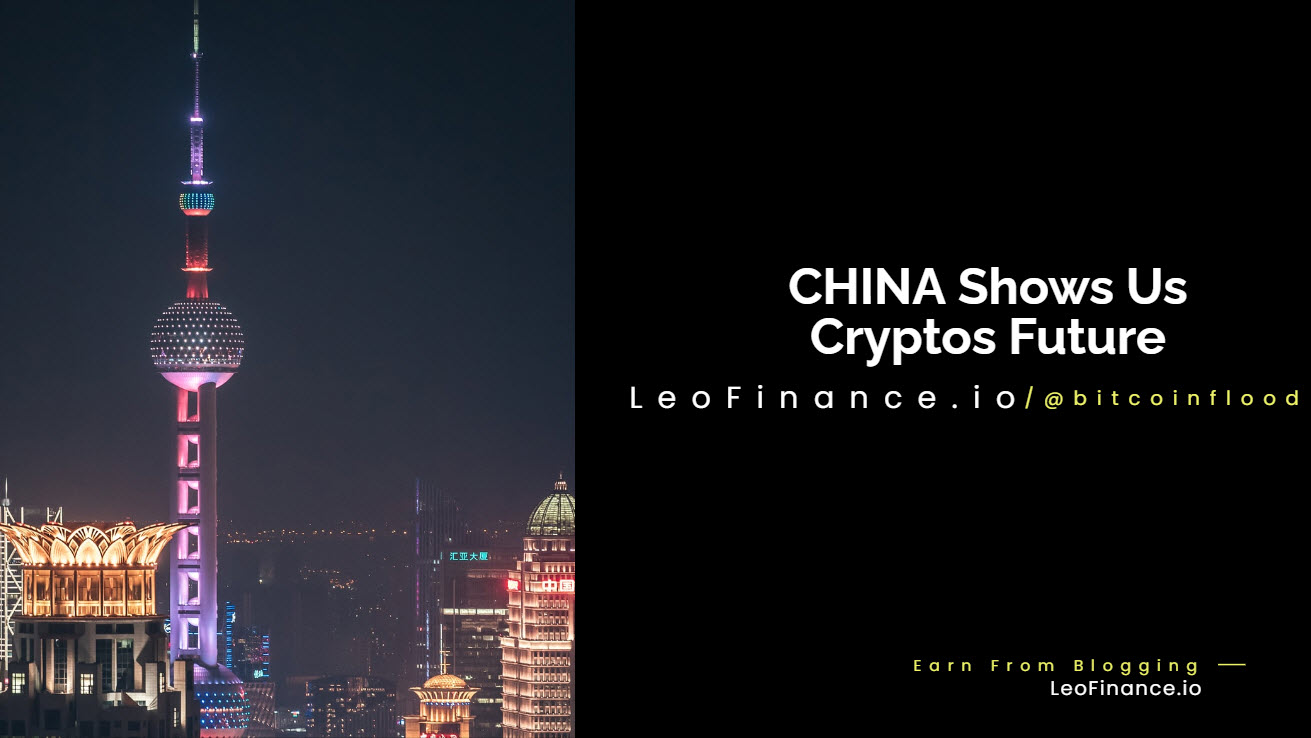 As much as we all despise China right now they clearly are showing us what the future will look like. However they of course want FULL control over it just like anything. That needing of control however is starting to bite them in the butt but that's an article for another day.

Today I want to go over the vision and how crypto will look a few years from now.

Crypto In A Few Years

China is all in on cryptocurrency! However they want full control as any communist country would. This is why we have seen them "ban" bitcoin from being minded and no longer traded between banks. This is because they want full control of their digital currency and for it to only be used within their country and not tied to anything else.

What does that mean?

You can pretty much inflate, deflate, inject or do whatever you want in terms of control your money if it's not connected to any outside means. This is exactly what China is doing full control and manipulation of their own digital currency that can be printed and reduced at will.

At least with physical money you had a little control as to holding on to it and having the price to print the new money however with digital all of that goes out the window.

Chinas Crypto Currency is a CLOSED Permission system NOT Permissionless

What we will see is more countries coming out with their own cryptocurrencies primarily communist countries at first followed up with other countries who will be cross boarder and world powers.

China banning bitcoin is actually a great thing. It localizes them which might be good in the short term but extremely damaging for the economy in the long term.

It now means money from around the world can be generated by every person from their computers except for China. It also means less countries are going to want to trade and deal with China. In fact trading with china has been falling in the last two years and expected for further fall as they continue to strike out against other countries with threats. I mean it's really a great way to shoot yourself in the foot and quickly make yourself not a world power any longer.

Make no mistake about it that EVERYTHING will become crypto and digital in terms of money. Remember movies such as The Fifth Element where you earned credits on your account. The future of economy will be done in such a way however it wont be decentralized.

A digital currency means easier to track, print, store etc. It's highly more efficient and allows for tracking along with many more advantages over paper currency.

Honestly for the most part we are digital when it comes to using credit cards and transferring money to banks. A digital currency just makes logical sense for the next step.

What most overlook is the shift to CBDC enables the government, any government, to bypass the central bank.

As much as we complain about the Fed, imagine monetary policy in the full control of Pelosi, McConnell, and AOC; and with programmable money at that.

Sorry I will take Powell any day.

Yeah a lot of countries will go the CBDC way no doubt, my hope is that by doing this, more people will realize what the cryptos offer and will opt in. CBDC’s will most likely offer the same amount of interest on savings as the fiat, by the time people realize that they can gain much more with real cryptos, I’m sure they will move.

My country has called digital assets a matter of freedom of expression, so unless there's a high bar of "harm" to cross before they can be banned. The tax laws around them are a bit onerous and I'm still working through it all.
I think CBDCs are a bigger issue for trade currencies like the USD, Pound and Euro. Already developed small countries can wait and see. Large or countries with a underdeveloped financial sector might act sooner too.

The lion of Asia will soon be flayed by its own interests.

At the end of it all, this excessive control by the economy will be his trigger.

It will be interesting to see. Tyrannical states can operate for a long time.

The key with China is that it is seeing its population (more of) getting wealthier over time. As they pull people out of poverty, which they are doing at a good pace, that tends to keep the people happy.

It is rather ironic that they are keep their people appeased by making their lives better unlike say the Soviet Union.

But they are benefits at a very high cost, in the soviet union it was nationalism and superiority, but sacrificing freedom and many other things.

Sadly, the State is the problem here. Or should I say 100 or so individuals hiding behind the apparatus of the State. We all become the bank sooner rather then later. People don’t hate China. It’s the State paranoia that the world doesn’t care for. In the end freedom wins.

In the end freedom wins.

I really don't understand why the mainstream media, let alone the supposedly pro-decentralisation crypto media, is so against China 'banning' Bitcoin.

They're an authoritarian government... Of course they are banning a permissionless, decentralised monetary system they can't control.

Why is this even news?

Bitcoin is literally designed to undermine authoritarian governments such as the CCP.

But by banning the decentralised Bitcoin at home, it will do nothing to discourage its growth and entrenchment throughout the rest of the world and eventually will come back to bite them.

Bitcoin is doing its job.

They like to talk a lot of stuff but all the news anymore isn't backed up by any facts it's just garbage to get people to read it. I guess people aren't entertained by real news anymore. But honestly I find it fascinating. Bitcoins dip in price is because miners needed to cash in to move all of their equipment. Won't be long till we see price and mining start to ramp up again.

Well I think any digital system is far superior to the existing financial system. So yes I think crypto will be the future and we just need to continue filling our bags.