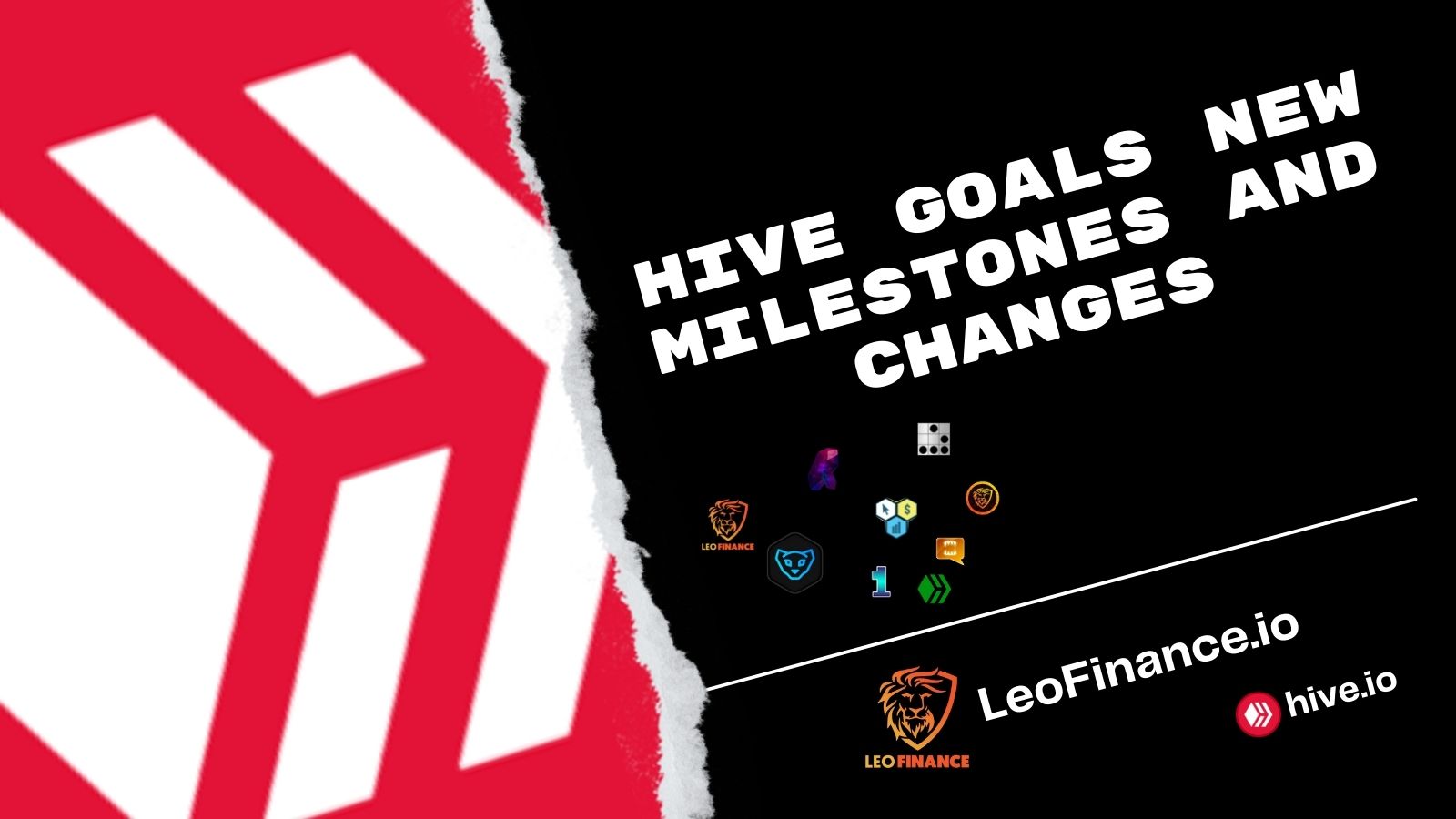 There's actully been a good amount of development happening over on LEO lately that's made me make a few new adjustments. I'll outline those below along with the goals. one of the most elusive goals at the moment is that SPS goal but I'm hoping that changes a bit here when SPS rewards start to lock in for Brawls, Ranked battles and so forth. Also DeFi liquidity pool aspects also factor in but are a little harder to track. Without any further delay lets jump into it.

Much slower increase in hive this week only pushing around 32 hive a day which really stagnated the growth even with doing some decent power ups of hive. Overall it was just a slow week rewards wise which is bound to happen from time to time. I'm getting a little iffy on if the Hive goal will be possible unless I focus solely on that but I feel that would be a mistake. Instead some of that value is now coming from other areas which I'll go over in the LEO DeFi section.

I've also added some of that Hive into vouchers liquidity pool to try and pull a little more SPS there and see what kind of value comes of it. For me personally when I add to these liquidity pools it's for the long haul and I pretty much write it off. Instead the focus profit wise turns to the payout of the other tokens it's pushing.

As you can see the hive earned or powered up per day was pretty flat and even across the board at about a 20 hive a day rate. I pushed some of that into DeFi pools. Also for the most part I'm saving all of my HBD which now is around $800 worth. At some point soon I'll most likely be pumping this much harder to start taking into that massive 20% APR.

LEO was almost the same a little lower in payouts over the last week so it was just overall a much lower payout week for posts which is normal. However I did land 10th in most activity which I dedicated a lot of time to curation of more posts with smaller votes and more quality comments. This won me a little bonus of LEO tokens thank you!

My daily number did shrink by 1 again so still progressing just not as quickly. Never the less it's still progress and progress is something we like. LEO will most likely be a shift for me here this week as I believe the next project (project blank) will release this year and with that a airdrop to LEO token holders is most likely in the cards(speculation). I want to be prepared for that.

LEO also changed CUBDeFi around a bit and because of that I made a change with hive and HBD and ended up injecting almost all earnings into those pools. To be honest the release of it kind of came out of left field for me so I wasn't prepared for the release much.

I felt it would be good to include this one into this report as I've been hitting the mailing pretty hard lately. Listnerds and CTP honestly have held their ground well and provided some decent income. At the moment I'm a little over 7k listnerd credits (which puts me in the top 50) and over 1,600 CTP on listnerds and closing in on 20k on CTPTalk itself.

To me this has been a great way to get a little extra exposure on one of my posts each week and for the most part it seems like a majority of the users there are involved with hive. This accounts for more follows a few more votes but really what I like is the more comments and it's a way for me to find people serious about hive and interacting with others which is what hive is mainly about since it's primarily a social blockchain in my opinion.

As predicted SPS value is slowly going up since the airdrop ended. I knew it wouldn't be anything crazy but the reduction in SPS liquid going out with the same demand for it would naturally mean the price should slowly tik upwards. I believe this will change even more come end of August or September when a new pack deck is released that should eat up 15 million in value of SPS. That should in theory push SPS back around the $0.10 mark.

For me right now the goal is still to get to 1 million SPS. While the stack is climbing I only really think I'll hit this goal if I'm able to stack Chaos packs and sell them for about $15 each once all sold out. The other chance would be land. With 142 plots of land 100 of them being a tract if land pushes back near $2,000 again I'll most likely sell the 42 plots and dump some of that into SPS which would drastically move me closer to my goal if not hit the goal. We are playing the long game here for now it's stacking season still.

Tough ask for Hive goal but yeah your Leo goal does look easy compared to former.

Big time, I know I have the LEO goal on lock down and honestly I want to even be above that now. However I feel much of that will end up coming from the DeFi platforms as the top 25 people seem to have treasure troves of LEO at the moment lol

Great progress on ListNerds! Good to see your posts showing up there! !CTP

I havnt done much with listnerds. I do go in every now and again and vote for things. I never really understood it though.

It's a nice little quick way to get some more exposure plus earn a little crypto on the side.

Inspiring milestones and I wonder how you tackle them at the same time... are you exchanging some for the others or building up in parallel on all these assets?

Some of it is in terms of the layer2 tokens I don't use but I pretty much stack everything. I haven't really sold any crypto for other crypto besides that. Most comes from DeFi rewards which luckly SPS is a part of and curation and writing. The investment the bulk of it happened 3-5 years ago and it's now paying well because of those investments.

You are still far from your hive goal but your splinterland strategy looking nice and you your Leo goal is close too. Inspiring