How Much HBD Do You Need?

@bitcoinflood 78
about 2 months ago
LeoFinance 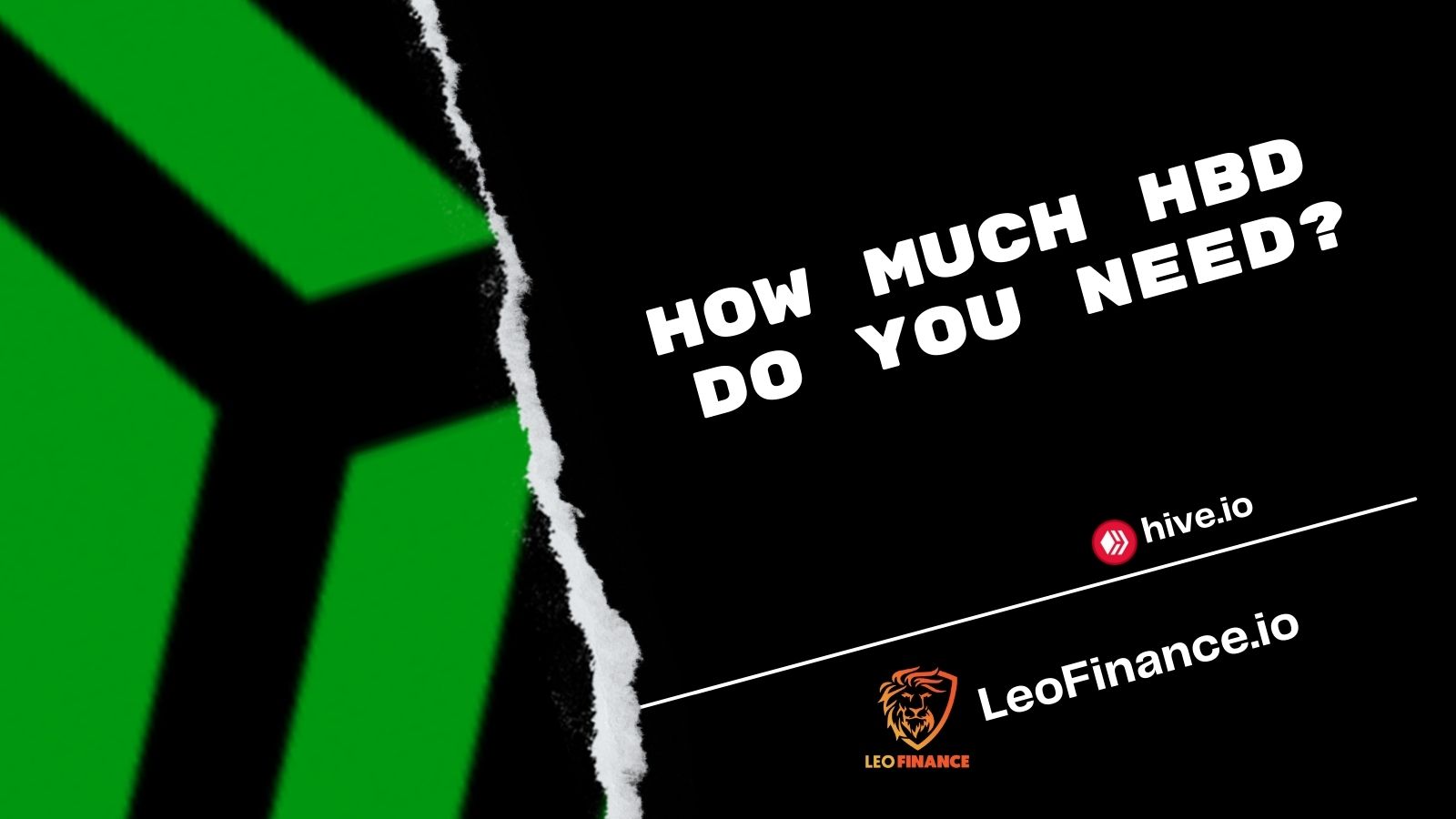 How Much HBD Do You Need?

Recently I've been running over a lot of numbers including risk vs reward. With the bear market in full swing and having been here for a while one of my main goals during this time is to be able to generate enough passive income to sustain myself through hive alone. While I have other assets outside of hive I figured focusing down on hive for these articles etc would be the best bet. While some of this gets into Binance and Polygon as well the core of it all is Hive and HBD.

My thoughts are if I'm able to do this during one of the worst bear markets ever then the bull market will be living the dream and the bear market that comes again I won't have to really worry about anything. While there's still management work with all of this. I'll still continue to post, fund and support hive because honestly I just enjoy being on the platform and helping hive and Leo grow. With that said I also want to start freeing up more time for other things and goals I have myself.

My ultimate goal is within the next 1-3 years to buy a new undeveloped plot of land and start from scratch. I want to test myself and say I built all of this myself with my own hands in the real world on my own plot. Mid life crisis or just something I would enjoy doing I'm not sure lol That's why building passive income streams are increasingly important for me so I have time and funds to take on a project such as this.

If you put 1,825 HBD into savings you'd earn 1 HBD per day at the current 20% APR rate. In most cases people gear towards making $100 a day in passive income which would mean you'd need roughly 100 HBD per day to make that happen. From the simple data above and some math we come out with this...

What if you stuck it into DeFi?

At the moment one of the best DeFi platforms for this match up in my opinion would be CubDeFi CubDeFi offers a number of Hive related Farms but more importantly they offer one called BHBD-BUSD which greatly minimizes risk and impermanent loss. At the time of writing this the Farm currently pays out almost 28% so let's round this down by a large amount to account for the pool growing and the APR falling to 25%.

The thing is you'll also get paid in CUB native token and it's been doing a good job at holding a pretty steady price the last few months. It might even increase in price which would make your 25% APR higher if you cashed it in at a higher rate. Of course there's higher risks involved with this type of investment over just holding and saving HBD which yes also has risks.

So how much HBD would you need in a DeFi pool to hit your goals? 5% might not sound like a lot but when you start to run the numbers it paints a much different picture.

If you took that same 182,500 HBD and put it into the CubDeFi pool at 25% you'd be looking at $125 a day. That's $25 more per day in income from putting it in the farm. Now remember this comes with increased risks. The price of CUB could go up and down and that will hurt or benefit your APR earnings in terms of passive income.

In order to hit $100 daily with the farm with the current numbers it would mean you'd need roughly 146,400 HBD in the farm.

As you can see earning passive income with crypto right now is just down right massive compared to what banks are offering you. That's because you're earning more at a banks rate and cutting out the middle man. So you in fact get at act more like the bank and take on the huge profits banks get from the money you dump into your savings account. This also accounts for those nasty credit cards you know those ones that charge you fees and on top of that massive APR rates that do nothing but get you further into debt. This is why if you reduce your expenses and live minimally you can start stacking and putting your crypto to work.

That's also a big note I want to mention here. Passive income with crypto is actully a rather new thing as of the last 3 years. It's brand spankin new in terms of the possibilities. There's also other methods to earning passive income on hive in previous articles I wrote about which I listed below.

I state that I'm not a technician and therefore I don't understand much, but mentally I find it hard to understand that a 20% interest rate seems to me to be an unsustainable action over time.

Thanks for the suggestion, I'll go take a look at it

I appreciate HBD quite much and my near goal is to get to 10 HBD per day by depositing it in the HBD Savings for a 20% APR. I love the stable nature of it which can help you navigate bear markets.

Few realize how big a 20% return is and how quickly accounts can grow at that pace.

$HBD is proving to be a nice choice in this rough market. And this is without much development associated with it.

Wait until we have things built out.

HBD put into savings is indeed one of the best ways to generate passive income on Hive. My goal is to stack as much of it to not only take advantage of the 20% APR but to also utilize it as a wealth preservation mechanism amidst the volatility of the markets.

This really is one of the safest ways to earn passive income. I mean it's all kept with your own keys

I like how your thinking. But, I stick my important savings in SBD. I'm good at defi yet. I feel like every time I try something I lose. But if you continue posting these type articles I'll feel more comfortable.

This is quite a high amount, but not impossible to achieve. I just started with 2000 HBD few days ago. If I can get to 5000 in 6 months, that would be amazing.

Of course there's higher risks involved with this type of investment over just holding and saving HBD which yes also has risks.

The above is what puts me off, thinking about investing huge crypto in coins that are not stable. For me, its not a great option long-term. The market can do crazy things before one blinks an eye. Thanks for this article @bitcoinflood