Splinterlands SPS Token Why It's Still Under Valued 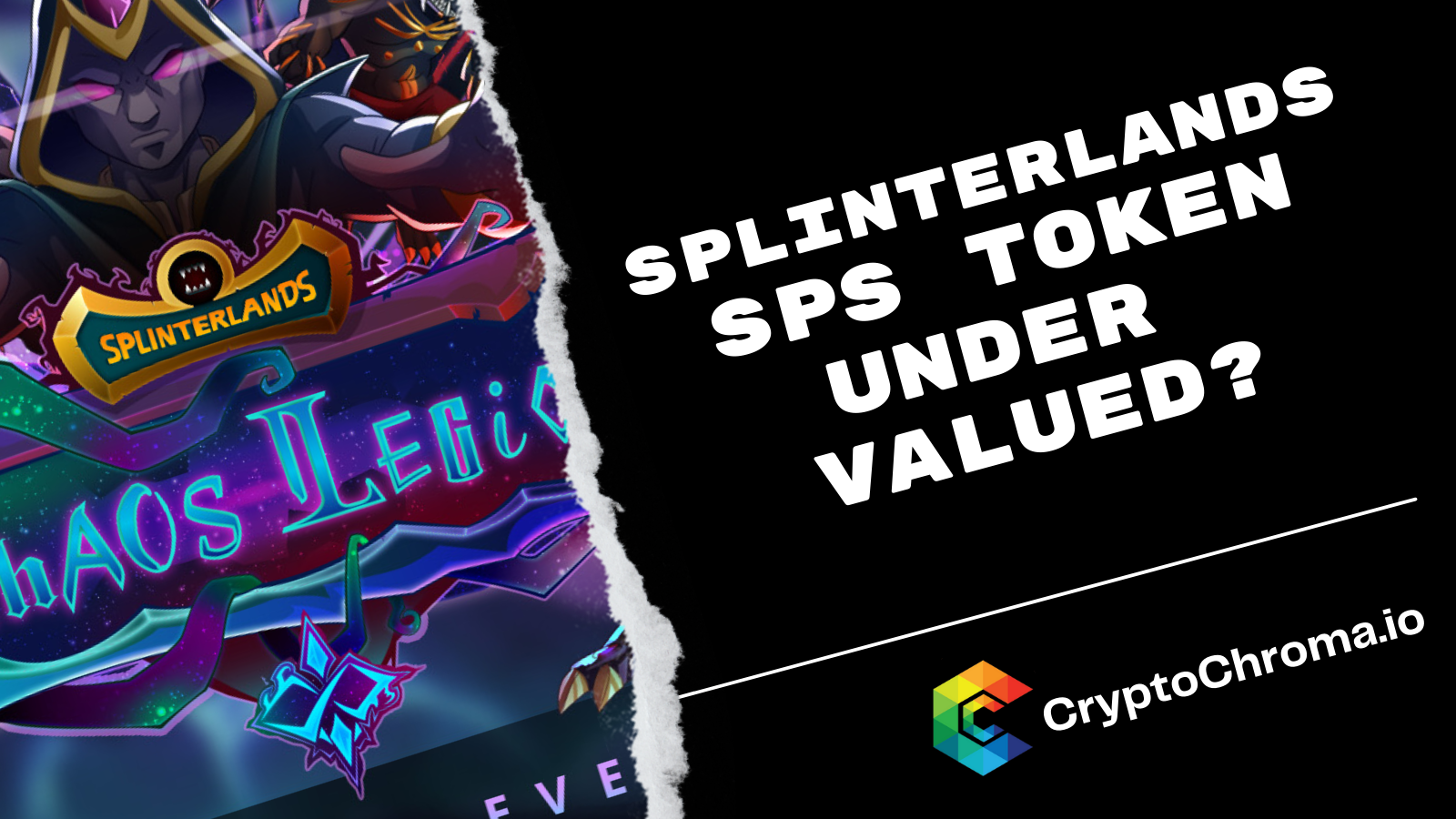 Splinterlands SPS Token Why It's Still Under Valued

SPS (Splintershards) are a the governance token of Splinterlands a game on the Hive Blockchain this is setting pace to outbeat Axie Infinity itself. As Axie continues to nerf their system Splinterlands still has much in terms of releases and developments all of which continue to provide value to the ecosystem.

Right now we are 83 days into the 365 day airdrop and what's about to happen is points are about to start being divided out heavily over the next 3 months. That's because Chaos packs are going live and with it means more and more airdrop points to be spread around and lots of them. This will cut down the amount of SPS going to accounts that don't constantly keep stacking value and being that we are less then 100 days into the airdrop I feel like this is going to be a heavy driving factor for packs and giving great value to them.

We currently see Dice packs going for $70+ and and Untamed packs going for just below that. That means vouchers very well could possibly go for $50+ each if not more being that they have unique values to them compared to normal packs. It's going to be interesting to watch how the prices fall for the first vouchers hitting the market and buy orders.

As far as I know these vouchers should also be tradable on Wax as well as Hive which could further increase their price. There's also talks about implementing more wallet gateways to Splinterlands further increasing it's exposure. All of this adds up to pressure on the Hive price as well as Splinterlands will need to buy and stake Hive in order to give the power out to new players.

The whitepaper is getting a bit of an update here soon as some of the features have not yet gone live to release SPS tokens. In fact we are just barely touching the amount of SPS tokens that were suppose to be released over half are still missing from things such as ranked battles and guild brawls.

DEC value has the potential to be much higher now as well. All SPS/DEC used will go towards payment to the Splinterlands team on Chaos packs however at some point in the next few months there will be DEC packs only called Riftwatchers. These packs will act like DICE and Orbs where all the DEC collected from these will be burned and the only way to buy them is with DEC.

Land still hasn't been released and there are only 150,000 plots. In fact a tract just sold on Wax marketplace for $706,000 Yep! Nearly a million bucks for some digital land lol This should just go to show you how valued this game is getting and that prices today could very well be a bargain come tomorrow.

We also know that land will produce items that can be used in battle and will have a cost to them. I'm unsure of any of the details on this however I suspect that needing summoners and monster cards to field on these plots of land will increase the value of cards but also that the spells etc crafted from these places will be tradable. I'm going to imagine as some type of token or NFT but that is yet unseen as to how it will take place. Overall it could be a great way to make passive crypto from the game but also to help win you some battles as well.

The Use Cases For SPS Tokens Will Grow

Now remember only some of the supply is currently going out for SPS tokens and there's still another half that hasn't been released that was expected to. If those come out the value of SPS could drop as there's more supply. The other thing to account for is over the next three months we will also most likely see a huge explosion in value because of new players being able to get in on the game.

Right now SPS only has a few use cases such as staking to near more SPS and soon to come 10% discount on pack buys from Chaos packs release.

There are other additions coming for SPS stake holders and the value looks to only be starting.

*This article is for entertainment purposes only and is not finical advise. Do your own research and understand the risks before investing.

There are other additions coming for SPS stake holders and the value looks to only be starting.

I agree with all your considerations! More use cases = more value (generally)
@tipu curate

Yep and what's really awesome is it's actully in a few DeFi projects so it has value from that as well. It's about the only game I know of that's on Pancake swap as a pool and CubDeFi. DEC token is also a part of CUBDeFi so there's going to be more and more use cases with that as well. Only getting started in my opinion. This will be the first time we see a real use case for holding SPS tokens.

I do admit that I am selling some of my SPS as it comes in to cover some basic expenses however I do see the long-term growth and possibilities that Splinterlands presents. I hope this platform and again keeps growing exponentially... I also only have three plots of land, perhaps one day I could sell them for a million each as well... lolz.

Dropping you some hot !PIZZA and !LUV on this post!

Honestly never a bad thing to take profits so don't ever feel wrong about that. I have a feeling there's a lot of room for growth still and what's really cool about Splinterlands is the amount of area it still has to grow. Axie on the other hand just feels stagnate the same old thing and now lowering of rewards. Splinterlands still has a massive growth record to go plus new features.

I agree with you that to keep growing, there has to be new innovation and change, that we must keep redeveloping and rediscovering new ways to use the underlying technology and assets to give them a greater value the long-term. 👍

SPS will definitely continue to have more use-cases, but they will need them as there is a lot more supply to come on the market over the next few years. That said, the possibilities for development on this game seem almost endless. The more card decks out there, the more complex the game becomes, and the more diverse the ways to battle are.

I DO hope the VOUCHERs don't get to be ridiculous as far as pricing. I can see them being pricey but $70? I think that's probably a little high. You have to remember that there are another 14 MILLION Chaos packs coming out after the pre-sale. Yes, you may miss out on one of the ultra-rare promo cards, but paying $75/pack for 100 packs? That's $7900 you could have spent just buying the cards you actually want from the market. Plus, if you sell your VOUCHERS, you could actually make money rather than spend it.

I think there will be some spikes but I can't see them going for much more than $20-$30. Hopefully less. $20 is still roughly $2500 to get 100 packs. There won't be too many people out there able to spend that, let alone willing.

If vouchers price is that high, I will just sell it to fund my purchases after the pre-sale. I don't know if I want to spend that much for the packs. In fact, I sold mine already and hopefully it is enough for me to buy a few hundred packs afterwards.

I can't bring myself to sell at these prices in fact I just bought a few. I feel it's too low. When you think long term you're getting an exclusive card, airdrops over the next 13 card rollouts and the possibility at 100k more airdrop points for claiming the title at 1,000 packs. That airdrop in itself holds massive value.

It's possible but I think it might also work out if I generate funds and buy in after the presale. By then I can claim in packs but only missing 1-2 airdrops.

whats the optimum time to purchase packs in regards to the card rollout airdrop?

Chaos Legion packs are out, and VOUCHER price is slowly going up... I remember my prediction for VOUCHER tokens when I was comparing CL with Untamed price (that was a bit over $40 at that moment) when I said that it will be around $25-$30, just to be a bit cheaper than Untamed packs on Hive-Engine... Well, we are there, and as you said, the price can go even higher...

I like the game, and I have earned by playing it more than I have ever imagined, but I don't like too much "locking" so many different assets in the game... It looks like a ticking bomb that waits to explode... So, things like Riftwatchers edition cards are kind of a need to BURN some of the assets and release the "pressure" and that's great to see that developers are thinking in that way... ;)

My gut feeling is telling me that SPS dumpers are gonna regret selling it.

Short term thinking there is a limited supply of them and this is only the first ever use case for them. Think about when the next pack gets released with vouchers and how much stacked value SPS tokens have.