It is time again for another Finance Friday/Friday Finance. This is a series I started where I talk about random bits of financial stuff that I have seen, gathered, or experienced during the week. I hope as a reader you find it informational, entertaining, or both. I also hope it can generate some good discussion and edify the Leo community.

Once again this will be a scheduled post written on Thursday, but burning up your news feed on Friday morning (for you EST folks). As you read this I am either on the road or sitting at my campsite in the Upper Peninsula of Michigan. Hopefully not sweating my butt off and avoiding all of the ticks that they say are out this year!

I know a lot of people are making Splinterlands posts right now. Everyone is sharing their end of season rewards and talking about how lucky (or unlucky) they were. I don't typically do that unless I snag something special, but I feel this time my rewards deserve at least a little blurb in Friday Finance. 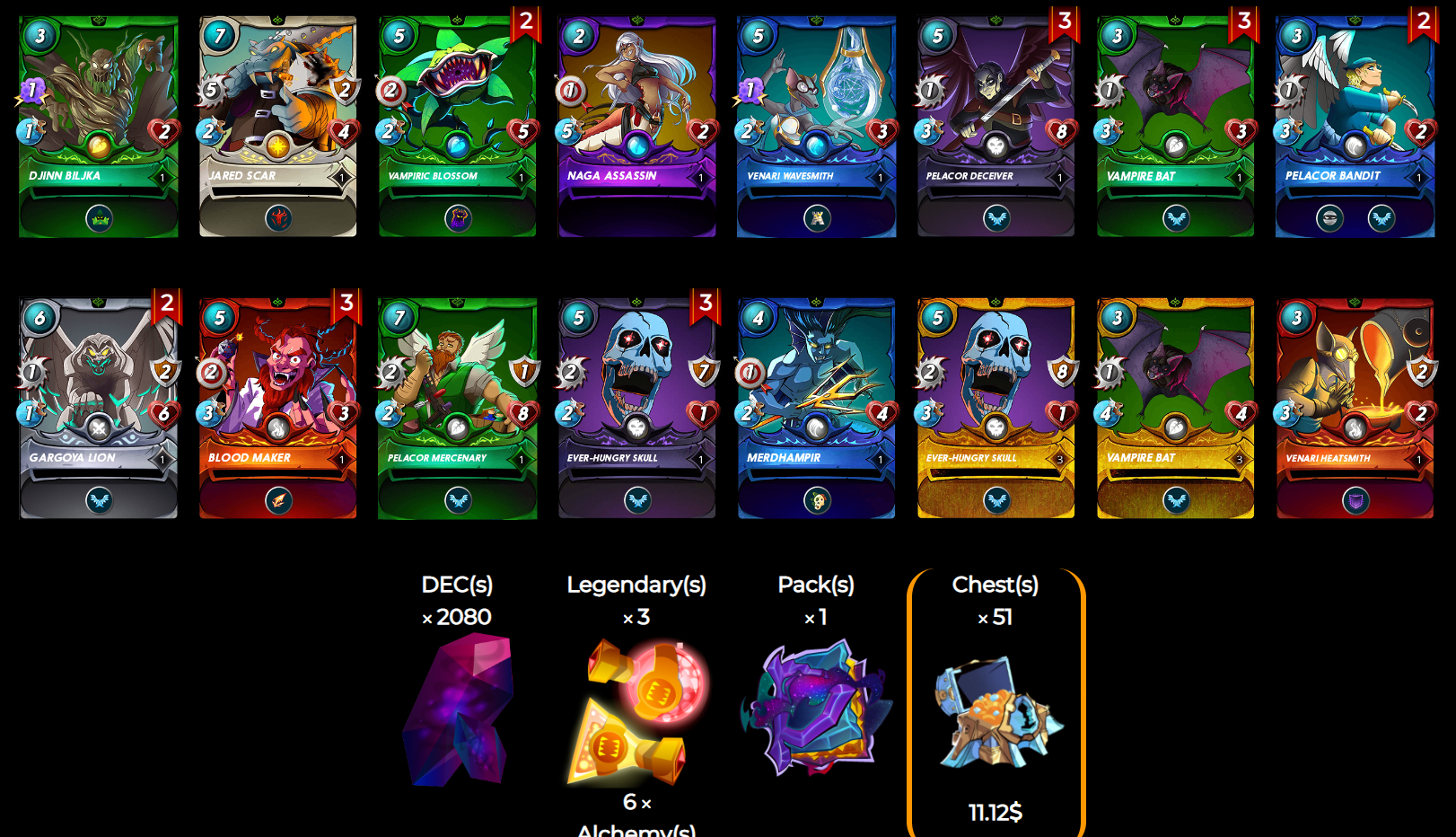 Most specifically because this was the first end of season where we got to see the new rewards system in play. I was able to pull about 51 chests through the past season which is 10 more than I have been averaging in the past. Those 51 chests were also Diamond level chests which isn't too bad.

Although my focus rewards have been pretty horrible lately, these EOS rewards were pretty darn good. I got two Legendary cards and two Gold Foil cards. Along with that, I also pulled in about 2000 DEC and some other stuff for a grand total of $11.

I am okay with that honestly. I know that prices are down right now, so that final $11 number can't really be trusted to tell you the true value of your rewards. I saw some people pulled in close to $50 in rewards if not more. Congrats to them!

I am going to adjust my strategy for next season and see if that pays off a little better for me. I am hoping I can double my number of chests but have them be at the gold level.

There were some really exciting things talked about in the Leo AMA this past week. I mentioned it in this post, but you should really go back and watch it yourself. Just be ready because I think it is three hours long. Khal, Scaredy, and Neal can talk forever when they get going!

What I found most exciting was the talk about "Threads" which will be the front runner of the much anticipated Project Blank. This micro blogging platform built on Hive has so much potential and the fact that we are just a couple steps away from it is really exciting.

I think there are a lot of people who are hoping Project Blank will be that one killer DAPP that drives users to our blockchain and really puts us on the map (not that Splinterlands hasn't already done that).

This is all I am going to say about the markets. We know they are down. Just keep doing what you do. They will recover.

Despite what you read above, I am honestly having a hard time being motivated today. I've been at my current job for close to 16 years (give or take) and I just found out today that a couple individuals who they just hired at the same c-level (for lack of a better term) are starting at $10K USD more than my current salary.

It's kind of a punch in the gut. It just goes to show you that loyalty is not rewarded these days like it used to be in the past. Needless to say, I am going to be having a pointed conversation with my supervisor at some point in the next couple of months. I honestly don't expect it to change much of anything.

I am in a bit of a spot though. With only about 4 years left until I can retire, I am not sure changing jobs is something I really want to do right now. On the other hand, I have a feeling suddenly bumping my salary to where it should be is going to draw attention that the board would rather avoid.

I'm not claiming to be a rockstar in my job. I know there are a lot of areas I probably fall short and things I could do better, but this whole thing is just kind of depressing...

Sorry to leave you with such somber thought. If it makes you feel better, I am probably living my best life right now drinking whiskey around a campfire. I will be fine... really!

It's still better to rent than play, nothing has changed (yet).

The rewards themselves aren't that bad and I think the old CP strategy is dead. I did look at the market earlier today and rentals might still be profitable but it's only like 15-30% APR or so. It still counts but the number of cards that I plan on renting out will be a lot lower as most cards don't have very good value.

That is a sucker punch the way these games with salary are played!! I will get my first end of season rewards on Splinterlands soon, just 2 chests so far. I hope I can ramp it up later today.

I hate to say that loyalty is not rewarded. I spent 10 years at my last company knwoing how underpaid I was. I had many conversation about it and strong armed them for an additional $10K which is nothing for them. I took a new job for 40% more a few week later. I told my bosses what the offer was and it was more than they were making. $ out of the 13 people I was very close with left within a month of me leaving after we talked about the markets. My old companies lack to care for use cost them almost an entire department.

Wow, that is crazy! It sounds like you made a really smart move!

Been tough to leave all my friends at my last place, but figuring it out. The work is a bit crazier so I guess they are making sure they get the value out of me.

I can imagine it is quite the change. It sounds like it keeps you busy though, so that is good.