BROFi - stats and APR for all tokens.

@brofund 70
about 1 month ago
LeoFinance

A very good morning to everyone , hope you all are doing good .

It has been a while since we talked about @brofi and the APR , let us check it out today .

For those who don't know what BroFi is -

BROFI is hive's very own on-chain DEFI project where you can earn BRO for delegating either Hive, or your tribe tokens to @brofi. There is zero risk to this because of DPOS. You will always own your tokens, you will never send any into us, only delegate them to us, and you can remove that at any time if you aren't happy or have something else you want to do with them.

Well the amount of BRO sent out has been decreasing but not a big drop .

Number of users who are receiving BRO daily

But has the number of users decreased? NO.

It is increasing day by day and on 13th it was the highest - 412 users received BRO from @brofi .

That is because sometimes users might have delegated very less token to @brofi and the minimum payment of 0.001 BRO isn't qualified for that , so my suggestion is to have sufficient delegation to ensure daily payments.

Before going to the chart you should know this -

So how is the pool position decided ?

Coming to the tokens -

What does this actually tell us ?

This tells us that 679.3 BRO has been sent out by @brofi to users who have delegated HIVE .

170.6 BRO has been sent out by @brofi to users who have delegated LEO .

Hive is in the first position in pool so it has received the most BRO .

So it is good to delegate HIVE ? Yeah but the APR changes by token to token and here is the APR for each token delegated to BRO -

Although CINE hasn't received as much BRO as HIVE, LEO or STEM - it has the highest APR .

How is this calculated ? It is based on the recent payout ,

Using this we have all the quantity in HIVE which allows to calculate APR but note that the APR values might change drastically based on price of the tokens / price of BRO .

Users who received most BRO

@nuthman has received 225.6 BRO for his Hive delegation .

Note: This data is from June 1st till September 13th. 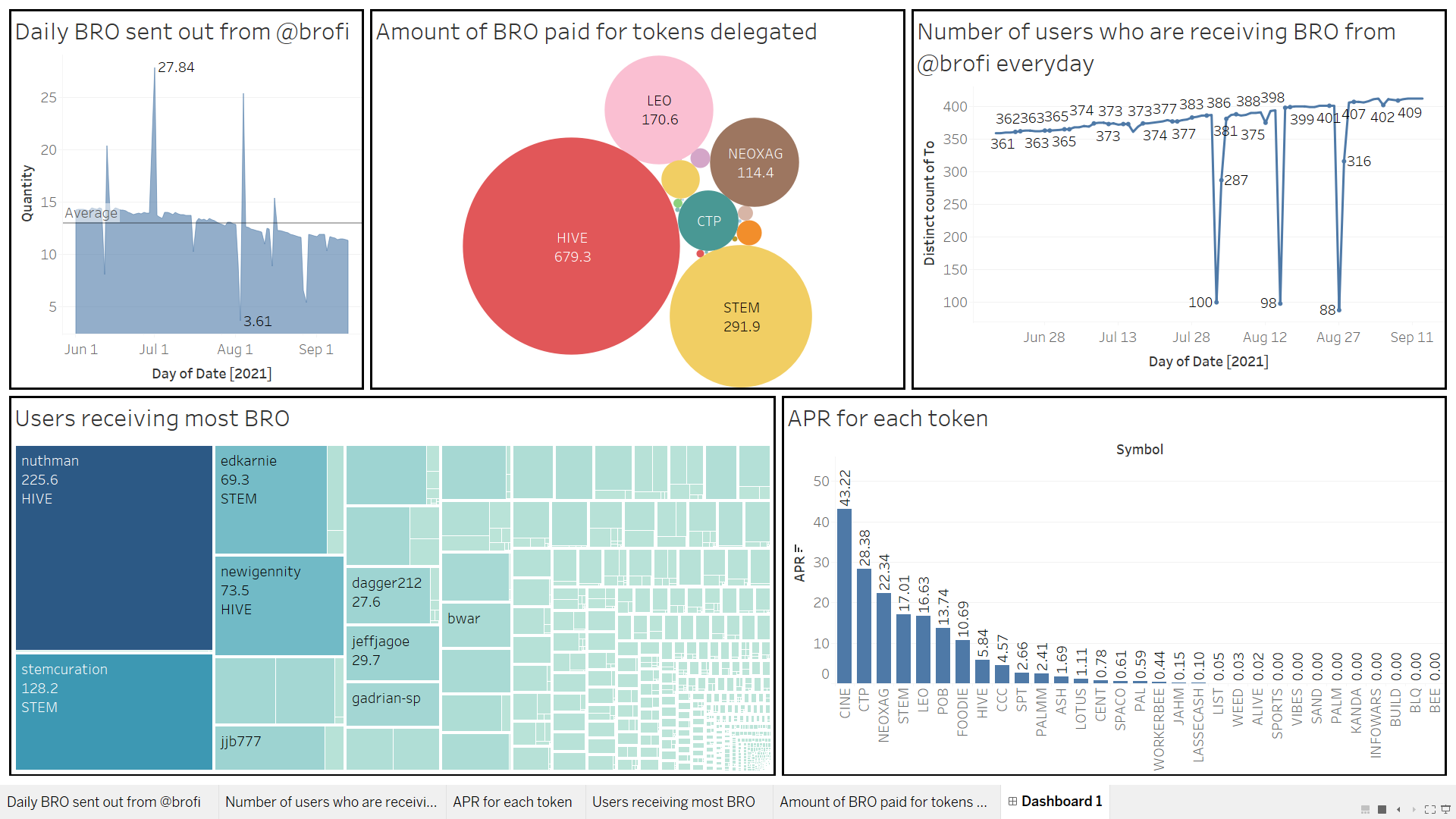 That's it from me today.

Those are some nice juiciy thicc stats.

@brofund! I sent you a slice of $PIZZA on behalf of @gillianpearce.

Ah, I've been wondering that! Thanks for sharing this data

Did you know Pizzabot speaks Spanish if you use the command ESPIZZA? (1/20)

Looks interesting! See you in discord