Every passing day you can't have enough of learning about new stuff and getting into new emerging projects that looks promising have the potential to surpass our expectations! If you're writing about Play2Earn, NFT's or blockchain games and not using the #oneup tag, you're missing on a LOT!

In addition to getting rewarded 1UP tokens for using the tag and receiving upvoted,
you're also being rewarded by engaging in the comments thanks to @engage1up, of course by using the 1UP front end. Top 10 most engaging members are generously rewarded as mentionned here

Besides, Don't sleep on the contests run by @dynamicrypto!

I want to catch your attention to the Diesel Pool, this is my current standing:

Why I do believe SWAP.HIVE:ONEUP pair is the Best pool to get into:

ONEUP:SPT pair is perfect for:

How to get into the diesel pool? : Check my Tutorial This project run by @chronocrypto started earlier this year and I do consider it one of the best projects for passive incomes.
This man is always on the lookout of new project to get in and I'm quite excited for the latest collaboration he did with #PGM (more on that later).

By holding UTOPIS, you're promised 60% ROI (according to the latest post) in HIVE and H.E Tokens (10% more by staking UTOPIS) paid on Monday: 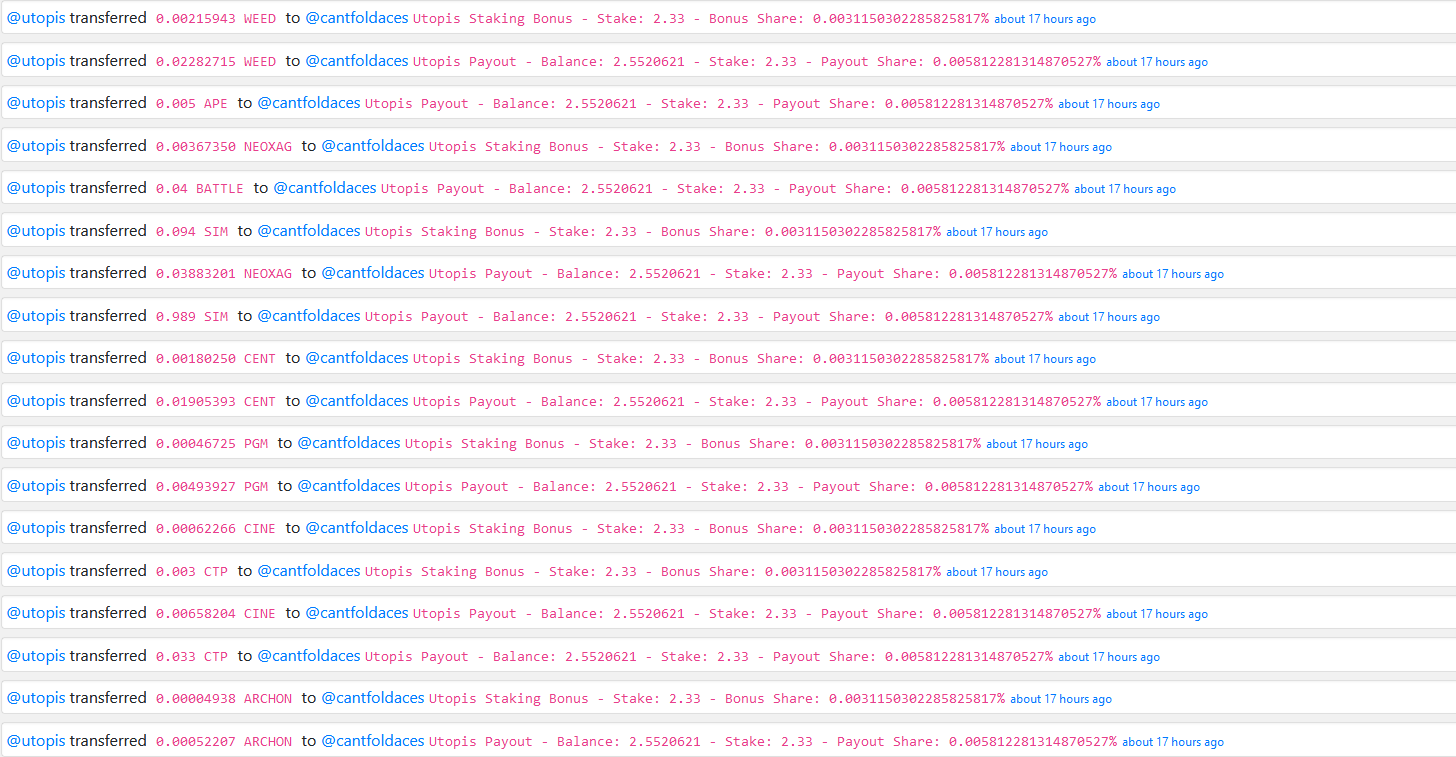 How does he get those juicy divs for us fellow UTOPIS holders:

There is no better way than getting into a project at it earlier days! #PGM is created by @zottone444 and focus on blockchain gaming contents, currently trading at 0.2 Hive/PGM.

Let's see what are the benefits of being involved with PGM:

There are hints on the future goals of PGM so if it comes live expect a significant demand for this token:

That's why I was pretty excited with the recent Collaboration between UTOPIS, PGM and CCH (gotta look more into it).

If there are some other of passive income projects/new ones please let me know and I'll gladly look for them! Have a nice day!

Nice work good stuff gaming on hive sure is growing at a nice rate.

It is indeed! and hope UTOPIS will grow at the same rate!
Looking forward to the incoming news!

Friend, if you want to be a curator come to discord and I'll explain how to do it :)

I am there, have just been very ill this past week and just now feeling better!

@dynamicrypto get well soon man and glad you're on the road of the recovery!

I miss finding your comments everywhere I go :p

lol will be back full steam soon enough!

Beautiful post you pralto very well all the projects, obviously I can 100% confirm what you said, written in a perfect way and easy to understand for everyone, even for those who do not understand English very well, I did not have the need of the translator. I really liked the fact that you pushed on the contests and that you took care of the graphics of the words by putting a little bit in bold with the links etc. Really good work. I hope this post goes very well, I in my small way will try to make it jars in all ways :)

@zottonetoken 44
2 months ago
Hi, your post has received PGM token, thank @zottone444 who has enhanced your post

Thanks for the kind words zottone and glad it comes to your liking!

I tried to get it simple without going through much details while highlighting the essential part of the project, making it appealing for the readers.

You have done a really great job congratulations, these are the posts that I always want to see from PGM users

Sorry, you need more staked ALIVE tokens in order to use this service, the minimum is 1000 ALIVE Power.

@misterengagement 57
2 months ago
There has already been too much ENGAGE today.
0
0
0.000
Reply

Great post. PGM sounds very exciting. I'm going to go pick some up now and try to learn more about it. !PIZZA

Cool I always love learning on your posts. I actually decided to stop blogging, but I will be looking into some of these things and possibly getting some Pgm and possibly some others as I like the idea of supporting good content creators
!PIZZA

Thanks infinitytcg and glad I could help! The kind of comments encourages me to provide even better contents in the future!

I actually decided to stop blogging

I do believe you can make even better blog posts than I do.

There is no better or worse. Yeah I just took a big step back because of an issue in splinderlands discord and I didn't want people to think it was a marketing stunt or anything so I just disconnected, but recently joined Neoxian groups page and now I thought of a pretty interesting topic, but I don't want to force anything and feel like I sellout so I'm just trying to really think about what I wish to publish and talk about.

I'm sorry about what happening but I'm glad I found out you wrote a blog post so imma read it! You have been manually curated by @skylinebuds on behalf of the 1up.zone curation team. Curating all original quality #play2earn content.
You can come hang out in Discord and Share and Talk #play2earn and #NFTs