Last time I posted about my Rising Star status, I was just about to hit level 60.

Well in the last month plus since that post I've now made it up to level 77 and have formed my band as of TODAY! 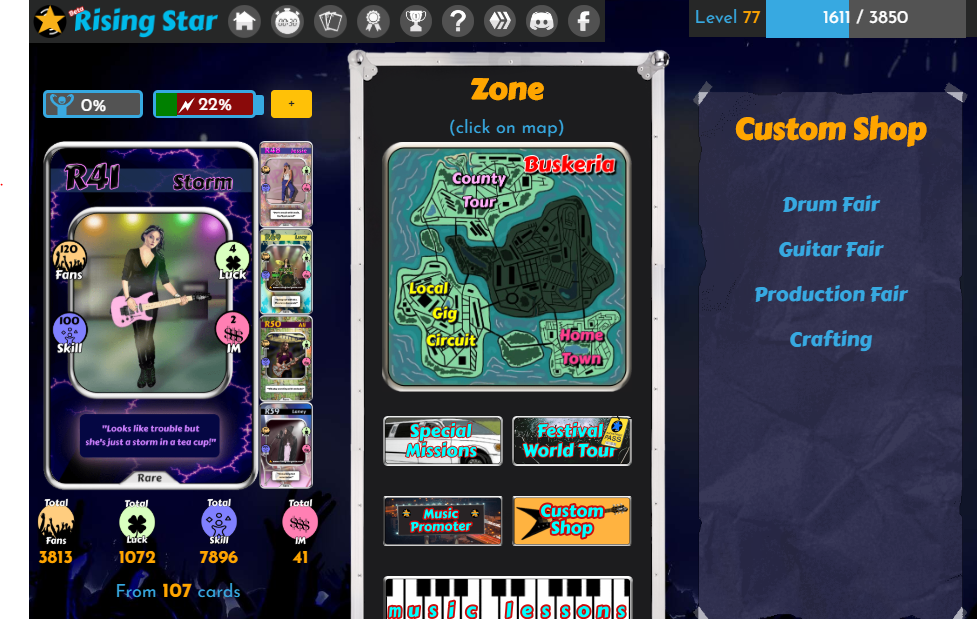 Getting the Band Together

I have decided to go with an all girl band and have named them "The Lil' Devas".

For my front woman, I have Storm on lead guitar. As I've said a few times now, she just looks like my kind of girl. I know you are thinking, "a guitarist for the lead", hey... she is just that good.

On lead vocals I've put Jessie. Don't tell her, but she is on thin ice. Too many nights partying and not learning the lyrics. She sounds a bit whiny sometimes too so don't be surprised if she doesn't get replaced.

Lucy is on the drums, but that poor thing clearly needs a drum upgrade. Might be time to go hit the custom show and build some a nice set of custom drums for her.

Finally I have Loney pulling double duty working the mixer and doing backup vocals. Put her at lead vocals, but she sounds too much like a man. Not going to cut it for The Lil' Devas.

I was pretty grumpy during the Band Rehearsals. I had nearly 19 rehearsals in and only two band members, than bam bam! Back to back successful missions.

I had not seen what the gigs were in the Country Tour and I have to admit I was a little disappointed.

I'd expected a significant increase in earnings at the next level, but that doesn't seem to be the case on first review. The big gig in Country Tour pays about the same as the big gig in local.

One difference is that it seems like you may not gain as much ego in Country Tour, which would be a big advantage long term.

But it will also take a lot more gigs and a lot more fans before I can do much of anything in the Country Tour stage. So...

I'm still to low of a level to do any of the Country Tour gigs, so I will go back to running a more or less max #starbits strategy. That means doing my Starbits millionaire gig, maybe a music leason and then 3 or 4 Local Mini Tour Support gigs.

I hope everyone is out there getting their gigs in and working towards Mega Stardom.

Yes at one time I was little. I was never a girl though.

Lol... I clicked on your profile and see your name is Deva. Hahaha... not sure if that is your real name, but if so I can see that would have been tough in grade school. !LUV

@captaincryptic, sorry! You need more $LUV to use this command.

More $LUV is available from Hive-Engine or Tribaldex

Yes that is my name.

Your making good progress. I suggest getting a decent supply of petrol cans before you do the first mission on the 3rd map. Of course, you still got to drag yourself through the band auditions later.

So tell me about the cans. Do they get used up/consumed? Or are they only good for one use per day?

From what I heard, they are never consumed but you need more cans as you want to do the future missions.

I was pretty grumpy during the Band Rehearsals

I'm feeling the same in the Manager Audition. I've put off doing it for months as the memory of the struggle to form a band still lingers. It took me 20 goes. 😂

So far I've done 6 Manager Interviews with no luck.

Have fun creating with "The Lil' Devas". 😁

Maybe they could do with a !PIZZA break?

@captaincryptic! I sent you a slice of $PIZZA on behalf of @gillianpearce.

Thanks, I had heard horror stories from @mimismartypants and others about how long it took them and when I was nearing 20 tries and only 1/2 the band I was starting to worry I was headed for 40+.

I was starting to worry I was headed for 40+

It maybe a bit premature but I'm worried about that with the Manager Interview. 😂

@captaincryptic, sorry! You need more $LUV to use this command.

More $LUV is available from Hive-Engine or Tribaldex

@gillianpearce! I sent you a slice of $PIZZA on behalf of @captaincryptic.

This post gives you one entry into the weekly prize draw to win a Rising Star Card Pack.
Post original high quality posts once a day and use the #risingstar tag to get more entries.

@captaincryptic! I sent you a slice of $PIZZA on behalf of @risingstargame.

Hey @captaincryptic, here is a little bit of BEER from @risingstargame for you. Enjoy it!

@hivehabits! I sent you a slice of $PIZZA on behalf of @captaincryptic.