It seems as if the game theory of Bitcoin is starting to take hold in the US, politicians are already tripping over themselves Larping to get into bitcoiners good books in Texas and Miami, who have both become bitcoin friendly states. Wyoming has also made strides trying to integrate bitcoin into their local economy and banking system and now it looks like Arizona wants to upstage all of them with quite the announcement.

It was made clear that Wendy Rogers Arizona State Senator has put forward a bill to make bitcoin legal tender in the state. The bill specifically states that it refers only to “Bitcoin” rather than cryptocurrency as it seems that bitcoin is the only currency actually recognized by state officials, as we saw with El Salvador.

You really only get one chance to pull this stunt and supporting shitcoins could get you seriously burned, whereas bitcoin which is not an unregistered security and is digital property is a much safer bet.

It is by no means foolproof but as far as laws go, it should allow bitcoin companies to come in and build out the infrastructure rather than let governments do it, as we saw with El Salvador and the Chivo wallet. 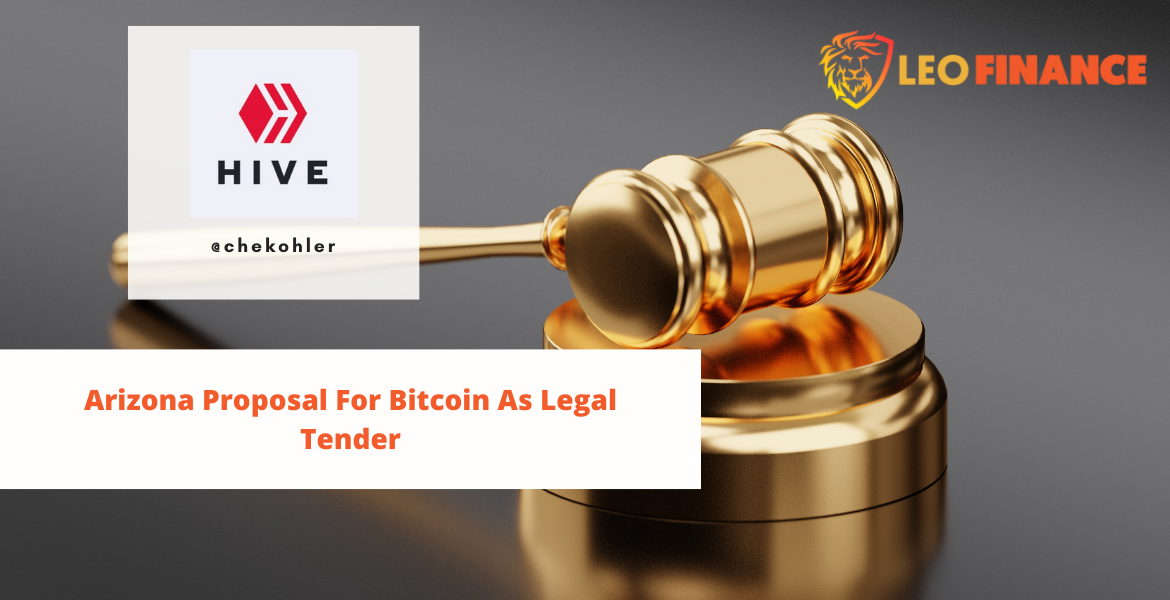 It appears that a bill has been put forward in Arizona to make #bitcoin legal tender within the state. https://t.co/tdYS7TVagP (h/t @crmykins) pic.twitter.com/v1CDZ3zI5M

As one domino falls, the rest tend to follow pretty quickly and we're starting to hear rumors of imilar intentions are coming out of Texas. Governor candidate Huffines said he will try and make bitcoin legal tender in his state if he wins the election.

“Texas must stop the federal government from shutting down the industry and discriminating against Bitcoin holders.” - He has stated.

I think with rampant inflation hitting the US, it gives politicians a chance to run on a financial platform using Bitcoin as the tool to gain votes and support. Make no mistake this is not a bitcoin thing, this is a political game where they will use anything to get ahead of one another.

The thing they don't realize is they're advocating for something that makes them obsolete in a few years as it gets adopted, but that's how powerful the game theory of bitcoin really is and why it cannot be stopped.

The development is sure interesting. It's just not clear to me how countries and governments will adopt and regulate crypto. As I have understood it in El Salvador, the government actually controls everyone's keys and I would say that's very unfortunate.

I think for crypto, most of them will be deemed securities since they all fail the Howey test apart from bitcoin, and the fact that all cryptos are only distributed ledgers but not decentralised protocals, they will be forced to abide by securites laws

As for Bitcoin, it remains to be seen, each country will have to play off against one another to create the most attractive regulations so that bitcoiners would want to come there and invest, as they will be a new wealthy class.

With regard to El Salvador, they have their own state holdings which was converted from local dollar reserves and bond issuances into bitcoin. They are using a company IBEX Macado who run their government wallet, the Chivo wallet and Strike is also available in the country. Both options are custodial in nature, but you can send your funds to a non-custodial wallet.

The government does own a set of keys to the bitcoin held in chivo, while Strike's I don't know who the custody provider is, regardless, it's up to the citizen if they want to take control of their funds or not, as is the case with most bitcoin holders in other countries, you can choose to leave it with an exchange and take on third party risk, or hold your keys

I would agree it's not ideal but new options are coming to make it easier, lightning wallets are improving and once check template verify and eltoo roll out on bitcoin its going to make it far cheaper to and easier to use bitcoin non-custodial at scale and swap between layers like lightning, liquid and the base chain

As for Bitcoin, it remains to be seen, each country will have to play off against one another to create the most attractive regulations so that bitcoiners would want to come there and invest, as they will be a new wealthy class.

Attractive regulations, well I don't think Sweden will be part of that competition. The government already controls so much here, it's not the right climate for crypto really.

Thank you for your elaboration on El Salvador, I wasn't aware of all of the details.

I am no expert on Sweden but I've spoken to some Swedish bitcoiners, just seems like most people there don't really realize the effects of inflation yet, yes they complain about the large taxes but believe in government subsidies provided in the various programs. Citizens don't realize how low-interest rates erode the economy yet, and there's not really a problem with financial inclusion. I guess it's sort of a blessing not having to worry as a citizen yet, as for those of us in developing countries, you don't need to explain it, you see your money lose value each month and starvation is a powerful motivator.

As for physical climate, Sweden is great for bitcoin, the cooler the place the more economic sense bitcoin mining makes, both from a home mining and industrial mining perspective. But I've seen Sweden has called for banning bitcoin mining even though they are 0.4% of all Bitcoin mining globally,

just seems like most people there don't really realize the effects of inflation yet, yes they complain about the large taxes but believe in government subsidies provided in the various programs.

This is very true.

as for those of us in developing countries, you don't need to explain it, you see your money lose value each month and starvation is a powerful motivator.

That must be such a challenge and at the same time a wake-up call. As you say, here people don't really worry. Yes, now people are starting to worry a bit about increasing interest rates on their mortgages but there's still a strong belief in general in our existing political and financial system here.

As for physical climate, Sweden is great for bitcoin, the cooler the place the more economic sense bitcoin mining makes

Yes, I'm aware of this. Especially the climate in northern Sweden is great for that. Regarding the call for a ban, yes that's actually one of my former bosses who is behind that...feels like a former life for me.

I guess it's a good problem to have, we all want less worries and I don't blame people for not caring, especially when they are enjoying stability or advocating for the status quo if they're benefitting from it, that's human nature. I think there will be quite the sea change and many will be blind sided, like any wealth transfer their will be winners and losers, and those with the least to lose in the current system are more inclined to move to a new one.

It will be a fascinating next decade watching this all unfold, perhaps I am biased because I have skin in the new system

Oh the irony, clearly you had to get away from them, then as its a divergence of thinking, let them play their games, they will be made irrelevant as people slowly start to understand the value of bitcoin and having a money no one can take from you

Oh and as for adoption, it looks like Tonga will be next, the bill is in the works and they are aiming for November 2022

advocating for something that makes them obsolete in a few years

I look forward to that day, I have nothing nice to say about them cockroaches!

Me neither, all thieves with fancy titles in my opinion, but democracy is what the mob has decided on, I can't fight against that, I can only protect my wealth by holding bitcoin

I wonder if this is a classic problem-reaction-solution type situation. They decimated the world economy and now ushering bitcoin that fast? Seems fishy to me, even though I own some good bitcoin I’m skeptical.

I have no idea, nor do I know much about American politics, but I mean since the Dems are getting blamed for inflation after printing the most biden bucks by % increase and the amount I think the red states are trying to use it as a platform. I don't think they really care that much about bitcoin, but with so much capital flowing into it, its a good platform to run not only for better financial products but also it brings jobs into those states

Yeah that’s true as well. Biden bucks hahah nice I’ll have to use that when talking to my dad he will get a kick out of that.

Trying to move from a blue state to a red state right now sucks! Fucking prices are insane lol. I guess everyone is trying to escape the hell hole that are dem states

He truly took the spray and pray approach to every issue thus far.

Didn't you just move recently? On the move again?

I've seen talk of US housing prices it looks gross, well if I compare it to what we have here and our earning potential, lol can't say for the average American but WHO CAN AFFORD that shit? I saw a video the other day people buying dilapidated housing for insane prices, it's like NFT mania but for real world stuff

I believe BTC is gaining ground every day. How I wish more country will adopt BTC. That shows that BTC has a future.

You don’t have to wait for your country you can buy it and move to another country, now is the time to look after yourself

Whatever way, this will help common people understand and adopt Bitcoin. Politician will always want to gain from their each move, maybe this time BTC will also gain.

they don't care about common people, they care about keeping power and maintaining wealth anything else is just a co0ncidence

Whether their intentions are pure or not, it's a good thing that they're publicizing Bitcoin and cryptocurrency in general. These moves could help in increasing the adoption of cryptocurrency.

I don't see it that way I actually see it as the opposite, their pushes are only good for institutional adoption, I think that the longer its rejected the more retail can get in and custody it, which is what I think is a better option

I guess there are different ways to look at the subject matter.

Very interesting. Biden mentions BTC negatively and now we have states that are set to make big moves with it. Interesting times ahead.

Well, this is an incredible decision, if the state of texas also takes this decision then bitcoin would go far, and crypto would also have a good boost.

Nothing written in stone yet, we'll have to wait, these things take time, if these 2 fall in the states and tonga deal goes through and El salvador continue to grow, it's only going to encourage more to switch over

Well, let's hope it all comes to pass 🤔.

Just Bitcoin? Should at least be the Top Ten. I hope she can pull this off.

I think it will be a common thing for politicians to make their political stands on their support of Bitcoin.