Currencies Getting Creamed By The Dollar

In today's edition of YIYL, (You Invest, You Lose) we take a step back and look at the world's most powerful shitcoin, the US dollar, the deepest most liquid market, and the currency that underpins everything right now.

As the world finds itself short of energy due to supply chain bottlenecks, we need the coupon in which energy is traded and that is the US dollar. You can't say for certain swap lines purchase oil, gas, and other commodities without having the preferred coupon for trading.

As countries require these dollars to ensure they have a steady flow of energy into their countries dollar demand rises. As uncertainty in other markets continues to show, people want to get out of other local currency exposure and into dollars.

As Americans aren't spending as much as they used to, especially overseas due to higher interest rates forcing them to service debts, you're seeing dollar demand rise and in the process things that trade against the dollar gets crushed, primarily emerging market currencies. 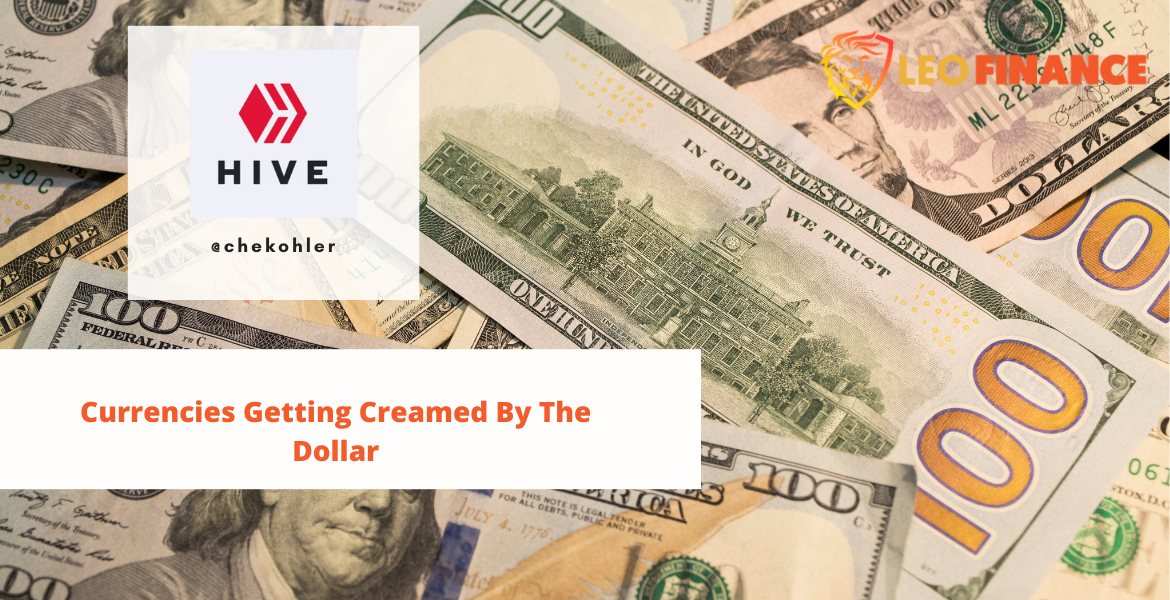 Who is getting the worst of it

If you are in any of these countries, you've probably noticed a material drop in living standards and a material increase in the cost of living as your central banks trip over themselves to acquire dollars to service imports while these countries are selling exports at cheaper prices.

It's a vicious cycle you face dealing with the dollar-wrecking ball, and it won't be going away. Inflation numbers are showing no sign of slowing down in the US after the latest print and another rate hike is on the cards, which means more pain is to come for emerging markets.

Of course not every emerging market will be affected in the same way, if you're one with commodities, you can offset the dollar dominance, with the premium you're getting for your commodities, and help steady the ship.

This might even be a call to get your shit together in some countries and improve your commodity markets but I wouldn't hold my breathe. I am no fan of the dollar myself, I don't own any I don't see the point if you can skip it and go to the asset that is demonetizing the dollar in my opinion. But for others, I understand the appeal the US dollar is the cleanest dirty shirt in the hamper so people are always going to opt for it instead if they had to choose.

Bitcoin's volatility isn't for everyone and when people are desperate to hold on to some semblance of stability, which isn't real but more psychological, the dollar is their safe haven.

If you are in an emerging market right now, has your dollar balance increased? HOw are things working in your neck of the woods

Despite the strength in the dollar, it's not all rosy for the currency, as it's still suffering from record-high inflation and falls against commodities, energy and consumer goods. So sure there is greater demand for dollars both locally and internationally, but it's all relative and stability is really just in the eye of the beholder and your appetite for losses.

More than 99 % depreciation is crazy. I know dollar market is so hot at the time and it’s a real deal for goods and service export countries.

Dollar going to keep slapping around every other currency, there is no hiding from it now

What are your favorite investments vehicles in the current global crisis?

I don't invest, in this market it's nearly impossible to find real yields, you're just chasing your tail, so I am just waiting and stacking sats, since its the only thing outpacing the growth in money supply

I believe is a good option. Do you invest in the stock market for dividend?

Nope don't see the point do you know any stocks paying a dividend that is higher than inflation?

LOL! You take that bet and let me know how it goes

It isn't all bad news for those countries though, it's true that their cost of living is increasing overall but any dollar you obtain in crypto, for example, having some funds allocated in HBD benefits you more than two years ago.

Of course this isn't an option for many people but the colony of Venezuelans and Colombians at Hive is quite big.

Lol most people don't even know what HDB is nor a stablecoin, its a small minority, most people also can't earn dollars while in their local currency, you're trying to apply an edge usecase to the majority of people

Lol the Canadians get a bit of a free pass because they live rent free next to the US, but its coming, probably much later than the rest of us, but we'll be here waiting for you