@chekohler 76
about 2 months ago
LeoFinance

As is always the case, we find out that soycoins are not decentralised and have more points of failure than swiss cheese has holes in it. In the latest hole in their system, Circle’s USDC has “blacklisted” all Ethereum addresses owned by Tornado Cash listed as part of the compliance with the US Treasury Department’s sanction against the protocol.

The news broke when Twitter bot named USDC Blacklist, which scrapes the blockchain for USDC blocklists, highlighted the issue as it tweeted multiple times through Monday after the sanction was issued.

The USDC “Blacklist Policy” states that when an address is “blacklisted,” it can

“no longer receive USDC, and all of the USDC controlled by that address is blocked and cannot be transferred on-chain.”

Tornado Cash currently holds around $81,000 USDC, which is now potentially frozen. Now since ETH is a Turing complete system that dox's its users with massive amounts of metadata you can always follow the tokens and addresses so even if people were swapping in and out of other tokens, you could either freeze the USDC or swapped token.

Blacklisting has been going on for some time

I don't know why this is such a surprise when USDC and USDT have been blacklisting addresses on ETH, TRON, SOL and the rest of the shitcoin chains for years, it was simply on the issuer level at the time. Governments would go to Circle or Tether with the addresses they wanted to flag and these stablecoins could then not be redeemed for dollars or if these blacklisted addresses moved it to an exchange the funds would be seized.

These blacklists set a precedent and there was always going to be a creep once you gave away a little power to government institutions. Since shitcoiners need to simp for the government to remain alive, because they are centralised they have to play by the rules. 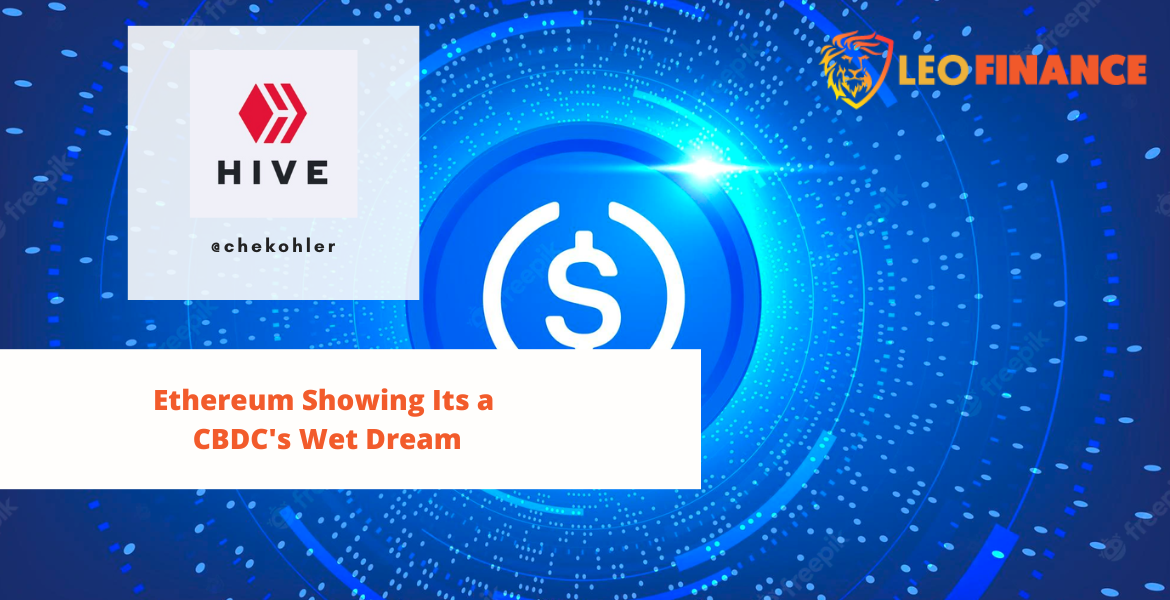 Nodes are in on the action

So how can I make a claim that other tokens not tethered to an issuer like Circle or Tether can be blocked? Well your precious nodes are conforming to big daddy government too

According to reports popular Eth nodes infura and Alchemy are blocking RPC calls to tornado cash. Now you can say you could use another node, but what node cannot be co-opted if the biggest ones can, now you can try running your own ETH node but good luck with that shit show.

You can say you can move to another chain, but they are even more centralised than ETH so really any argument at this point is a waste of breathe.

It's a wonderful thing seeing people realise that if you don't run your own node to broadcast to the blockchain, you are larping that isn't decentralisation. You don't achieve deentralisation with a chrome extension or an android app, it's time for soycoiners to grow up and realise they're just playing pretend.

Soycoiners remind me of kids who took their parent's money put it in a pile added some sticks and stones around it and said some random incantations and then dared other neighborhood kids who don't give a fuck about their magic to take the money and then they suppressed when the money gets taken.

People think bitcoin competes with shitcoins, when they didn't even show up to the fight in the first place. Some soycoins will simp to the government the ones that resist will get crushed because neither can enforce their decentralisation.

So enjoy playing around with your chuckie cheese tokens

This drives me more and more to start up my own node. Hopefully someone will create an easy to follow guide

Will you be running an ETH node? - https://ethereum.org/en/run-a-node/ You can find instructions here,but it won't be a full archival node, you'd need to run quite the operation for that

I was thinking a bitcoin node

Oh that's easy, you can just run bitcoin core on a laptop of your choice, if you do want a stand alone device, you can spin up one on a raspberry Pi that's what I am doing, and run something like Embassy, umbrel or citadel alternatively you can just buy a plug and play node

Do you have any instructions?

If you're doing a raspberry pi try - https://umbrel.com/
If you running core on a computer - https://bitcoin.org/en/bitcoin-core/

@pizzabot 56
about 2 months ago
PIZZA!

That’s a real stable coin to me.

Lol good luck with that

USDC is centralized therefore ETH is centralized.
What a ridiculous maximalist jump in logic.
I thought I was going to learn something on this one.
Nope.

Any centralized entity can blacklist anything that they want. Explain how Ethereum is supposed to control everything connected to Ethereum.

Nothing about this development points to the idea that Bitcoin is more decentralized than anything else. If the top mining nodes get together and start banning transactions/wallets, well guess what? That's exactly what will happen. Then this entire argument gets flushed down the shitter where it belongs.

Yo dumbass read the post, I clearly stated that the USDC was only one attack vector and I state the NODES are also an attack vector for one the black listing of tokens. If tokens are blacklisted by exchanges and nodes, then anything traded with it is also subject to that, so you simply drain the liquidity away from that token with a blacklisting and its DOA

So you can pretend that you can move tokens on chain if you can broadcast directly by running a node, but if no person/counterparty is willing to trade with you, that tokens value is worth sweet blue fuckall.

Just because you're a shitcoin apologist doesn't mean you shouldn't learn to read my arguments, do I need to hold your hand and teach you how to read too?

Casually dismissing my point even though I've been here 5 years studying this stuff.
This exact scenario can and will happen to Bitcoin.
To an extent it already has happened, just on a smaller scale.
But by all means keep up this pathetic delusional hypocrisy angle that only surfaced during the bear market.
It's pure entertainment.

Look at where we are having this conversation.

Your brand has become synonymous with the clown meme at this point.
Seriously what are you gonna talk about when alt-season starts?
Back to sports shitposting? Kek.
How about you stop letting your toxic emotions dictate all your actions, eh?
Too much to ask?
Yes, it was a rhetorical question.
I know what you are going to do.
You're predictable as shit and bring nothing to the table.
Carry on.