I've noticed a lot of ass-kissing around politicians getting into bitcoin and sure it was to happen eventually. Politicians only work to enrich themselves by maintaining a job in government and if they can keep their support base happy, they get to take a portion of the taxes stolen from citizens and put it into their pocket.

As Bitcoin becomes a more popular medium to store wealth and people increase their stake in the new system, it would naturally become a voter issue. Some politicians want to be seen as pro-bitcoin. They think it would make them seem more progressive and forward-thinking even if they have not learned a single thing about bitcoin, the fact that they say it should be enough.

Personally, I believe bitcoin works best when it's under attack so when I see new laws and regulations I don't get too excited. I think it makes bitcoiners complacent and they forget the mission, which is to make these lawmakers irrelevant and limit their power. 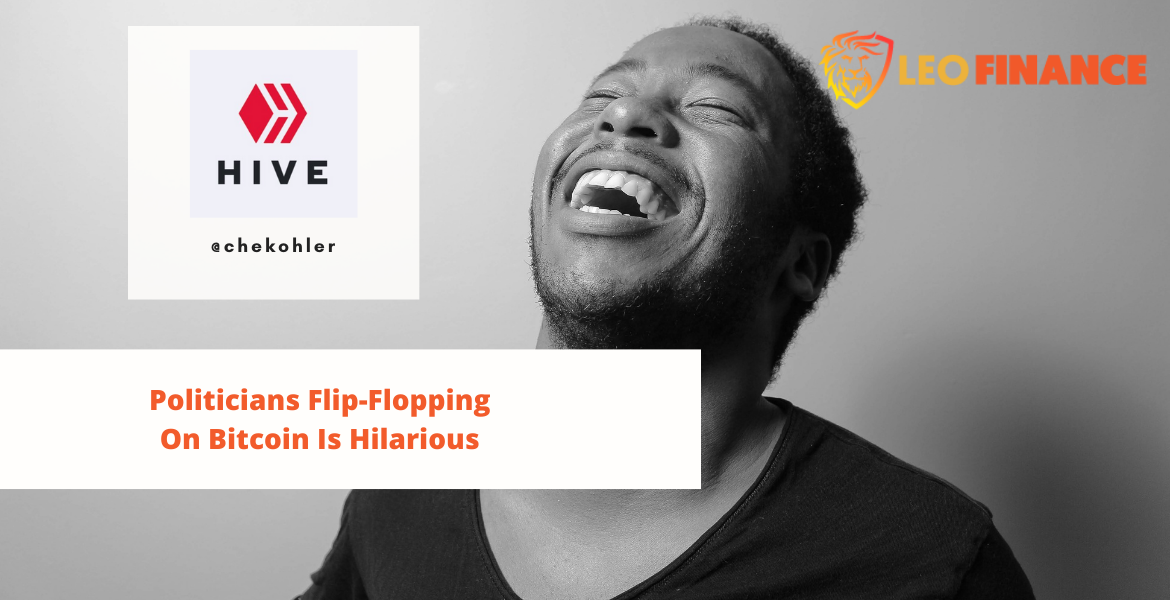 Eric Adams, mayor of New York recently came out with his big swing and pledged to accept his next three paycheques in bitcoin and Ethereum. Some people cheered, I wasn't impressed, why should I applaud someone who benefits from the theft of others through tax and inflation and doing work that's pretty meaningless and over rewarded.

Even if he's putting his returns into bitcoin, what does that matter?

Trying to keep as many voters on your side

Anyway I left the issue and I knew these paper-handed fiat maxis would flip flop eventually and it didn't take long. Now Adams has come out against bitcoin mining. I guess when you have to choose between getting climate crazies on your side or bitcoiners, at the moment you would choose the ESG'ers because they're getting a pretty sizable chunk of funding from the money printers these days.

Again, it's all about short-term thinking and it's going to burn him but hey, it sure is fun to watch. Fiat maxi's may have short memories, but bitcoiners don't and they calling him out on his bullshit and it's great to see people getting exposed.

How can you be against mining but be pro-bitcoin? It's like saying I support food but I don't support farming, this is a typical response from someone who doesn't have a cooking clue about money or bitcoin and probably has an ear with shitcoiners trying to push proof of stake on him.

I won't be surprised if his the first of many politicians to see their arse trying to get in on the bitcoin ticket and getting their hands burned.

The political game is to attack an industry until the political class gets a cut of the action.

Unless it's an industry they are heavily invested in like the military, then they all for it

They're never going to resign because they cannot survive in a free market the rest of us have to compete in their only value is to suck money from the state, that sucks money from individuals who actually work for a living

Personally, I believe bitcoin works best when it's under attack so when I see new laws and regulations I don't get too excited. I think it makes bitcoiners complacent and they forget the mission, which is to make these lawmakers irrelevant and limit their power.

This is something I have thought a lot of lately and I agree with you. I'm just not sure what's going to happen as crypto becomes more mainstream and also gets more regulated. And also, far from everyone will want to store their own keys and so on.

I had missed this story about Eric Adams, as you write, it makes no sense at all.

I'm glad to hear I am not the only one holding on to skepticism, I know I am biased because I own Bitcoin, but I hope that it doesn't cloud my judgment and I don't want to cheerlead anything mindlessly.

I don't know where all this is going or who will be on bitcoins side and who won't but I don't think people are taking bitcoin seriously, it seems most just see it as a trade to make more fiat.

I think that very few people will store their own keys and they'll have to pay for that, either through taxes, a freeze on funds or 6102 style seizure. Governments aren't exactly making their citizens richer but still want to extract more and more resources. All this war talk seems like just another excuse to print more money, I see many European nations have joined the US in increasing war budgets and that means currency debasement because war is not a productive action.

So that encourages more people to move into bitcoin to protect their purchasing power but if you don't hold your keys it's pointless.

Every day I think maybe we've reached peak clown world and we now getting back to reality, i see another crazy headline that makes me feel like im the one taking the crazy pills.

I don't think people are taking bitcoin seriously, it seems most just see it as a trade to make more fiat.

Yes that is how most people think about bitcoin and crypto, for sure.

Personally I think you need to spend quite a lot of time on research in order to actually understand what bitcoin is and is trying to achieve, then you start to change your perspective. And it's not easy to understand. Most people don't have a basic understanding of how the current financial system works and to then try and understand something that can replace it, that's just quite a leap.

You also need to be motivated and actually interested. Why is this something I should spend so much time trying to understand? I don't think most people have that interest.

For me, crypto has been something that really reignited my interest in economics, so I was at least fairly knowledgeable about the financial system. But even so, I easily feel rather overwhelmed in the crypto space.

I feel you totally took me a good few years before it started to click for me and I am still learning and I have to be committed to learning now since I have a stake in the network. I totally agree with you, its about learning what the current system is like to see why its broken and then unlearning or rather learning why they are fundamentally flawed

Then you only see the value of bitcoin, I do think this is a journey for the early adopters and like you say very few are interested in making that journey, you either need a tech, economic or finance background to start with and then need to learn all three, its such a mission, but the proof of work for me has been so worth it

I think you are on the right track and your framing of it, I just think the tech jargon and kabuki theatre is another trapping that many are falling for and takes time to realise the limitations of a blockchain and why it doesn't revolutionise much apart from money

you either need a tech, economic or finance background to start with and then need to learn all three, its such a mission

This is so true. But it is also stimulating, I think otherwise I wouldn't be motivated to keep learning 🙂

Indeed lol I am always mystified about how I keep coming back for me, I\ve never been one to focus on one thing for very long, but bitcoin has me. What's the most fascinating thing you've learned in the last year or sp?

Well, last year... I have learned quite a lot so hard to say. But I'm actually not so focused on bitcoin. For the last 6 months or so my main focus has been on the Cosmos ecosystem.

When crypto was still new to me I used centralized exchanges but now I'm doing my best not to use them at all. I really like the Keplr wallet.

I've not really dived deep into Cosmos, what has attracted you to cosmos?

for me its been the importance of running your own node, if you cant verify the data you're seeing, you're trusting another third party and it's sort of self defeating. Since I started running a node it's really changed my bitcoin experience and helped me improve my online privacy, I am looking into getting an embassy set up too, so I have my own private cloud server

I've not really dived deep into Cosmos, what has attracted you to cosmos?

IBC.
Also, I really like Osmosis, it's so user-friendly.

It makes sense with the nodes, for sure. For me, it's just too much responsibility I feel. I wouldn't be able to relax.

Politicians will always be politicians. They have no choice but to weight the options available. I am pretty sure most of us knows how the mainstream media and corporate powers are pushing towards green energy. They obviously do not like BTC or crypto so I am not surprised to see them flip flop.