Poolin Mining Pool Seems To Be Running On Empty

In today's edition of YIYL, we head over to no-ones favourite way to make money in bitcoin and shitcoins and that's mining. Now mining is a complex business, you need to spend a lot of capital getting the mining rig, setting it up, burning the energy to keep it running and then either point your hash rate at the network directly or use a mining pool.

A mining pool is optional but it improves your odds of getting regular payments, you see as a group you commit hashes to the pool and when the pool wins a block, that capital is spread between the participants, so you increase the odds of constantly making a return on your expenditure.

Poolin is the 6th biggest mining pool in bitcoin, but it also mines other shitcoins. It offers users a custodial wallet, and encourages those miners to leave their coins with poolin, unlike other pools that encourage you to take self custody.

Remember kids, not your keys not your coins.

Anyway Poolin encourages miners to leave their non-KYC fresh bitcoin and shitcoins with them, and they offer a yield for leaving it with Poolin. Where did the yield come from?

Well it sounds a lot like from Terra, 3AC and Yolo'ing into DEFI and sure enough poolin got pee'd in or poop'd in, I don't know, either way some bodies are now floating to the surface, and these floaters are stinky. 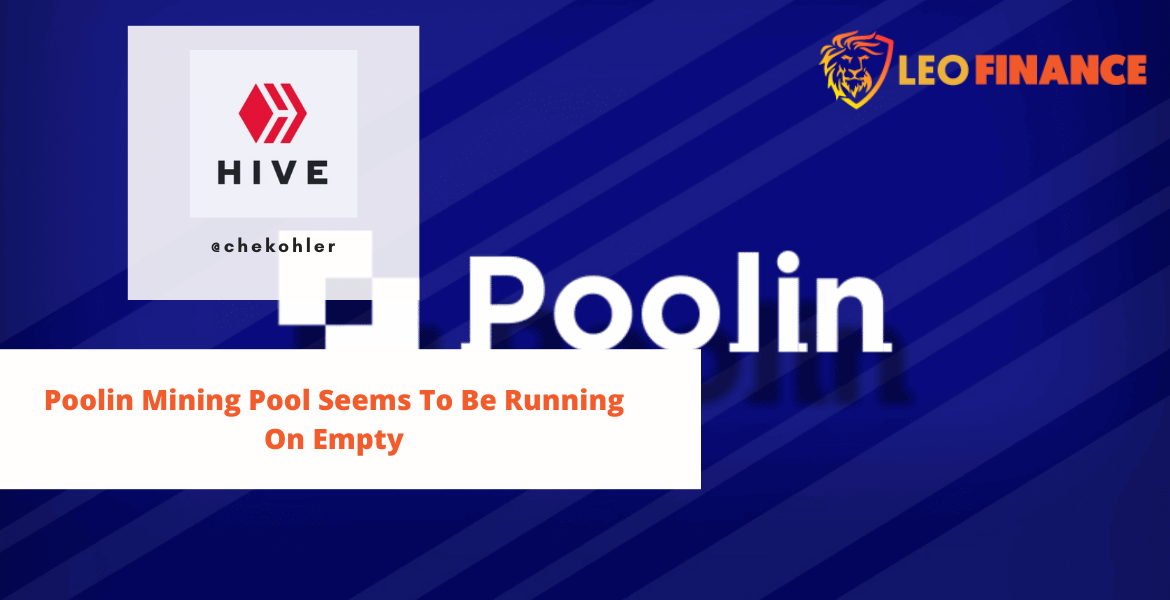 As is pretty common when you try to be too clever and leverage up your treasury you end up short redemptions and you get bank run hard. This is what happened to these CEFI lenders and most likley what happend to this mining pool.

In an announcement, the Poolin team said the withdrawals would be paused and you're now in forced hodl mode for your safety.

“We will make a snapshot of the remaining BTC and ETH balances on pool on September 6th to work out the balances.”

“Withdrawals from Pool Account will be paused. Time and plans of resume will be released within 2 weeks. Regular mining and direct payout from mining pool are not affected.”

I don't want to speculate but it sure sounds like your short bitcoin and you're looking to cover ass with liquidating positions and incoming bitcoin, but that's just me speculating.

If you start shitcoining, you will get rekt

Mining and mining pools can be a profitbale business, but greed is a hell of a drug and instead of just focusing on mining operations, using that capital to fund DEFI and trading ponzis came back to haunt Poolin.

It's just another example in the long list of examples on why shitcoining will get you rekt.

Step right up and collect your shitcoin IOU

Since Poolin was managing like a multi-currency balances it all becomes a merky mess when you are going to try and audit and see who is short funds and who is owed what, so as that process goes on, they want to set up a option to claim.

Poolin plan to issue IOU's in the form of a token, because they didn't get enough of fucking around with toknes.

The tokens will reflect a 1:1 ratio of user balances across bitcoin (BTC), ether (ETH), tether (USDT), litecoin (LTC), Zcash (ZEC) and Dogecoin (DOGE). Poolin IOUs can be traded for the corresponding cryptocurrency, used to buy new mining machines or shares of the company.

Good luck with that one.

In a response to the fail

The mining pool lost almost half of its computing power from August 31 to Sept. 11, according to BlocksBridge Consulting, and with that means a loss in revenue, this makes it even harder to try and use future revenue to pay back the losses and this could be a real sucker punch for those who keep faith in Poolin's ability to honour redemptions.

That's the thing with a free market like bitcoin, if you fuck up, its tickets for you, that's the ruthless nature of the business.

Then if we add to the fact that there won't be any ETH mining should the merge go ahead and I wonder how poolin are going to financially recover from this, better call up FTX for a fail-out, I mean bailout.

First rule of crypt - own your keys and not your keys not your coins.
It’s been iterated so many times and people are still making these mistakes.

It might be the first rule, but if people don't understand the value of that rule by losing money they won't be keen to practice it

It’s funny one of the dudes that I talk to thinks that it’s fine to leave all your stuff on Coinbase or even thinks Coinbase wallet as secure. I’ve argued with him numerous times that it’s so foolish to take that gamble when you can spend 100$ and secure the stuff yourself with a guarantee as long as you don’t fuck it up by losing or compromising your seed phrase you will never lose the crypt in the wallet.

I did get burned with Celsius and I’ll admit that, I got greedy enjoying the interest for holding it on there but I did pull the bulk of my stuff out well before things went sideways.

Lol I feel you, I also got rekt by an exchange back in 2017 and I learned my lesson the hard way thats why I keep pushing the self custody because I care lol but it often falls on deaf ears and people want to learn first hand and who am I to rob them of that experience

Hahah ya how noble of you to preserve that wonderful experience for them :D

Oooh that's not looking good for Poolin, especially since the ETH merge has left their miners in the dust of history.

And now ETH is even more centralized apparently. Now I understand why bitcoin maxis like to keep it real. The alts, including ETH won't all be as resilient as BTC in the end.