Well well well, I am no geopolitical analyst but the man did I call this one spot on, about 2 months ago I looked at the way Russia was setting up their reserves as a hedge against sanctions and boy was I correct. Not that I knew the extent of these sanctions or why it would happen, but as they say follow the money and you'll find the truth.

Reports state that Western countries have seized between 350 - 500 billion of Russia's foreign reserves and they only have access to 13% of it held in Chinese yuan.

That's no small dent in anyone's balance sheet and to recover from a hit like that with an attack on your currency is not going to be easy either, but the Ruble has held up pretty well all things considered. 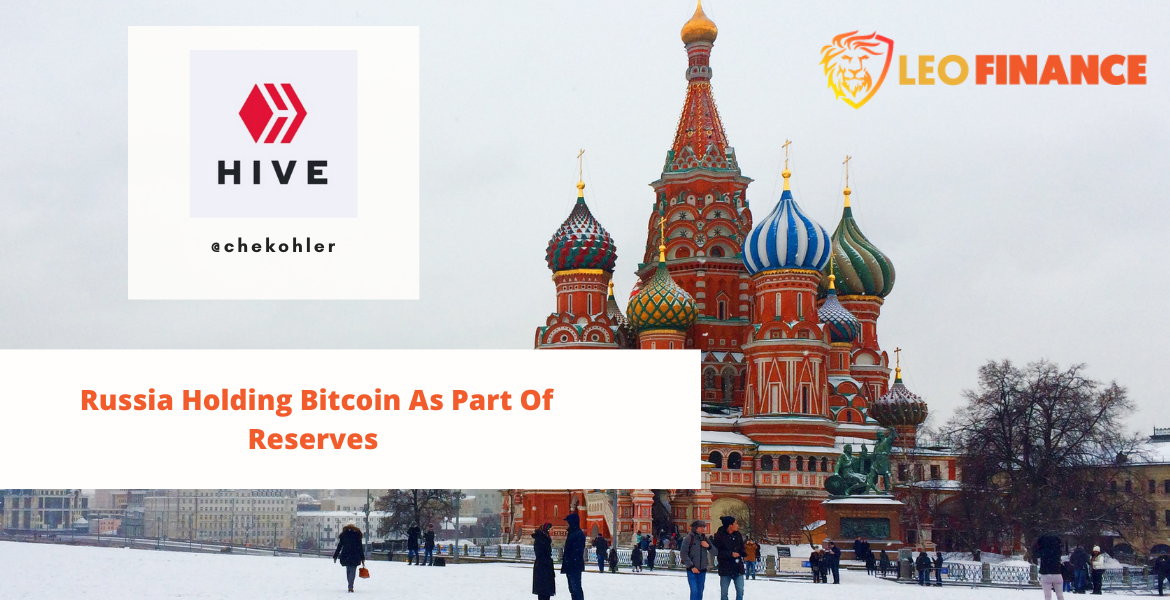 Now that Russia has no need for Euros, Pounds or Dollars, they'll need to put their income into something else. Yuan and Indian Rupees will be an obvious choice as these two countries will be massive trading partners going forward.

While Russia holds around $106 billion in gold reserves, they've also come out with a statement that they now own $130 billion in bitcoin and cryptocurrency [3].

I would not be surprised if the uptake in bitcoin use on the retail level has also spiked as individuals are looking to get money in and out of the country with banking limitations they suffer from today.

So it makes sense that this could provide a breeding ground for more bitcoin use on the individual, corporate, and state levels.

An excuse to own bitcoin on a sovereign level

These sanctions have given all countries an excuse to move to a bitcoin standard, especially ones who don't have the best relationships with the West. If we only look at countries with the heaviest Western sanctions like

Could all look to follow Russia into having bitcoin reserves. I think that there could be more countries added to the list with talk of sanctions coming for Hungary, Pakistan, and India due to their stances on the Russia issue.

If we consider the size of Pakistan, Russia and India alone that's 1.5 billion people and if we consider resources Russia and Venezuela are the most oil-rich countries in the world.

This is not some tiny section of the world, with no disrespect to what El Salvador has done for bitcoin growth. This is a section of the planet with a higher population than the West, and if their shunning on the global stage pushes their countries and by proxy citizens to bitcoin exposure, this could really foster the next step in hyperbitcoinisation.

Bitcoin is still a baby

This move has not come without serious consideration if we consider
the response from Deputy Governor Ksenia Yudaeva who rightly states that bitcoin doesn't have enough liquidity to clear transactions on a central bank level while a bank of Russia Governor Elvira Nabiullina didn't feel comfortable adding it to the country's balance sheet.

Of course, trusting bitcoin can be seen as a massive risk, but I think with the lack of choices they've been forced into it. I do think they could have had a smaller allocation, but I suppose it was a race against time to secure some of those foreign reserves into something else, so as not to leave completely empty-handed.

A silent move with a bigger impact

I don't think this news has really sunk in due to attention firmly focused on Ukraine, which is understandable. But, I am sure if I told you 1,2 or 5 years ago that a massive country like Russia would have bitcoin on their balance sheet to the tune of billions, you would have laughed me out of the room.

You say that Bitcoin is still a child ... I believe so too. In Italy everyone knows it by now, but few own them, moreover many only know Bitcoin, they don't know that there are other cryptocurrencies. We can say that HIVE in Italy is almost a stranger.

LOL I love the way you phrased it, I am surprised there isn;t more adoption in Italy, what do you think the reason is for it?

If I have to look at South Africa we have 12 exchanges you can sign up for to swap your local currency more than any other country in Africa and even countries in Europe and Asia, there is a strong group of people pushing for bitcoin here but its not very big compared to the 60 million population but i'd say South Africa has a much better bitcoin penatration than most countries

Italy is a country where the mass always moves very late, many are traditionalists.

Great post. Didn't knew Russia holds $130 billion in crypto. You're right, it will spark interest to other countries as well.

I think its a massive advert for bitcoin, other countries, businesses and individuals are seeing the need for money that cannot be censored or confiscated without real force. $40k is cheap for that kind of safety

The only question is how without SWIFT they will use bitcoins, which, in the end, need to be exchanged for the ruble? Yes, someone will bypass the sanctions, but most of the bitcoins, for many residents of the country of bears, will become a pear that cannot be eaten.

SWIFT is not a monetary system it's just a method of interbank transfer system, they can and have set up credit lines with ruble/yuan, ruble/Indian rupee which is the currency of 2.4 billion people, more than Euro and USD so I think they'll be fine.

They can then hold their excess reserves in cash/Chinese or Indian bonds, bitcoin, or precious metals, while other countries have also started to set up ruble reserves and purchase Russian bonds to prepare for the trade they'll need. We can already see that with the likes of Iran

The 600 billion may have been a hit but they still have one of the better balance sheets of any government, apart from the likes of Norway. Being so commodity-rich like Russia means you have future revenues you can count on, there's always a buyer for commodities. Regardless of what the west says they'll have to capitulate eventually which they'll probably do by purchasing through 3rd party resellers

The way I see it, the Russian economy has all the cards, what is it honestly importing from the West that it required credit lines with USD and Euros anyway? A marginal percentage that is clearly not impactful as we can judge from the marginal effects sanctions have had on their economy

As inflation and supply chain disruption continue, they are also bagging a premium for their resources, in this commodity bull market we're in right now.

Yes, sometimes you think about one thing and talk about another, I wanted to say .. without MasterCard and Visa

Yes you are correct, but they've already moved to join up with Chinas UnionPay according to Bloomberg which has a massive profile in 180 countries and is interoperable with a lot of networks already. I think that's more of a hit on MasterCard and Visa, since they are competing with UnionPay so you've effecetively handed over a massive market to your competitor

I don't think China is stupid enough to get between sanctions. Yes, for now, they threw a bone at the bear, but only so that they could soon grab him by the balls.

Russia and china have a good relationship, China doesn't have access to the commodities Russia has like rare metals and due to their energy needs they are becoming more reliant on Russia.

In addition, they run joint military operations on their Eastern side, which very few countries do themselves, because you need to have real trust in one another

Now that Russia has proven the west sanctions are a bee sting, China has no fear of the west

You know, I don’t know what your belief is based on that China is ready to cooperate with the country of connecting rod bears, but I rely on some unshakable things in the policy of communist China, namely, on the works of Mao Zedong, on which. the entire vertical of power and external political and external economic relations are built on the foundation.
In fact, for China, today's Russia is a traitor to the communist ideology, and no one is on ceremony with traitors. Yes, the Chinese will smile sweetly, nod their heads that everything is fine, but their main goal is to take everything and not give anything away to those whom, according to these works of the ideological inspirer of China, they consider their enemies. This, if in a nutshell). And one more thing, a bee sting leads to the fact that many Russians leave Russia and ask for asylum even in Kazakhstan, in a country that they, even in a nightmare, did not consider as a place where they will spend the rest of their lives. This is a small fraction of that. what's happening. China can also obtain rare earth metals in South America, Malaysia, or South Korea. at worst, without the risk of falling under the rink due to sanctions.

this is all narrative with zero backing I am only providing facts and following the money, you believe what you want, i'm not here to convince you. I am interpreting facts

Perhaps you have read the writings of the Great Mao, if not, read and you will understand that my beliefs are based on facts written on paper, which are passed down from generation to generation by the Chinese.

So, For an East Asian person like me, your arguments and ideas are difficult to understand.
Above all, to the East Asian governments and ruling classes, your thoughts and claims will be accepted as dangerous actions that undermine the authority of the state and the value of fiat currency. They are intensifying the censorship and retrieval of information in order to monopolize and inherit their wealth and power.
They will put anyone like you in jail who denies the absolute authority and value of fiat money.
They believe that only through fiat money can they retain their wealth and power forever.

Russia did it because they had very little choice, El Salvador the same, governments won't move to bitcoin if they have a choice, which is great. You should not rely on your government moving to it, its a grass roots movement.

I think banning bitcoin is a great idea, I think it keeps it out of the hands of people that think they have power now, and should be in the hands of as many people as possible, which is what is happening in many parts of the world

Governments being hostile to bitcoin is good for bitcoin, it only sees them fall behind other countries,c companies and people and as the economic reality catches up due to the competition beating them they are forced to change or be made obsolete

Dear @chekohler , Your arguement is interesting! I hope that a more egalitarian and open world will be created through Bitcoin!