Why I Welcome The Possible Tether Implode

Who would have thought after Tether paid its fines that the USDT FUD would be back? Well, me, of course, you can only pay off, so man, people on your way to a 65 billion dollar market cap before people come knocking for their next payday so you can keep your Ponzi going.

I've spoken about the FUD around Tether before. For the record, I don't hold USDT or any stable coins for that matter; I personally think all they are is a painful taxable event which I would like to avoid.

The whole point of Bitcoin was to set up a new store value and unit of account, which is WHAT money does. Bitcoin was another trading pair to other currencies and allowed you to get out of one monetary policy and into another and has done well in honouring that promise.

As more people wanted Bitcoin and later shitcoins, they needed more fiat on-ramps. So Tether was born, it allowed people to swap in and out of a fiat representation faster and brought a lot of efficiency to the market, so at that point, it has done well.

My personal feelings on stable coins

Personally, I think stable coins are the first NFT, getting you to believe you can take something and "back" it with something from outside the digital realm. It doesn't make a whole lot of sense to me to say, oh, look at these decentralised dollars backed by centralised dollars lol wtf?

Anyway, people need this for their transition into Bitcoin, so I get it. The USDT unit of account gets dicks wet and pussies hard; people love measuring their personal wealth and, to an extent, their self worth in doll hairs.

If I wanted fiat, I could earn it, so I see no reason to hold USDT; I don't trade, I don't need to take profits from gambling on shit coins, so USDT has no value to me.

Satoshis are all I need, and as it moves towards parity with every other fiat currency, I don't see the need to hold a depreciating blockchain asset. So to me, USDT's possible demise wouldn't affect me too much. Now those in the crypto space have been fudding Tether for some time, and there has been plenty of PR to try and drown it out. But what concerns me is when people who are outside the crypto space traditionally are now looking into it and giving their take on it.

That, to me, is a signal of a far bigger story in the making once it starts to reach the normies and precoiners. I honestly don't blame people for hating crypto. It's a complete shit show of tribalism and scams, but because there's money involved, people are willing to throw all morals aside and whore themselves out for a few extra tokens.

If you want to get some great takes on the USDT fud, I suggest checking out these two videos, really well done and breaking down the issues and providing you with the history of Tether.

Why Tether doesn't matter to me

Tether is the crypto spaces liquidity provider, 60+ billion to be exact, and growing. There are other stable coins like USDC at 23 billion and BUSD at 10 million, but you can see they're not even close to the systemic size of USDT.

USDT is also minted on multiple chains like BTC liquid chain, OMNI, Ethereum, Binance Smart Chain, TRON and EOS, I think, can't really keep up. Anyway, if the thing backing many crypto trading pairs goes up in smoke, what happens to all those orders?

People would be selling like crazy if USDT were to implode. Shitcoins would be obliterated in the thousands, and no cryptocurrency would be safe.

I could easily see BTC dip down well below the 20k if USDT were to shit the bed.

To me, that would be one hell of a buying opportunity, so I am getting dry powder ready in case we do see this end badly, despite the amount of paper wealth that would be obliterated in a matter of weeks.

In the end, one Bitcoin remains 1 Bitcoin, no matter what the market values it at today.

I say bring it on, open up the books and lets rip off the bandaid.

If you liked this post, sprinkle it with an upvote or esteem,, and if you don't already, consider following me @chekohler and subscribe to my fanbase

"I am a Jessie." this morning. Just had my first ever ocular headache (self diagnosed via Google). Very weird! 😁 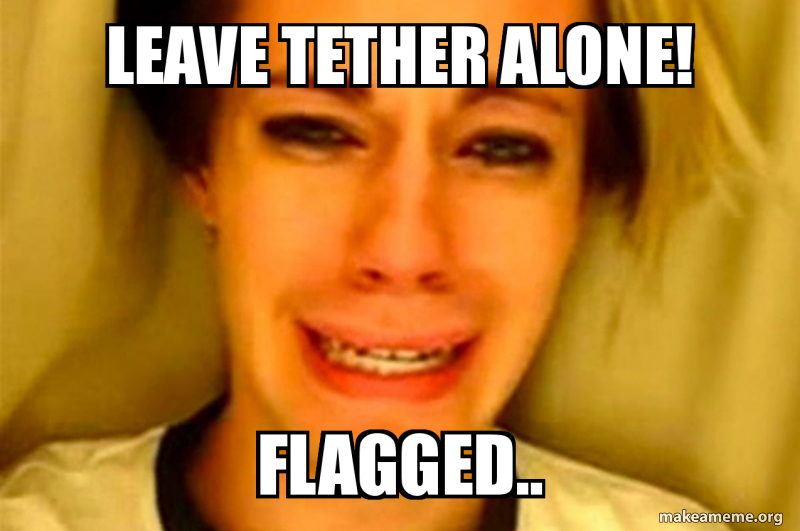 Lol why can't I talk about USDT?

You can talk about whatever you like, take it as a compliment you are such a good writer that your hradline threw me into a tizzy, and i pressed the wrong button. I had to do the flag to compliment the drama factor, i'm trying to sell mugs here. It does not censor the post, of course you can write about whatever you want, I think it adds my true gut reaction. I don't wanna see my tether imploded. That would be chaos for btc and all crypto, that is the last thing we need right now. what we need is the status QUO! No worries, it is a good post! It was just a joke! Just warming up for after the hardfork, things are gonna change around here for the better!!

I don't mind the flags, I just thought you had like a counter-argument, sure you hold tether that's fine but you have to admit these allegations are concerning like you said not just for you as a tether holder but every business using USDT to settle transactions and all crypto

If it comes out its unbacked, how much of its reserves can be liquidated to back up its claims, 60 billion USD is a lot of money.

I am prepared for it, so if it does happen I won't be too hurt by it

No they are not concerning to me at all. Also the allegations are fud, that's why I flagged, I don't agree at all. I been hearing tether FUB for ages, and I don't like it at all. I recall flagging one of your tether fud posts long long ago. Tether up nicely today, and btc down. Tether is the bomb! haha pun

Well that is the issue with most stable coins and I know Tether itself has a lot of issues. I do think there may be a few other stable coins that may be fine but I don't see them doing well when people take money out.

Excuse me, I think I will be swapping out my Tether, ttyl!

Well don’t take my word for it, plenty of info online! All investments have risk even “stable coins” lol the irony

I'm curious why the govt hasn't buried Tether into a grave and send the entire Crypto market back into the Dark Ages. Or are they waiting for a moment of MCD, Maximum Collateral Damage before they kick out a leg in the 3 legged stool called Tether.

That’s an interesting question well I know the NYAG has been on their ass but they paid the fine but I’m sure as this rages on it could make for a quick death punch! I just think markets are so fragile they don’t want to rock the boat just yet

But who knows? Perhaps like you say they just waiting to rug pull when it’s big enough

Sounds exactly like being put over a barrel. Must grease a few palms of the NYAG every now and then if USDT wants to stay in business. Even JP Morgan gets their hands slapped as a fine becomes a cost of doing business. The NYAG must be seeing this as a cash cow for now until thier Handlers decide to pull the plug.

I don't hold any USDT at the moment but it's usually my transition coin from fiat to crypto so I guess it's always pretty useful to me at every point in time. What's an alternative to it? Just in case. I don't like moving money directly from fiat to Bitcoin, I'd lose track of my investment.

There are plenty of alternatives like USDC, DAI, BUSD, TUSD, and a bunch of others! I just don’t see the point Satoshis are my stable coin

Lol getting a flag on this one, nice!

The stable coins are such a load of shit. If I wanted a digital dollar I could look at my bank account, not some joke of a coin! I didn’t know they were split across so many chains, that’s insane. It’s definitely really sketchy but perhaps it’s going to be used as a false flag to regulate the fuck out of the crypto market? I wouldn’t put it past them! It might need some guidelines but regulations are a pain and end up causing more annoyance in my opinion. There are lots of things going on in the world that are really sketchy, this one here seems to be another one.

I don’t buy the narrative oh citizens in other countries need dollars what a load of shit! If we wanted dollars we could get them at the bank or black markets in just about any country yeah it’s slimey sometimes but I can get dollars in PayPal too

They say it’s better for remittance why? Bitcoin is instant and improves in purchasing power how is that not superior?

But I’m just a close minded maxi what do I know?

Yeah I think it’s people who are just trying to adapt the mainstream mindset to the future of decentralized money. They will be able to do that for a bit but decentralization will improve and they won’t have any additional need for shit coins like USDT, I think. They will stick around though as a way for people to get conned into the system which is annoying. Whoever down voted you looks like they are part of that con lol

Lol we all have our own path to walk I came into Bitcoin and then went down my shitcoin path now I’m back at Bitcoin! We will all buy Bitcoin at the price we deserve the thing is shitcoiners will be the last to get in because they believe so hard their centrally controlled coin is better it’s jusy fiat with a Blockchain you not fooling me

Yeah that’s true. I know everyone is looking for a diamond in the rough to moon with. It’s good but rare, I’ll throw a few dollars at some but I’ll keep getting bitcoin. Especially if the update comes in November to the network that reduces fees.

I used to do that too, I still have a few positions I need to unwind into BTC soon waiting for some greater fool to take it off my hands! I’ve just become so delusions With Alts as I learn more about them

Why are you still using the mainnet yes taproot will reduce fees but you don’t need to use it!