There have been several applications in the past to have a bitcoin EFT approved in the US. There are already futures ETFs in the US while spot ETFs exist in Canada and Brazil.

Fidelity, Gemini, and Valkyre have all applied for ETF approvals in the past for the US market, and since we're pretty much in FUD territory right now it's only fitting that the latest application would be rejected.

I sure do like that all these negative media has come out in such a short space of time and it's done well to put a damper on sentiment and pricing.

Kicked to the curb

The rejection follows the same reasoning for previous rejections by the SEC prefers to grant licenses to ETFs that track bitcoin futures. Since futures can either be cash-settled or physical settled it puts less demand on buying and custody bitcoin than a spot ETF would

Many anticipate that a spot ETF in the US would see massive amounts of capital flow into the asset and this may not be in the interest of the US dollar in its current phase. 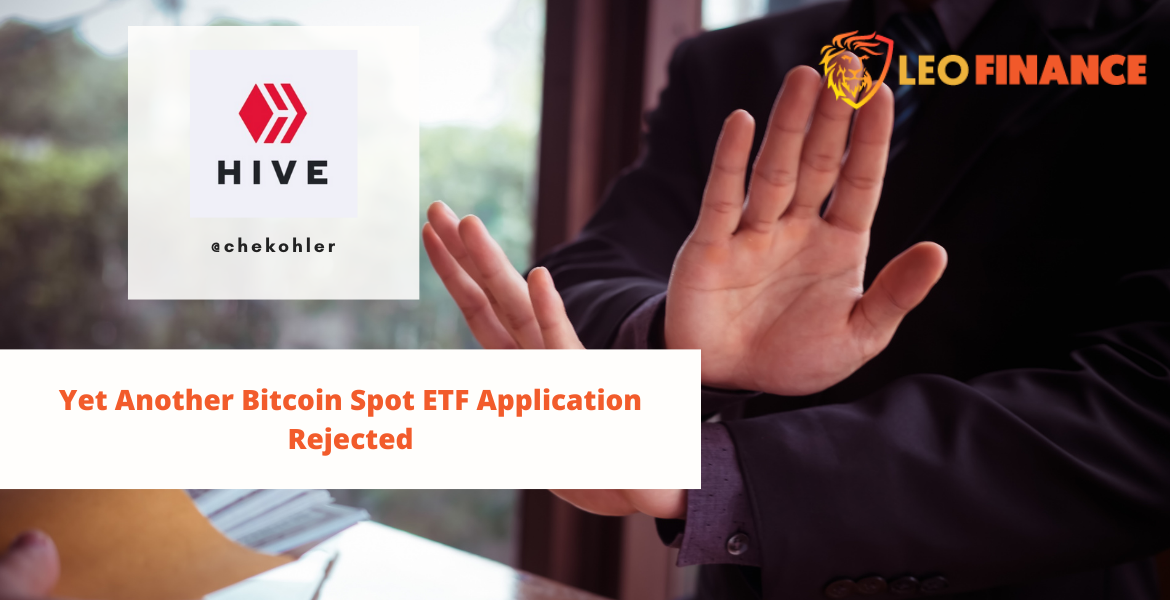 Why a spot ETF rejection isn't a bad thing

A large percentage of bitcoin already sits with exchanges and custody providers as it stands already. The threat of exchanges losing funds does push more people to take ownership of their coins with a self custody solution.

An ETF however, would make it very easy to own paper bitcoin as traditional brokerage accounts can offer access to the ETF. New investors may never bother to learn or dive down the rabbit hole and it could discourage many from taking ownership of their coins.

I think that the longer the ETF is delayed the better for bitcoin, I think more people need to learn how easy it is to hold their own coins and experience the power of self custody.

Leaving your coins with a 3rd party could lead to even larger honey pots that would be primed for attacks and the larger the honey pot the less likely investors would be to be made whole, since you can't print your way out.

This is sad to see and I don't like to use ETFs that track the futures as much. I never really liked the GLD (gold futures ETF) and if I had a choice, I would pick the gold mining stock ETF because they have shares in companies producing gold. So I guess the next best option for people is GrayScale or crypto mining stocks.

At least their are more options than there were before, I am not too concerned about a spot ETF in the US since all those funds will anyway just head off to coinbase and gemini, so whats the point? I think if you don't control your bitcoin you're missing the point of bitcoin

Well I think having options are always better. At least if things hit the fan, there will be at least some target for people to vent their frustrations on.

When 100% of your assets you can own already have third party risk and custodial holdings, whats the point of having bitcoin without keys? It's self defeating

I agree with you the less regulation and institutions that monopolize crypto the better. Our government will figure out a way to worm its corrupted hand into the crypto pot.