I started a small crypto altcoin portfolio with the intention to use some of my active and passive crypto earnings, reinvesting them in some 'crypto moonshots' (See Original Post). This is the update for July 2021.
It has been almost exactly 1 year since I started this portfolio and for now I'm still adding new coins and positions re-investing some of my online crypto earnings into these coins. It does feel like a big Altcoin Season has yet to come sooner than later.

The 2 coins I did add in August as usual were bought at the time when they were pumping with the hype and fomo getting to me which I something I never do with my main Crypto Portfolio positions.

The Fomo Buying backfired for FTX which wnt down by around -16%, Areweave however is trading +12% Higher.

The first one is Alchemist (MIST) which is one of the coins Chico Crypto has been covering for a while as one of the only youtubers. Alchemist solves the issue of Frontrunning on dexes like Uniswap for those that trade bigger amounts there. Since the swap requests are broadcast in the waiting transactions, bots pick the large ones up, setting higher gas costs which will push up the price for the original buyer they proft from. Alchemist solves this issue by directly going to the miners to pick up transactions and it's rumored to be an option as something to use directly on Uniswap. I bought it at around 100$ on September 10th aiming to add more in case it would drop back in price which happened seeing it fo to 75$ but I forgot to add. If did go up after to 160$ and now is trading back at 110$

Moonriver is a para chain on Kusama that has EVM compatibility which means it will be easy to move dapps that run on Ethereum over. There was some real hype around it at the time when I bought it and I actually was 'on time' getting in at 340$ seeing it shoot up to 480$ to now when the hype is over see it cool down again to below the price I got it at (292$). 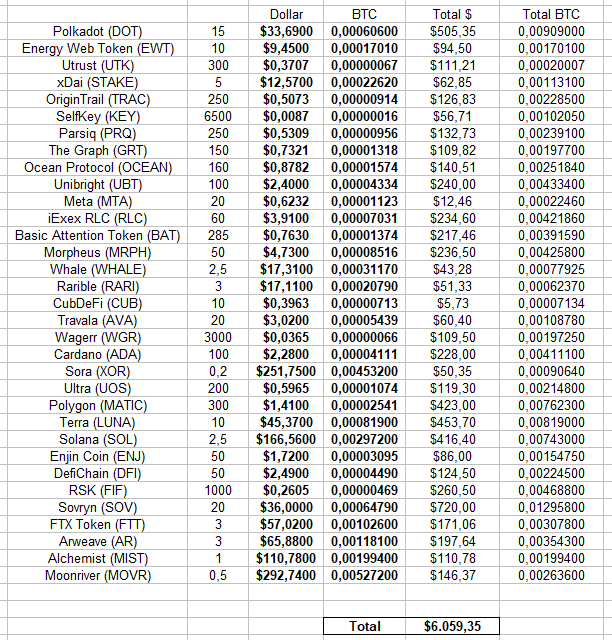 There was 1 main winner last month from all the coins I have in this portfolio which was Sovryn (SOV) going from around 9$ to 36$ and it is not my biggest position. Overall I'm still beating BTC with and have a total of +76.42% Increase in value despite getting in at the worst possible time after it 'already pumped' on many of the positions. At some point, I will go in profit taking mode turning some of the gains into more stable assets for for now I guess I will continue to add more coins the coming 30 days.

I'll be back with another update next month!

Crypto Exchanges that I am using...

Important: By no means take this post and these coins as investment advice. Rather see them as entertainment or motivation to possibly start your own altcoin portfolio growing it over time.