I am getting more serious about playing the Sorare.com NFT Fantasy Football Game this new football season and will be keeping track of my personal activity in this series of posts.

First off and most importantly, I am having a lot of fun with the game which for a Play2Earn game is not easy to do. This even more than potential earnings is the main factor for me to play them and it is the reason I am 'only' sticking to 3 Play2Earn games for now (Mobile MiniGames / Spinterlands / Sorare) since I highly enjoy each of them and think they have great potential going forward.

So I submitted 2 teams this week. My main 'strongest' team in the Limited Europe Challenger League & a team with leftover player cards in the Limited All-Star league. I had no idea what to expect in terms of the ranking I could be able to achieve and finished 2186th out of 4963 entries. While I'm still far away from a top 400 Spot which pays out a reward, at least I now have a goalkeeper with Ilic that is expected to play and take points. 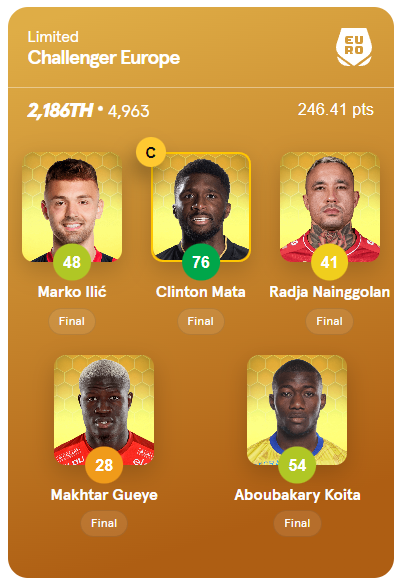 At 246.41 points, I was 107.93 points away from a top 400 spot. This with no crazy expensive players in the team and none of the players having stand-out performances with 1 player only playing 10 minutes. So there certainly is hope to at some point this season actually start earning something from the leaderboard reward. As I field players, they also get a bonus % of points earned which will help going forward.

I have some funds left in my account to buy more players. I don't aim to buy expensive players to be more competitive in the leaderboard. They are simply too expensive with a lot of downside risk in case they get injured, drop form, or leave the team for another league that is not supported. I'm also not going for very young players that have future potential since it remains a question how Sorare will survive the test of time.

Instead, I'm looking for players with potential that are out of form, currently injured, or unknown with an eye to having some of them turn into solid performers which makes their price increase. Also older players that don't have much future potential which makes them cheap while they are regulars in the team with good performances are an option to buy. 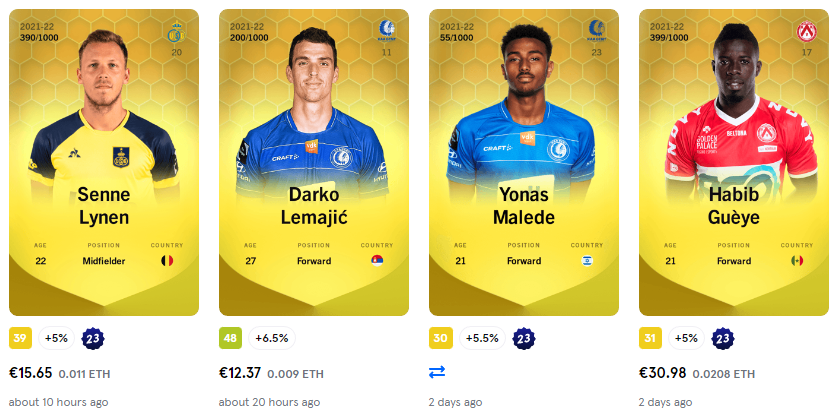 Habib Gueye: This was the most expensive one at 30.98€ (right now the cheapest price on the market is 34.39€) as he is the main striker of Kortrijk. Tall buy, young, lots of potential and should always be in the team. Last season he got injured which contributed to Kortrijk going on a really bad streak. He's back now and I hope for him to become the strong striker that scores the most goals for Kortrijk.

Yonas Malede: He is loaned from AA Gent to Mecheken and is a young player with potential that is kind of a late bloomer similar to Storm. in Mechelen he should be able to get more minutes. I picked him up doing an offer to someone that was selling for 7.50€.

Darko Lemajic: So Tissoudali will most likely be leaving AA Gent as he got a big offer from Qatar yesterday. AA Gent isn't wide on strikers and Depoitre is often injured which makes Lemajic have the potential to become their main scoring striker. So far he kind of impressed when it comes down to creating chances but he at the same time was quite unfortunate in his finishing. This left him on the bench most of the time. He is also quite high in the mind of the coach while fans are not convinced yet because of the missed chances the matches he played. He did play and score in the 1st match of AA Gent this season. 12.37€ feels like a good deal for the potential first deep striker from AA Gent.

Senne Lynen: He was one of the young players that showed a lot of potential last season in Union before he got injured quite badly and was out for the entire season. Now he's back and started in the 1st team on week 1. I bought him for 15.65€ (which I feel is at the high end) more with an eye to potentially be able to field a Europe mid-week team.

I swapped Makhatr Gueye who started on the bech for Oostende with Lemajic who I hope will get another starting place in the team with Tissoudali being highly unlikely. Habib Gueye who should start for Kortrijk who play against one of the worst team replaces my favorite player to watch Koita should have a hard time against Gent. The rest stayed the same.

I'm having a lot of fun with Sorare at the moment and it's quite deceptive as similar to Splinterlands, spending money doesn't necessarily mean that you are losing that as it is possible to sell your collection on the market possibly for more if you play it right. Anyone interested in joining me on my Sorare Journey, Using my Sign-Up Link will get you a free Limited card on buying once you collected your 5 first cards.

I'll bring an update next week with the results and how I'm moving forward.