@cryptonotes 58
over 1 year ago
LeoFinance 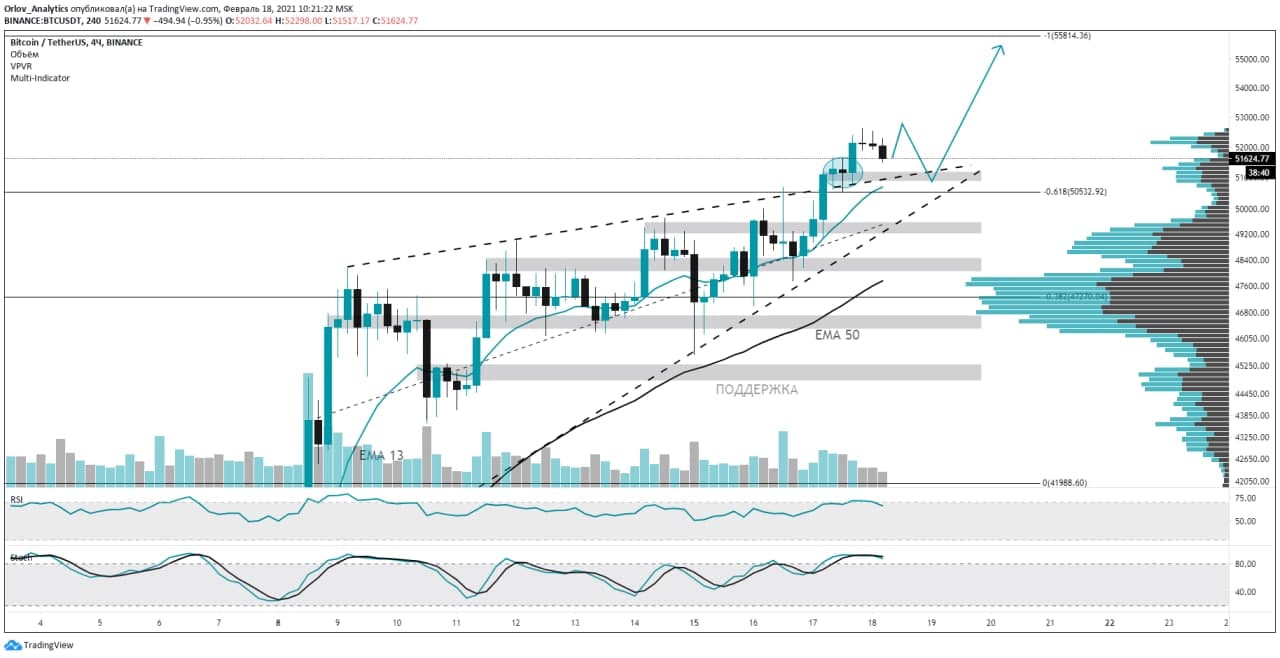 #BTC. As expected, Bitcoin broke through the resistance at $ 50,529, setting a new price high of $ 52,618 on the BInance exchange. When the first cryptocurrency price reaches $ 53,680, the capitalization of "digital gold" will become $ 1 trillion, I think this event is not far off. I expect to see the consolidation of the asset near the upper edge of the "pennant", indicated on the chart near the accumulation block at $ 51,000, where the exponential moving average 13 EMA 4 H will act as a dynamic support level. The lower edge of the pennant is likely to retest before the next upward movement. The volumes are, of course, somewhat confusing, showing price divergence. In general, the instrument is in the stage of consolidation, in order to understand the scenarios for the further development of the situation, it will be necessary to look at the price reaction at the level of $ 51,000.

#ETH. The asset has set a new value record - $ 1919 on the BInance exchange. Ether shows strength in pairing to #BTC, increasing its value to Bitcoin by 3%. The instrument is consolidating below the resistance level of $ 1919, breaking through which will open the way to the $ 2080 mark, where the Fibo resistance level is located.

Cryptocurrency exchange Coinbase, which is preparing to go public in a few months, is valued at $ 77 billion based on the company's stock trading in the secondary market info ... The largest cryptocurrency exchange in the US is listed on the Nasdaq Private Market at $ 303 per share. This means that the company's total value is about $ 77 billion, which is more than the owner of the New York Stock Exchange Intercontinental Exchange, whose capitalization, according to Yahoo Finance, is $ 63.167 billion. Coinbase's pre-IPO futures contract (CBSE) has grown in 3 times from the moment of listing on the FTX exchange. This is an indicator of the great interest of investors in the upcoming listing, and as a result, in the entire field of digital assets. The estimate is still preliminary and the share price may change by the time of the direct IPO, however, the numbers speak for themselves, there is a great demand for cryptocurrency platforms of this scale. This suggests that we are in the early phase of a new growth cycle for the digital asset market.

The token of the largest cryptocurrency exchange BInance (#BNB) has updated a new record value of $ 177, showing an increase of 30% (against the dollar) over the past day. The reason for this was a number of strategic decisions - the organization of various liquidity pools on the exchange itself, an increase in demand for #BSC when a large number of decentralized platforms are launched on the basis of Binance Smart Chain. Also, the reason for the growth of #BNB is its similarity with Coinbase, which was estimated at as much as $ 77 billion (Binance's capitalization can be calculated by the capitalization of the exchange token). Binance is no worse than Coinbase, so #BNB capitalization should catch up with Coinbase's capitalization.

Frontier's partnership with the Travala project, which allows #FRONT holders to book hotels and homes, as well as purchase tickets for 600 airlines, drove the #FRONT token up 100% (against the dollar).

The new #SWINGBY staking program Pancake Swap has increased the value of the #CAKE asset by 30% (against the dollar).

The Nasdaq leads Wall Street's declines on the back of major tech stocks slumping as investors await the January Fed meeting minutes and amid reports of Congressional consultations with the White House on leverage over Big Tech. Stronger telecoms, oil and gas and consumer services sectors boosted the Dow Jones and the S&P 500. At the NYSE close, the Dow Jones rallied 0.34%, hitting an all-time high, and the S&P 500 down 0.06% , the NASDAQ Composite Index lost 0.65%.

The total cryptocurrency market capitalization has reached a new record level of $ 1.571 trillion, surpassing Google Corporation ($ 1.43 trillion) in terms of capitalization. Upon reaching a new price maximum, the main cryptocurrency went into correction along with its dominance, which decreased by 2% in a day from its peak. Another window opens for the recovery and growth of altcoins.

Congratulations @cryptonotes! You have completed the following achievement on the Hive blockchain and have been rewarded with new badge(s) :