OK, I admit this may not be the most "apples to apples" comparison out there, but just for entertainment purposes, take a look at this:

As I checked Coinmarketcap a few minutes ago, I took this screen shot:

So, just for grins, I went and found a pretty current list of GDP (Gross Domestic Product) by country... this being a World Bank list from 2020: 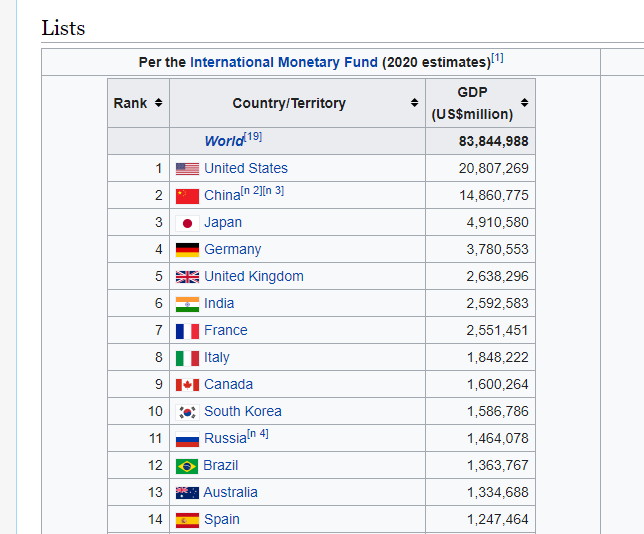 If this were an actual possible comparison, the aggregate market cap of the Cryptosphere just edged out South Korea for 10th spot, in the list of the world's largest economies!

I think it's pretty safe to say that we have reached a point of saturation where it has become much too late to stuff the proverbial "genie" back in the bottle.

We sure have come a long way since I first heard about an "Internet based type of money" they called Bitcoin, back in late 2012!

And we've only just BEGUN!

(Note: This is not meant to be a "serious" comparison — I'm well aware that the information I shared here is NOT economically sound, or anything like that! But it's still a moment to pause and consider, I think)

Have a great remainder of your week!

Of course, Apple has a current market cap of $2.2 trillion so.....when you look at it that way, we've still got a loooong way to go. I'm more interested in watching Bitcoin hit $1T on it's own and starting to make a run at gold. Interesting post though...thanks!

Oh yeah, it was a pretty silly and frivolous comparison... but still, definitely a reminder that this whole show is getting big enough to have a serious impact on the world.

I'm pretty sure BTC will get to the $1T market cap pretty soon...

@curatorcat.leo this shows that the cryptocurrency is another world that will keep creating alot of wealthy and success people ,that is why we all need to be excited that the world is finally embracing cryptocurrencies....

I'm sure it is just going to keep growing and growing, very much like the Internet, itself. Remember, it took 25 years for the web to get from a few early pioneers to where we are today, where almost everyone is connected.

Wow! That calls for a !BEER

Thanks! It was just a fun comparison to run, even if it is mostly meaningless, in the real sense.

Hey @curatorcat.leo, here is a little bit of BEER from @fiberfrau for you. Enjoy it!