Binance BUSD Stablecoin Is Growing The Most! Lets take a look

In a recent announcement Binance stated that starting from September 29, 2022 users that have USDC on their exchange will receive BUSD in an auto conversion process. All pairs against USDC will be replaced with BUSD. Except for USDC, two other stablecoins will go in auto conversion process and that is TUSD and USDP.
What this means is that Binance is consolidating its stablecoins listings and now it has Tether USDT and BUSD, effetely delisting the three others.
After this announcement the Binance BUSD stablecoin started increasing its market cap, while the other two major ones USDT and USDC were stagnant or declining. Whats interesting is that the auto conversion hasn’t happen yet. 2022 has extremely interesting in the stablecoins arena. The Terra UST fiasco caused a widespread fear in the overall industry. A 20 billion stabelcoin went to almost zero in a few days. A meltdown in a massive proportions. This caused panic and billions were withdrawn from the others stablecoins as well.
Tether USDT has seen a real-life stress test with more than 10 billions looking for the exit door in days. Almost 20 billions in a few weeks. Tether managed the situation and provide all the exit liquidity that users were looking for. In the same period the market cap of USDC and BUSD has increased a lot.

A few months later and now Binance is making another move consolidating all the stablecoins on its exchange into Tether USDT and its own BUSD.
Let’s take a closer look!

BUSD started its journey in the second half od 2019.
Here is the chart for the BUSD printed per day. 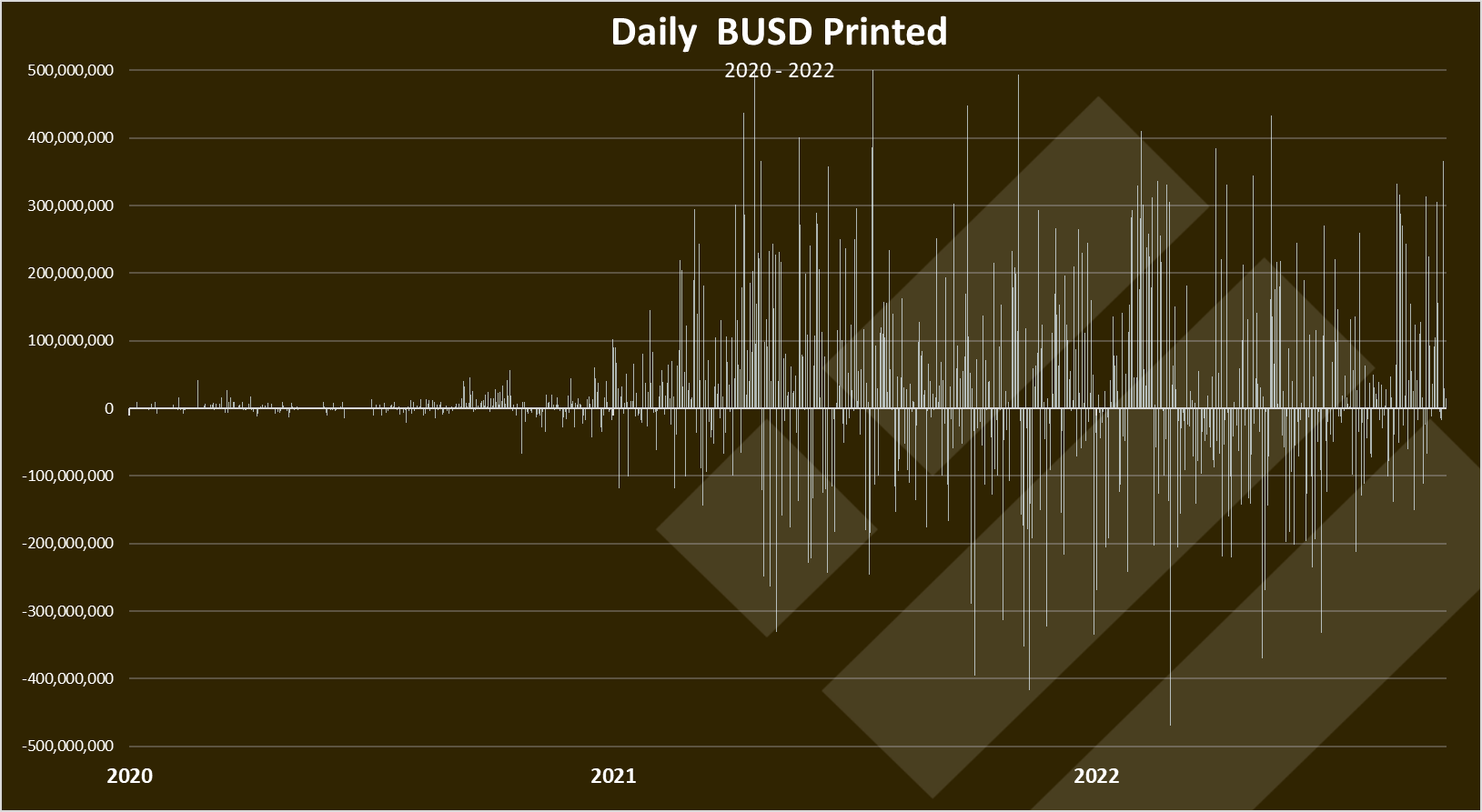 As we can see in the first year 2020 the numbers were quite small in the both directions. Some increase at the end of the year. A lot more volume came in 2021! In that year BUSD really came to live, adding a billion on a day in the market cap on a few occasions.
The chart above seems quite volatile with ups and down on a daily basis, but overall it seems that there is more printing.

Here is the monthly chart. 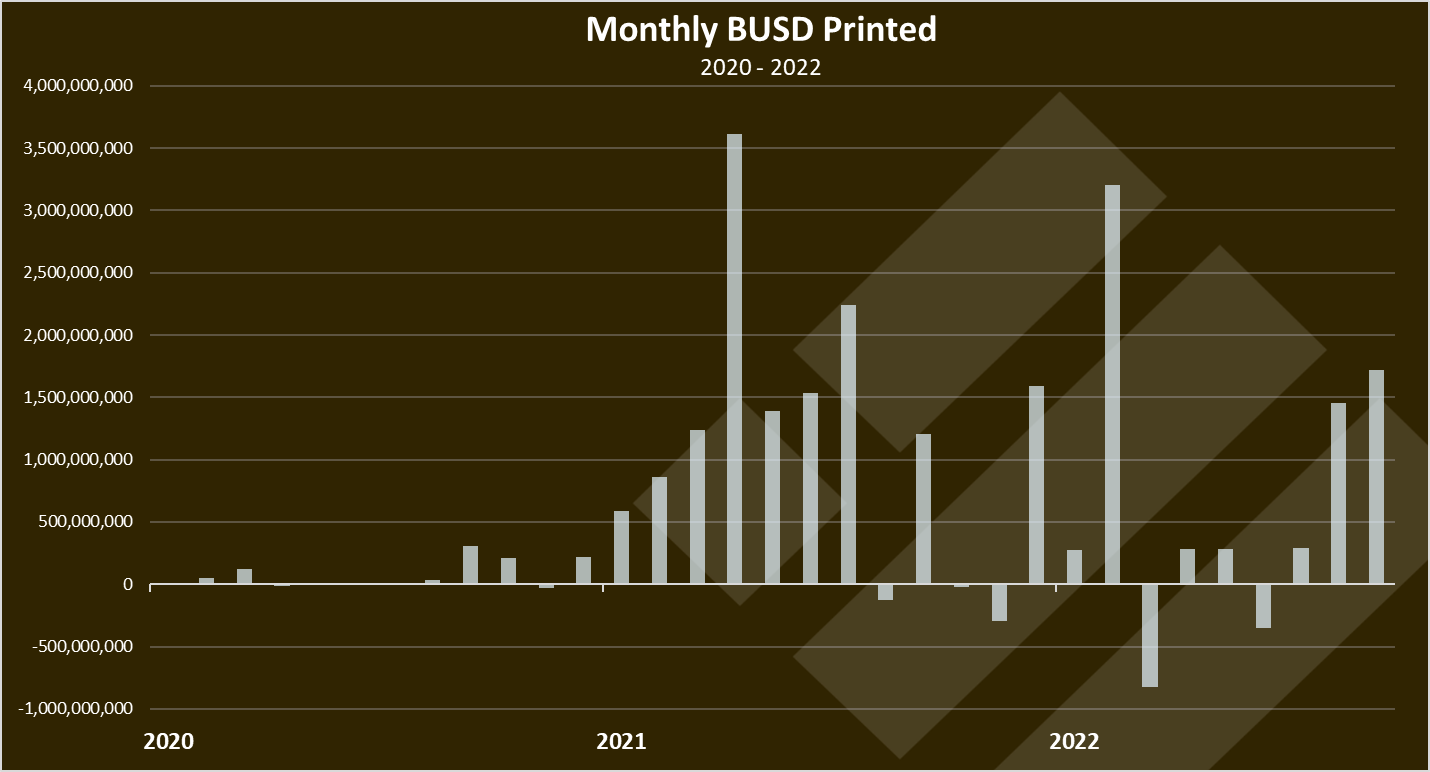 A clearer picture here.
We can see that in the first half of 2021 BUSD had a massive expansion with a record of 3.5B in April 2021. In the second half of the year there were positive and some negative months but still an overall uptrend.
Interesting that 2022 started quite good for BUSD with a massive 3.2B printed in February 2022. The next months had some smaller numbers, but the last two August and September are again in the billions. Note that September is not over yet.

When we summarize all the above we get the supply.
The chart for the BUSD supply looks like this. 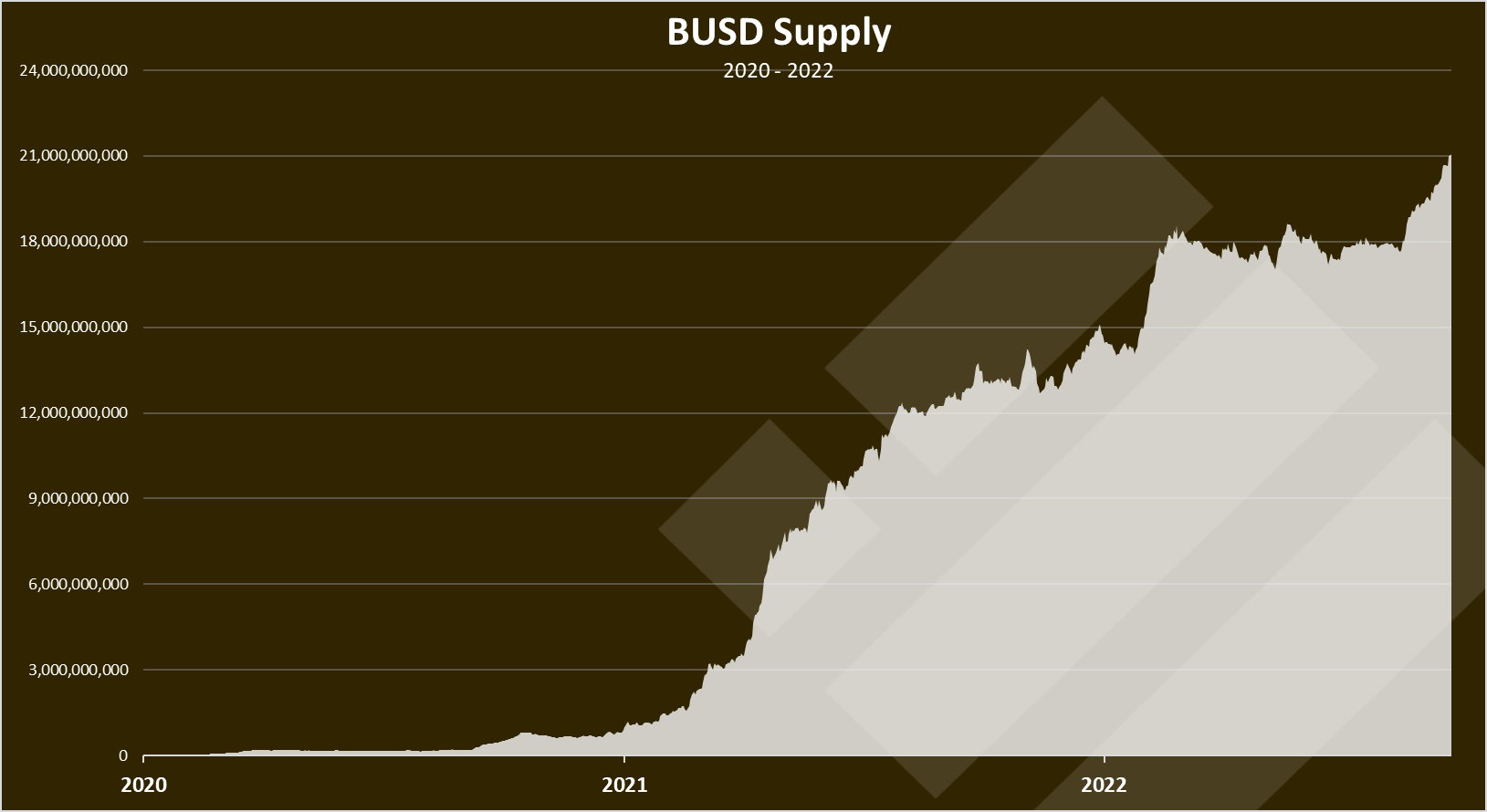 At the beginning of 2020, BUSD supply was almost nonexistent, or less than 20M. It stayed at those level until the second half when it started growing.
The real growth for BUSD happened in the first half of 2021 when its market cap reached 10B, adding most of that in six months. Then a small slow down and again a big increase at the beginning of 2022, and now we can see the growth again with 3B added in a short period of time.

In the last weeks BUSD surpassed the 20B market cap for the first time. Atm it stands around 21B and growing by the day.

BUSD VS USDT and USDC

How is BUSD doing against the other top stablecoins like Tether and USDC? Both of these have a longer history than BUSD, especially USDT that is the first and still number one stabelcoin in market cap. 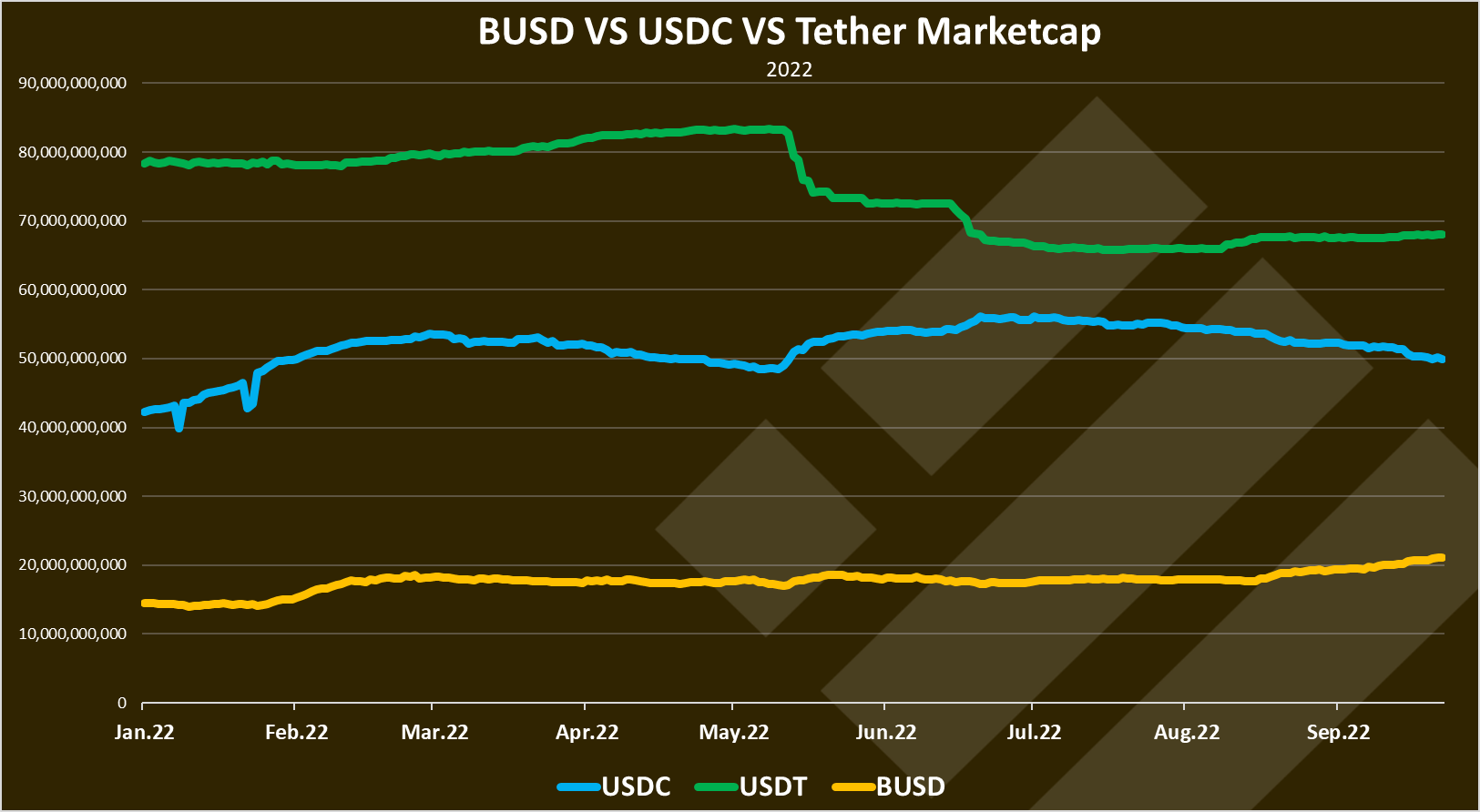 This is a chart for 2022 only.
We can see that Tether USDT and USDC had some bumpy ride in 2022, especially in May. This is around the time when the Terra UST imploded. A lot of liquidity exited Tether than and entered USDC. In the same period BUSD has seen some drop but then a fast recovery and a growth.
For a long period of time BUSD was just bellow the 20B market cap, then in the second half of August it started growing and surpassed the 20B mark.
In the last two months USDC reduced its market cap from 53B to under 50B now. Tether seems to be stagnant, hovering around 68B. BUSD is the only one to grew in the period adding 3B more. Its still the smallest from the top three and has a lot of room to grow.

After a period of declining market cap, Tether has now stabilized while USDC started loosing in its market cap, while BUSD is the only one from the top three to be growing. This is happening in quite bad market conditions showing the dedication and the potential for BUSD to grow.

Wow. Things are becoming interesting. Perhaps the downfall of UST has a greater implication than we all thought. Thanks for the analysis

Wow awesome and thanks for sharing.

BUSD has the potential to get on top.

Interesting that Binance is delisting some stablecoins and auto convert for the growth of BUSD. The power of CEX is at play.

We should be learning from actions like this to limit our usage for cex.

BUSD is definitely going to lead the market. How can you fail if you have the biggest exchange market as your resource?

The only stables I use are BUSD, USDC, and HBD of course. I'm sure some heavy blows are on the way for many stablecoins...

It is really nice to know about all this analysis.

So much potential, I'm more excited to know that the Bitcoin downturn doesn't affect Binance too much anymore (at least not like it used to), they have been solid for quite some time now by diversifying their assets.

But I don't have much confidence in Binance, and I don't know why. Still looks amazing

Yea thats a good thing. Only use CEXs forna short period of time and just a small part of your funds.

Great analysis am looking up to trading some

Excellent argument and excellent analysis. Today the BUSD, in my opinion, is considered one of the most reliable stablecoins

Yea they seem to want to position themself as that.

Thanks for this data, i needed it mostly, Good day.

It would be great to see an article on how these stablecoin issuers are making money. I'm interested in the business side, but never found enough time to research into that.
!PIZZA
!LUV
!CTP

Binance’s new stablecoin rules ultimately may serve to cement its own dominance over crypto .

It seems that this data is indicating that more people are putting their trust on CEX.
I am currently using BUSD for my personal transactions on Binance as I cannot directly use yet my cryptocurrency outside the blockchain.

Thank you for sharing the information. 😊