Unlike your traditional media that has only one way and one interface to interact with, Hive offers a multiple of them, allowing you the freedom to choose your favorite one. Some of them filter out the content and focus just on a specific content.

Using Hive, for me personally, just made me realized how much constrained we are on traditional web2 apps like twitter. I use multiple frontends on Hive for different purpose and really like the freedom to shift between them and select what I want.

Let’s take a look of the posting on the top hive frontends and their individual share. 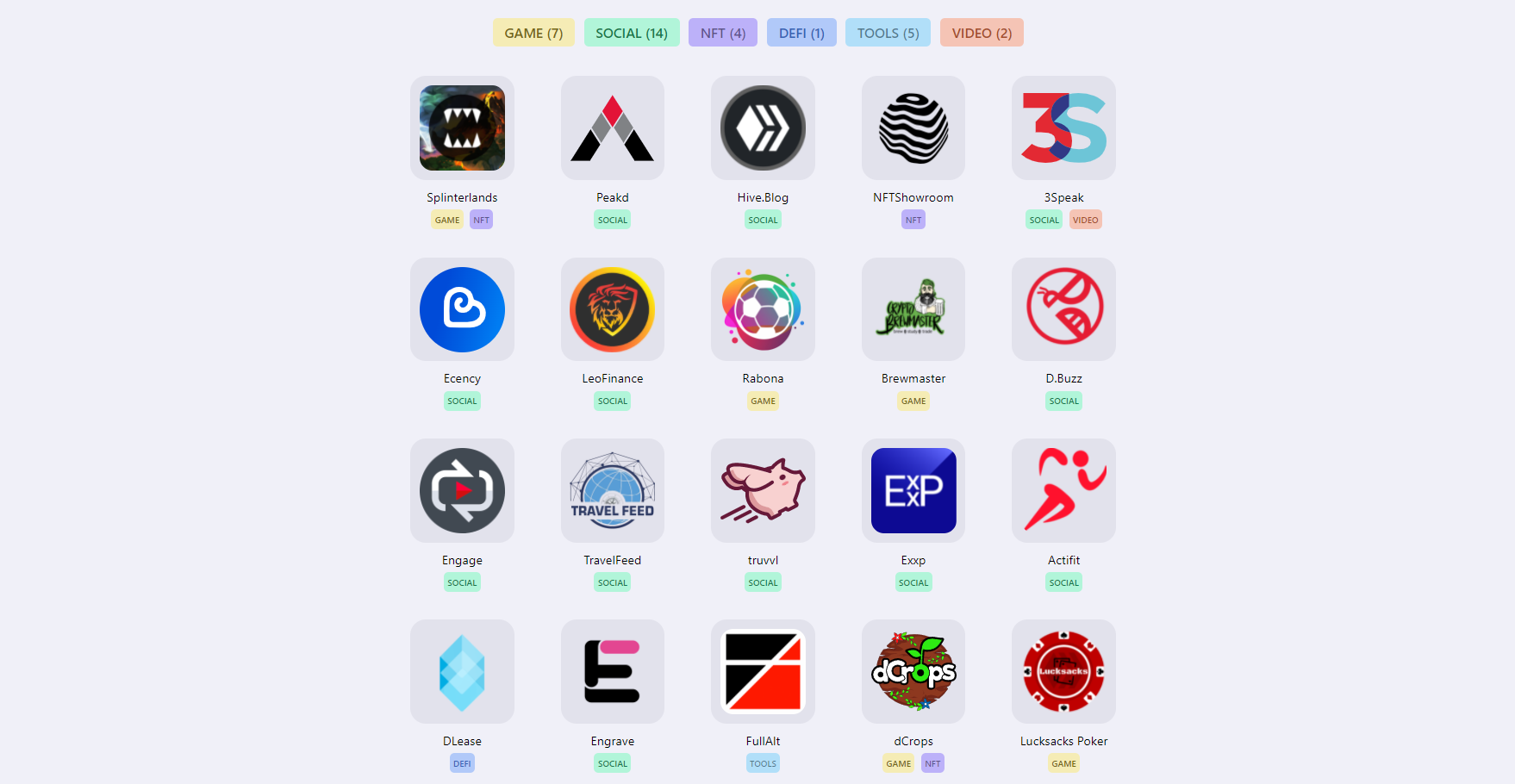 We all know blogging dApps are not the only ones build on Hive. Games are taking advantage of the Hive blockchain and we are already seeing more of them build each day. Splinterlands opened the gate for games on Hive, and now we have many more.

Here we will only be looking only into the blogging apps:

We will also rank the top frontends by number of in the last 30 days.

The generic Hive frontend. Its open source as well. Here is the chart. 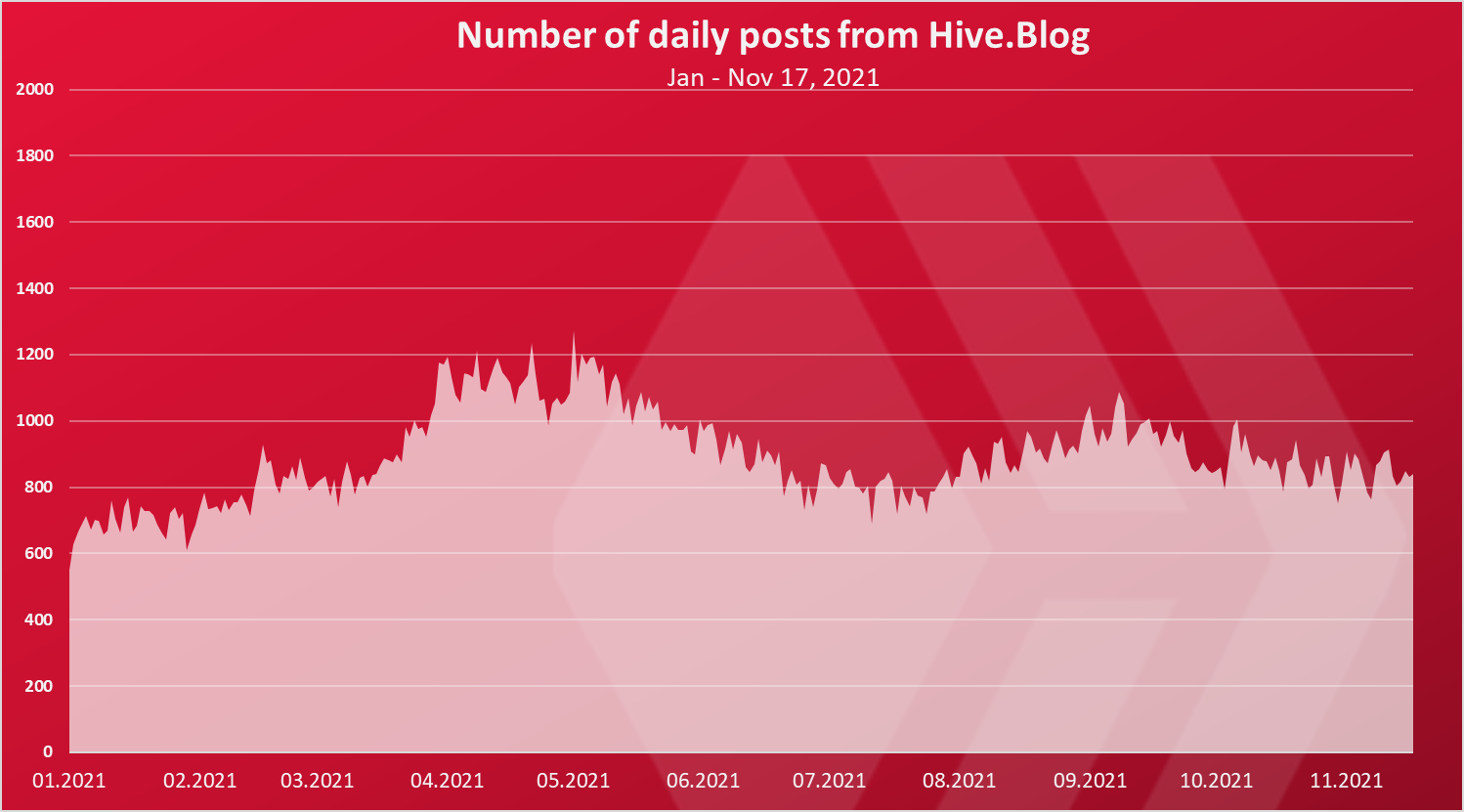 According to a lot of users one of the best frontends for Hive.
Here is the chart. 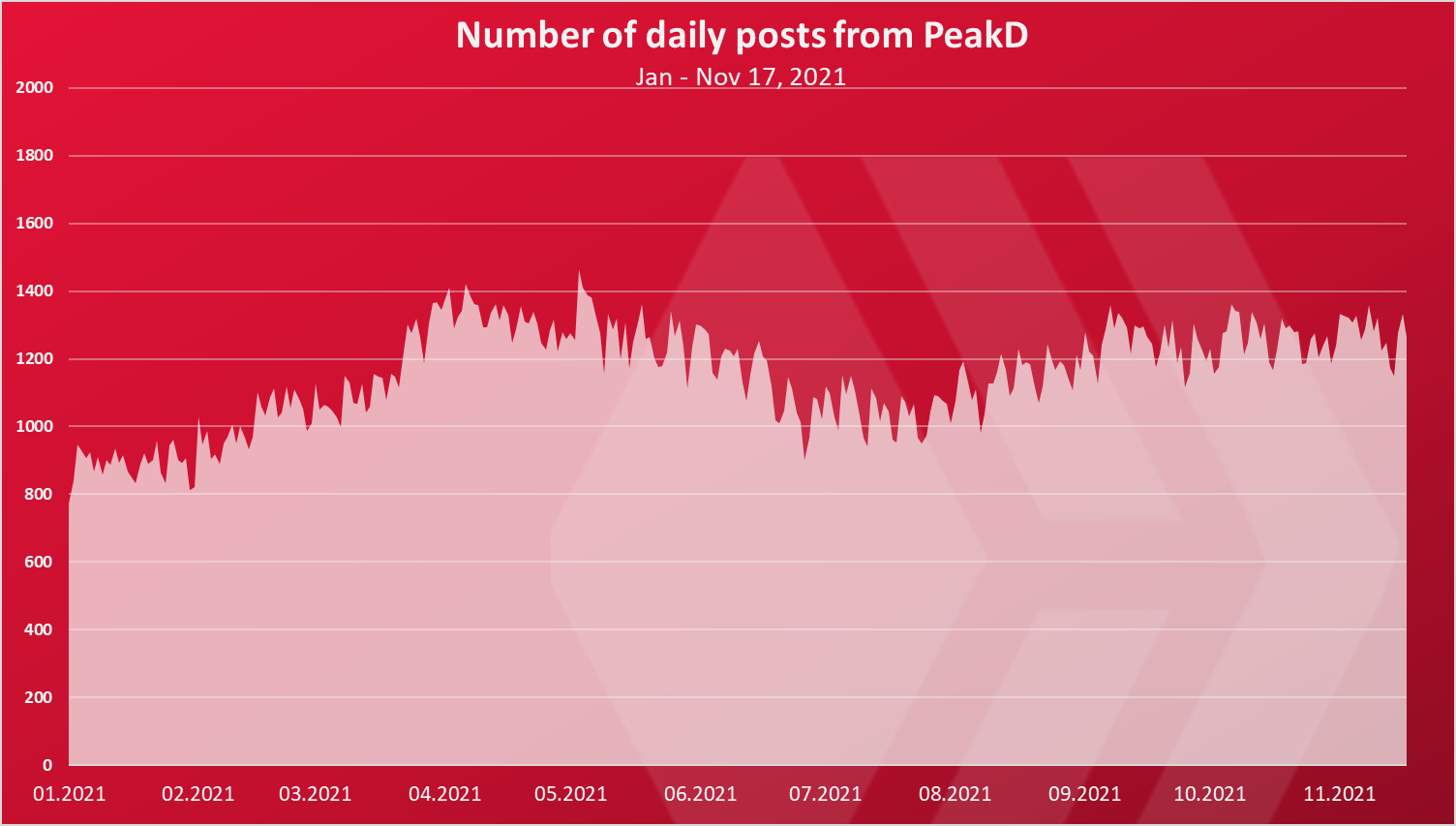 Ecency has been around for a long time as well. They have a very good frontend as well. Some say it is the fastest ones. One the best apps included. 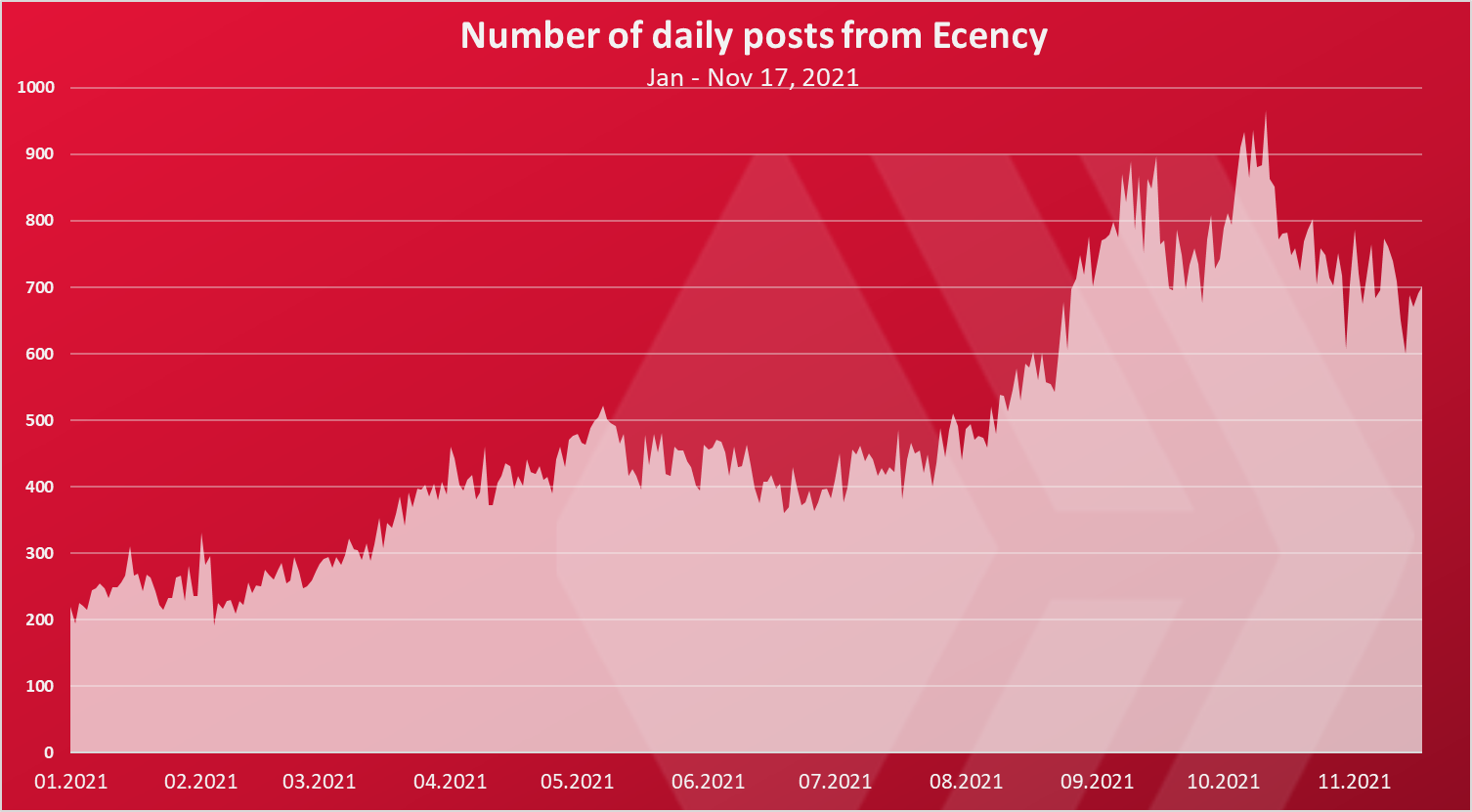 Ecency has seen the highest increase in the numbers of posts from the top three. After August the numbers increased significantly from under 500 to almost a 1000 posts per day.

The chart for LeoFInance. 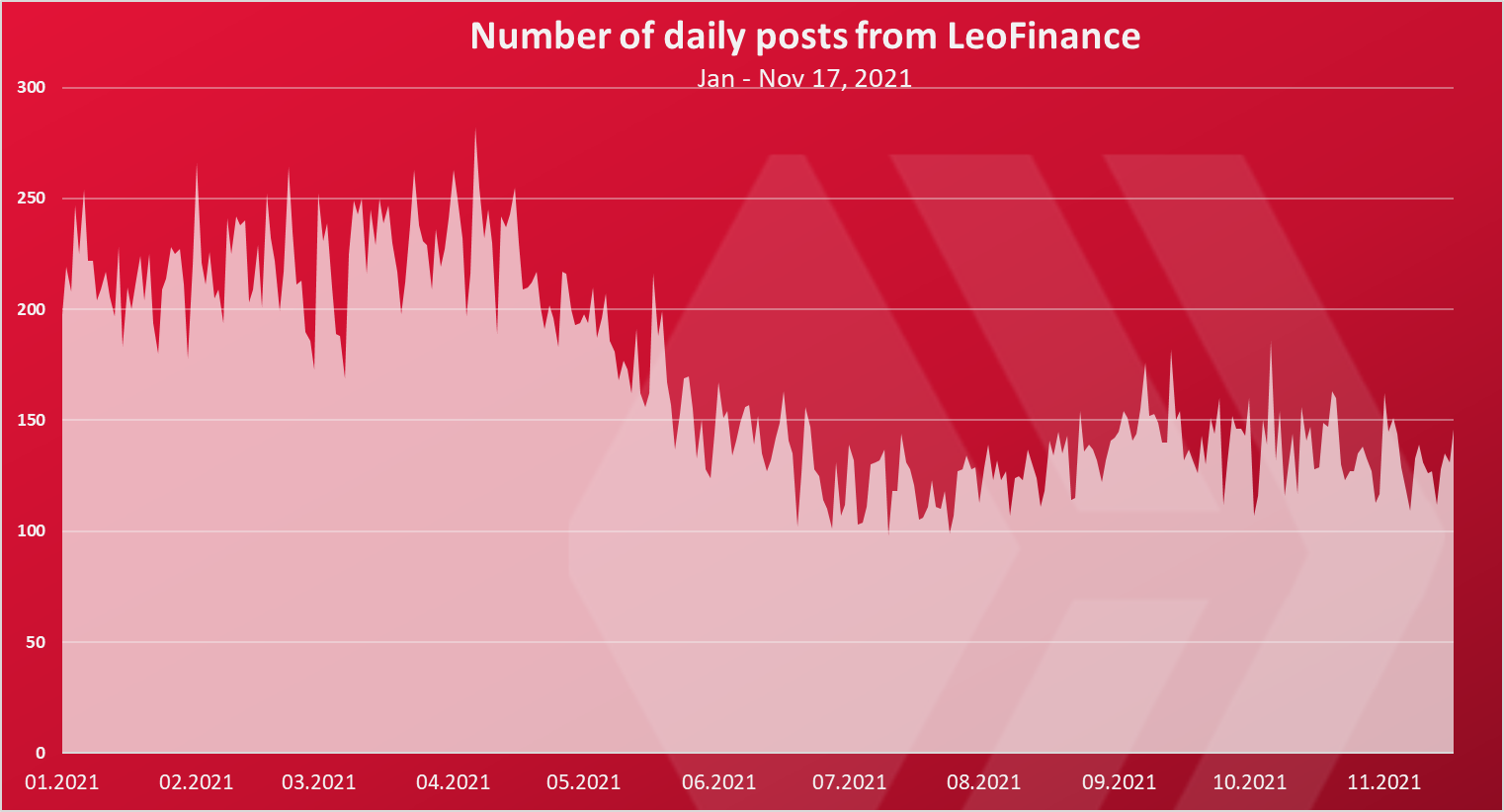 Leofinance has seen some decrease in the numbers of posts coming from its frontend in 2021. The year started from around 250 post per day and now it is around 150. Trend most likely connected to the price of the LEO token.

The number of posts/videos from the Hive video platform. 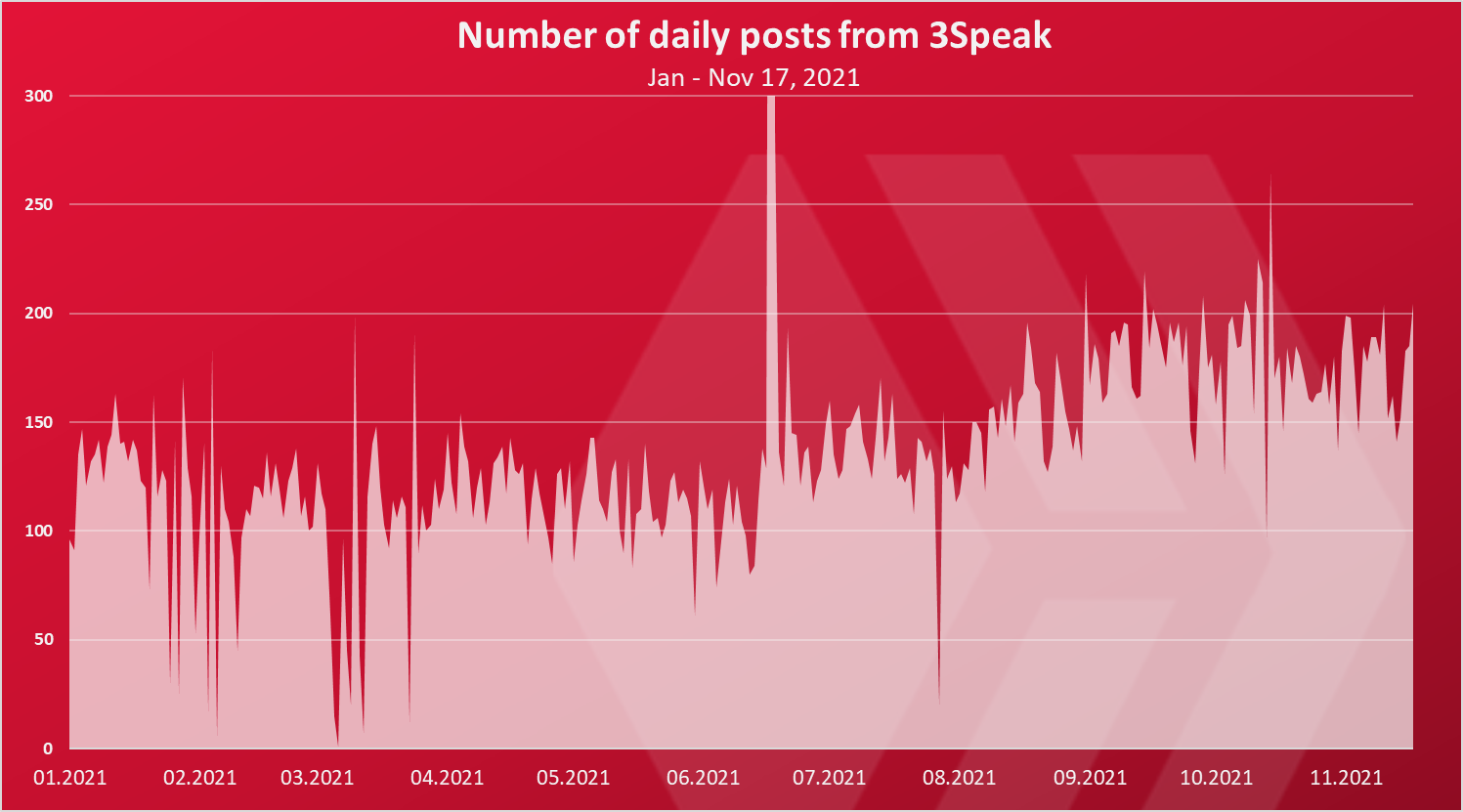 The video platform on Hive, 3Speak. Some sharp downs here, probably due to the app having issues. Overall a steady growth all over the year for 3Speak, starting from around 150 and now at 200 video uploads per day. 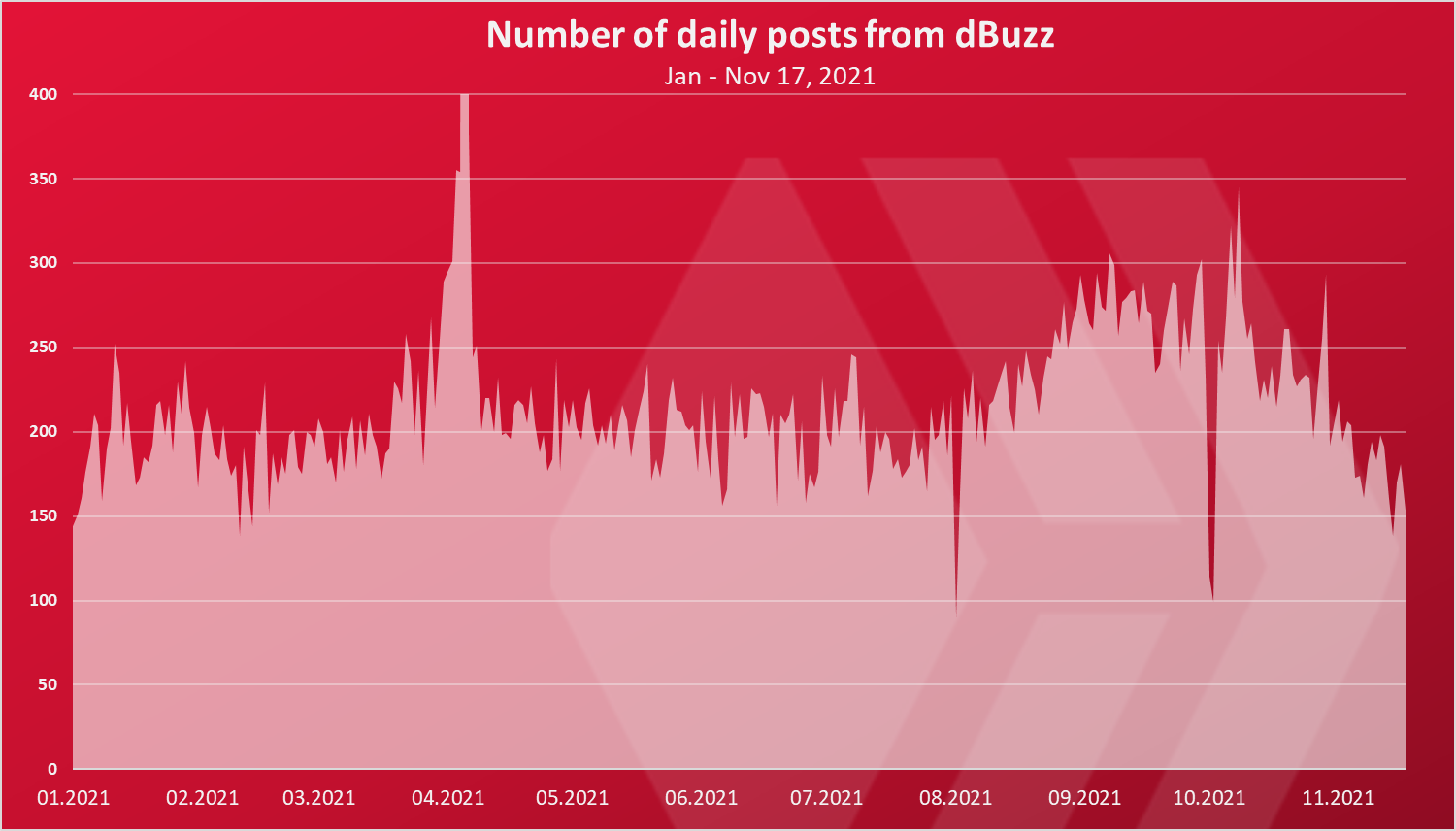 dBuzz is a short form application and we can see quite a growth in the period. A steady first half of the year, then some ups and downs in the last months. A 150 to 200 posts from dBuzz in the last period. 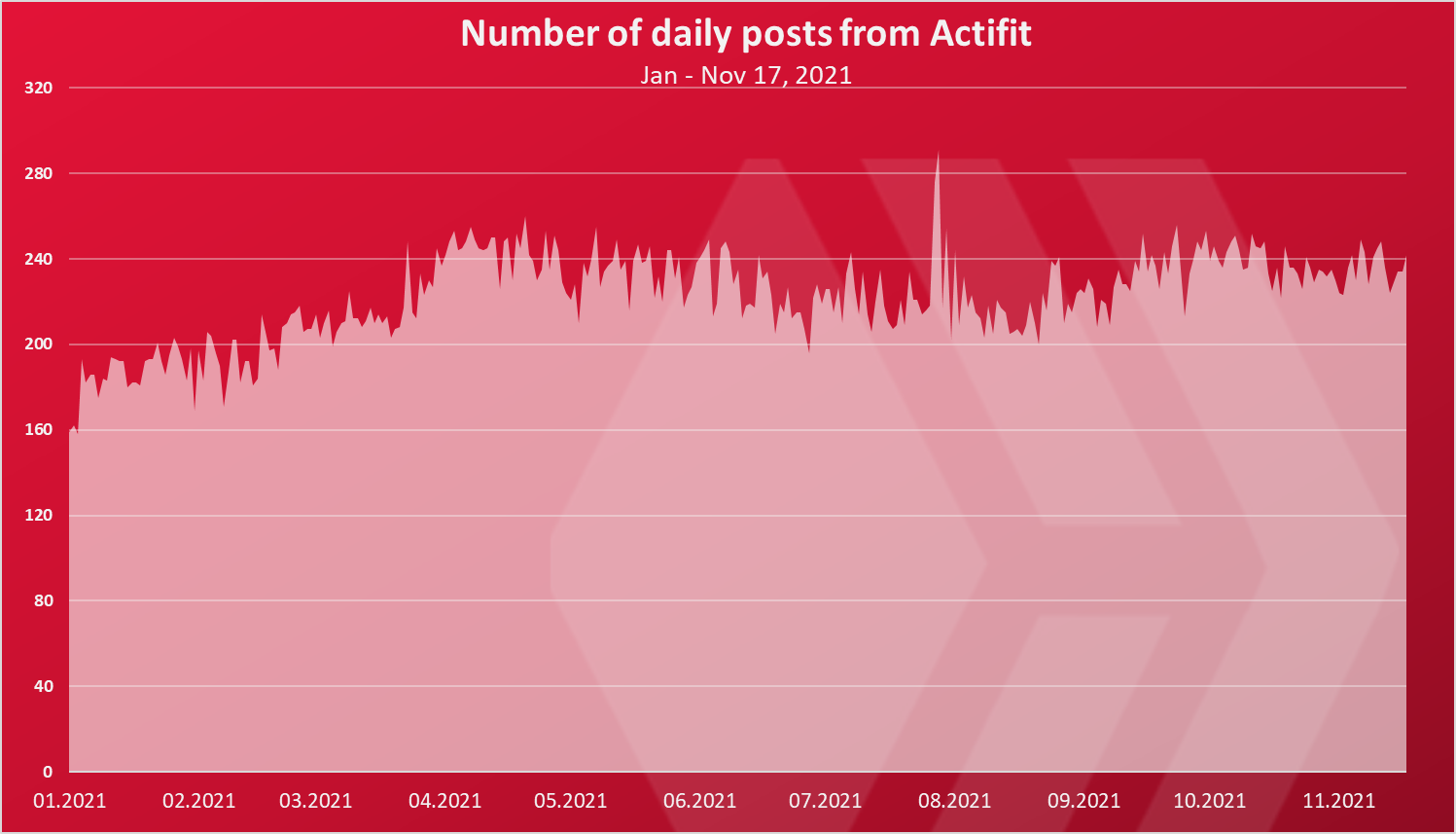 Actifit is one of the first Hive apps. It is a fitness app where users share their step counts per day. Quite a steady number of posts from Actifit in 2021 with numbers in the range of 200 to 250 posts per day.

Number of daily posts from all Hive frontends

Here is the chart for all the Hive frontends posts per day combined. 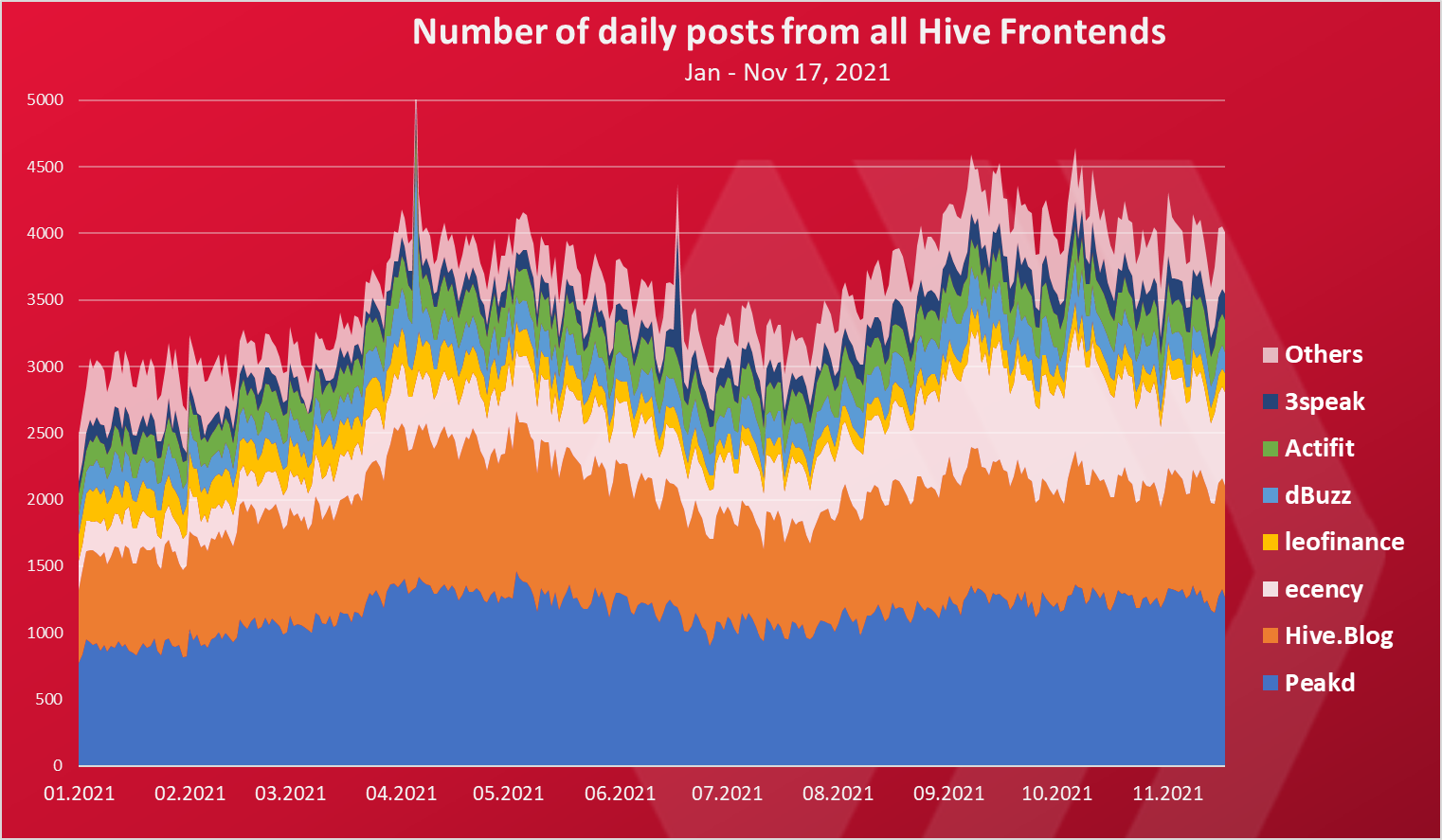 At the beginning of the year hive.blog and Peakd are dominant, but in the last months @ecency has taken a large share in the number of posts as well. This will the major three apps where the posting is coming from in the last period.

Here is the chart for the overall number of posts from the top Hive frontends for the last 30 days. 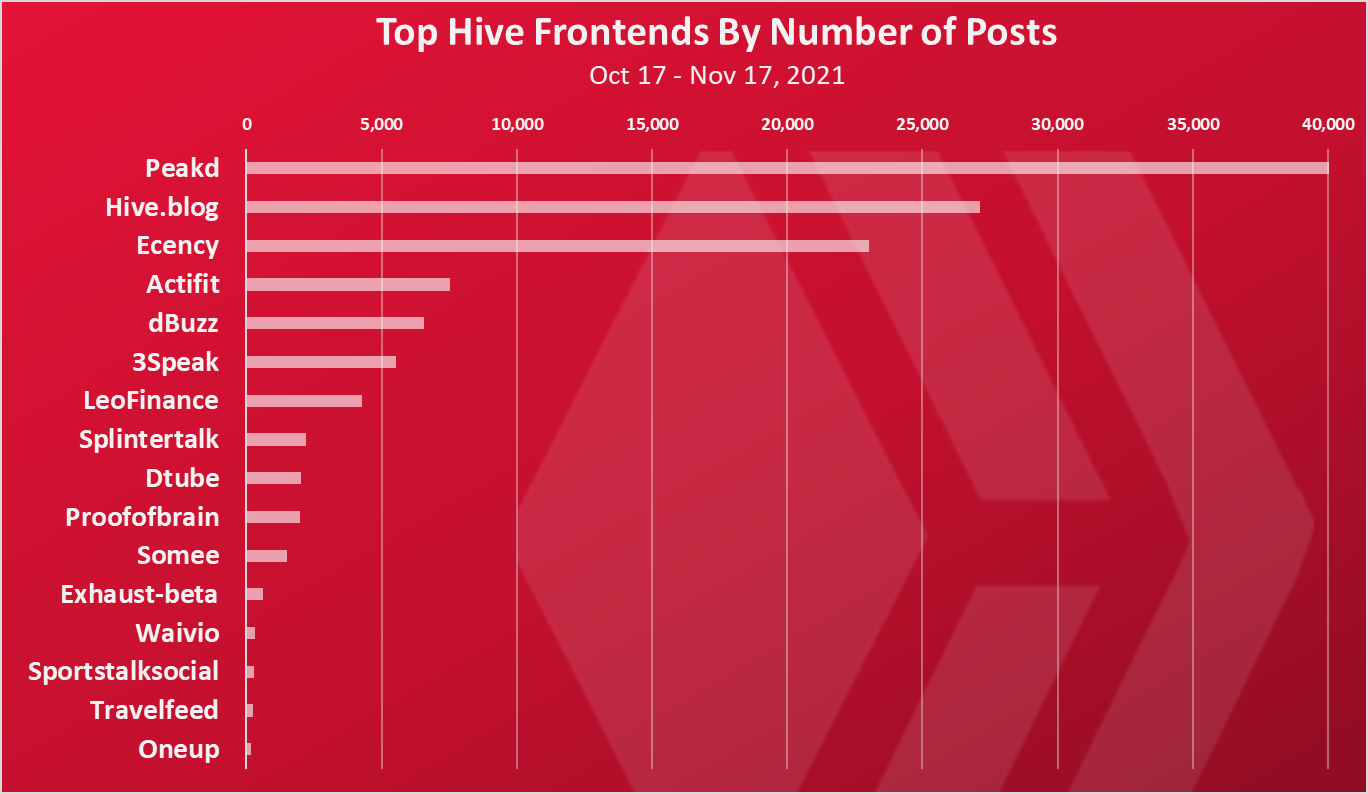 Peakd is the most used Hive frontend now. It has surpassed the Hive.Blog frontend by a lot. A 40k to 27k posts in the period. Its not even that close.
Ecency is now also very close to hive.blog and it has been growing a lot. If this trend continues soon Ecency might come to the second place.

This is generally interesting development, as we can see another frontend taking over the Hive.Blog. Back in the Steemit days, the blogging was heavily done from the steemit.com frontend.
This shows that there is more than one dominant web build on the Hive blockchain, and it is overall healthy for the ecosystem. It will be great to see more dapps build and attracting their own audience.

Thanks a lot for this thorough analysis, well done!

I was looking for @exhaust and you included it, thank you for that too.

My favourites are @ecency and @peakd. I use daily @actifit and @exhaust too.

Exciting for Hive and interesting to see how the front ends are performing, well done in presenting in a way that will help many to understand the Hive Blockchain.

Very interesting. Thanks for doing the analysis.

So many wonderful frontends to chose from...

I read today that leofinance comes right after actfit... I think there might be an increase in the use of Leofinance soon, thanks to the mobile application.

Thanks for the analysis. I currently use ecency and leofinance a lot more than usual. Peakd is my go-to front-end. Might get into actfit when I begin to "act fit".

Even I didn't know about all these front ends.

Good to see Ecency is doing well. Their mobile DApp brings a lot of the younger (mobile only) generation to Hive.

Yes I think the ecency app is getting tractions

I raise my hands. I am currently 29 years old, and nowadays I am using Ecency on my smartphone (Samsung Galaxy A12). This is favorite Hive application. I started using it, when it was eSteem on the Steem blockchain, and that was also my favorite Steem application. Greetings from Hungary.

Very thorough thank you for taking out time to do this

Great to see PeakD and ecency moving past the gross Hive.blog.

Too much money and time is focused on marketing 'the Hive blockchain' instead of the working dApps built on top of it.

What we're doing could be compared to promoting 'the internet' instead of promoting 'Facebook' which runs online.

Normal people don't give a shit about the tech.

They give a shit about well-branded apps that solve their specific problems.

Yea, I guess in time we will get there ... apps are starting to build their own brand and their thing with the hive tech only as a backend

I think it is actually good to see the front end competition. We, (the Hive Block Chain), have enough active users that the active users want choices in how they surf the block chain, and that there are developers and investors out there ensuring we get the best from them.

For some reason, I have a strong homesickness to the generic Hive.blog frontend, feel comfortable reading posts on it

I need to get into Actifit, thanks for the reminder

look like Dbuzz is doing pretty good then. Keeping in mind that not every Hivers in short content,Dbuzz still has some nice numbers.

Ecency is doing well, thanks for this data.

great thumbnail and information! :)
sometimes we really need to see what we accomplish together....

Yes the next few years are going to be very exciting as more people are drawn to the blockchain the more communities will be created producing even better development in the future.
Great post have the best day @dalz 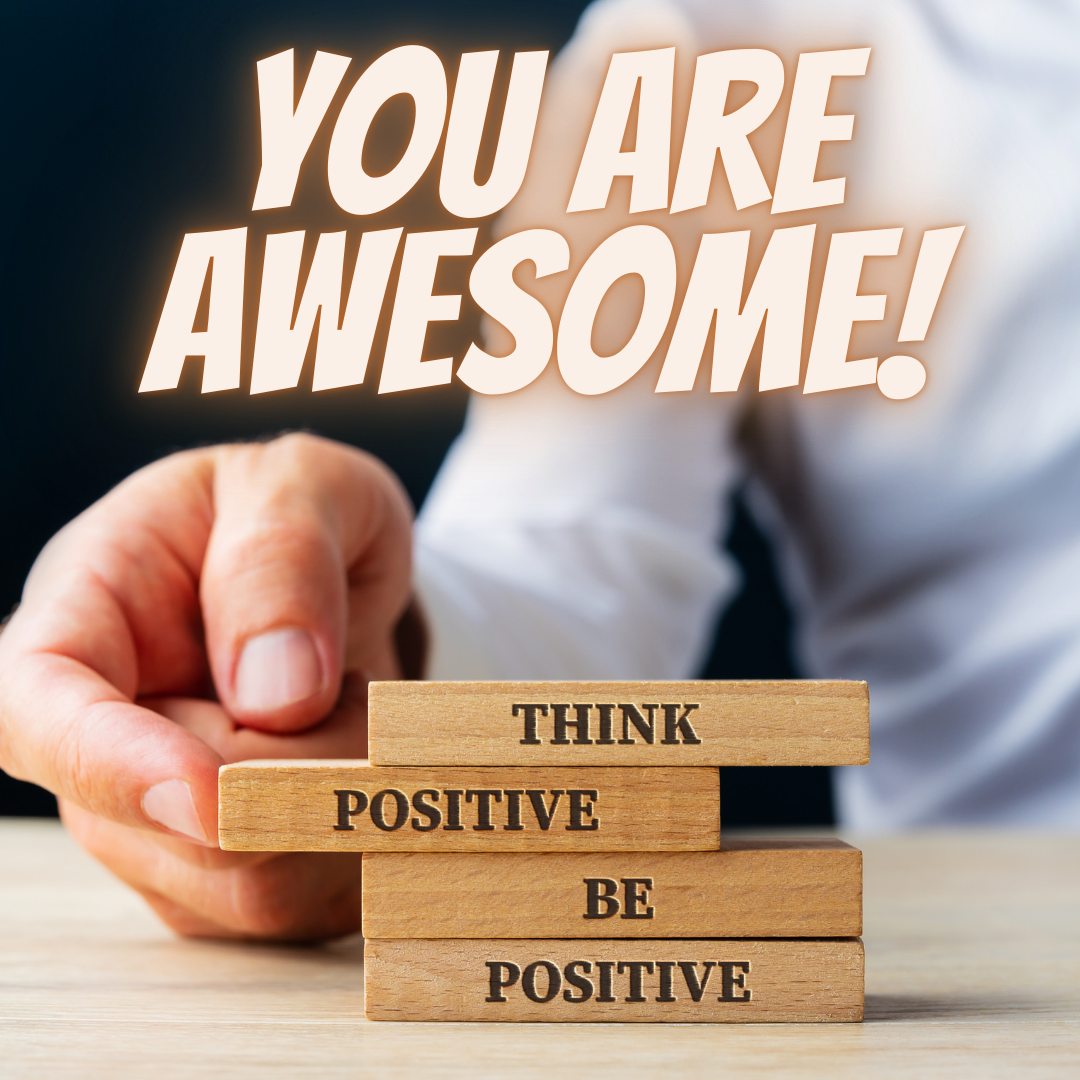 All this app,I only use leo finance frequently but I do touch some other app,but don't pay much attention to them as I pay to leo finance.