The second layer Hive Engine keeps ticking along with more and more apps build on it. Splinterlands is the main one that drives most of the volume but there are a lot of other apps and tribes. Since recently we have seen some NFTs apps build on as well. 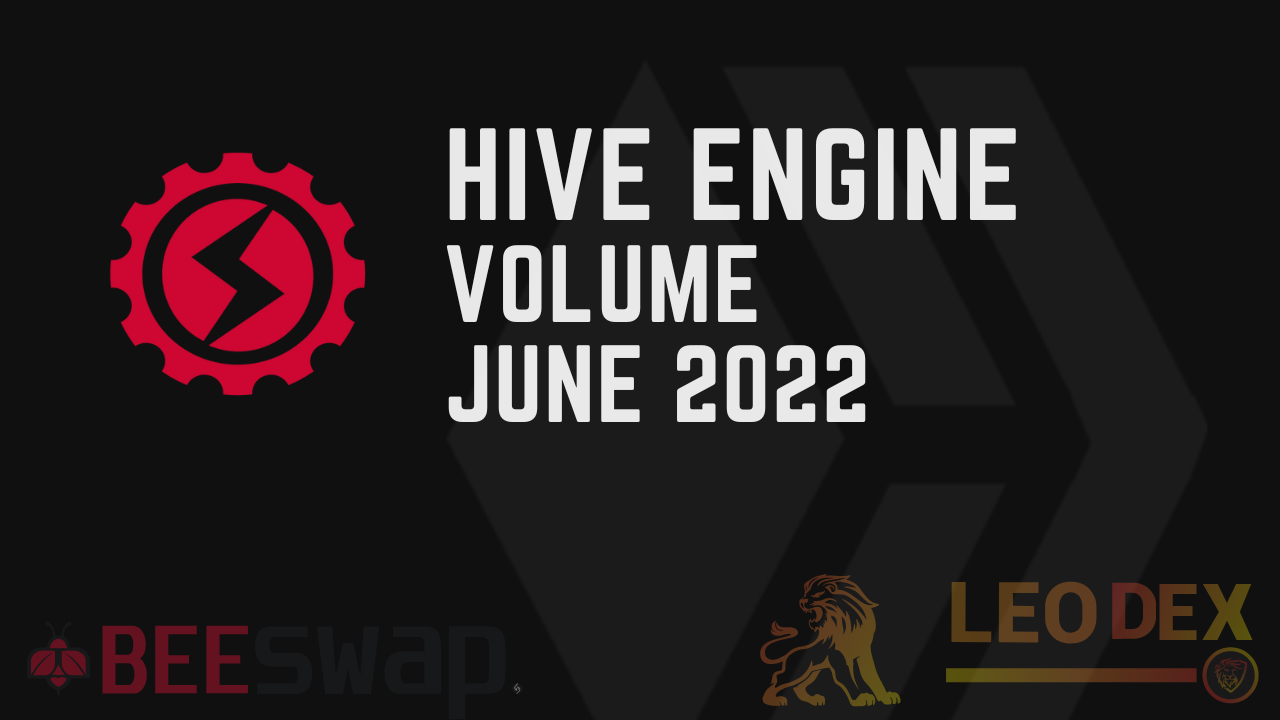 Here we will be looking at the volume that Hive Engine does in terms of deposits and withdrawals on the platform. It is a nice indicator of the state of the platform.

At the moment there are three major gateways for deposits and withdrawals on Hive Engine:

The fee for deposits and withdrawals was recently reduced from 1%% to 0.75% on Hive Engine while they remains 0.25% on BeeSwap and LeoDex.

For deposits we will be looking at the transfers to the Hive Engine @honey-swap account, @leodex and @hiveswap for BeeSwap. 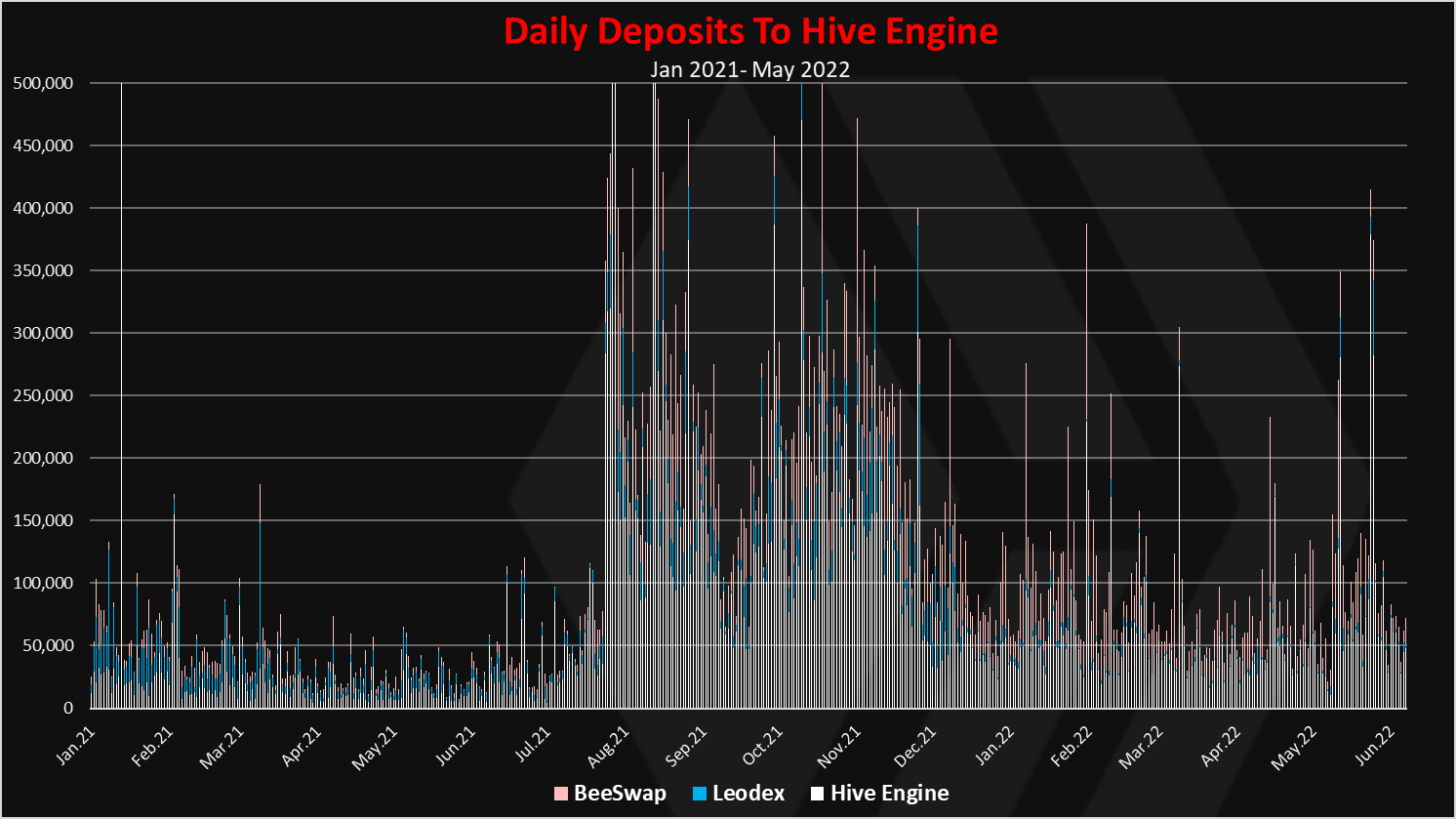 The daily chart is a bit messy with a lot of spikes and ups and downs.
Prior to August 2021, the deposits were under 50k per day. Then in August they spiked a lot reaching more then 500k a day. Since then, the volume has been much higher. In the last month the average is around 110k per day. 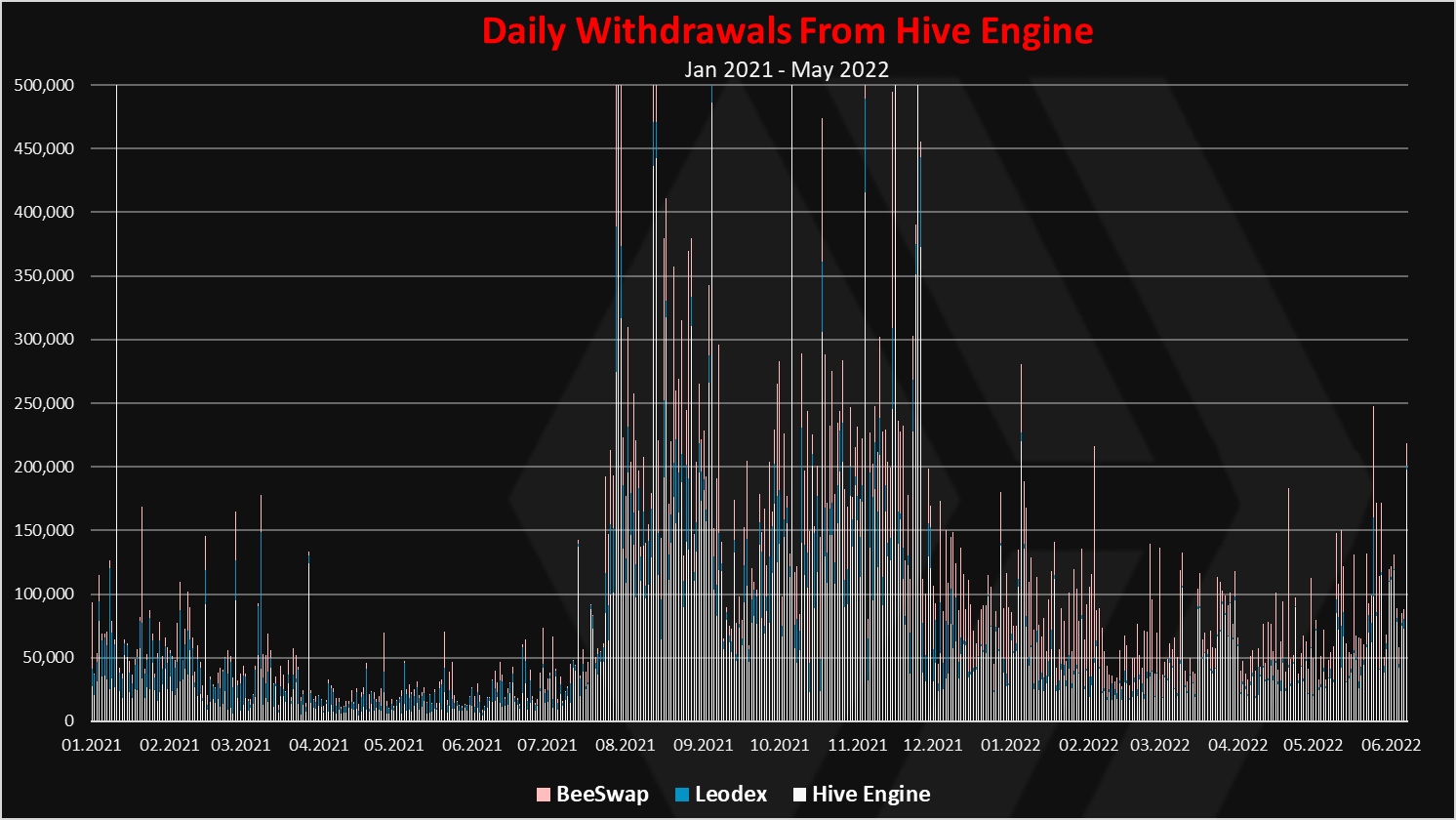 This chart seems to be following the deposits, just with smaller intensity.

If we take both the deposits and withdrawals and sum them up on a monthly level we get this. 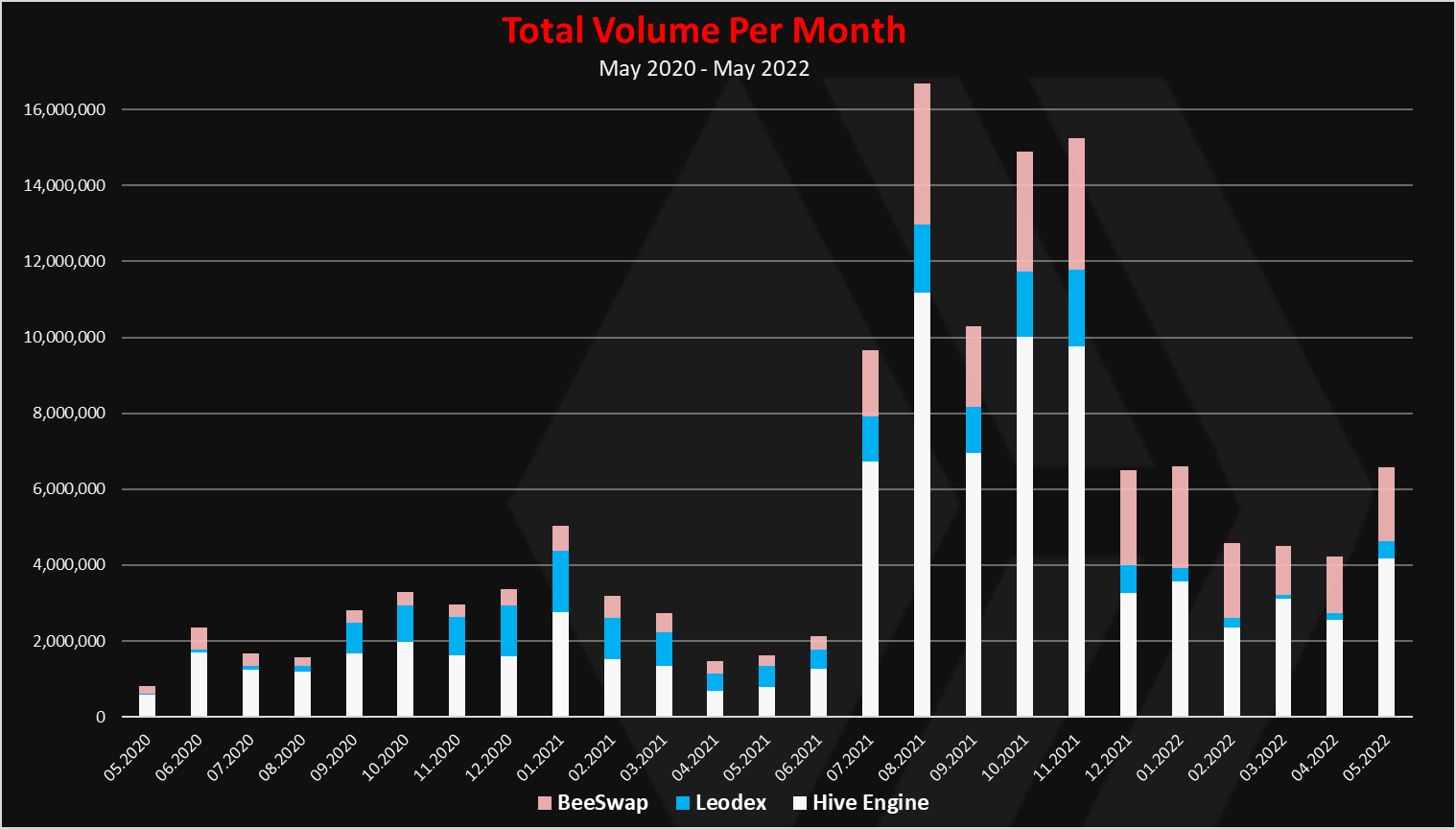 This is a bit clearer representation.

We can see the growth starting from July and then a peak in August 2021, with more then 16M HIVE deposits and withdrawals to Hive Engine. From December 2021 the volume has dropped a bit but it still remains higher then previously. In the last month May 2022, we can notice that there has been increase in the volume.

The trend mostly follows the growth of Splinterlands.

Here is the chart for the share of the deposits of Hive Engine, LeoDex and BeeSwap for May 2022. 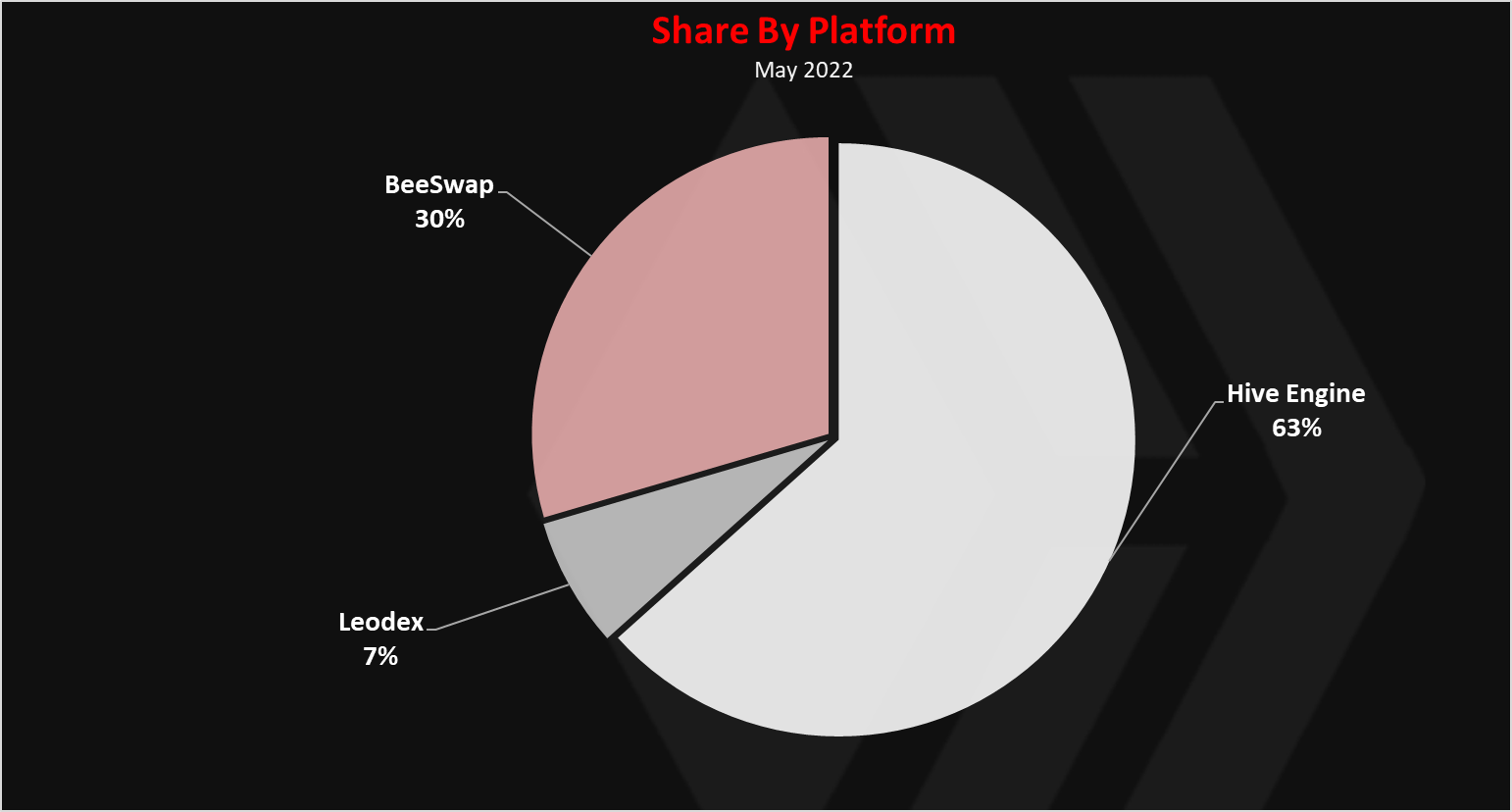 The Hive Engine account @honey-swap has 63% share of the cumulative volume (deposits and withdrawals). BeeSwap is on the second spot with 30%, followed by Leodex with 7% in the period.

Here is the chart for the HIVE stored on Hive Engine. 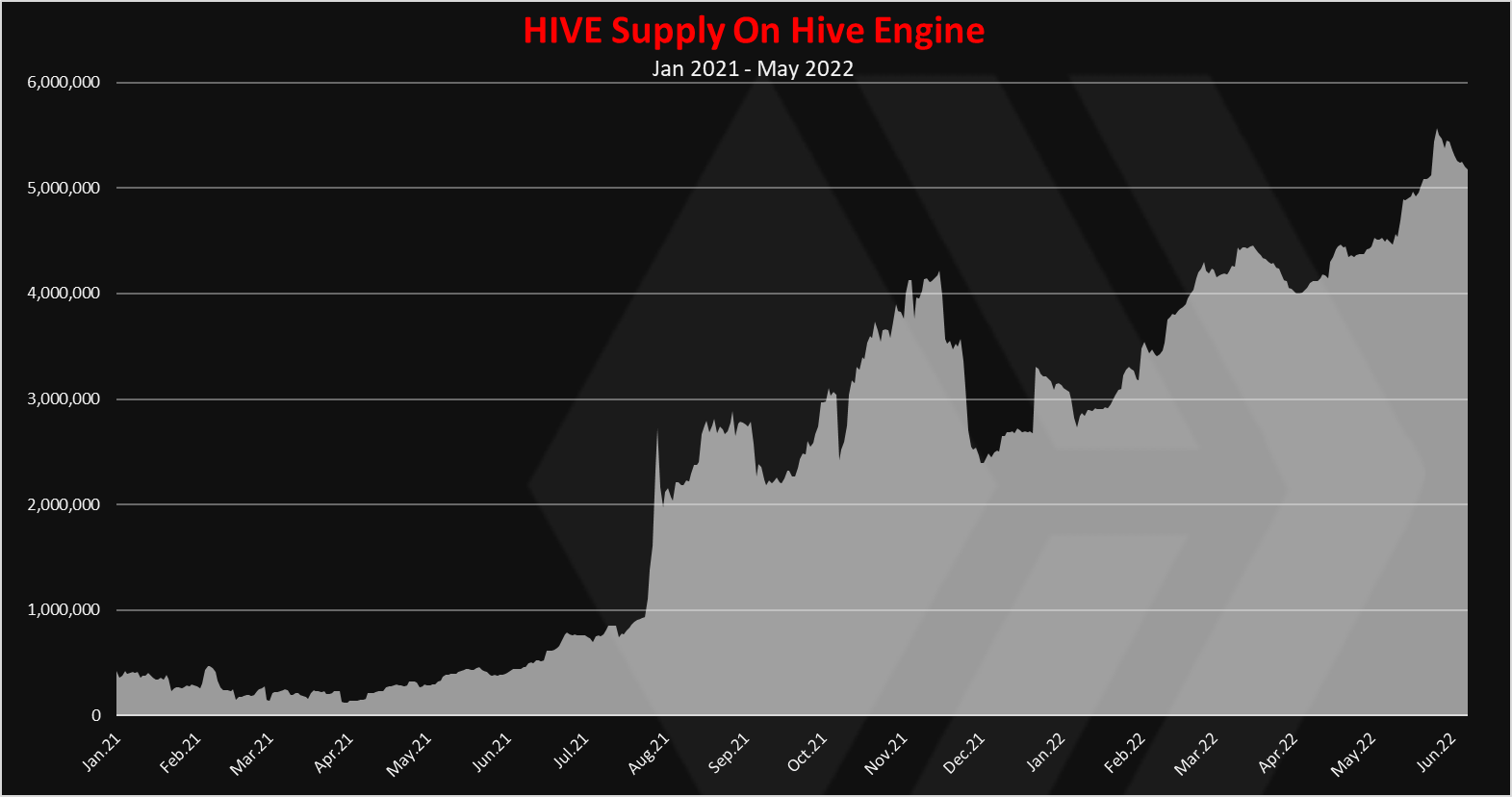 This is an interesting chart!

As we can see prior to June 2021 there was under 500k HIVE stored on Hive Engine. Then it started to pick up reaching an ATH in November with more than 4M HIVE. A drop afterwards, and a steady growth again with more the 5M now. At the moment of writing this, the @honey-swap is holding most of these tokens, while the other gateways are mostly out of liquidity.

With this growth Hive Engine is now positioning itself as one of the major source for HIVE liquidity and as a number five exchange for HIVE. Bittrex and Bithumb are now close to it, with 7M and 6M holdings. If it surpasses them soon, it will become then no.3 exchange for HIVE just after Upbit and Binance.

Here is the chart for the top accounts that deposited in the last 30 days. 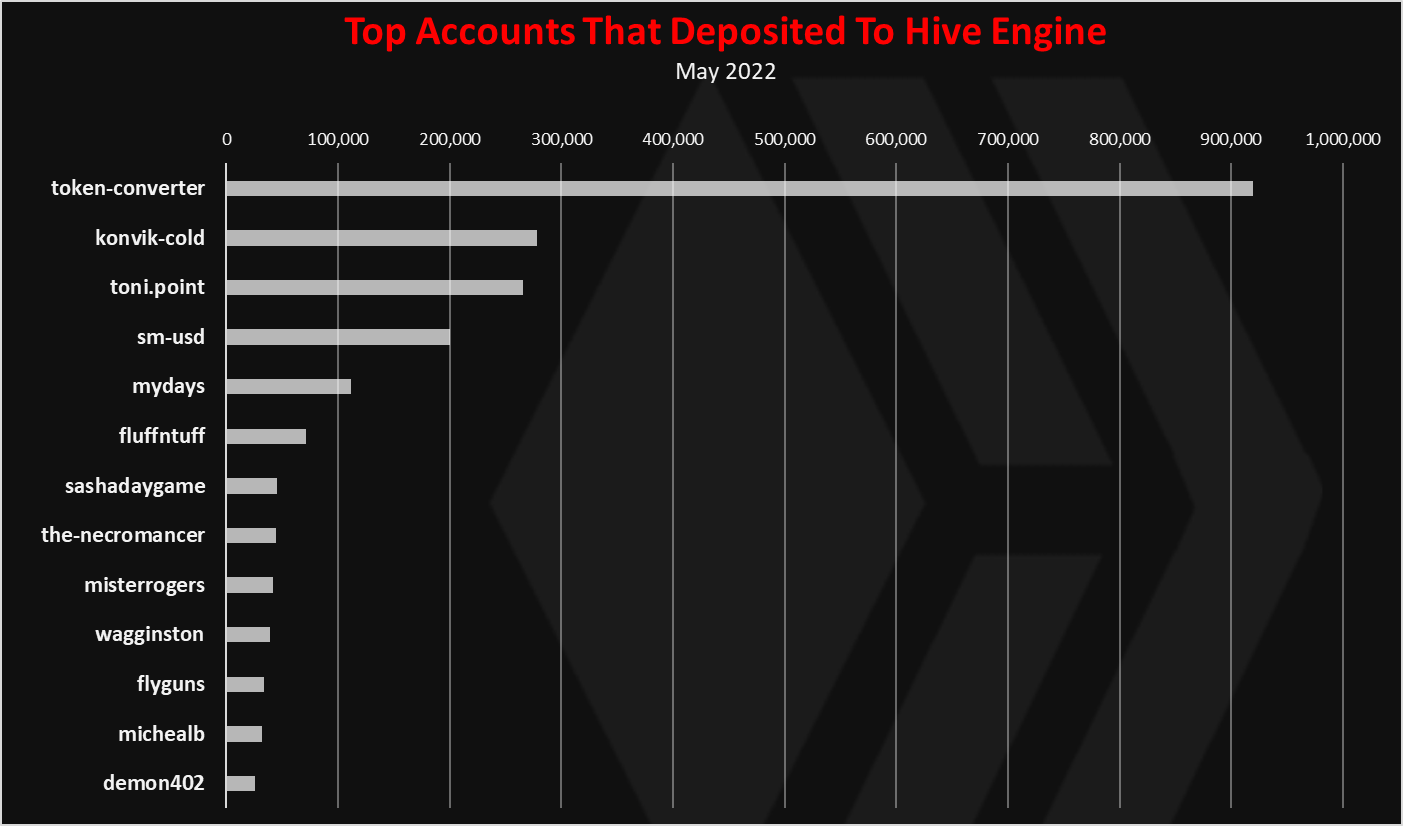 The @token-converter account is on the top with more then 900k HIVE deposited in the period. This is an account that is connected with Splinterlands and their inner workings.
The @konvik-cold is next, although I’m not sure what exactly this accounts represents.
@toni.point on the third spot, taking care of arbitrage 😊.

Here is the chart for the top accounts that withdrew in the period. 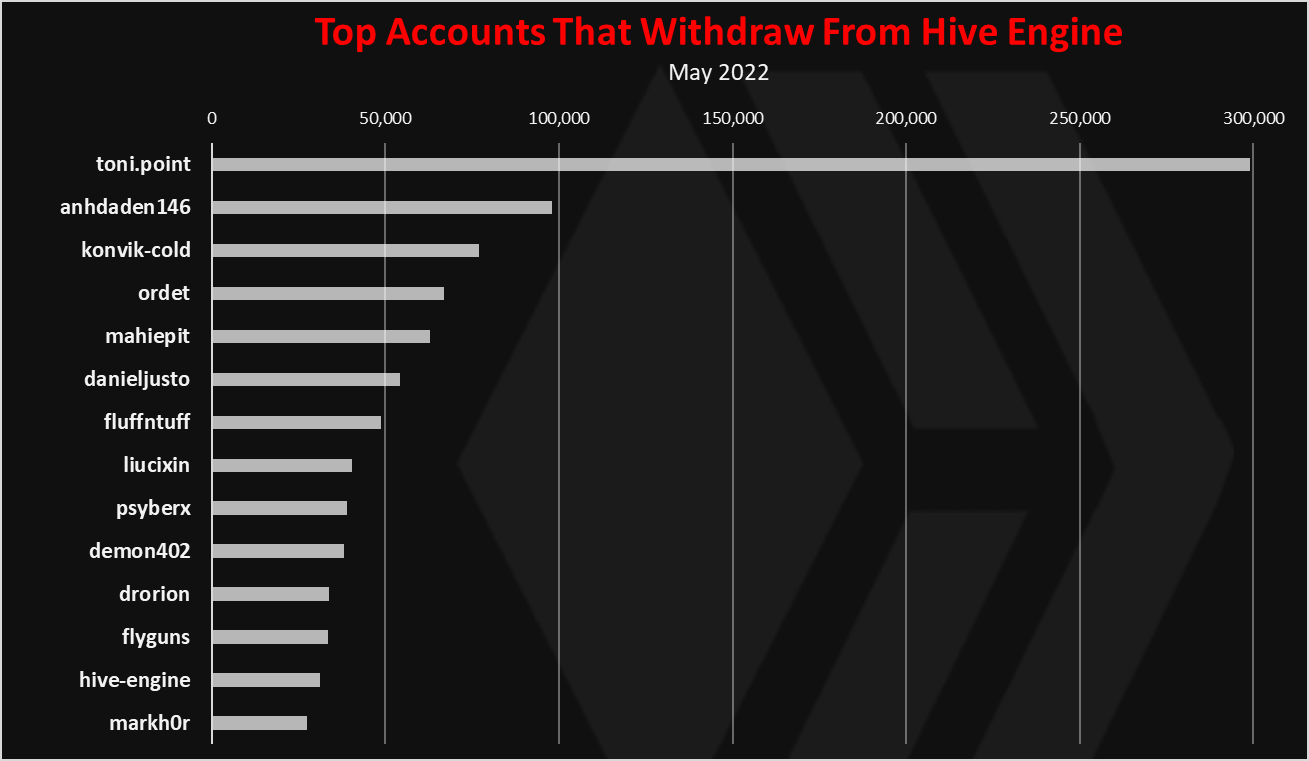 @toni.point is on the top with more than 300k HIVE withdrawn in the period, making arbitrages.

What about HBD? HBD has been growing in adoption recently. How is the volume for HBD?
Here is the monthly chart. 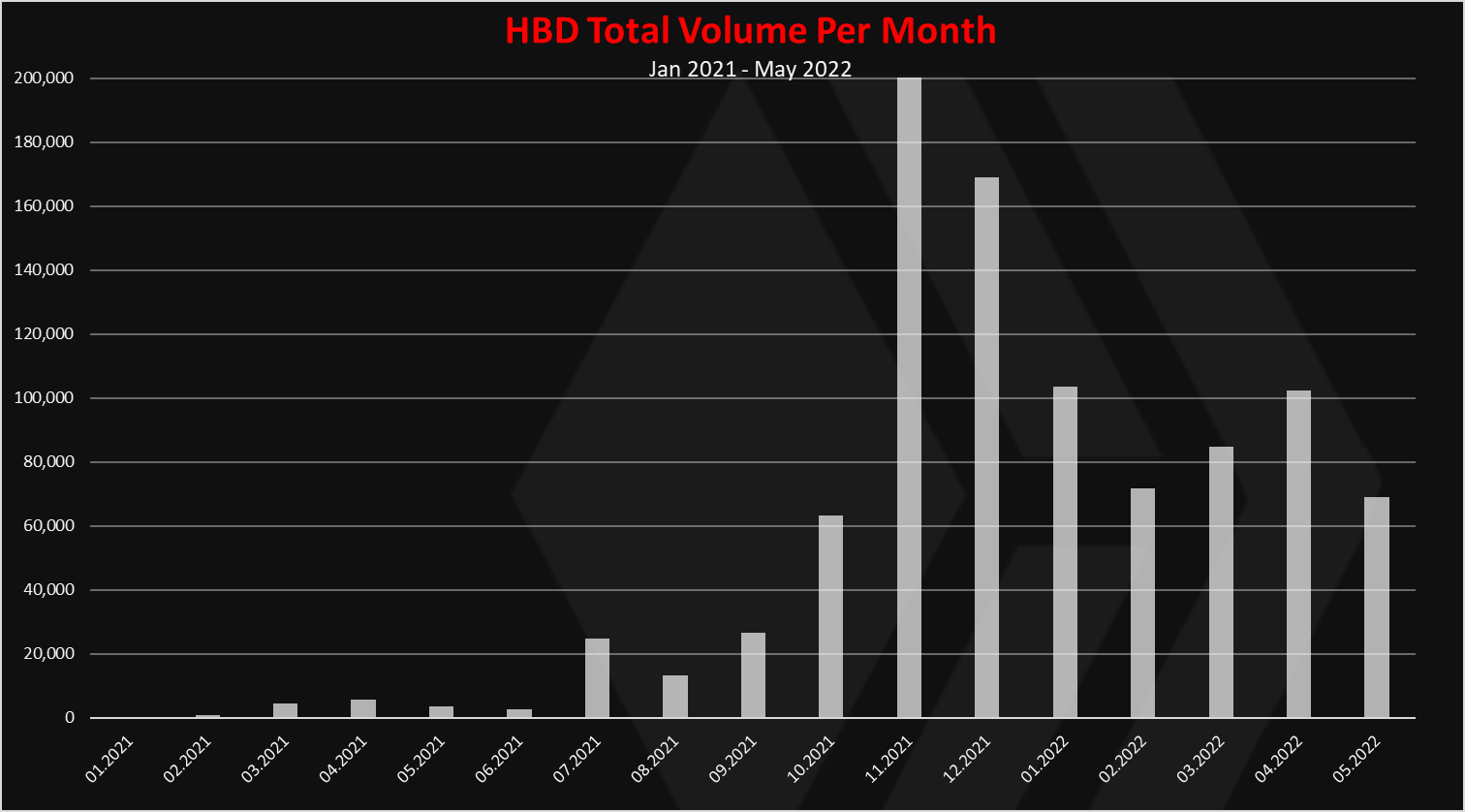 As we can see the HBD transactions to and from Hive Engine have been growing and reached more then 200k HBD in November 2021. A downtrend afterwards to around 60k to 80k volume per month.
There are few HBD pairs on Hive Engine with a decent liquidity like the HIVE:HBD, BEE:HBD and HBD:BUSD.

This is the one I've been using of late, its fees are more reasonable.

Interesting!
Who is running this one?

I think its mostly @theguruasia .

Thank you for mentioning here!
$WINE

@dalz,
I am the person who is behind @hiveupme discounted bridge with a 0.1% (Max) fee structure. It seems like people pay a big fee while using @honey-swap, but they got the lowest fee, trusted 3rd party bridges out there.
Thank you for developing this report & looking forward to more details on 6 bridges currently working on HIVE <=> SWAP.HIVE.
"hiveswap", "cropswap", "hiveupme", "hivepayswap", "leodex", "honey-swap"

Cheers ... will include those ones going forward.

Another Ath in holdings is good for the growth of Hive. 900k deposited is some volume !

Yep, ever since Splinterlands took of :)

Hive-Engine and the 2nd layer token market has kept Hive fun and relevant. Frankly if you want to move any decent amount around, Hive Engine is usually the only dex with any liquidity, so you just pay the fees and move on!

The possibility to build on the chain is extremely important.
Hive Engine did this with almost zero tools from the L1. The easier we make it for others to build the better.

About the fees yea ... seems like every time some liquidity shows up on these cheaper options bots scoops them up

Hive engine does some seriously decent numbers. It's why I wish LeoDex got a little more love. There's huge value and fee collecting that can go on there to support the LEO token and development and feels like a very missed opportunity right now.

I think leodex is mostly abandoned at this point.Only has 7k of total liquidity compared to beeswaps 220k. Chances of leodex having enough for swaps are so low that nobody uses it.

I guess some users were having issues with Liquidity lately.

It would be interesting to see a total valuation for all the various assets that are listed on Hive Engine (TVL would be value of all supported assets, not just the locked HIVE)

Hard metric to get to though, since there are so many NFTs now and there is rampant price manipulation among smaller HE tokens. Could feasibly measure TVL for Top 100 by HIVE trading volume and it would be accurate enough to capture trends over time.

Yea thats interesting.... I thing the main challenge will to separate Splinterlands assets, since those are like almost native to the system, for example there might be DEC valued in 10M.

If you remove Splinterlands, then you can just go for BTC,ETH, LTC, and few others, and HIVE and you will have some rough number.

I think that native assets should be included, as they're part of the value that is circulating on Hive-Engine. What should be excluded is all the weird low float low volume tokens that don't have enough interest for meaningful price discovery.

I believe hive-engine have been a useful tool for most individuals in the blockchain which is pretty awesome to use.

Thanks for the wonderful analysis of hive!

If only the LEO Dex focused on sourcing liquidity and then paid out a portion of fees back to LEO holders.

That will be cool :)

I like that you can trade Hive against Bitcoin and Ethereum on Hive-Engine too - the spreads are not bad, which suggests someone is acting as marketmaker.

Beeswap kicking strong and BXT trading at a $70k market cap... Seems to me it is shopping time.

I love the Hive Engine. It would be great if HE would improve the deposit/withdrawal from external wallets. Liquidity is also too low.

Congratulations @dalz! You have completed the following achievement on the Hive blockchain and have been rewarded with new badge(s):

I love numbers and stats and find these fascinating. Having only been an active member of Hive since Jan 2022, I can't comment pre 2022.
It is interesting things are following Splinterlands, it just shows the importance of a NFT game within a blockchain!
It would be good to see LeoDex getting a bigger slice of the pie, but I am guessing that is to do with liquidity issues.
Thanks for putting this together, have bookmarked it and will be looking at in greater detail!

Isn't it just down to people pooling Hive with DEC for the SPS drop? At least most of it?

I'm expecting an ickle Hive Dump when the drop ends.

Maybe, but this has been available for a long time now, and it has grown recently

Oh OK that is interesting, I am a fan of some of the pools, but we are talking quite small amounts, still, nice returns nonetheless!

Overall, no doubt that Spliterlands is thr main driver behind it... in one form or another