This is a report for the top Hive earners by category for April 2022. 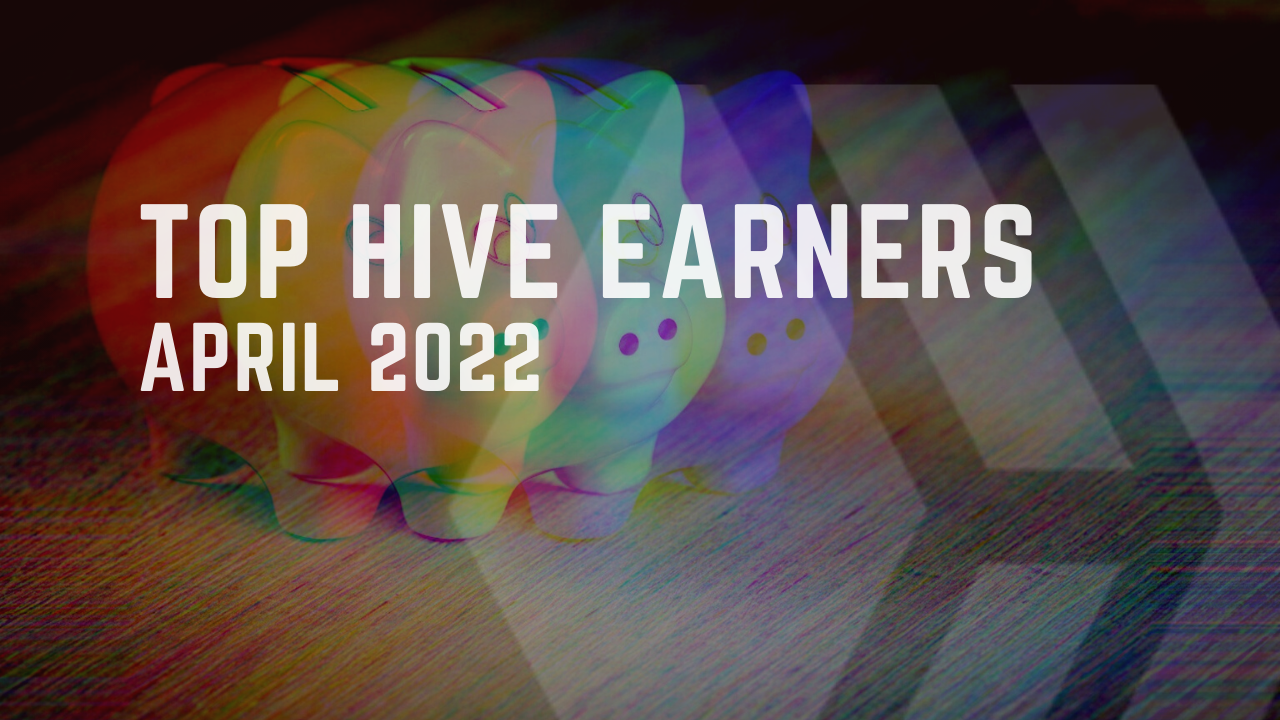 Here is the chart for the top 20 Hive authors that earned the most in the month. 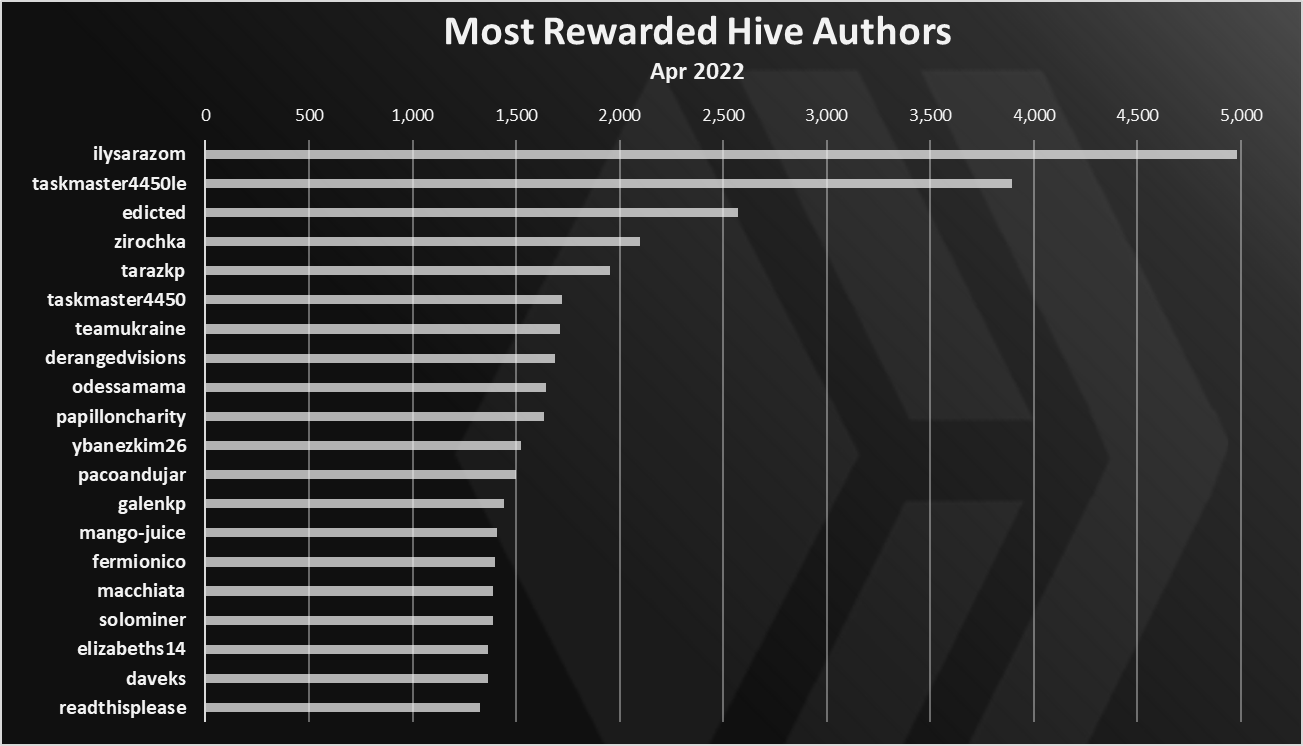 Note: These are not totally accurate numbers because there is a conversion on VESTS to HIVE, for simplification. Also some of the top beneficiaries like the hbdstabilizator, reward.app and 3speak are excluded.

Author rewards are one of the most know in the blockchain as a lot of users are attract for them.
@ilysarazom is on the top followed by @taskmaster4450le and @edicted.

A new name on the top!

There is more than 10k authors that have received rewards in April 2022. The average authors reward is around 72 HIVE for authors that earned at least one HIVE in the month. 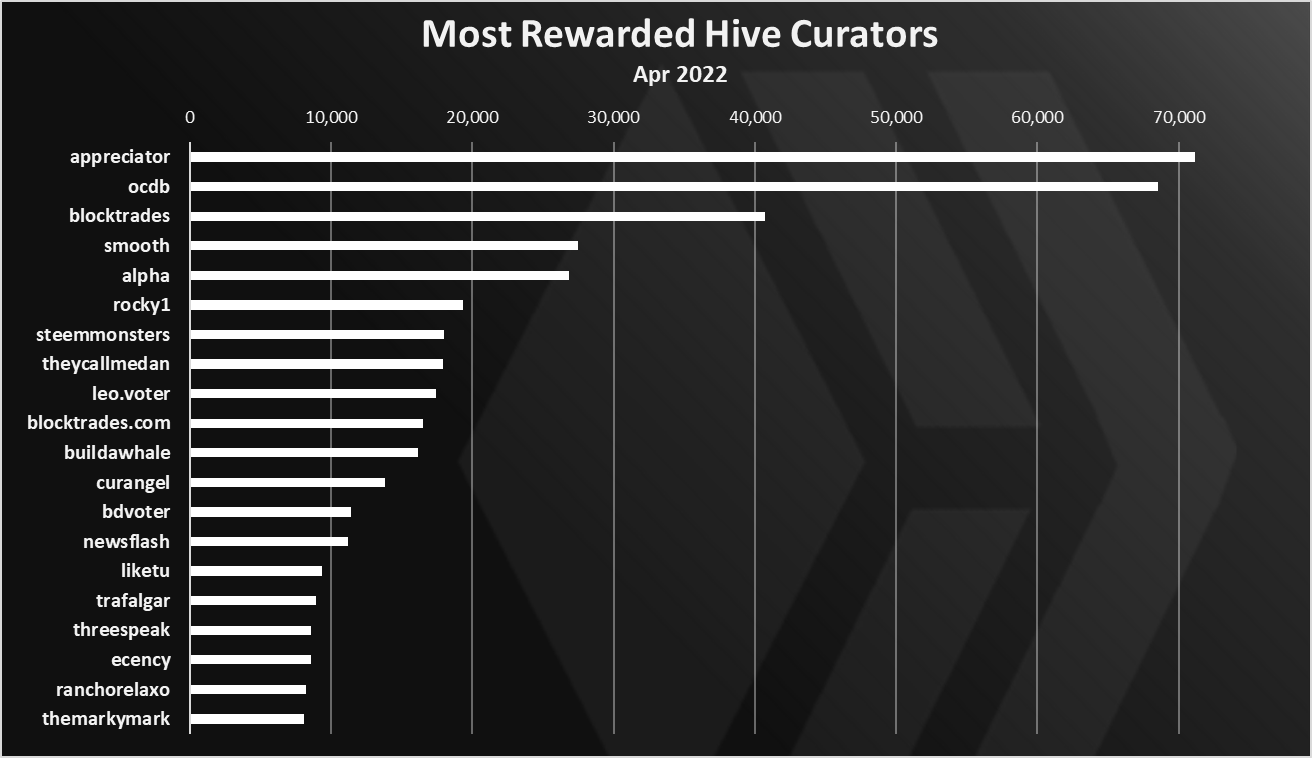 @appreciator is on the top here, followed by @ocdb and @blocktrades. 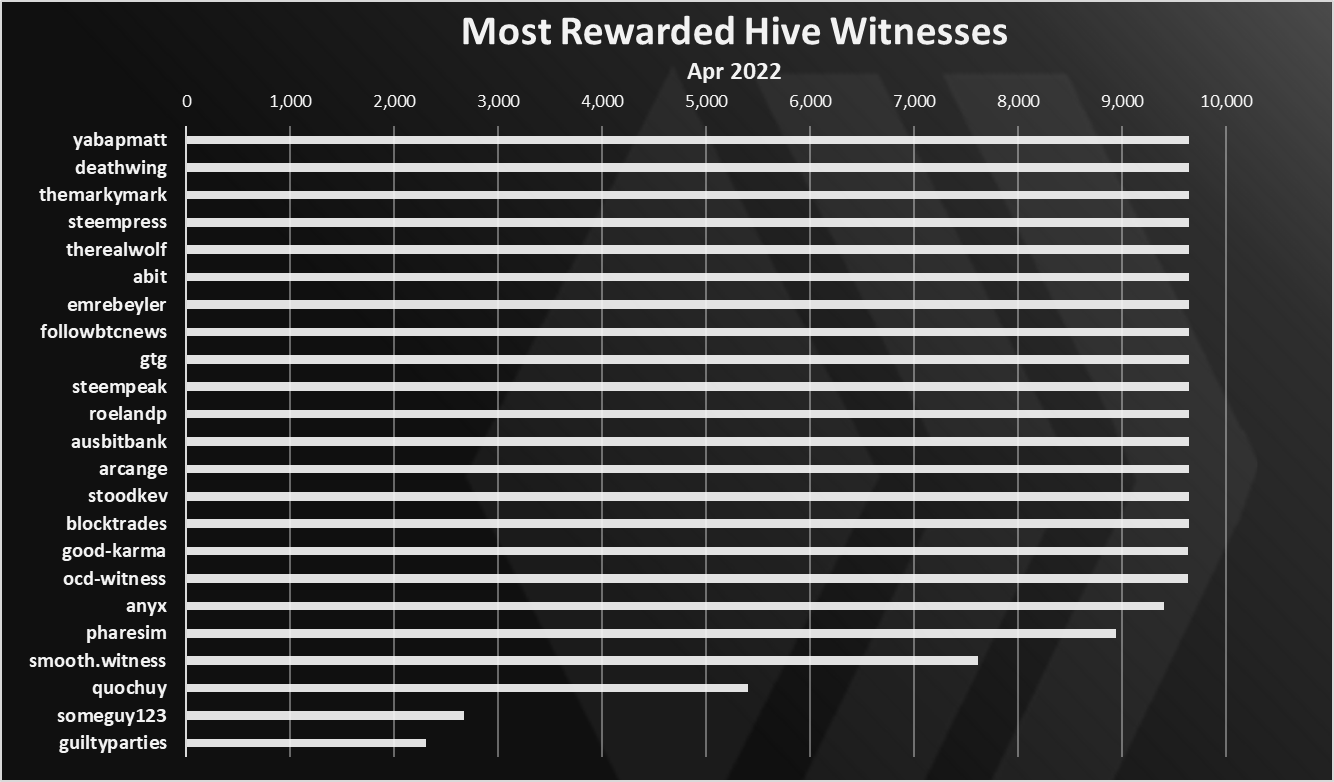 There seems to be a healthy competition among witness now, especially around the 20th spot.

Accounts that received funding from the DHF/DAO in the period. 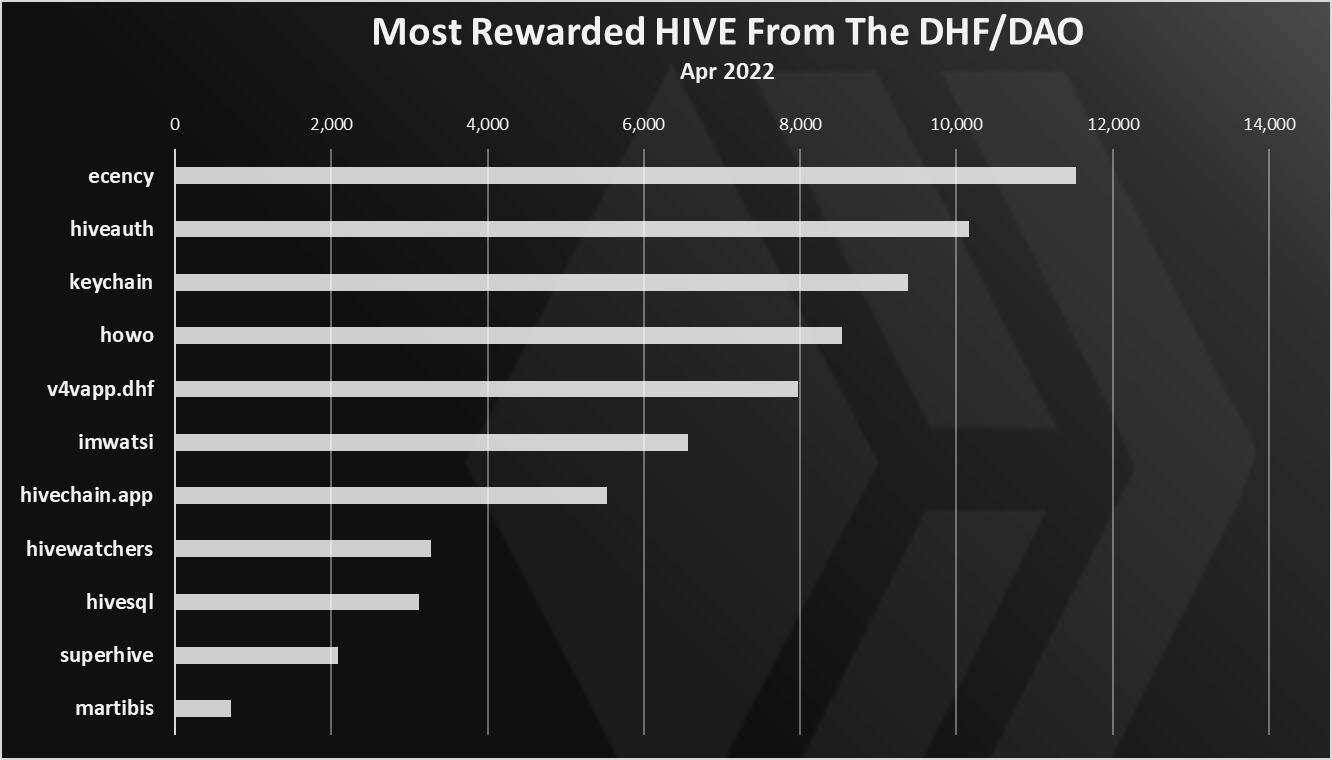 @ecency is on the top here followed by @hiveauth and @keychain.

Note on the special @hbdstabilizer. I have excluded this account from the here, since it is dominant on the top, with 4.5M HBD received in April 2022, but since technically its not keeping those funds, it is excluded from the list.

From the data above we can compile the payout for a single ranking on overall top earners on the Hive blockchain in April 2022. 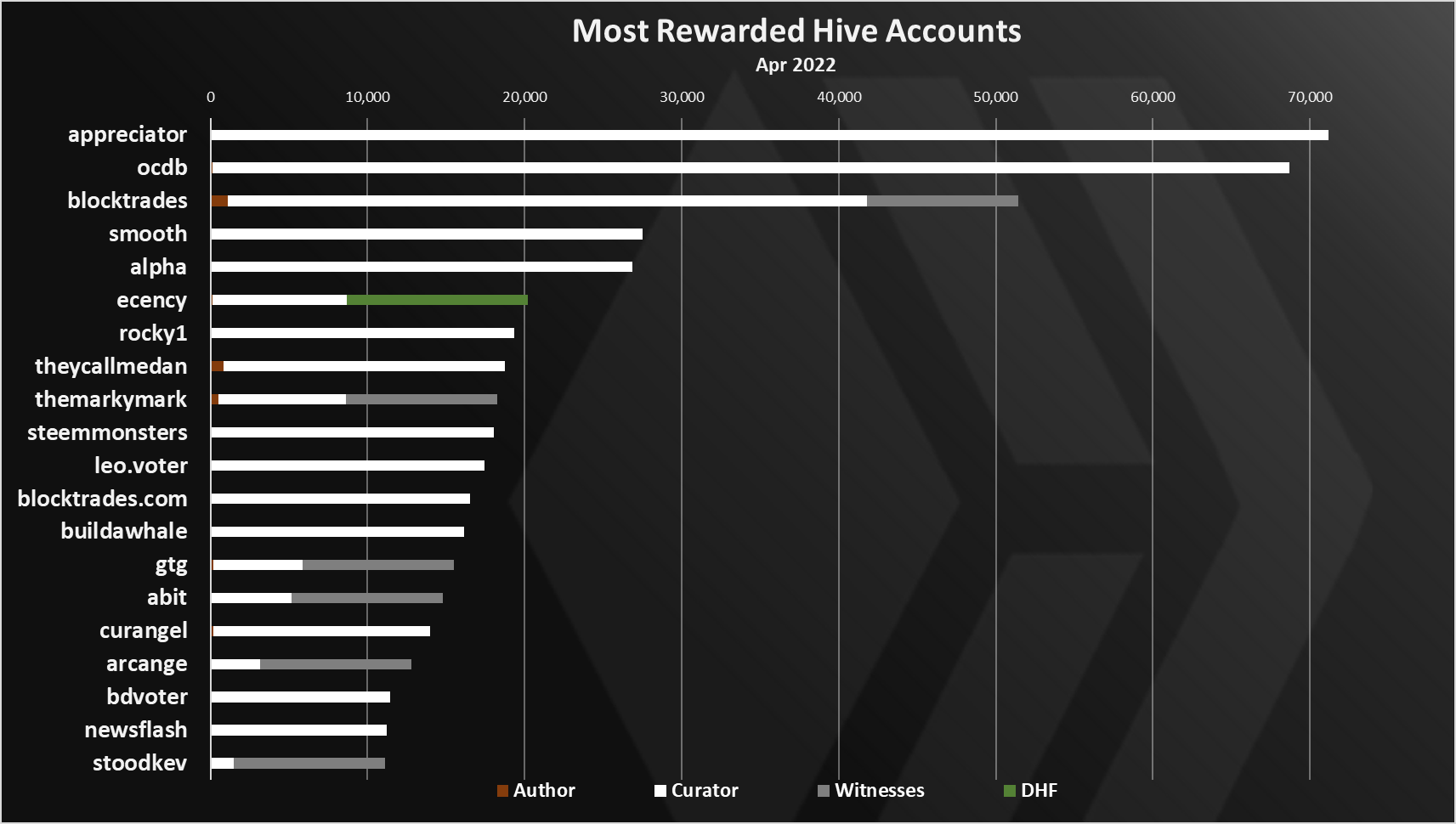 @appreciator comes on the top with as a curation accounts then comes @ocdb and @blocktrades.

The curation and witness’s rewards category are dominating in the top 20 HIVE earners list.

Lovely work done as always. Thanks for sharing.

Wait, what?
So we have @taskmaster4450 being replaced as the most rewarded Hive author? Just wow.

Yep, that happened as well :)

Now I understand how that happened. For me @taskmaster4450 is still on top...technically ;)

Interesting read for sure, some good earnings for those at the top!

I feel like such a baby seeing those stats😁 got here through listenerds btw great overview.

Crazy amounts of HIVE being paid out here, it really is inspiring to see and I hope that one day I will crawl somehow on that board. Big effort needed though and a lot of time.
!PGM

Tell all of them to watch their backs, I'm coming for them 🥲

I can't help but wonder if I'll ever find myself in this list🤔. This looks like a whole lot.

Because is circle jerk😄😄

I think that is quite precise! ;-)

some of these accounts are just crazy in terms of the amount they are getting paid for what they do. Oh well I guess

the master of tasks is killing the Hive farming ... I mean earning game with two accounts :P

One and only ... well deserved

@mango-juice you should see this, making us proud in the city, aay aay!

This comes to show that creators are really and unfortunately not making any money on the community????? A blockchain that was created with the goal of being a social blockchain and in the end it is really not social at all!

Creators earn 32.5% of the inflation ... its just split between more accounts then the other categories

A very small percentage for a "community" that is supposed to be to create content, and that % is also divided in very very little amounts. That's why I've said that this numbers really show that actually HIVE is not really very content creator friendly.

how do appreciator and ocdb work? I've always wondered about that.

They curate as they see fit :)
Ask in their discords

It's crazy to see this rich list one can dream,right?

This is interesting. It's good to see the top accounts !

Amazing! They are absolutely rocking it!

@gangstalking -18
2 months ago
Whoever is directly controlling the V2K told me to kill myself.
They told me if I killed myself now it would save the lives of countless others.
Saying the longer I wait to kill myself the more people will suffer.
They are reckless and should have shown the proper media what they had before taking me hostage for 5 years. I know there are many in prison that dont deserve to be there because of this. Your stay in prison will not be fun @battleaxe and friends. People are going to want you dead when they find out what you did. I hope you die a slow painful death. You sick mother fuckers.

Its a terrorist act on American soil while some say its not real or Im a mental case. Many know its real. This is an ignored detrimental to humanity domestic and foreign threat. Ask informed soldiers in the American military what their oath is and tell them about the day you asked me why. Nobody has I guess. Maybe someone told ill informed soldiers they cant protect America from military leaders in control with ill intent. How do we protect locked up soldiers from telling the truth?
0
0
0.000
Reply

Wow, there is a lot of Hive being earned out there. It has taken me almost 2 years to approach 5000 Hive and there are individuals who do that much in a month. I have a lot to earn.

Also some of the top beneficiaries like the hbdstabilizator, reward.app and 3speak are excluded.

Can we get the numbers on these?
I understand leaving them from the chart if they are so large that they distort it.

There is more than 10k authors that have received rewards in April 2022. The average authors reward is around 72 HIVE for authors that earned at least one HIVE in the month.

Is there a way to track how much of that is getting dumped vs powered up?

Sincerely, these guys are rocking it. Cheers to all of them. 🥂

Hi @dalz, I read in a post a few days ago that Hive has given out $18 million to content creators since its inception. I don't remember if it was you do you know where I get the post?

The statistics are very interesting. In fact it's quite useful !

intresting to know the figures and the levels, thank you.

How do you mean?

you can delegate to some of them and get returns.

Ah yea ... they are around the same APR I think, OCD and curangel are some reputable

Hey do you reckon you could dig down to find what Witnesses 21-40 earn, I'd be interested to see how quickly it tails off after @derangedvisions.

It's frustrating that a few of those witnesses just use Hive as a cash cow, a few have less Hive power than me. They really should be booted down IMO.

I have the data, will post it once I'm home on the comp :)

Cheers - better than I thought for the top 50 TBH!