Wrapping HBD to pHBD | Data On Transfers and Top Accounts

Leofinance has launched a pHBD-USDC pool on Polycub with some nice APR on it. At the moment the pool has 317k liquidity in it and offers a 47% APR. Swapping fees on top of it!
All of this has made the wrapping HBD attractive, and users are doing it. A part of the wrapped HBD is kept in the savings on Hive and is generating yield in HBD that will then be used to provide APR for the pHBD-USDC pool. The goal of the Leofinance team is to make this the most liquid place to buy and sell HBD with liquidity in millions.

With this said, lets take a look at some data. 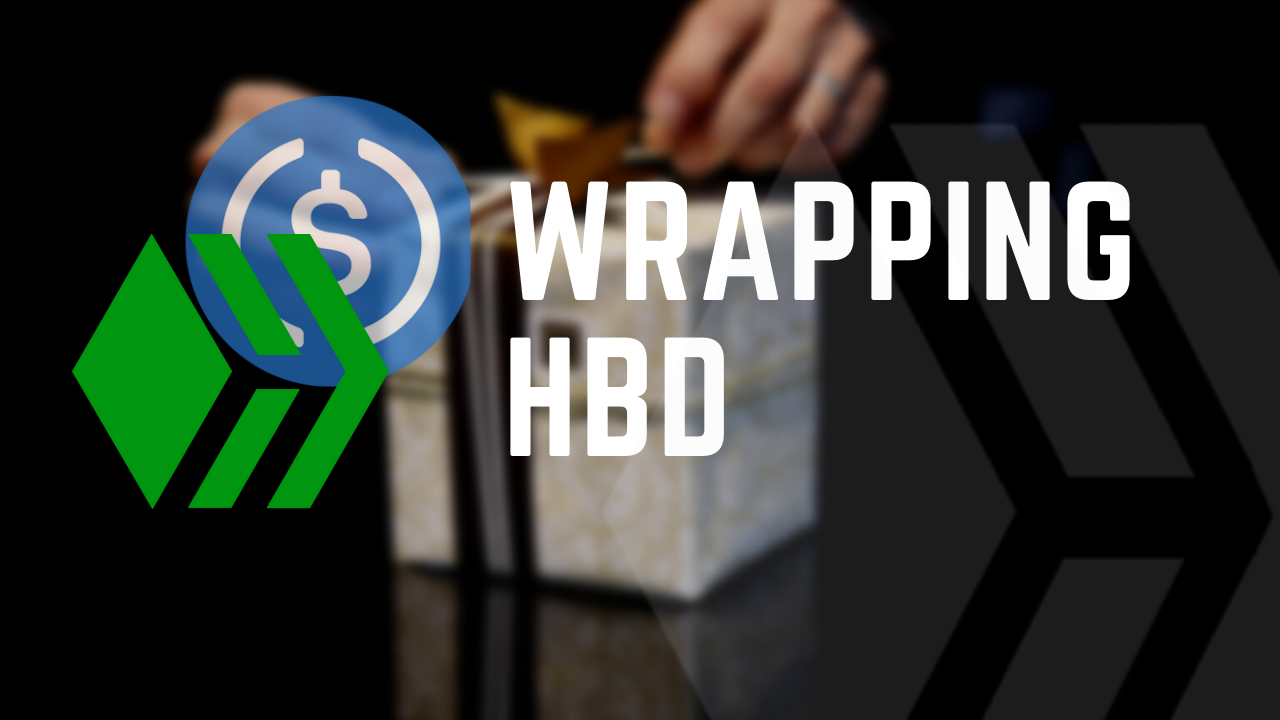 Here we will be looking at the following:

Here is the chart for the wrapped HBD on a daily basis. 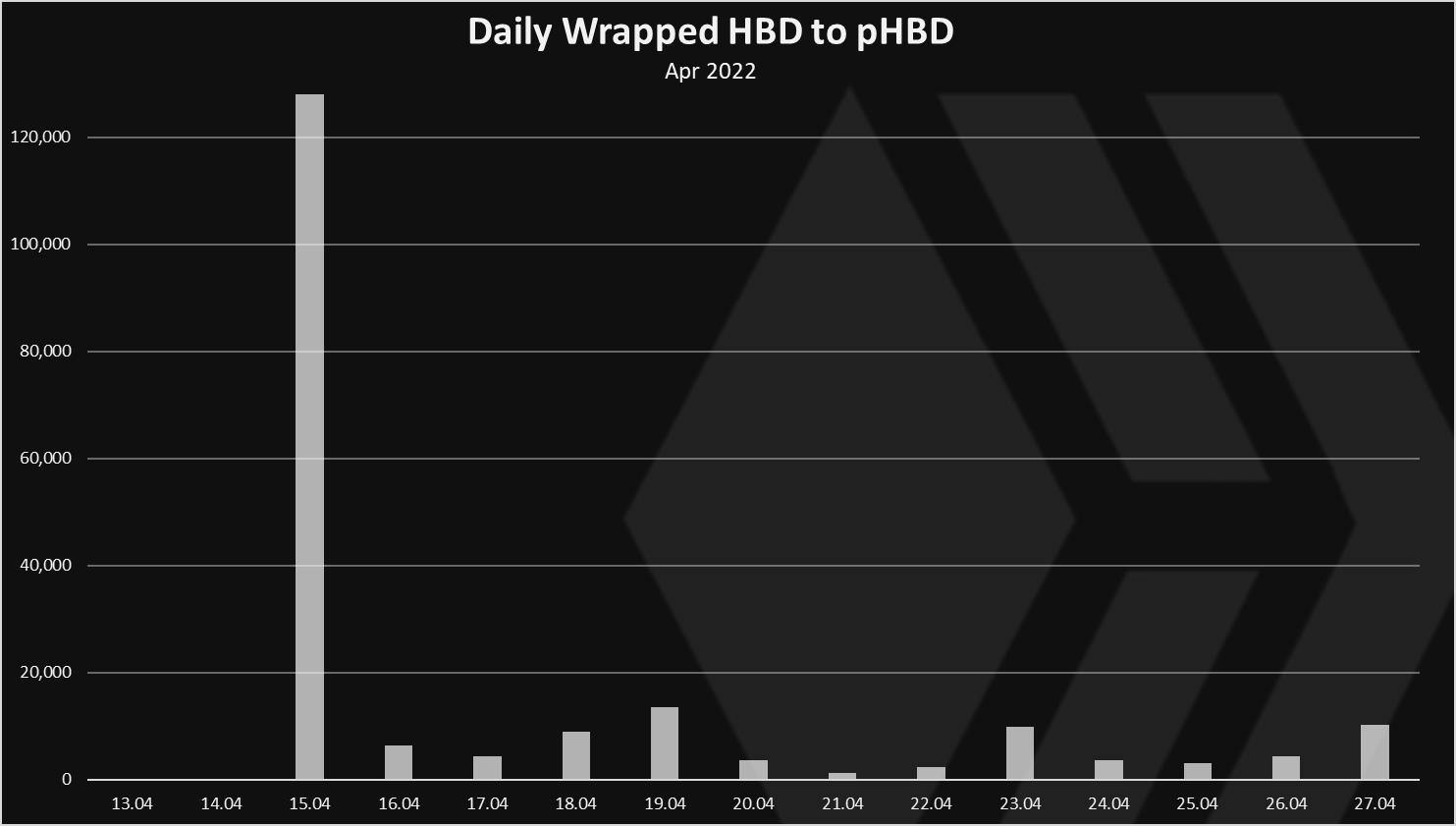 As we can see there was a lot HBD wrapped on the first day Apr 15, with a 128k HBD transferred on the polygon network. In the following days the amounts are smaller somewhere between 5k to 10k, but still there is activity.

What about unwrapping? Here is the chart. 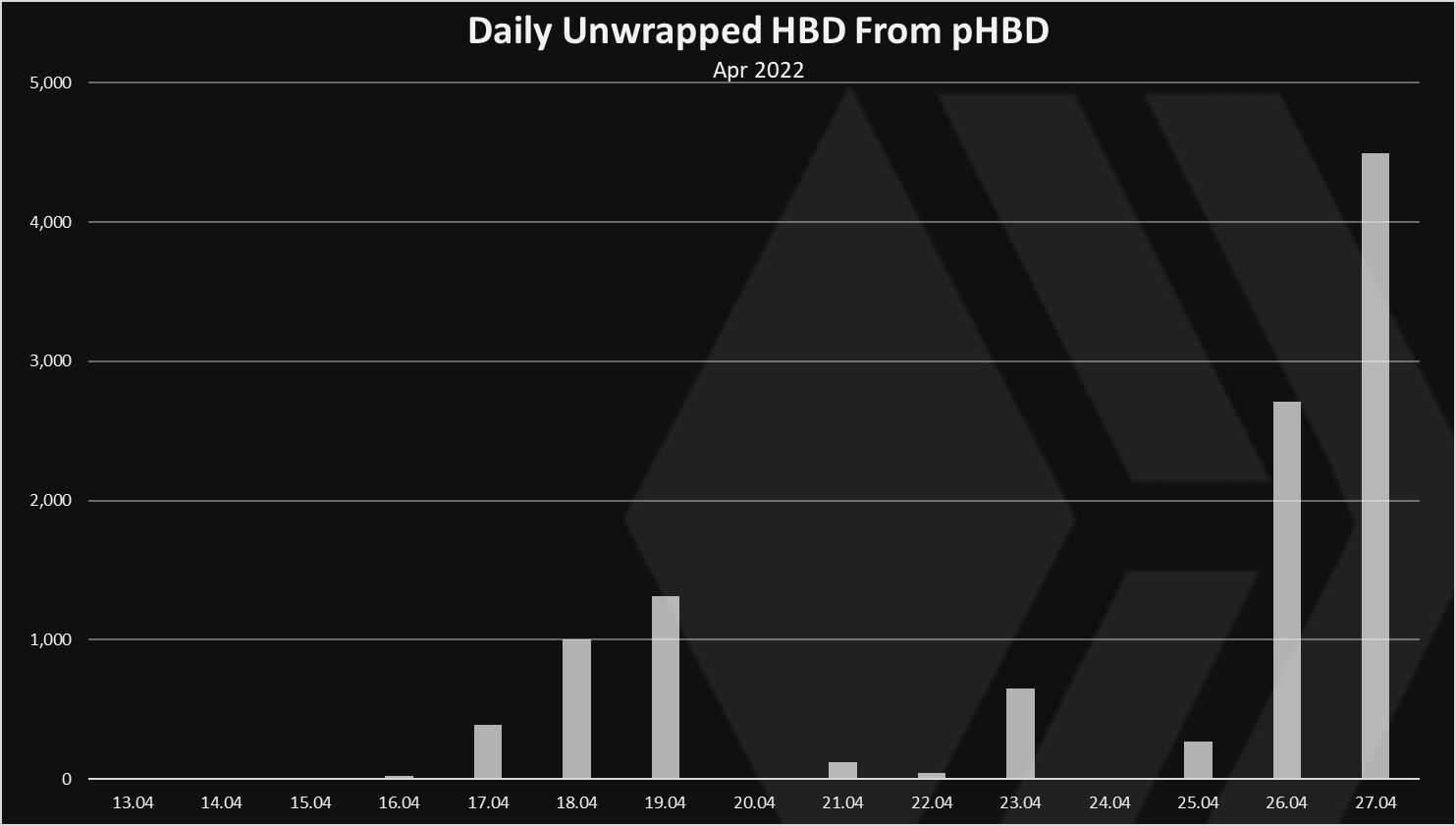 Note that unlike the wrapping where the Y axis is 130k, here the Y axis is just 5k, meaning a lot less unwrapping in the period. This is expected as the project just launched and there is demand for wrapped HBD. The last day has the most unwrapping.

Here is how the balance for wrapped HBD looks like. 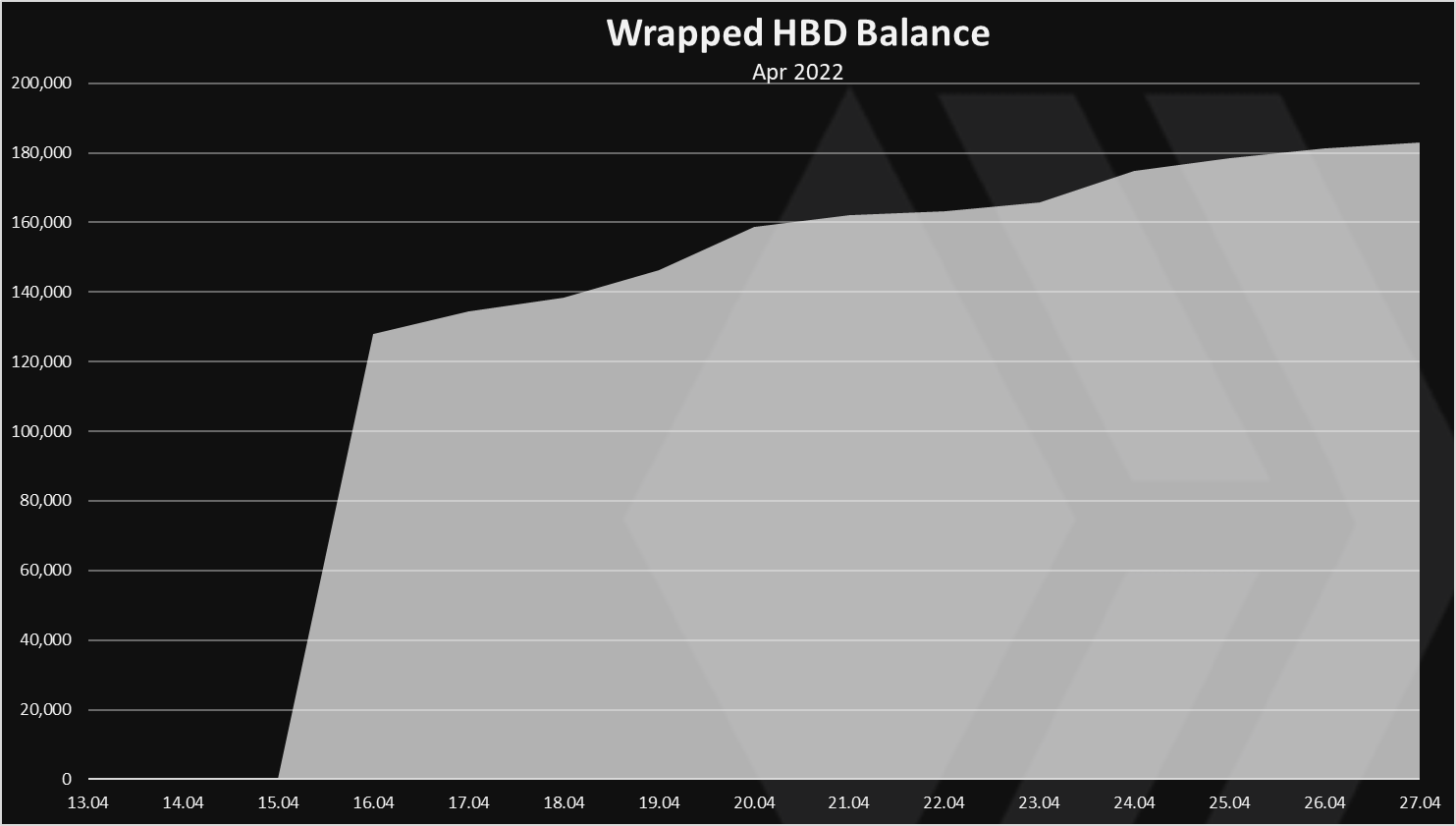 We can see the spike in the first day and then gradually growing to almost 200k HBD.
Will be interesting what amounts will be reached in a few months time. For context at the moment there is around 9M HBD in circulation, out of which 3M is in savings.

Who is wrapping HBD? 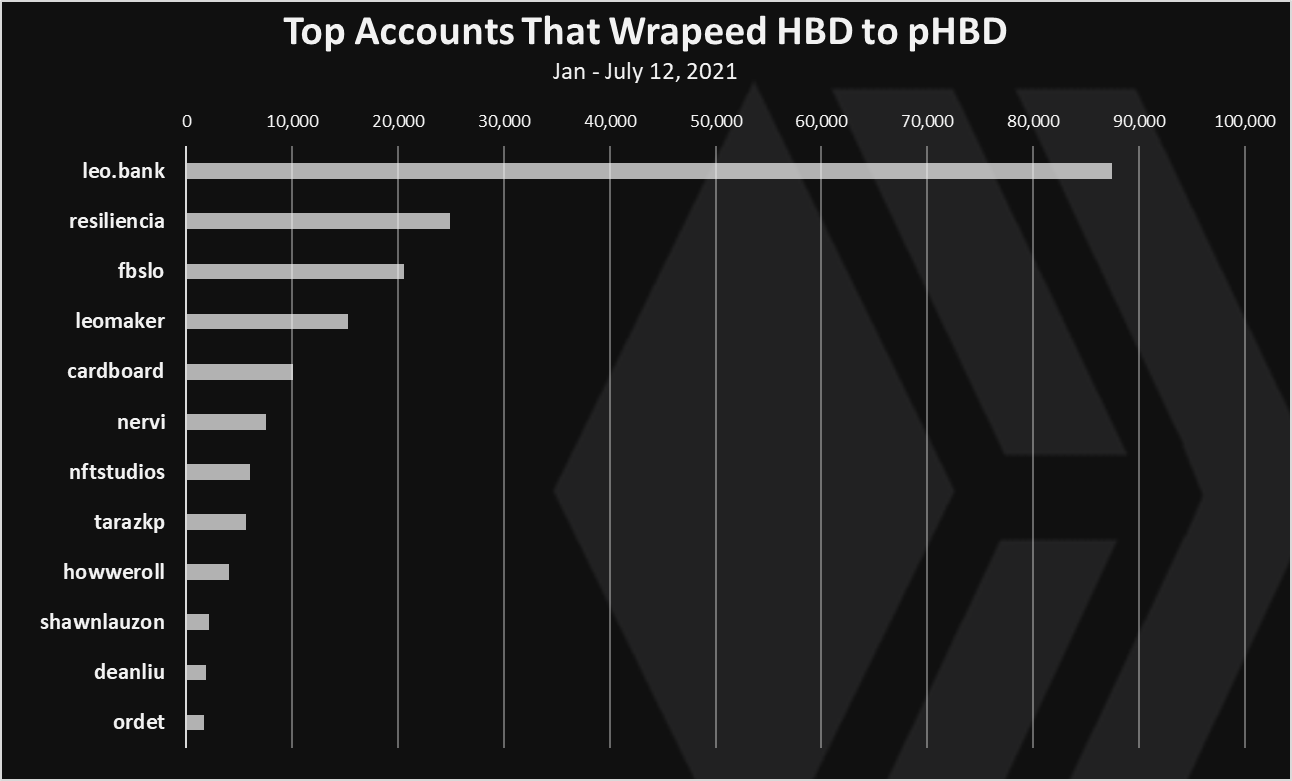 The official Leofinance account @leo.bank has done most of the wrapping wit almost 90k HBD. I guess this was needed to seed the pool initially as well. @resiliencia and @fbslo in the top as well with more than 20k HBD wrapped.

In terms of number of accounts a total of 82 accounts have wrapped HBD, while there is more then 125 token holders for pHBD, meaning some are getting pHBD directly from the pHBD-USDC pool without wrapping. I know, because I’m one of them 😊.

Overall, there seems to be a good start for pHBD and some decent amounts. Not explosive ones but still a growth. Expanding HBD will most likely be a gradual process from what are the initial reactions. All the numbers are going up but gradually. Maybe something will happen in the future but will see.
pHBD on Polygon is very convenient and it opens a whole new world for HBD and Hive in general. What is interesting to see is that most of the Hive whales haven’t jumped on board yet and maybe they prefer the safer 20% APR on Hive, then the 40% plus on Polygon. While the leofinance team has a great reputation, still not to forget that pHBD is a wrapped version of HBD and there is a level of trust in the creator. Maybe introducing some form of multisig wallets on the both sides of the HBD bridge will help in increasing the security and growing pHBD more.

They are good numbers to start with, but we have to reach more than a million liquidity in the next two months if we want it to work.

Once the pool reaches $3 million, things get interesting. Then the APR will be steady, still more attractive than other stable coins !

well polycub is still sinking like a stone, so the "40%" is really risky currently. Especially with the 30 day penalty. To be honest, the rewards currently are not worth it which is probably why not many have jumped on board. But it is still important to have liquidity there for Hive in general.

Yea I know what you mean, but still its great to have hbd with other stablecoins and taking part in the defi world.

It's nice to see the balance going up and it's also nice to see people use the unwrap feature. It shows there is at least some demand for people wanting HBD into the ecosystem and I wonder how many of them are putting it to work for the 20% APR in savings instead of entering the pool.

Well at the moment there is around 3M in savings and almost 200k in the pool :)

This pool is laying the ground work for HBD in terms of ensuring that there is enough liquidity for big outside players to come in when they're ready.

We're still extremely under the radar when it comes to even the crypto community knowing that HBD exists, but it can't be ignored forever.

These numbers are good!

Yes and what is interesting is that pHBD is priced better than HBD .... if you follow them both on Coingecko, pHBD is always closer to 1$

Where are the Hive Whales?

What is interesting to see is that most of the Hive whales haven’t jumped on board yet and maybe they prefer the safer 20% APR on Hive, then the 40% plus on Polygon. While the leofinance team has a great reputation, still not to forget that pHBD is a wrapped version of HBD and there is a level of trust in the creator. Maybe introducing some form of multisig wallets on the both sides of the HBD bridge will help in increasing the security and growing pHBD more.

Trust is one thing and the second one is that it's quite complicated and relies on yet another asset (polycub). I added something like 100 HBD to the pool just to see how it's working and had to learn a lot. I still don't know how to withdraw the liquidity. pHBD is not listed on sushi or any other dex. The native Hive savings account is a much simpler mechanism.

Yes it is simple in the Hive savings and you recieve HBD, not other token like polycub.
Adding and removing liquidty is quite the standard for defi apps. pHBD is listed on Sushiswap, becouse the liquidity is there ... its just not a standard token, and you need the contract. This is the case for most of the small tokens.
To remove liquidty first unstake the lp from the polucub farms, then on sushi :)

pHBD is listed on Sushiswap

What I meant is that when you search for a token, it's not listed on officially supported lists and you need to add the contract by yourself. Worth putting some effort to make it listed there.

To remove liquidty first unstake the lp from the polucub farms, then on sushi

But when I visit sushi and "Withdraw liquidity" tab, there is no information about pHBD. I managed to find a way to manually prepare the link to the UI but it's tricky. There's much to do yet to be user-friendly.