A Brief History of Money and Bitcoin

Money has come in all flavors throughout history.

For a long period of time, the only sound money system was money backed by gold. The gold standard era underwrote an age of prosperity and stability for many decades.

However, in the early twentieth century, European governments abandoned gold and fiscal cautiousness in order to fund their war efforts. Since then, we’ve endured periods of rising debt and boom-and-bust cycles.

It's time for a change now. That’s where Bitcoin comes in.

Like gold, Bitcoin is in the process of becoming a highly effective unit of exchange.

It's kind of obvious that Bitcoin is going to lead us to a new age of sound money, but the digital gold (as some call it) will have to overcome some huge problems.

Let's take a look at a brief history of money and the upcoming changes that Bitcoin will bring. These are my personal notes and thoughts from the book "The Bitcoin Standards". 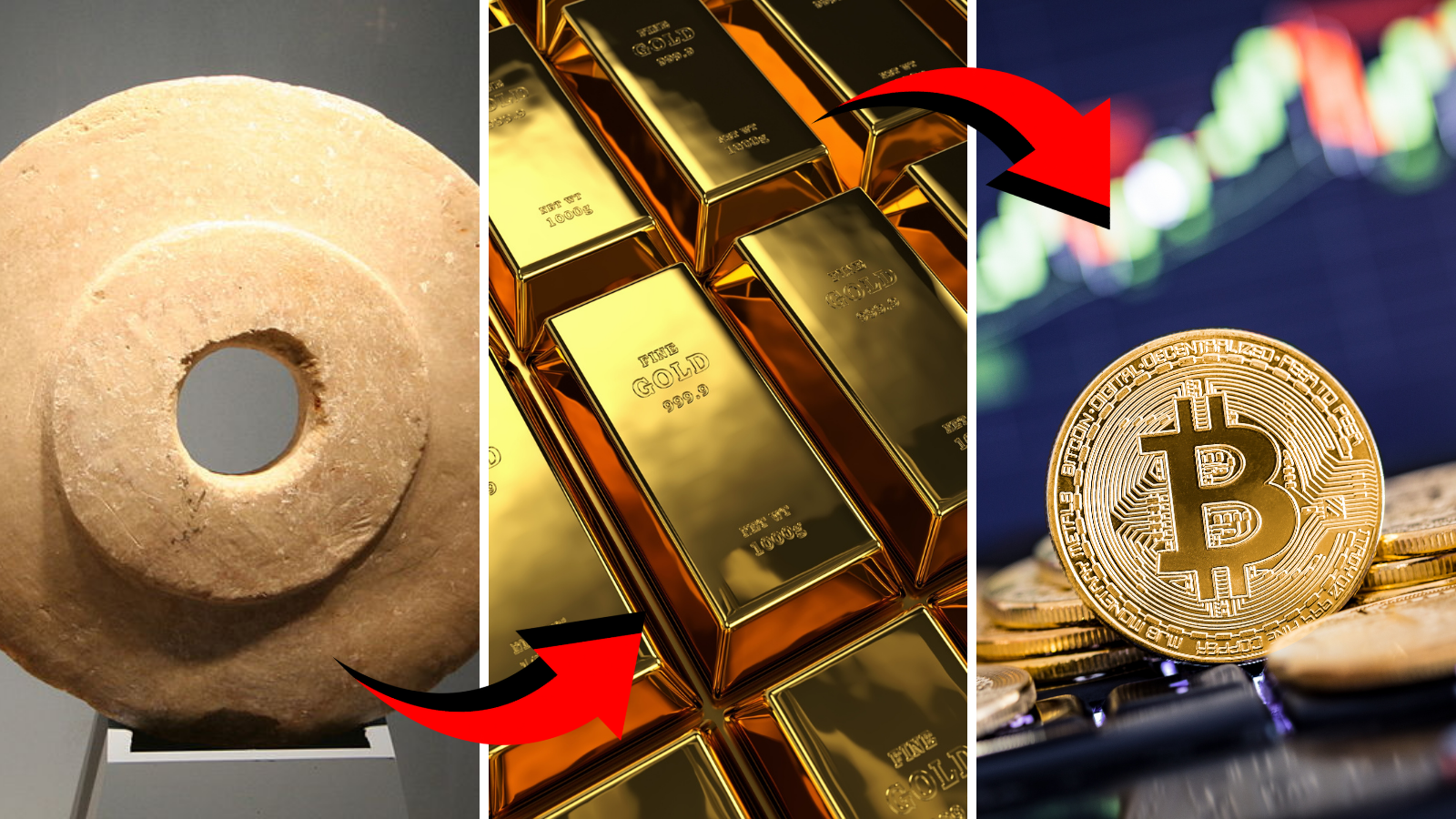 Money Has Value ... When It's Rare

Let's back up a bit. In the old days, we used to swap stuff. It was also called barter.

Take the inhabitants of Yap Island for example. During the nineteenth century, they used “Rai stones” for trading and swapping goods.

This kind of "money" worked well at the beginning because it was based on something rare.

However, that all changed with the arrival of David O’Keefe, an Irish-American captain who’d been shipwrecked on the island.

After a while, Rai stones were so commonplace that they were no longer working as money. They had been transformed back into mere stones.

Gold as the Basis For Sound Money

At some point in our history, gold became the standard currency because:

Those ☝ make gold incredibly effective as a store of value.

In 1717, Britain came up with a way to issue paper money backed by gold. Soon after, 50 other countries had followed suit and more and more nations issued paper currency backed by gold reserves.

Governments Devaluing Their Currencies to Go to War

As you can imagine, this was a very centralized system. After all, governments stored and controlled those gold vaults.

All seemed to work fine, but then, BOOM!

In 1914, war had broken out, and governments needed large amounts of money to fund their operations. Rather than raising taxes, they simply printed new money; which was NOT “backed” by gold.

While the printing machines churned out new notes and bills, no new gold was added to the banks’ vaults.

The standard had been abandoned. Oops, sorry folks! 🤷‍♂️

This event severely undermined the value of existing currencies, and shaped the economic life of Europe after the war.

When World War I came to an end in 1918, the governments chose to introduce fiat money; money backed by decree rather than gold. This was the start of the adoption of fiat money that led to an age of unsound money.

All of this was gonna be maneuvered by the US, which started to bend the rules and inflate its own currency compared to gold. As a consequence, other countries inflated their currencies compared to the dollar to fund economic expansion.

On August 15, 1971, President Nixon announced that dollars would no longer be convertible to gold.

From that point on, the value of currencies would be freely determined by the interplay of the world’s major fiat currencies.

These unsound money policies created all sorts of problems.

When paper money was backed by gold in the past, that underwrote an era of prosperity.

Sound money is a great way of encouraging people to save and invest; which is the perfect recipe for sustainable, long-term growth (which is happening again today with Bitcoin and other crypto currencies).

But unsound money has an opposite impact. When governments interfere with the money supply by, for example, manipulating interest rates, they also interfere with prices.

Unsound-money policies like those implemented by European governments during World War I create all sorts of problems.

Two of them that particularly stand out are:

The overall effect is an endless crisis. But there is an alternative. We need to return to sound money and a new gold standard.

And here we are. The present.

After decades of reckless spending and debt accumulation, it’s about time we return to sound money policies.

That's where Bitcoin comes in. How can the world’s first crypto currency help put our economy on the road to recovery?

If you think back to the gold standard, markets chose gold to store value for two reasons:

This means that there’s little risk of the supply increasing enough to significantly deflate its value.

And Bitcoin surely is scarce. In fact, its supply is fixed. There will never be more than 21,000,000 individual bitcoins.

That’s because of the Bitcoin ledger. When mining computers crack an algorithmic puzzle, they create a block. This is essentially a record of all recent transactions and mining activity.

Each block is added to the chain with older blocks, creating the Bitcoin blockchain.

And all that information is available to every network user. Ownership of bitcoins is only valid once it’s been registered on the blockchain, which is only possible if the majority of network users approve it.

This also makes the point that we don't need a central authority to oversee transactions.

The 2 Challenges of Bitcoin

We know Bitcoin is both scarce and secure. However, there are a few challenges to consider.

Historically, Bitcoin price has been very volatile. Crypto currencies are, at least for now, highly volatile and risky.

These fluctuations are a product of demand. But because Bitcoin is also new, demand has naturally been highly variable.

Will things turn for the better? In theory, these fluctuations should even out as the market grows and more stability is created.

Centralize or Not Centralize? That is the Question!

Lastly, if the currency is to become a new standard, it needs to grow; but growth, even when it comes to Bitcoin, would eventually depend on an increasing reliance on large, centralized institutions.

Of course, there's the hope for the creation of a DAO (Decentralized Autonomous Organization), but that's gonna be a difficult proposition indeed.

Bitcoin may very well be the basis for a return to a sound-money policy world. Will we make it that far in the journey?

We'll see. Only time will tell.

Whenever people bring up the volatility argument I always ask them how does an asset with a $0 market cap reach $1 trillion without going through some volatility? We are in the price discovery phase, and it's going to last many more years!

Of course, yes, you got to start from something.
It was a point to add to the discussion anyway.
Volatility is always something you need to address in conversations. Some people just cannot stand the stress.