@drlobes 65
about 2 months ago
LeoFinance 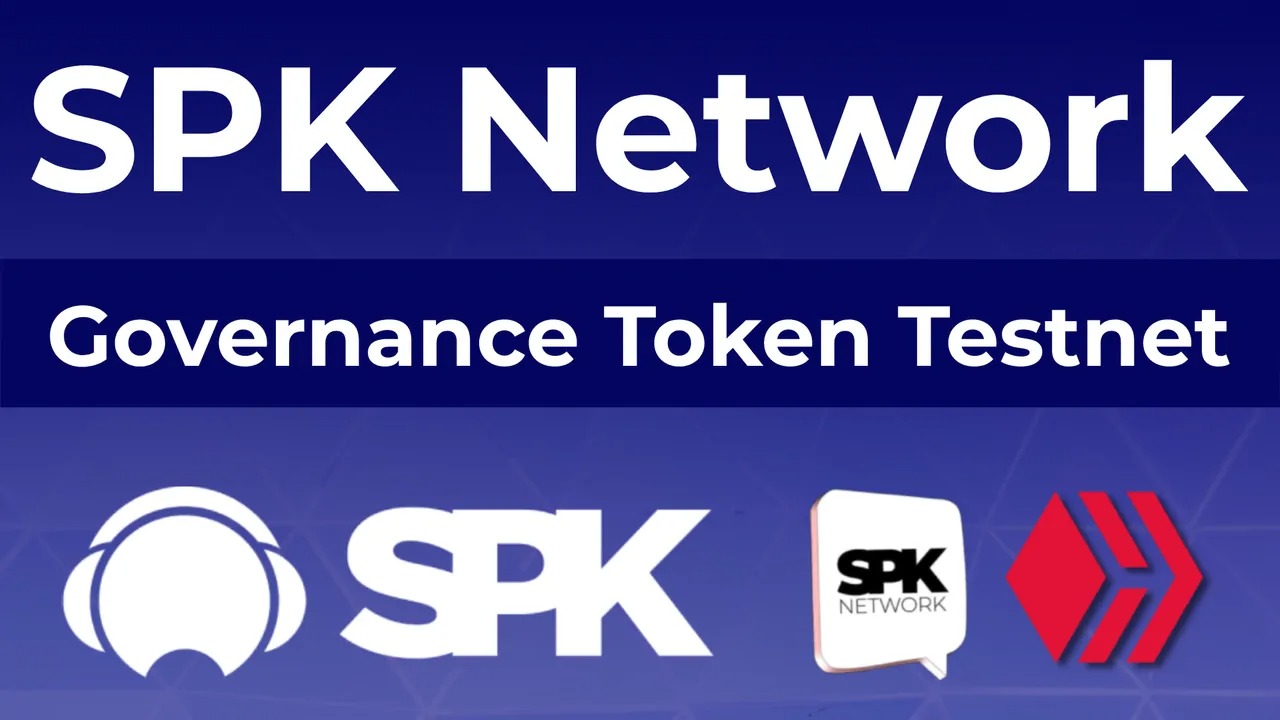 The long-awaited day is coming, SPK Token Goes Live Next Monday. I've been waiting for this to happen for about 4 months now. Just to clarify first for those who don't know. These two accounts @lobes and @carloaxie are accounts used by me @drlobes to run nodes for the Spk network and for the upcoming game Ragnarok.

I said 4 months but to be more exact, HiveBlocks shows that @carloaxie, the account I'm using to run the Spk node posted its first Custom Json Spk Report on March 9th, 2022, first of many more to come since then. Reports need to be posted every 5 minutes and that would make it almost 300 reports a day.

I was there since nearly the beginning when there were only a handful of nodes online, trying to understand how things work and being on Discord and nagging @disregardfiat at every corner or bump in the road. This developer needs to be rewarded with some kind of a medal for being the ultimate coolest nicest guy, he is the developer who even if he was crazy busy always found the time to answer any question we had, no matter how important or not it was. Thank You @disregardfiat for being what you are!

At a later point, I was trying as well to help other people that were going through the same steps that I did in order to set up a working node, even though a clear and concise guide already exists, sometimes you can run into issues not covered by the guide.

My first Larynx claim was nothing special, I only got around 2000 tokens but then I borrowed some more(around 20k) from someone who had no particular use for the tokens then. My current balance locked in governance to run the node stands at 49657 Larynx. From 25k to 45k are tokens that I bought from the market just to keep up with the top guys running other nodes.

Since March 9, my node has been running 24/7 the only downtimes being when something happened with the network and a bug needed to be fixed and the running code updated. For a good while, my goal was to be in the top 3 with the amount of locked Larynx as I understood that the top 3 holder nodes get the most action. I understand that this number will soon change from 3 to probably 20 as the number of nodes will definitely grow with this launch on Monday. 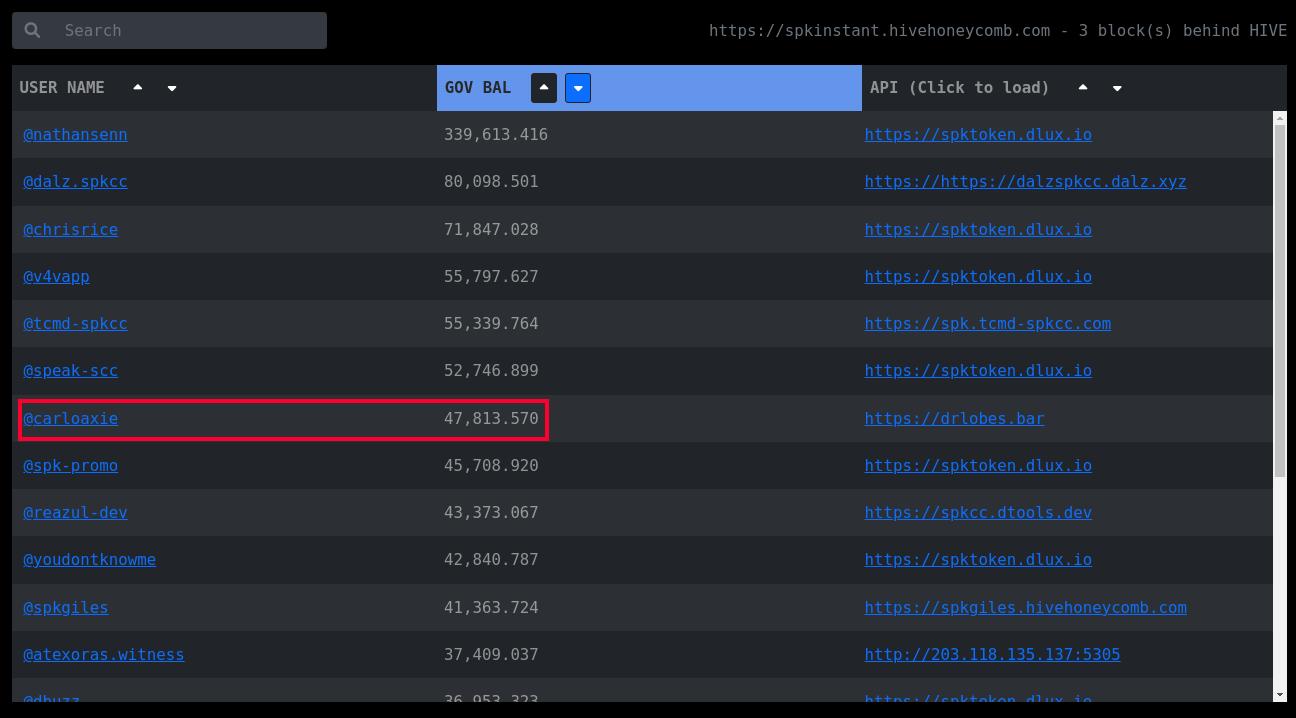 As you can see, I am currently sitting in a healthy 7th place now. The rewards for running nodes up to now were not of significative importance amount or value wise, we all did it just to be involved and support the network, I also did it for fun because why not, but all this will change with the launch of the Spk token and the possibility to receive delegations from other users. Until Monday everything is still in testing mode but I'm already seeing some action with a fresh delegation received from @gadrian and my Spk balance already higher than zero. 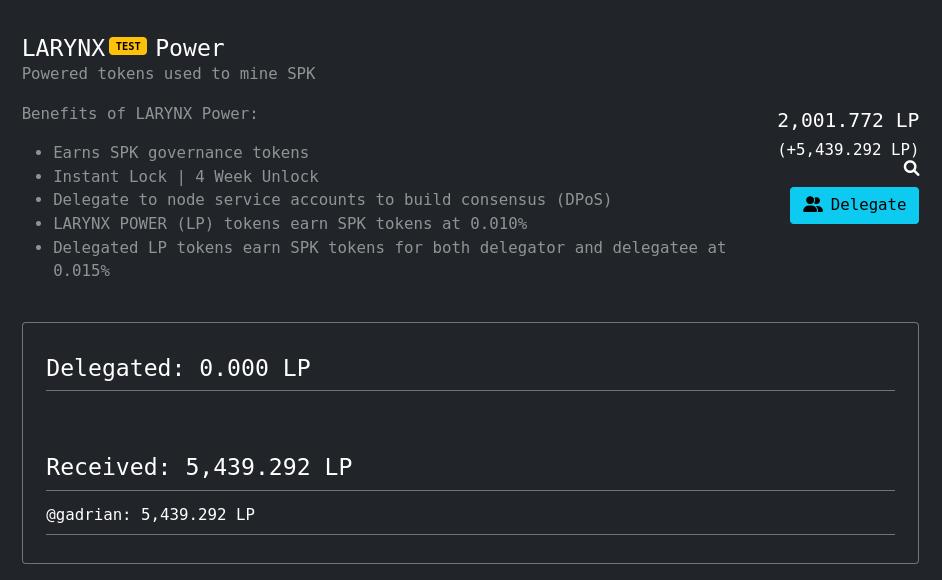 IMPORTANT to know! All the power-ups and delegation that you can do now up until Monday, are all done on a TEST network. To do a real power-up and Larynx delegation you will have to do it again on Monday after the official launch at 7:00 PM Pacific Time (Tuesday, August 9, 2:00 UTC)

If you want to know more details about the launch you really need to check this article if you haven't done it already, as everything is explained in detail. The most important thing to remember is DON'T mix things up! If you want to delegate your Larynx, you need to power it up first. DO NOT lock it as locking it in governance is only for the node operators. "Power is for users that want to earn SPK by delegating to one of the node operators."

My plan is to launch more nodes as the need for them grows, but for now, I'm content with how the current machine behaves. The node is run on a rented VPS server with 4 available CPU cores and 8 GB of Ram which should be plenty for now.

If you decide to delegate then you must read the entire article about the launch as there is a call to action included. I'm going to quote it here as well:

We will upvote all eligible posts with the @theycallmedan account and @threespeak (only 3Speak videos).

If you think that I'm worth handling your Larynx delegation then please select my node from the list, again, that would be carloaxie. If you need any kind of help or have any questions, you can always contact me on Discord drLobes#6382 or on Telegram as drLobes.

I am also running a Hive-Engine node, if you have some WORKERBEE available I could use your support with a vote. The Hive-Engine node is run with the user @lobes and you can vote here or here! You need to be logged in in order to vote for my node. If you decide to do it, I would greatly appreciate it, and please let me know if you did it!

I'll end this, for now, I'll probably make another post with details on how things are going after the launch on Monday. Also, don't forget to claim your Larynx tokens for the current month. My preferred way of claiming is by using this address https://vue.dlux.io/dex/#larynx

Also, if you are active on Hive and you're writing and posting constantly, you might be interested in LISTNERDS, a wonderful platform to help get your content visible to more users than your usual follow-up.

Join ListNerds, send mails promoting your Hive posts, read mails, upvote mails and earn crypto in the form of CTP tokens, LISTNERDS tokens, and Hive (upvoting on your Hive post by the visitors from Listnerds)!

Yay! 🤗
Your content has been boosted with Ecency Points, by @drlobes.
Use Ecency daily to boost your growth on platform!

Great work DrLobes! The Ferengi are proving a formidable force in Starfleet.

😁😆 Thank you thank you! We're only doing it so we can grab all the platinum afterwards! 🤣

@mypathtofire 67
about 2 months ago (Edited)

I like your ListNerds mails. The user personalisation is cool.

Thank you, I do what I can! I love the video animation with voted on LN that you posted above, you should convert it to a .gif file if you want to use it in comments.

Thanks, it is a gif but not showing in the app. 👍

It works now.. but i need to make it abit smaller.

I'm glad you decided to write the post. I hope people will start noticing your nodes if they haven't already.

Thanks for the idea, it's not the post I was dreaming about but there will be more to come in the near future!

Stop dreaming about the perfect post! It doesn't exist. Just say what you have to say, and you'll improve by practice.

It makes a lot of sense, thanks man!

That is awesome and thanks for this. I will have to check it out tonight to see how to power up and delegate LARYNX. All the best to your nodes :)

You can practice on that wallet with no worry. The amounts don't get counted, they will disappear on Monday and you'll have to do it again on the main network.

Thank you, it's great that it's coming on Monday. I will surely stake my small LARYNX tokens and delegate them too

Great post my friend best of luck with the node my friend wishing you a ton of success.
@drlobes !ALIVE
!CTP
!BBH

!LOL you are most welcome have the best day
@drlobes have a wonderful one
!ALIVE
!BBH
!CTP


I told my wife that a husband is like a fine wine: we just get better with age.
The next day she locked me in the cellar
Credit: playbyhive
@drlobes, I sent you an $LOLZ on behalf of @benthomaswwd
Are You Ready for some $FUN? Learn about LOLZ's new FUN tribe!
(2/4)
0
0
0.000
Reply

My friend, which acount you need the larix delegation? @lobes?

Thank you for the effort!

All the best !BEER

Pfff wasn't expecting a reply from you regarding this. For Larynx delegation it is the @carloaxie node/account.

@lobes I'm currently using only for the Ragnarok network, but if @carloaxie will get too busy, I'll spring another node on @lobes as well.

Hey @drlobes, here is a little bit of BEER from @sandymeyer for you. Enjoy it!