This is the second bull cycle for our platform as we had one in 2017 as well. Those who have registered to /Hive before the first one may have bitter sweat memories, those who registered during, may have only bitter memories.

My story is quite simple as I joined in January 2018, on the 20th to be precise, without any investment and very little expectations. STEEM was trading around $4 at that time and was dropping day by day. My feed was full of posts about the price fluctuation, investment plans and strategies. Most of the users considered that STEEM under $1 is a bargain and jumped in both feet when the price hit levels under $1.

I still remember a few users posting about their investment, being happy to be able to make such a good deal. Then all hell broke lose and on the 17th of December, 2018, STEEM hit $0.21. Some of those who invested at $1 disappeared right away, others have never mentioned their investment ever again.

It's a long way from $8.19 to $0.21, or not, as it happened in 1 year roughly and what came after that was hovering in that region till we forked. Hoping to get their investment back at some point has been in vain.

The question is, can we compare the two cycles, or can we expect this cycle to be something similar to the last cycle? 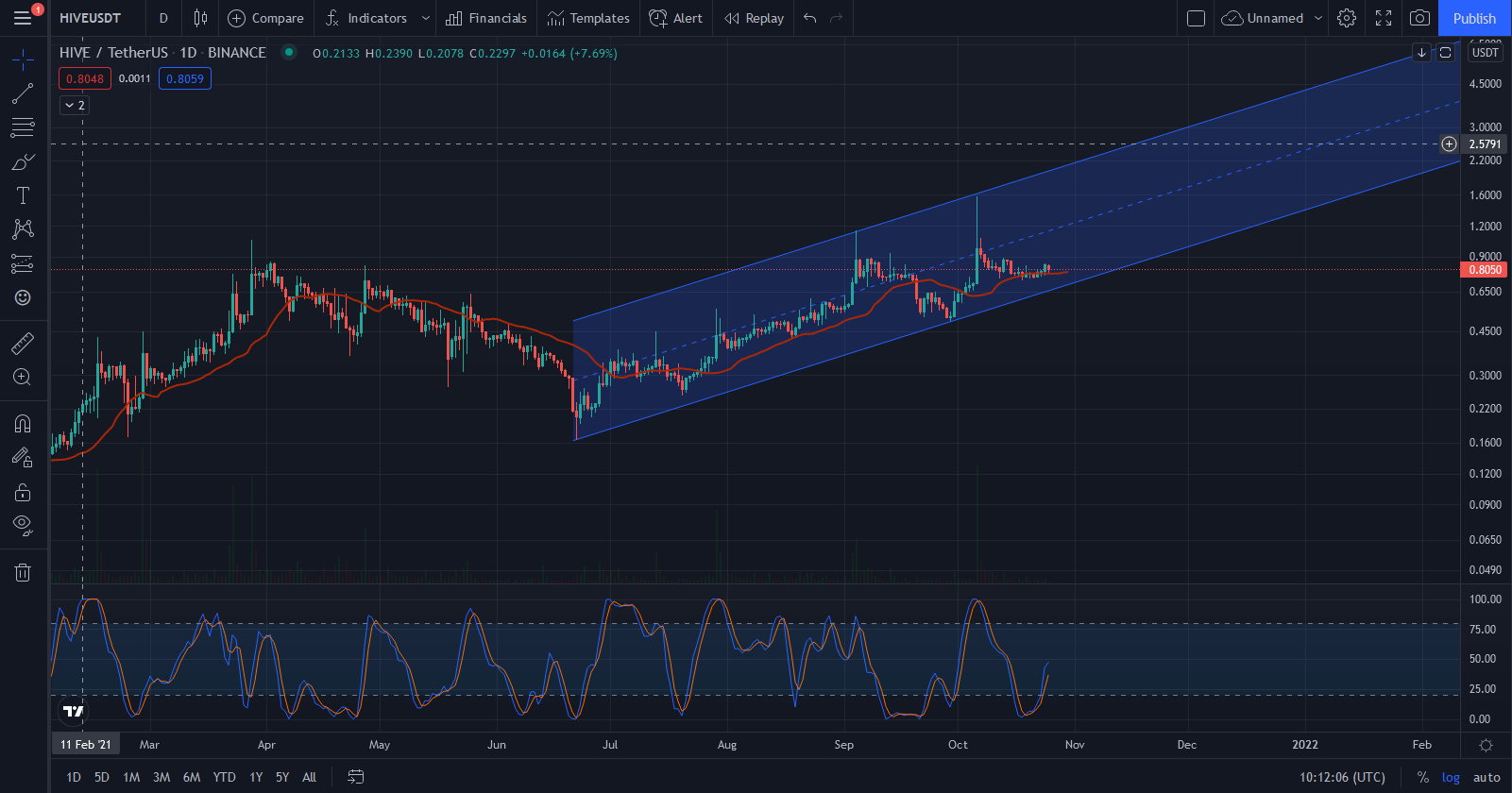 If I draw the channel and extend it till February (just a guess as this cycle can take longer), the chart says HIVE could reach $6 - $7, even $8 till then. Obviously no one can guarantee the price will stay in the channel, it can break up or down, depending on what people think about the asset and what their action will be during the last leg of the cycle.

STEEM has already reached $8 once, that was the ATH but I don't think we can attribute that to HIVE as well. After more than one year of independence, HIVE has it's on life now and it's time to write its own history. So as far as I'm concerned, the ATH for HIVE is $1.48, that was reached on October 6 this year.

What Does It Mean For The Platform

Reaching $7 would mean a 10x from where we are now and would mean a very new ATH. Many are prepared to sell HIVE high and buy back low. I suppose deep pockets are prepared to go big as this is not an every day occasion. Taking profits is normal and has many ways to do it.

After some thinking, I decided to take little bits of profits on the go but not power down my stake at all. I mean it would be great to make some profit in HIVE (sell high, buy back low and power up), would be amazing to have more to curate with and delegate to projects, but not now, maybe next time. I have other assets to gamble with, HIVE serves other purpose in my portfolio.

However, what I'm interested in is how this bull cycle is going to end for HIVE, what the level of entrancement will be when the cycle is over. I suppose those who are planning to buy have the best interest for the platform and most of the Hive will be taken off the exchanges and will return to the platform, where will be put to good use. If I were to predict a bottom for Hive after the bull run, I couldn't, but I truly hope it will be way above the level we're at right now. Falling below these levels would be a real shame and I don't think it's going to happen.

There's a difference between pump and dump and having an increase due to rise in value. Our platform has been developing with high speed and it's just a matter of time till we double or triple our userbase, which will also bring a rise in price value.

This is a question I don't have the answer to. It happened on the 6th of October this year. It's possible others know who it was and what's happened with the HIVE bought. Let me know. 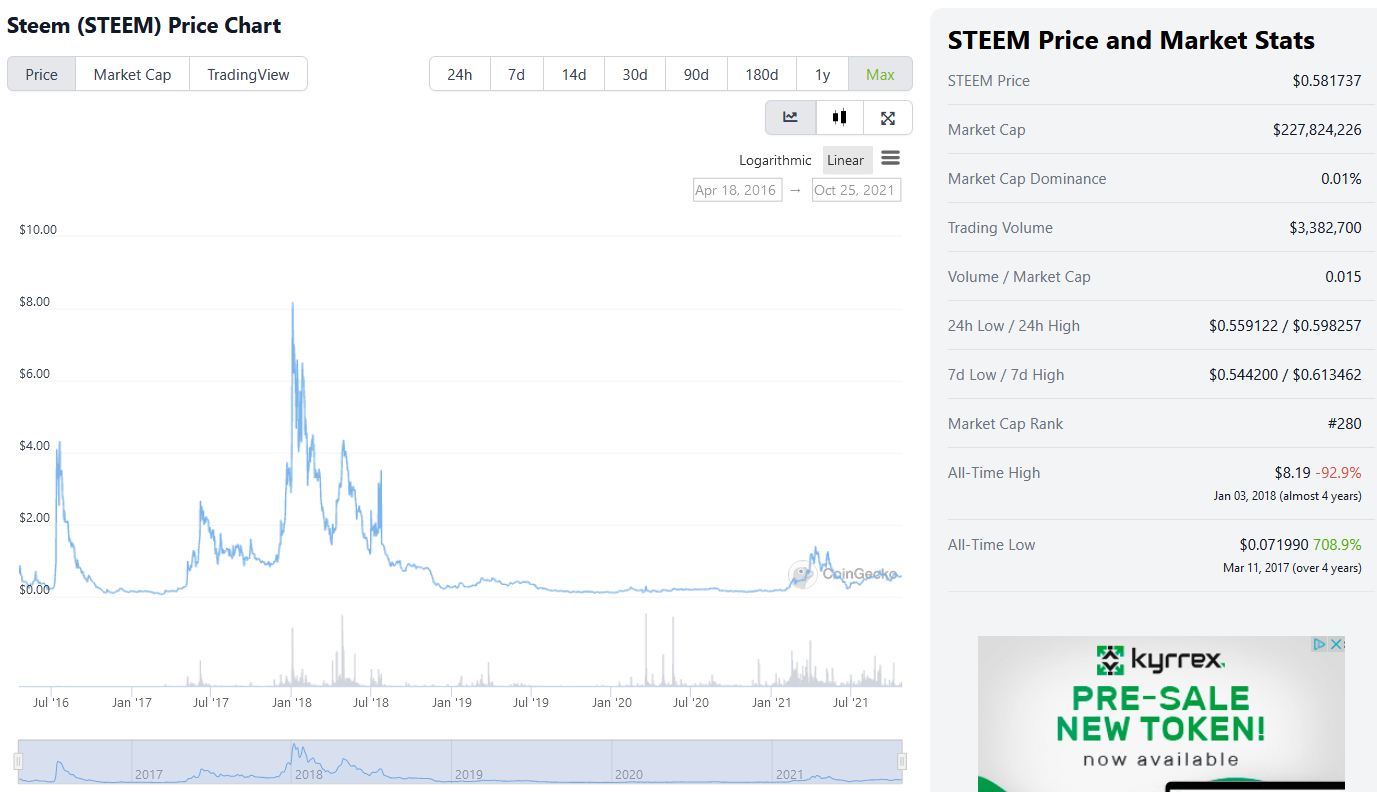 The Grass Is Always Greener On The Other Side

Just for the record, I'm not holding any STEEM, nor have any interest in the platform, but if I look at the chart and see where they are after 5 years, oh boy! 🙈 STEEM at $0.591269 is like back to square one and all this after 5 years.

So in this case the grass is greener on our side as for us the only way is up. We've been holding this $0.75 - $0.8 level for some time and we're going to have a nice leg up next.

This post is going to serve as a diary. I'm going to check back after the bull cycle is over, to see how accurate my prediction was, although I'm not considering this prediction, it's just something that can happen, or not.

So, tell me, what's your prediction? What is your crystal ball telling you? :)

Everyone hopes the Hive will soar dramatically in the future, I'm pretty sure it will happen soon.🤗🤗

I hope there will be big investors in Hive, because that's the best way

Splinterlands has shown that in the click of a finger things can take off. Hype is hype is hype, nothing beats it. We are all early.

I really believe in the hive holders here to be able to boost the Hive to the top level, we definitely can 🚀🚀🚀
Have a nice day @jphamer1

Since the first day I joined this platform I knew there is something great about Hive, a coin that has a great potential to soar higher. I'm not good at predicting, but with the way things are going I think Hive will hit $8 - $10 maybe in the next 5 years. The Crypto world is crazy anything can happen 😅.

"However, what I'm interested in is how this bull cycle is going to end for HIVE, what the level of entrancement will be when the cycle is over." Exactly - this will define at some extent how promising is HIVE's future.
STEEM is watching HIVE's back for the last months (if I am not mistaken) and in my opinion it could happen even earlier. Bubbles tend to go POP :)

STEEM is watching HIVE's back for the last months (if I am not mistaken) and in my opinion it could happen even earlier. Bubbles tend to go POP :)

I'm afraid I don't understand what you mean :(

Sorry, thought it wasn't hard to get. Will text you later🙂

Today I'm slow and my head is full of other problems :)

I am inclined to think that we will see a slow and steady increase. I don't have any reference how correlated HIVE is to BTC. I do expect large gains for BTC, which potentially could mean gains for HIVE. But, we'll have a bear market eventually.

I suppose it's all about the time scale. In 10 years, BTC could be spectacular. In 10 years, HIVE could also be spectacular. As more users become dolphins, orcas, and whales, it becomes less and less necessary for them to cash out significant portions of their stake. Whereas small accounts necessarily have to cash out large percentages to make it meaningful. In other words, as we become more prosperous as a community, we will rely less and less on the overall earnings. This means more scarcity.

Hold your horses mister :) I know this is long term, at least for me it is but can't even begin to speculate what's going to be like in 10 years. First we have to get through this cycle and then prepare for the next one.

But you're right, this ecosystem has a great future and we'll be here after 10 years, I'm sure of that.

(which would put it at #22 by todays numbers)

Hey @erikah, sorry to jump in off-topic.
Do you mind reviewing and supporting the Hive Authentication Services proposal? That would be much appreciated.
Your feedback about the project is welcome too.
Thank you.

Voted, thanks for the reminder.

Thank you for your support my dear, really appreciate it! 🌹

My pleasure, keep up the good work! And thanks for the lovely rose :)

@steemmatt 70
about 1 month ago (Edited)

I rode the entire last full bull run from the bottom to the top and back down again. Selling a % of your Hive at the top (even if it's from powering down) is probably a move you'll appreciate in the long run. Do the math on your HP if Hive 5x, 10x, 15x, etc., and make sure you can live with the dollar value going to that point and potentially back down to today's levels. Hitting the sell button isn't easy, but that's how you make substantial money. These types of moves are where significant wealth can be accumulated and compounded later during a potential bear market (whether you stay in fiat, buy into BTC which drops less, or put it into stablecoins/defi to earn passive yield).

If you sell some, you've protected a portion of your profits. If it drops, you have more flexibility. If it goes up, you have plenty and a nice income stream coming in from your posts to build it back up. Just my two cents.

If you truly want to hold all your HP, there's nothing wrong with that. I just get nervous about people holding their HP staked too long in another end-of-cycle run where life-changing money comes and goes, while those who sell gain a few legs up. I've never invested in Hive because it's too centralized for me, despite the natural claims that it's not (marketing), so I have a drastically different view than those who've invested.

I understand what you're saying and obviously there are benefits, but I don't think I'm going to use my stake this time. I have a few portfolios, here and there, serving different purposes, so among those there are ones that I'm going to use in this bull cycle.

Thanks for your opinion.

Just to let you know, I slept on it and consider what you said a good option. Will take some profits after all 😊

@steemmatt 70
about 1 month ago (Edited)

Decisions are best made after a good night of sleep. Even if you change your mind, having some HP unstaked and liquid in preparation at least gives you the freedom to make sure a move if you plan for it. If everything is staked, then you're completely stuck outside of waiting for powerdowns, during possible quick market moves. Taking a % of profit is never a bad thing as hard as it is to actually do since we get so emotionally invested in our digital assets.

@darkflame 67
about 1 month ago (Edited)

I WAS THERE @erikah Lol, I'm glad to hear but why are you tagging half of the blockchain? :)

@darkflame 67
about 1 month ago (Edited)

I don't think tagging the witnesses I vote for is tagging half the blockchain. I took the time to make that graphic, and just wanted to share it with my friends.

What a trip down memory lane. lol. I started in Aug of 2016 so, I rode it down to the bottom twice. lol.

While I totally agree Hive has to create it's own history now, and that it is a bit of a different beast. I still expect a late pump after Bitcoin peaks prior to the next dip, which I still think will happen.

Of course it will happen. I'm expecting a peak myself, just like everybody else, just have no idea how far we can get. Can we make a 10x or more? 😀

I will be waiting with liquid HIVE for these spikes that pop up now and again, hopefully one hits double figures in the next 3 months :)

You're optimistic about double digits, however I wouldn't mind either 📈