What You Want And What You Get

A few days ago I saw a finfluencer publishing a call that was given in their paid group. You don't see that often as paid groups are for members only for a good reason. At first it made me smile, then I thought let's see how that's going to play out. I need to mention the call was published a good few hours after it was given in the group, when there was no way to get that entry anymore, so whoever saw the call, could think damn, this is what I am missing, by not being in the group. 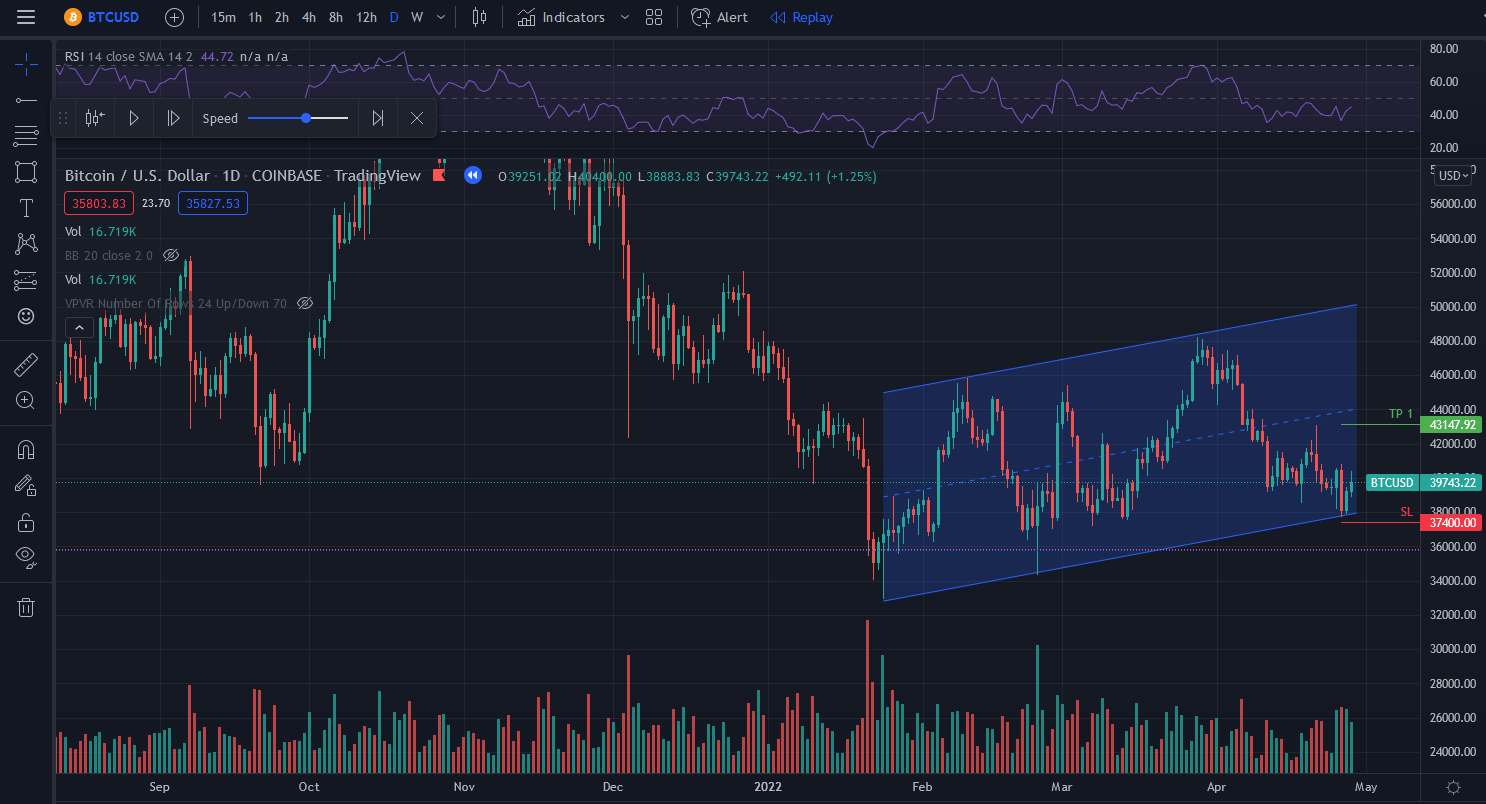 Approximately this was the setup given. SL under previous low, obviously, at around $37400. With the first TP set to a little over $43k, it would have given anyone a 10% profit. 10% may not seem much, but with a considerable position size, you can make a nice profit. And this was only the 1st TP point, the rest was left for later. 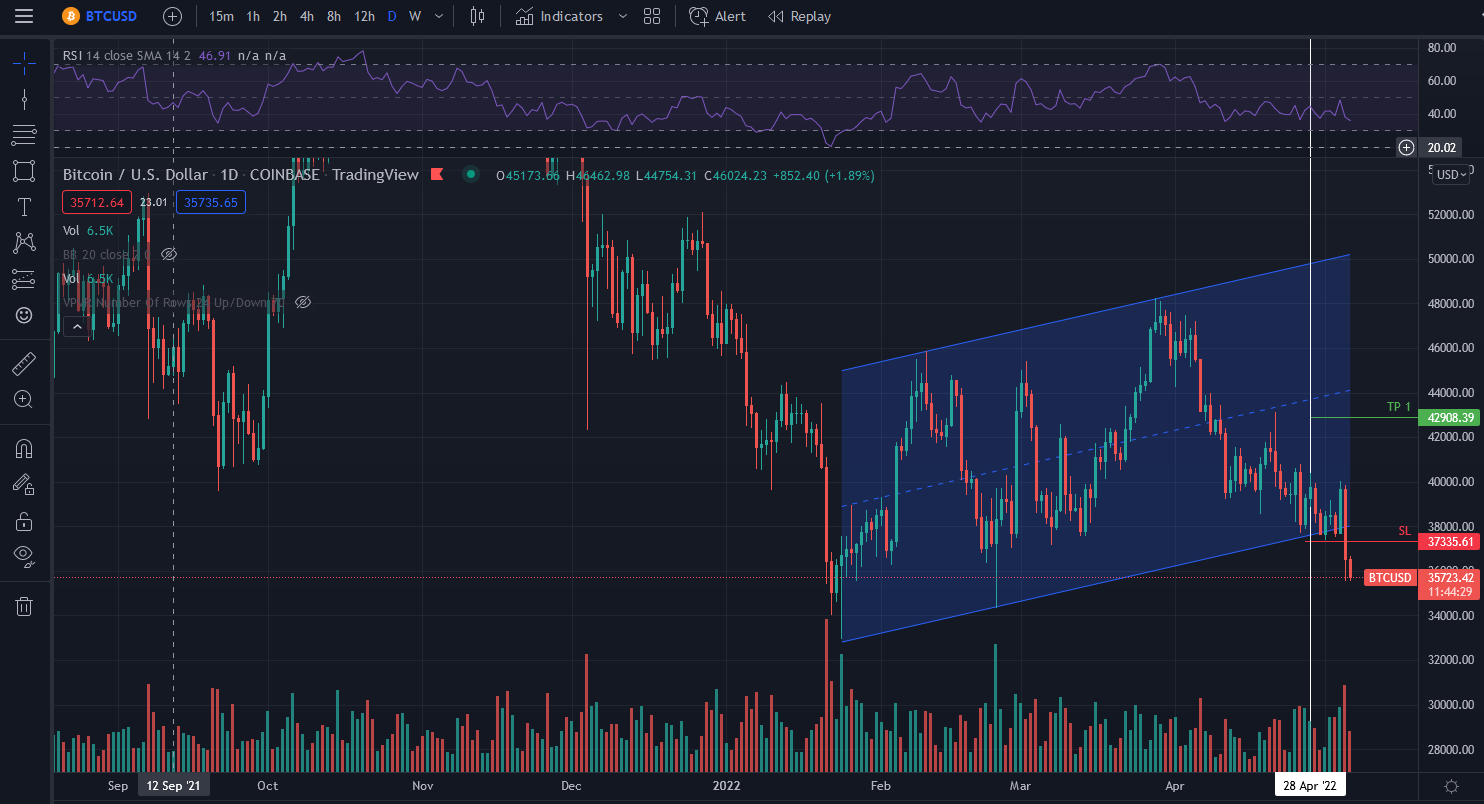 Since the call was made, BTC has been going up and down, getting too close to the stop loss quite a few times. Then yesterday all hell broke lose, we had the dump that looked like a bungee without a rope. Imagine how many stop losses got hit, how many accounts got liquidated.

The golden rule in trading is, stop loss under previous low, everyone knows that, including market makers and manipulators.

What Do Paid Groups Offer

It depends on the group, but usually they offer a mix of TA and calls to satisfy everyone's need. There are different levels of memberships, the more you pay, the more info you get. Don't ask me for specifics as I've never been part of one, but usually this is how it works.

What Do Subscribers Want?

Without any thinking, subscribers want results. Some subscribers are there to learn in order to be able to stand on their own feet one day, while others are paying to get the calls and get rich without learning. No one can blame them as learning is not easy and you can lose quite a lot by trying to do it on your own.

In this case, the market took a turn and broke down, instead of breaking out. Unless they gave a new call before the dump, to get out of their position, I suppose they got liquidated. This happens to any trader from time to time as you won't find a single one with 100% win rate (if a trader tells you he or she has a 100% win rate, that is a lie), this is why we have stop losses. However, getting stopped out constantly may raise some questions.

You may have seen crypto influencers, finfluencers harshly criticizing paid groups. They say there's enough info for anyone to learn trading for free, there's no need to fill the pockets of paid group owners or in many cases let yourself be ripped off. Unfortunately there are so many scammers that gave paid groups a very bad name.

We all know these paid groups are not cheap and we also know how they are making money. How many times I've seen them trying to shame people after a pump. The worst is when you see them telling people they will die poor if they haven't bought an asset when they called it. These are cheap shots and should be taken as warnings. I could never respect anyone who is trying to make money by shaming others for not buying.

However, this doesn't mean I am against paid groups. I'd never pay for a membership, I'd rather learn how to fish, instead of buying the fish. I just wanted to show an example of how things can work out. If you think you have no time to lean, or you don't want to, just be aware that no call is a guaranteed success, no matter who's making the call. There are risks and you're the one wearing the consequences. 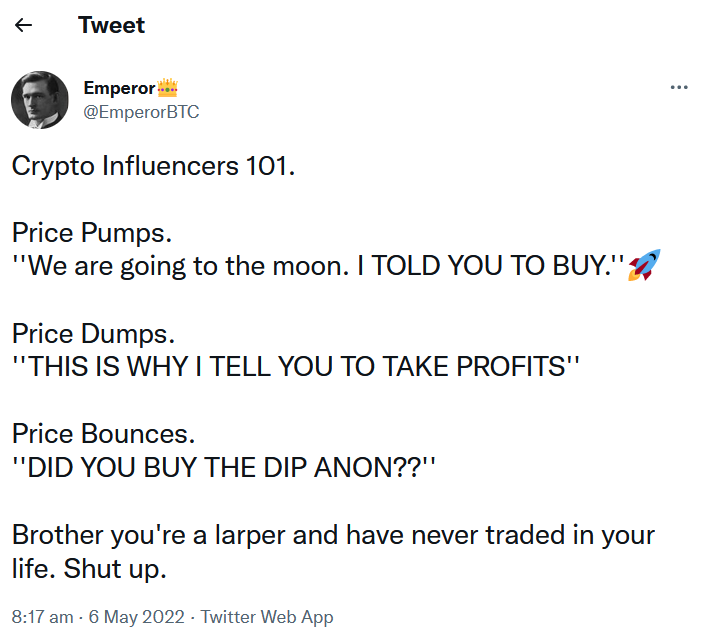 Emperor is always voicing his opinion about finfluencers and paid groups. This morning he posted this tweet, which is definitely worth reading and kept in mind.

Crypto is here to stay, so the more you're learning now, the better will be for you in the future. Fill your own pocket, instead of making others rich.

The biggest secret in trading is less than 10% of traders profit. the other 90% lie to themselves and their investors every morning when they look in the mirror and cant admit to themselves they suck at math.

i have found just learning each individual tool and reading the theory ENTIRELY before applying it has provided great results.

the Bollinger Bands are for noobs, if you cant set a standard of deviation and make a profitable position within a day, trading is not for you.

I tell people aall the time, the reason i am somewhat successful at "crypto" is because i dont ask for their money.

why would someone need your money if they were a good trader?

they would already be one of the 10% of people who keeps their job in the banking industry with a nice salary and benefits crcrypto doesnt have.

Of course ...the so called Billionaires helping the poors and the dumbs for "little"money advices fucking LOL

I rather trade for 6h but at least you having fun , those people are leeches.

i have writers block for traders. i can see my plots fine, its not like a fog of war, but i am just not inspired at all to look at charts, i used to get excited and I still love math, but i think i sat and traded so much during blowvid lockdowns that i need a vacay.

i keep remembering the Wolf of Wall Street chat at the begining of the movie, where he says he needs to be jacking off at minimum 7 times a day lol. Maybe it works? lol wouldnt knowuuntil i tried.

Market is not the best for hodlers at the moment , least we can say .
Charts can be depressing and it is true that we need breaks .

i took a good short position on waves and on zcash. Waiting for $0.5 or under hive because i think its extremely overinflated by staking and once more users hop on the price will plumet when more journalists sell for profit.

I am taking profit on good placements and wait for the real lows .
I am enjoying this bear market .

just booked a contract for the next day or so, $30/hr is going into the ATM faster than my records at my business are updated.

i guess i lost half of my income on the way home from work, must have blown out of my pocket, i guess ill be able to pay capital gains on 50% of my innitial capital, seems to be a heavy loss of sorts, rough quarter 🤣

Look at that suicide bomb ! waiting for $0.1 so i can zero this cunt whale i hate on here.

It hit 3 cents in the crash?

Because they think they are giving you information that they have worked for. In other words selling you the knowledge they have gained through hard work.

And many trust them as they are hyped.

the cycle of abuse, fear uncertainty and doubt being stroked through their ego with a blissful touch of fear of missing out.

its odd none of the tools i use to chart have the last name of someone using social media.

it would be interesting to use a real functional expression of math, even just a visual tool developed by a living person. Not just some copy and paste innovation either, real intricately valuable and insightful theories into the expressions man kind makes on the bear and bull with the theory well developed, not just slapped together for attention and knee jerk reaction.

A lot of TA tools lack the real application and use cases just like a lot of crypto projects.

100000%
The worst thing is the teachers teach the hungry who then wants to be a teacher for the same reasons ..SCAMMING everyone for money with fake knowledge . Becoming the monster creation of the monster .

We see this pattern in many scams .

not exagerating i wouldnt see the death penalty as unreasonable for this. Manipulating others should be as bad as murder, you can cconvince people easily with money to kill someonebfor you and it happens everyday.

Tell me about it ! my last years felt that way and when you think you find a friend it is only another pit in hell . I have got stolen large amount of money and belongings in real life not long ago and by irony , been called a thief .
Anything can happen to us in this insane world and i am not looking for friendship anymore, i am not looking for nothing , because indeed ,it is very dangerous .
The closer people want to be from you , the better they can steal or kill you .
I am happy to say i am in a somehow safe place now .
And you too stay safe ☀️

happy to hear your safe, i was a victim of a gunpoint robbery once, and sinsince them i have been a fire arms riggts advocate who supports open carry, stand your ground, and castle doctrine without forced entry requirment.

i would like to be god on my property and choose who lives and dies or thats not really a domain i control if i have to ask for permission in anyway to protect myself or family.

Pay a rich dude to earn LOL
People just dont get it .