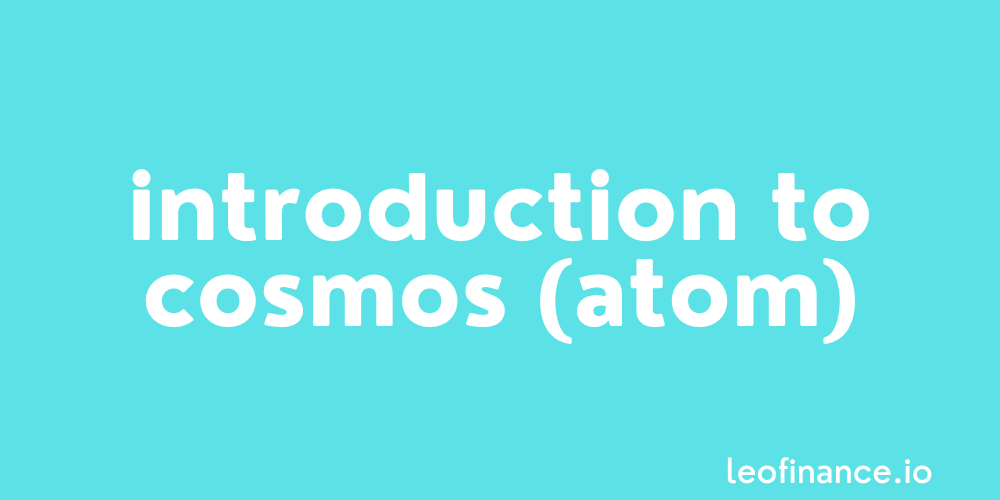 An introduction to Cosmos (ATOM), the decentralised network of independent parallel blockchains.

ATOM is the native cryptocurrency of the proof of stake (PoS) blockchain known as Cosmos.

Cosmos is a decentralised network or ecosystem of blockchains that are all linked back to a central hub and acts as an intermediary.

While each running independently of one another, each blockchain (or zone as they are known) is tethered back to the Cosmos Hub where an overall record of their state is maintained.

In the team’s own words, the goal of Cosmos (ATOM) is to “create an Internet of Blockchains, a network of blockchains able to communicate with each other in a decentralised way.”

This is achieved by cultivating and supporting the Cosmos ecosystem of blockchains, allowing them to all share data and easily transfer tokens throughout the network.

For an in-depth look at the project, we’d encourage you to check out the Cosmos whitepaper, but let’s now jump into our own high-level Cosmos (ATOM) guide to discuss how it works, what it's used for and a whole lot more.

Cosmos is powered by the consensus protocol called Tendermint, allowing developers to create proof-of-stake blockchains that are fast, scalable and most importantly secure.

Founded by developers Jae Kwon, Ethan Buchman and Zarko Milosevic in 2014, Tendermint went on to form the base required for Cosmos 2019.

It’s important to stress that it was the project’s Tendermint roots that has allowed Cosmos to flourish into the thriving blockchain ecosystem that we see today.

As we head deeper into our guide to Cosmos (ATOM) from here, you’ll see that Cosmos is really not a project of its own in the same way that you’re used to thinking.

Rather, it’s the base hub for an entire ecosystem of interconnected, independent blockchains and Cosmos makes interoperability a breeze.

By building on a modular set of tools, developers that choose to work within the Cosmos ecosystem have everything they need to start making the dream of a decentralised internet, a reality.

I know this content is short and extremely high level.

But that's the point!

This is just an intro for our already completed Cosmos (ATOM) guide also published separately to keep pointing Google in the right direction.

Remember the goal for this project is to eventually have a leofinance.io based, long-form, evergreen crypto guide for every single coin or decentralised project in existence.

While the content is currently a bit of an unedited mess full of gaps that need to be filled, seeing people continue to link back to our long-form LeoFinance Crypto Guides has inspired me to pull my finger out.

Alongside publishing this, I want to give a shout out to the rest of the LeoFinance community for recently producing a ton of excellent Cosmos (ATOM) related content.

I’d encourage you to click the #cosmos tag and go through the recent feed to read and reward what you see fit.

There’s just so much content here that deserves to be rewarded on merit.

Thank you for this information on the COSMOS blockchain ... now everything is a bit clearer to me why it is called the Internet of blockchains

Let's look at the label for more information.

Any dapp worth the bridging effort? Still didn't have a chance to check Cosmos out.

I liked the concept of the internet of blockchains, and it is something possible and they are achieving it little by little.

It's too bad the crypto-guides stopped. Is this an attempt to just fill up the old posts and make sure all of the spots are full?

I've gotta fix up the guides we've got before starting new ones.

Right now, we have soooo much content that just needs to be edited and properly aggregated.

What a great introduction! I know way to little about the cosmos (in crypto terms, lol), but now I feel that I can explain this to my mom! :D

Awesome xD Are we getting @crypto-guides back in action? Wen wen wen?

Present forever on the blockchain xD

Thanks for the update! Great article.

This is the first time I've heard about Cosmos (ATOM). But after reading your post, it sounds like a great idea. Can't wait to try it.