Juno Prop 16 through a Steem to Hive hard fork lens 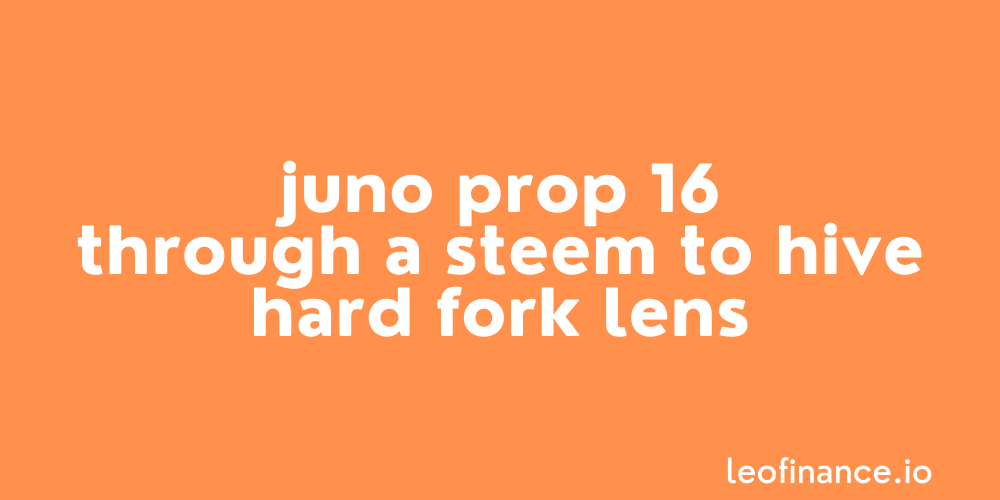 The backstory and my opinion on looking at Juno Prop 16 through a Steem to Hive hard fork lens.

Have you seen what is currently happening on Juno?

It’s an absolutely wild story that essentially saw a whale game an airdrop that allowed them to end up with a shitload more tokens than everyone else.

In essence, a share of the token’s supply that puts the entire network at risk from a governance perspective.

As a member of the Steem community that eventually moved to Hive after the hard fork required to remain decentralised, this story has captured my imagination.

I take a look at Juno Prop 16 through a Steem to Hive hard fork lens and offer my opinion on the ideal outcome for not only the Juno community, but crypto as a whole.

What happened with the Juno airdop?

So to cut a long story short, the whale basically split their staked ATOM into a ton of wallets just before the airdrop.

While the ‘rules’ were that each person (not wallet) was supposed to only claim once, obviously it was technically doable and games were played.

Due to the airdrop code written in the smart contract, this meant that this particular whale was eligible for a shitload of JUNO and resulted in them receiving what is essentially a huge pre-mine.

Now the community is using an on-chain voting mechanism by other users to steal back tokens worth tens of millions of dollars.

With that in mind, a new proposal has been put forward to essentially draw down the wallet of whoever this whale is, to just 50K JUNO tokens.

50K being the number of tokens that the ’rules’ (yep, again just something written down in text and not in the code) said was an individual’s fair share of the airdrop.

Juno's proposal argues that reversing the decision is more than just in the interest of arbitrary fairness.

But due to the whale being able to gain a large share of the network’s voting power, it's now a matter of network security.

While this seems fair enough on the surface, it poses some serious questions.

The biggest being: If there is a way for people to simply vote away the stake of others, doesn’t that immediately make the token essentially worthless?

Comparison to the Steem to Hive hard fork

This is not a blockchain forking to rewind a hack like we saw with Ethereum and more recently with Steem.

In one of today’s CoinDesk opinion pieces from the website’s Chief Insights Columnist, David Morris compared the saga to Justin Sun’s removal of voting rights from some tokens during his takeover of STEEM.

But that was completely different

These changes are not coming about via a hard fork.

They’re coming about via an on-chain voting mechanism.

The difference is that when a community decides to fork, you aren’t stealing any of the original tokens.

For example, Justin Sun didn’t get any HIVE.

But he still retained all of his STEEM.

There was no theft here because quite frankly you can’t have something that you never owned stolen.

In the case of JUNO however, the community is voting to straight up steal tokens from a wallet just like anyone else's.

So here we have an element of trust required in a supposedly trustless system.

A completely and utter failure.

For me, it’s fun to watch the concept of blockchains involving a social element on top of their technical consensus.

JUNO’s airdrop Sybil attacker played the game within the rules set out by the smart contract.

But not those socially acceptable by the community.

A fascinating concept and a show that those of us here on Hive had a front row seat to watching when the community shifted across from Steem.

Here, we refer to the community as layer-0 because in the end there is a social element that gives tokens value.

You’ve heard the saying that something has value because others believe it has value?

So this means that the community is the most valuable element of any cryptocurrency.

And that’s exactly what we’ve seen play out in the Steem > Hive split with the community moving to Hive.

In the end, value is reflected in the respective token prices over time.

By forking and retaining their community layer-0, the Hive blockchain has become extremely secure to such attacks.

By removing the pre-mine and using the rewards pool as the primary mechanism to continue to distribute inflation, HIVE’s token distribution is actually extremely decentralised.

If an attacker was to come and control enough tokens to pose a security risk to the chain, then they would be forced to buy HIVE off the market to do so.

This would push the price of HIVE up massively, thus being extremely expensive to achieve for the attacker.

Ultimately with the risk of the community at layer-0 just forking the chain and starting again without the bad actor’s stake.

THIS is how you achieve security.

For me, it doesn't matter how the JUNO whale got their tokens.

The crux of the matter is that they now have them and the community needs to deal with it the best way they can.

And that should never involve stealing someone’s funds.

As soon as you go down this path, the entire network may as well be a database on someone’s computer and the tokens become essentially worthless.

I would implore the Juno community to be extremely careful of the direction they head and use Hive as a prime example of how to correctly secure their network.

Of course, the Sun saga did have freezing of tokens which is essentially an act of stealing. Some of the larger STEEM holders had their STEEM frozen and still havent gotten it back.

But as he controlled so much of the supply, he was able to use that stake to elect his own sock puppet witnesses that meant he took full control of the chain.

After doing this, he then used that power to freeze the STEEM accounts of witnesses and big stakeholders who were involved in the soft-fork.

That is theft because it was STEEM in their wallets that was taken away.

But the community forking to Hive and choosing not to airdrop his wallet tokens is not.

You can't steal something you never had, let alone were never even entitled to!

It sounds like an interesting case and I have to agree that kicking people out of the system (no code backing it) is a good idea. It seems like someone was not happy with how someone wanted to game the system and they are just doing a hot fix.

My issue is that there is a mechanism that allows this to happen at all.

It is a slippery slope and for me it makes the JUNO token all but worthless.

Just not worth the risk.

I wouldn't be surprised if someone from steem was behind it or at least involved :l

Shock horror that Justin Sun isn't the only bad actor in crypto! ;)

I did not know about that specially when I jumped into Juno recently to stake more. It is interesting how social layer becomes a strong norm and regulatory body. I am not sure who is at the fault here - one who gamed the system in a way that is socially immoral or the others who are acting on moral correction with an action not backed by the code. So, who is legit? The code or the community?

The code should be law.

Nobody should be thinking about, let alone technically able to remove tokens from someone's wallet.

If the community wants to fork and redo the airdrop like Hive did, then they are free to do so.

The best solution is to fork. Let the community decide which chain has more value. Let the whale keep his spoils, fork it and give him 50K in that one.

No stealing, no compromising the integrity of the chain... lot's of work.

In my opinion, this is the only way.

Once you remove tokens from someone's wallet, then there is no going back.

The fact that this is able to happen means trust in the network disappears and the token surely becomes worthless.

and it that happens, someone will likely fork it at that point with the caveat of never stepping over that line.

Felt so good when we kicked Justin's ass.

I'm personally looking forward to the day that he gives up and the Hive community can buy back all the STEEM assets for pennies on the dollar.

Damn I want that steemit domain back.

I'm actually hearing about JUNO for the first time but I still don't understand how Steemit and hive is involved in the airdrop.

Can Steemit/Hive users claim their airdrop on JUNO?

Sorry for the confusion.

Just to be clear, JUNO has nothing to do with the Hive blockchain and there is no pathway for Hive users to receive an airdrop over there.

I'm just trying to compare a governance decision of theirs with what happened in the past on Steem.

My first thoughts were: Who on Earth is the idiot that thought doing an airdrop like this. I didn't know anything about JUNO before your article. The first impressions are very negative. How can I trust a project for long term that cannot even deal with a Sybil attack. Imagine a HIVE project doing an airdrop like JUNO! I cannot even think any important project here would take such an approach.

JUNO's approach completely relies on either unicorns and rainbows or centralized mobs. Neither are good ideas. I wish these people will learn from their mistakes. Even Ethereum wasn't stupid enough revert the transactions. They simply forked.
!PIZZA
!LUV

LUV in the dark? The confirmation-reply may soon be turned off. This would be to conserve and replenish Resource Credits. Even while operating in the dark, your LUV command will still go through as usual. You can always monitor LUV in your wallet, at explorer A or at explorer B, or best, in real time at the luv-log channel on Discord.

How can I trust a project for long term that cannot even deal with a Sybil attack.

The answer is you can't and as a result, the token becomes worthless.