The difference between EOS and EOSIO

@forexbrokr 74
about 1 year ago
LeoFinance 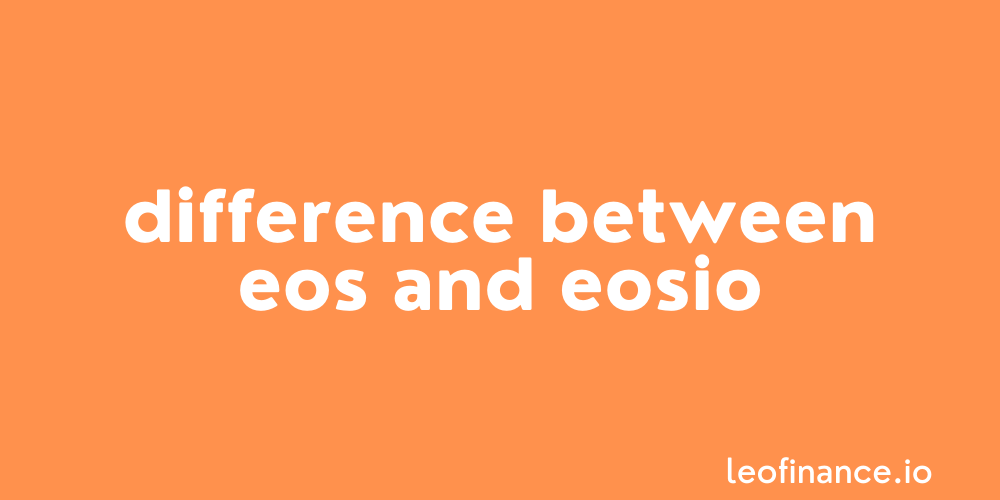 We outline the difference between EOS the cryptocurrency and EOSIO the open-source operating system.

EOS and EOSIO, though somewhat confusing are entirely 2 distinct entities that can not work without each other.

A clear differentiation needs to be made, with the difference ultimately boiling down to their functionality.

While one serves as an operating system, the other serves as a currency for transactions and storage of value on the chain.

This section of our EOS guide compares the difference between EOS the cryptocurrency and EOSIO the open-source operating system.

EOS is the main blockchain and cryptocurrency deployed using the EOSIO operating system.

While it might seem alone in its category, it is actually one of 12 other deployed public and private chains.

EOS utilises a DPOS consensus, with 21 major block producers in a group of 30 producers.

Using this consensus mechanism, the EOS community is able to run its activities solo.

Although Block.one controls EOSIO and has the majority of tokens on the EOS blockchain.

EOS has certain features as stated on their contract permitting the blockchain to create several accounts under one account.

Each user is also permitted under the contract to have 2 permissions:

These are somewhat similar to the Active and Owner keys we have on the Hive Blockchain.

The 21 block producers are permitted to have all transaction fees waved and are paid yearly through a 1% inflation of the token that's shared among them.

The other blockchains built using EOSIO have similar but somewhat different features.

EOSIO is the operating system behind EOS and other associated blockchains.

It creates an avenue for blockchains to be created and easily customisable on the terms of the blockchain community and system contract.

The different blockchains may have their issues, however, these issues may not in hindsight be connected to EOSIO in any way.

There are major characteristics that all blockchains built on the EOSIO operating system possess.

All blockchains created on the EOSIO OS, including EOS itself, share the above characteristics.

Final thoughts on EOS and EOSIO

EOSIO is currently owned and maintained by Block.one.

It possesses system contracts that permit the creation of blockchains with different use cases and EOS is one of those blockchains created on the system.

EOS is also one of the first blockchains created from the first version of EOSIO which means it has some unique properties and at this point, is highly customised by its users.

Other public blockchains built on EOSIO are:

The other blockchains built on EOSIO are private, therefore their details are undisclosed.

Ultimately, anyone can deploy their blockchain community on the EOSIO operating system.

Why not share a chart or leave a comment on the difference between EOS and EOSIO. All comments that add something to the discussion will be upvoted.

This EOS blog is exclusive to leofinance.io.

Ah I didn't understand the difference. This makes sense and now I understand how WAX was built off EOS.

WAX is probably the most prominent example of an EOSIO blockchain having success.

What they're doing in terms of NFTs is awesome.

Something EOS itself can only dream of at this point.