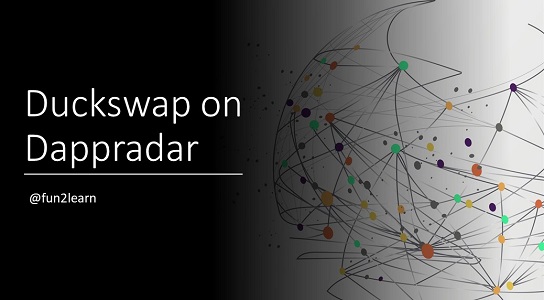 Duckswap has just been listed on Dappradar. It was a great news for the Duckswap community to gather more trust in the project as the development team is seeking ways to promote its project.
https://dappradar.com/binance-smart-chain/defi/duckswap

With many BSC farms that appeared for a short period and disappeared within days, many who had lost money would naturally become skeptical.

Before the news of being listed on Dappradar, its price was below $0.20 but it has stabilised and went over it with the current price of $0.27 at the point of my post as many are afraid of losing out in profit if Duck token ever suddenly pumped specially its Matic Yield Farming is almost ready.

Few days ago, I wrote a post to share that the team is working on migrating the token on a Matic-based Duckswap farm. It would allow cross-blockchain functionality between BSC and Matic.

The Duckswap farming on BSC will continue while Matic Quack token would be available for farming using Duck tokens that were obtained from its BSC farms.

There was definitely a delay in its release and the founder has just announced that its Matic farm is ready for release but its Dex is under development.

The community was asked to vote whether we should release Duckswap Matic Farm with the farming first while the Dex is still under development by using Quickswap exchange for the time being.

As Duckswap wanted to become Pancakeswap on Matic network so getting its Dex in place is important but building trust that it is a genuine project by rolling out its Matic farm first is also crucial.

Currently, the community seems to support the delay of the Matic Farm so that both Farming and Dex can be rolled out together rather than using Quickswap exchange as an alternative.

This news was enough to make its community excited actually but I think the voting has not ended yet and still in progress.

In the telegram Duckswap community, the founder has always asked the community to make vote in different decisions like the change in the percentage of yield farming and the reduction of production of New Duck token to prevent excess production leading to price drop.

As a young project, it certainly has high potential after its release of the Matic farm but it is certainly still a risk.

Some of the things that the Developer Team had done to raise the trust of investors.

Those who are interested in duckswap can investigate on your own as well as join its telegram that is listed on its website like other BSC farms.
https://duckswap.finance/nests

One has to evaluate on our own as well as the level of risk that we can afford to take.

Investing in Duckswap is still a risk as no one can predict the future but it seems to be legit at this current moment. One should make his own judgement and not be influenced by others.

We should never invest in money that we cannot afford to lose regardless of how attractive the reward may be.

Disclaimer: This is my personal reflection and I am not in any position to instruct anyone what they should do. I am not responsible for any action taken as a result of this post. My post can only be a reference for your further research and growth. By reading this post, you acknowledge and accept that.