What A Brawl! - PIZZAs hit First Place Again and Everybody Goes Wild

@funnel 66
about 2 months ago
LeoFinance

and that was it!
one more @splinterlands Brawl is over!
what a thrill!!!....you may ask yourself what is this guy saying now but believe me this specific Brawl had nothing to do with the ones that i've been part of, till this day!!

i'm talking about the excitement ...the stress...the anxiety...the fear...the responsibility and last the relief, the pride!!!
yeap! all these sentiments caused by a Splinterlands Brawl!!!
but let's take things from the start..

i belong to the PIZZA guild.... PIZZA - The Stuffed Crust
for those don't know PIZZA is a great community ,with its internal token, the PIZZA token
you can also visit the official website https://hive.pizza/ for more information 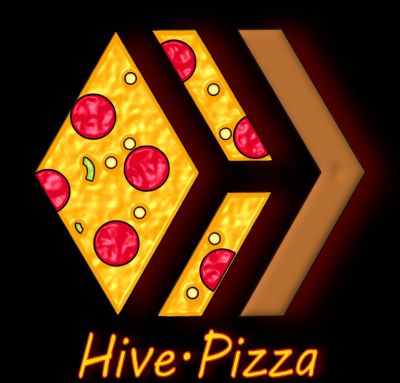 ..so like every Brawl , the PIZZAs were ready to throw themselves into battle
this Brawl though had the bad luck to clash with the Splinterlands Season Ending ,and i say bad luck cause for me this is how it turned out to be

i had leased out most of my cards,i had my season ended one whole day before
i hit GOLD 1 league and 30 reward chests, i was happy with this so i stopped battling
i figured out, it is time to rent my deck ..so all my valuable cards were on market for rent
and this was a major mistake, a huge mistake which cost me my good performance in Brawl

most of the times i finish my fights with a score of 1 or 2 losses maximum,i have my flawless victories of course but most of the times i suffer at least one loss
this time i had a horrible challenge
i had to play in a Bronze level Fray with totally rubbish cards, the ones that had been left over from renting
the feeling was terrible and i was really embarrassed cause i knew my guild was expecting and counting on my performance for the final result
the load on my shoulders was heavy and i was feeling that i was holding the fate of this Brawl in my hands
MY PROBLEM was i had no decent cards to play with!!!!
my co-fighter @kennysgaminglife was tagging me in our discord server to remind me that i have to enter my battles, the clock was tickin and there was not so much time left for the Brawl to finish

by the time i was online and ready to start submitting my battles my Guild was in second place, 2 wins away from first place and with all battles already submitted by my co-fighters
the time left was 1 hour and 10 minutes
i was extremely upset with me ( swearing at me for renting my cards and not be able to help my guys )
i had to let Kenny know what was going on so i send him a message on Discord DM

i said to myself ''now you f#cken c#nt lets see what you made of, now we put your name to the test,go to a gunfight with bare hands and try to survive to learn your lesson''
i took a deep breath and throw myself into the arena
first match...win
second match ...win
third match...win by FLED
i was flying!...i never expected to have 3 wins in row with this deck...i had put my rubbish to fight and they were kicking some asses
my joy was not meant to last for much longer as i had to suffer 3 losses in a row as well
i was getting really anxious, stress was taking over me
my rate was 3-3 and i had been left with 2 more entries 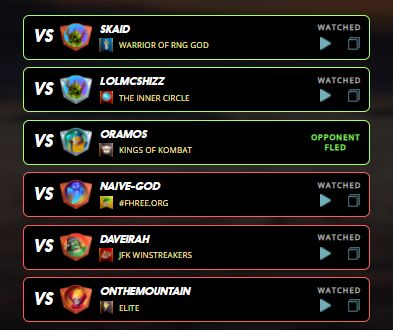 i entered my sixth battle and it was victorious!
' catch your breath funnel, one more to go'
after my 4th victory i went to check the results as a guild...where we standing?
big mistake!
the horror continued, the pressure now was even bigger
our guild had moved to first place! but it was not a clear lead
we were in first place but we had the same score with the second guild
i was feeling the hot breath of FHREE.ORG (rival guild) next to me
i sent a message to Kenny again 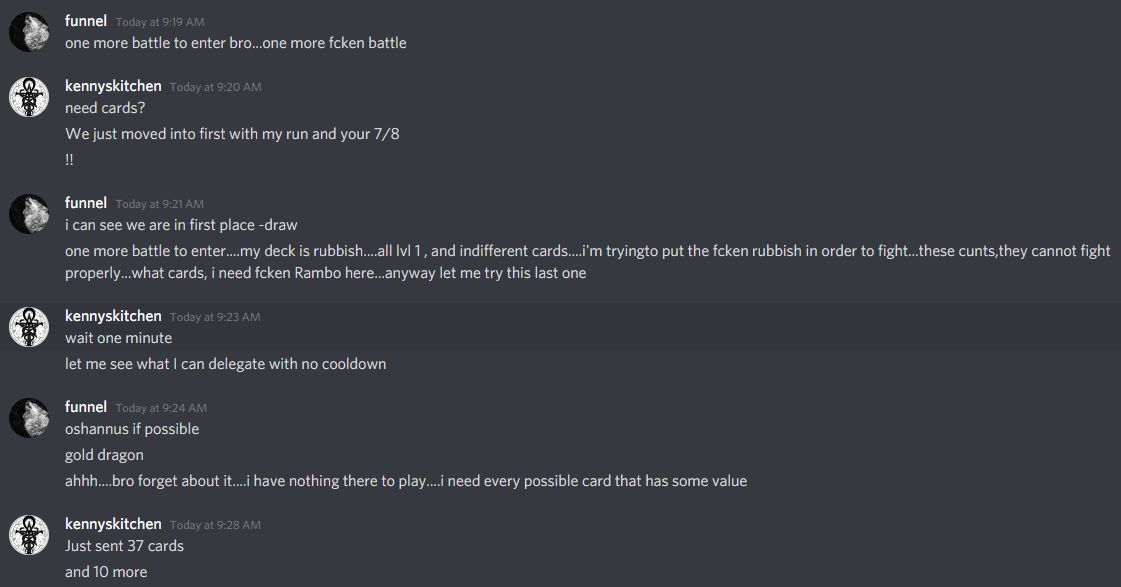 this is what companionship is all about, my co-fighter was there to support me, to do whatever he could in order to help me in this difficult situation
he went down on his deck and delegated 59 cards to my account
i was the one battling but he was battling with me sharing my load

i entered the last battle....i didn't use any of the cards kenny delegated to me but this is irrelevant
his action was so important cause he gave me the push i needed , i felt more confident with the delegated cards on my hands,i felt more confident with my friend next to me
thank you @kennysgaminglife
20 minutes before the Brawl was over and the battle started
YES!...it was a victory!!
i won the god damned last battle the one that was about to give the guild a clean first place just in time, minutes before everything was over...
what a thrill!!!
i immediately text to Kenny 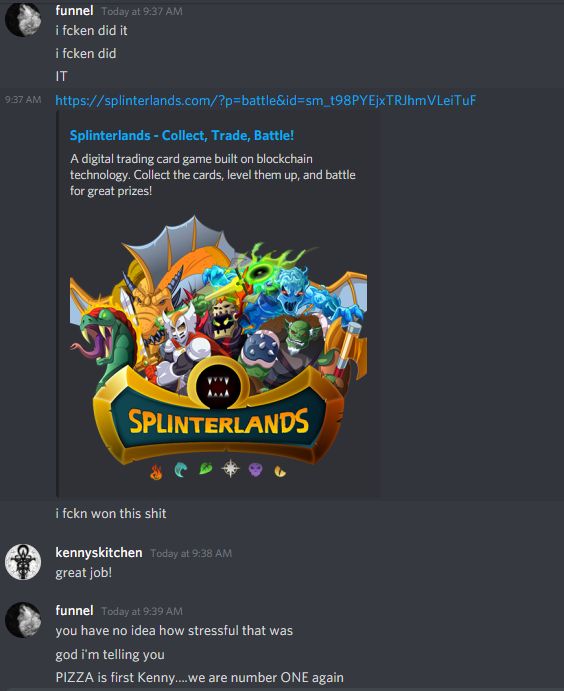 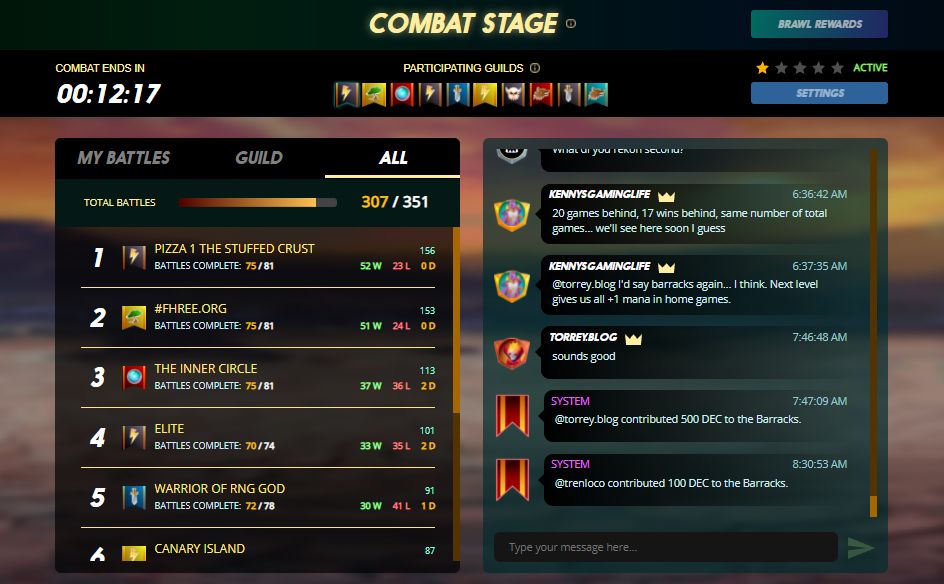 everything was over!
the PIZZAs won one more Brawl and 1831 Merits was everybody's payment plus 34 Crowns for our Guild
i'm proud of my comrades
@pjlg
@mcgilli
@torrey.blog
@kuzuri27
@trenloco
@kennysgaminglife

these are the dudes who deserve to congratulate ,cause these are the ones that brought the victories needed for the win 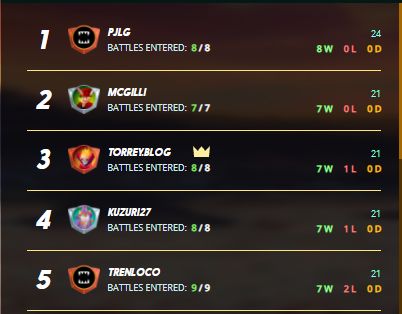 i'm happy about me cause i didn't embarrass my people with my mistake
i'm happy i was not the one to destroy all their efforts to success
i blame myself for this 5-3 performance, there is no excuse for this mess
thank god it didn't cost us the first place i would never forgive myself

as you understand i take too seriously this Brawl thing
well, what can i say
this is Splinterlands, this is PIZZA-the Stuffed Crust Guild
let's go guys!!!
GO FIRST....or GO REST !!

Loved the read Funnel! Glad to be on your pizza team! 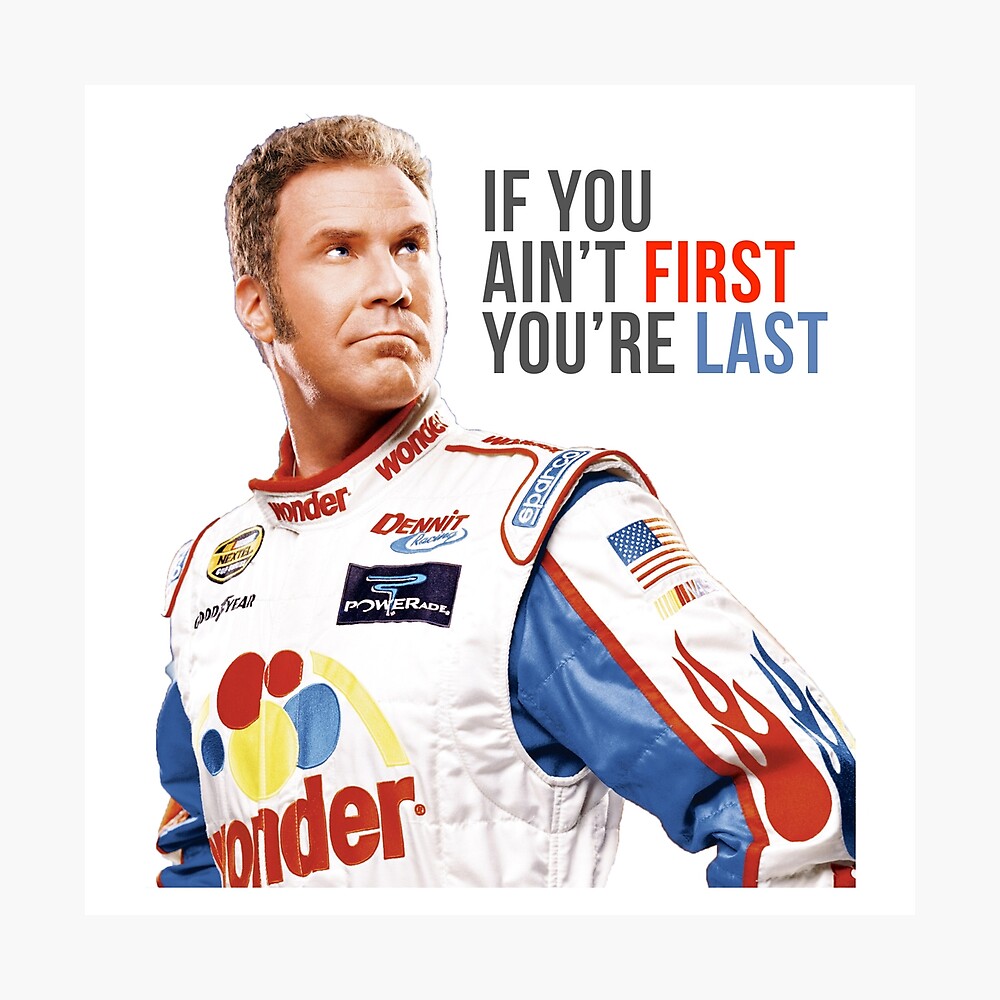 love your meme bro...you are a fighter with skills, i'm happy we are in the same side