My weekly Hive goals post from yesterday started with the title "20k HIVE Power by the end of September?".

From the HP level recorded yesterday, 1000 HP was needed to go over the threshold. I obviously wasn't going to do it without buying HIVE, and I was well aware of that.

As @jfang003 remarked in a comment, that would require 500 HIVE per week. And that was pretty much compared to my previous power-ups of HIVE this year.

But as I already knew, it wasn't impossible. It is just a matter of how many funds I spend for the HIVE I need/want.

Also yesterday, I said this:

Only to have HIVE down by over 11% at some point today. 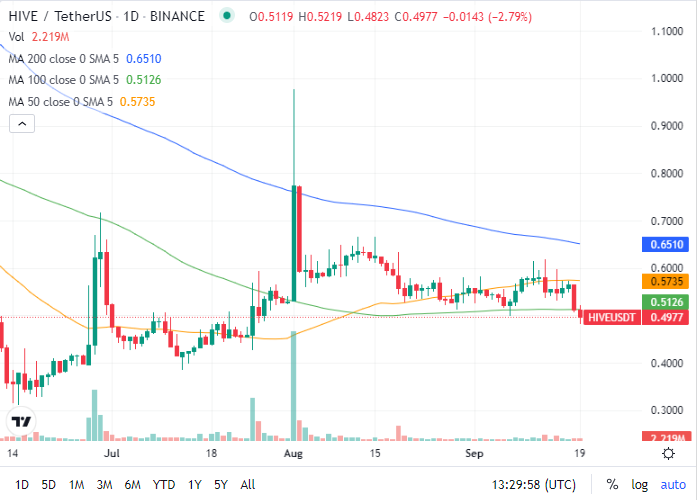 Now, 50 cents isn't exactly the price point I had in mind only a few months ago where I would buy more heavily. But that seemed a pretty good price today. It's been more than a month since the price of HIVE hung onto the 55 cents level.

To be honest, I don't know if this is a signal of returning to a closer sync with the broader crypto market or if it was a short dip, and HIVE will continue its sideways movement.

I am prepared for both situations. If HIVE drops further, I have more stablecoins to buy more of them. If that was a short dip, I am glad I didn't just buy a little bit this time and assured in advance that my HP mini-goal for September is reached:

This means I purchased and powered up at least 1000 HP today:

The waiting game hasn't brought me much satisfaction this year in areas where I focused upon. Sometimes when things go in the direction you want to, it's better to just act and stop waiting for better deals. You might never get them. And what's worse, you will probably get worse deals in the end.

I have to say, that regardless of where HIVE's price goes from here, I'm pleased by what I accomplished today. 5 more grand to reach my HP goal this year!

I have begun setting some orders starting at $0.40. I don't believe the bloodbath is over, so hopefully, my orders will trigger. I will be setting some a bit lower as well.

I won't mind if the price moves to lower levels. But I stopped expecting that.

Great work. It would be ideal if we could test that sub 0,4 again!! We missed out big time there..

Yeah, so did I. So hard to anticipate how things will play out with the economy having an active role in influencing the crypto trends.

Yes exactly. Im no longer expecting super low prices, but if they come, I try and scramble some cash together.

I call it dreams come true! Or the magic of our goals...
Anyway, I'm glad you closed that gestalt!
I'm not expecting a lower price either, but I'll be happy to repurchase if it drops. I think that's why we hold the price even when everyone else is dropping....
!PIZZA

As a friend of mine said once, in the long term the difference between 30c and 50c may become irrelevant.

Congratulations on your achievement.

Great analysis. Thanks for all the great information in your post.

More of sharing my own reflections at the time. I wouldn't raise it to the level of analysis. :)

I sometimes celebrate before reaching a goal (it happens often in Splinterlands). And that often leads to me losing my focus and not reaching the goal (as soon as I could have). So I'm not going to celebrate more than I achieved so far. ;)

Only to have HIVE down by over 11% at some point today.

But in the grand scheme of things, anything sub $1 is going to be cheap.

Congrats on hitting your goal!

But in the grand scheme of things, anything sub $1 is going to be cheap.

Definitely. We are going to think in multiples someday.

Hi, @gadrian. Thanks for your information.
You are doing a good job!
Have a nice day and evening.
I am always learning something from your posts.
Barb :)
#thriveonhive

Thanks, Barb! In a way, I'm publicly journaling (part of) my journey.

Congratulations. I wasn't expecting Hive price to drop but you still managed to hit your goal so it works out.

Me neither, that's why I acted on the spot. You never know what tomorrow brings.

@gadrian! Your Content Is Awesome so I just sent 1 $BBH (Bitcoin Backed Hive) to your account on behalf of @bradleyarrow. (4/50)

@gadrian! Your Content Is Awesome so I just sent 1 $BBH (Bitcoin Backed Hive) to your account on behalf of @bradleyarrow. (6/50)

I agree with your thinking, Adrian.
I agree that we will not see another significant dip, but if we do, I will just buy more.

Sounds like a good plan. I'm applying it too, so we'll see where this leads.

That's taking some decisive action to reach your goal. Congratulations, @gadrian. I keep toying with doing the same to get to Dolphin status and then I remind myself that I will get there soon enough without going what for me would be crazy. LOL
!ALIVE
!CTP

Not decisive yet, but it is a big jump forward that was needed to solidify my confidence about reaching this goal by the year-end.

I have a good sense you will get there! Enjoy your day, @gadrian!
!CTP

Thanks for the vote of confidence. Have a great day!

You're welcome, @gadrian! Enjoy your day! 😀