With less than 5 days till the vouchers start to be distributed, I can say with a high degree of confidence that I made up my mind regarding the strategy I'll use for the Chaos Legion presale.

Less than a week ago, I still had more than one scenario I pondered in my mind.

Even then I leaned towards the strategy I have decided to use, but since then I became aware of a piece of information which has a big influence in my decision.

During last week's AMA, I learned that packs bought during the presale have an immediate impact on the airdrop points. Which means that if you buy packs during the presale, you will have a bigger share of the daily SPS airdrop, starting with your purchase going forward.

That automatically adds another bonus to the presale packs, compared to those purchased afterwards.

Couple that with the uncertainty surrounding the process immediately after the presale, that's a strong incentive to buy during the presale. By uncertainty I mean how exactly will the process work afterwards (possibly for months, I wonder?). That hasn't yet been decided, said the founders during the AMA, but they said more than once it's unlikely the packs will be available without restrictions at first, to avoid massive purchases from whales.

We could look at a few months of presale packs bonus for the airdrop before mass purchases (another month at least, in my opinion, post presale, or something gradual), and that's not something to disconsider.

So, my strategy will be pretty simple:

Why I kept accumulating DEC also? For several reasons:

That's it. That's the grand strategy!

In the end, let's have a look at the demand for VOUCHERS, even before they started to be distributed: 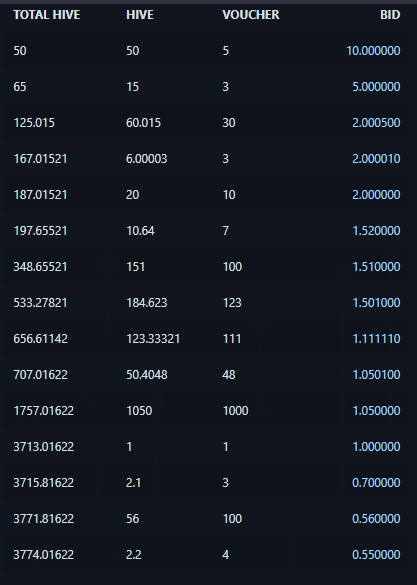 Already 3.7k Hive of bids starting to go exponentially. I assume this will keep growing, both in price and in volume. But that's only an assumption.

Well, now that my strategy is all set, I can relax, lol! What do you plan to do, if it's not highly classified?

I am thankful if I get one Voucher after 3 days. Sad life :-)

Everyone has to start from somewhere. I started 3 years ago and consistently played and invested in the game, so I now there's some ROI now.

But there are other games where I'm at the beginning and others are way ahead of me. I just do my thing and will slowly grow.

I'm thinking about doing the same, but of course, I have less staked SPS and fewer VOUCHERs... Somehow, I'm still not convinced to go shopping for packs when the pre-sale starts... It's fine that they will count for the future airdrops, but I doubt that they will have a bigger "value" (inside the airdrop panel), than for example, the Untamed packs...
On the other side, if the FOMO turns into GIGA-FOMO, the price of CL packs can easily hit $40-50 (all together with the price of VOUCHERs)... But, let us wait and see... ;)

It's fine that they will count for the future airdrops, but I doubt that they will have a bigger "value" (inside the airdrop panel), than for example, the Untamed packs...

I believe they might have the same airdrop points value assigned to them as previous sets. On the SPS management page it says "card packs", without referring to any particular set, alpha, beta, untamed or promo ones. So, while the DEC burning value is different, the airdrop point value of the pack might be the same.

But that's a point that needs some clarifying, I guess. Thanks for bringing it up!

I'm still not convinced enough to buy new packs... lol... But, as you said, if the price is right, why not... ;)
On the other side, I will continue with accumulating DEC and try in that way to push up my airdrop numbers (or better said, keep them in balance... lol)...

@misterengagement 57
13 days ago
There has already been too much ENGAGE today.
0
0
0.000
Reply
Menu
Explore
Trade
Trade CTP