On May 1st or maybe a day before I saw a notification from the Crypto.com app on my phone.

I receive enough notifications from them, including for high price variations of my favorite tokens.

Both of which are benefits associated with my Royal Indigo card.

Well, guess what? Both of them are taking a hit for long-term sustainability reasons. Looks like another aggressive marketing campaign scaling down. Not saying I wasn't expecting it. 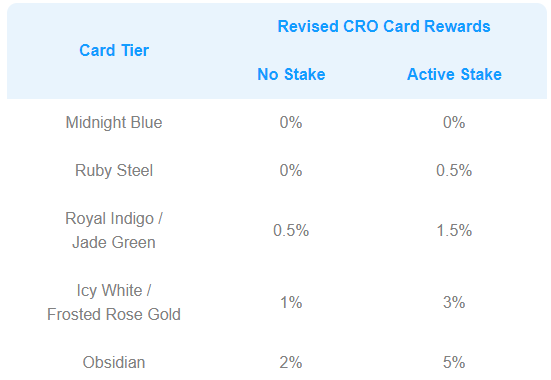 Screenshot from their email.

Here's how they look now before the changes are in effect.

That's quite a slashing! And it's not all.

Not only did the CRO rewards get slashed, but now there is a monthly cap on them for Ruby Steel and Royal Indigo / Jade Green.

Screenshot from their email.

Ok, this doesn't bother me much. In a normal month, I don't think I reach that cap. And I'm sure there was plenty of abuse of these CRO rewards. Someone could even buy a car or something expensive within a 25k USD limit and receive a percentage back as CRO rewards.

The intention stated in their initial email was to phase out (i.e. remove) these staking rewards entirely.

After protests (I assume), and a crash in the price of CRO, they came back with an updated version, where some staking rewards are still paid, but not as high.

After adding all the screenshots from emails in this post, I found a link to a blog post published on their website, where you can consult full details.

I have to say it didn't take me by surprise. Maybe the extent of the reductions. But otherwise, the level of CRO rewards they offered on purchases was much higher than the competition, as far as I know.

It's interesting they make such a big case about the 10% staking rewards (for mid-higher tier cards nonetheless) when the APR for CRO/OSMO is above 60% on Osmosis. True, that is paid in OSMO, not in CRO, but one can swap OSMO to CRO if desired. And the APR is still 60%+.

Well, the good part is there isn't much more room to cut, competition is waiting and it's hungrier than they are.

There will be tons of such cards in the future.

I know. There are alternatives already.

It will be a race to the bottom. LOL

I never got involved because I like strict cash back on my card but I thought it was a fun gimmick. I assumed they would reduce their rewards eventually. I am pretty happy with savings rewards for HBD now. Way better than staking a token I don't really understand.

Yeah, I don't really stake CRO either, apart from what I needed for Royal Indigo, in much better conditions than one has these days. I use the staking rewards and the CRO rewards from purchases to top up my card and make purchases with them.

I suppose they will become a lot more mainstream in the future. Crypto isn't going away and credit card companies will try anything as long as we don't pay off our balances lol

It is something that is an eye opener for all. We need to be mindful of third party applications.

This is a bad situation but not totally surprising.

Yes indeed. I saw it coming, but maybe not that drastically. Anyway, I took advantage of the high rewards while they lasted, first with the 2nd tier and 2% back on purchases, and since the beginning of the year with 3% CRO rewards + staking rewards. And I'll continue using it, because it's very convenient, even if the rewards will be lower.

Don’t have such a card, but there will definitely come competition to the market with bigger rewards. That’s a certainty

They do have other rewards besides what I mentioned. For example, I could get full reimbursement on the Spotify and/or Netflix subscriptions, but I don't take advantage of that because I don't want either of them. Higher tiers have even more benefits.

There are already alternatives, and others will come to the market. Coinbase has a VISA card? Hmm, I just checked... Not available in my country yet.

The problem with these cards is many of them require holding and staking their own coins. Which is an issue. You can only focus on one. Or use alternatives that don't require any staking of their own coins.

The coinbase card isn't available yet where you're at?

I know of the blockfi, gemini, and bitcoin rewards cards but I also know that strike.fi is a good alternative if you can get payments direct deposit in btc.

Yeah, I'm on the waiting list for the card of blockfi forever, but with their regulatory issues and their headquarters in a crypto unfriendly state, I'm not putting much hope in that option.

I'll have to take a look at the other options when I have time.

good luck with it!

I had the crypto.com card explained to me once, but I never jumped in. Something about CRO tokens and stake and percentages back in tokens... something like that. It seemed a little confusing and risky. Hopefully something better will come along, now that the rates have gone down.

Very few options exist that don't require staking of their own token. And they offer very low rewards.

I am displeased by these reductions, but they were kind of unavoidable at some point. Overall I had a great experience using their cards and I'll continue using them until something much better comes along. After all, my current card expires in 2027 and I can still make enough rewards off of it.

hmm, many ways to view this. Every little bit helps or.. not worth it. I guess it depends how you use it.

That is true. There is a balance in everything.

I could care less about the staking rewards because well...I don't stake a lot of CRO these days lol

But damn....That 1% back I was getting for using my debit card HURTS. What a horrible example of how NOT to listen to your community. I really hope they rethink their approach to it.

Yeah, it sucks. I'm actually pretty pleased with the staking strategy I had. Staking levels are calculated in fiat, and I staked CRO for my current card tier when CRO was at its peak value in USD terms. Now I couldn't care less about how the market evolves, as the card tier remains locked in.

Yeah, I don't really have a great feeling about this.
I might just keep an eye on it and maybe not move too much
of my money there. It won't be the first time the cards
just get pulled one day to the next.
It happened to me with 4 different cards on New Year's eve
2017 or 2018 (not sure). Not so nice!
And then there was another card that was scrapped last year,
and things pulled to Binance. But the Binance card, I can't get
it to work somehow. So crypto.com is the only one I have atm.
So I'm hoping for a better alternative.

Yeah, it's the only one tied to the crypto world I have too. Physical one I mean, because otherwise I have I think two more in the virtual realm.

They're a centralised company and can do what they want.

Good luck to them and their owners ;)

They want to cut down costs now that they got their milestone in users. I wonder if they are losing money on offering the staking rewards and if they were eating the costs to gain more users.

I am pretty sure that was the case. An aggressive marketing/subsidizing campaign to finance their huge initial growth.

It is disappointing. And, Crypto.com's stunt resulted in CRO crashing, which caused my DeFi loan to get partially liquidated.

I was really into CRO for a time. I was loving 3% cash back on purchases. However, recently, I have been getting better cash back from credit cards, which some pay in actual cash back. It has been my way of making up for wages lost to inflation.

Despite the changes, I still like Cronos. With Crypto.com, it is a good onramp to Cosmos. I wish there were a Hive bridge to Cosmos.

Sorry to hear about the partial loan liquidation when CRO crashed.

What I loved (and still do) about crypto.com's card options compared to others, is that it offers the CRO rewards for almost any type of purchase, with a short list of things not included, the most important ones being utility bills (except internet) and gas.

Yes, since I'm also involved on Cosmos, I also appreciate that link they have, which is very important. About a Hive bridge to Cosmos, maybe it'll come someday, but we'll have to take them one by one.

That's pretty crappy. I guess that is what you get with a centralized company like that. I have been waiting to get a Crypto.com card, but now I think I won't even bother. I might just as well pull out all of my funds when the price of CRO pumps again.

Yes it is. Unfortunately, I don't think we'll see a decentralized solution that is widely accepted for issuing/managing cards any time soon.

Sorry, your rewards got cut. This is a topic which I have absolutely no knowledge. Thanks for sharing.

Guess that s what you get for spending too much on commercials and sponsorship ..... on top of that CRO dropped painfully hard last week

The reason for the drop is this announcement from them. Some whales probably got upset, for good reason.

Two weeks ago after I joined crypto.com, I was about to transfer money so that I could buy cro. However I didn't manage to log into coinbase and then I forgot about it. Fortunately I didn't buy Cro then lol.