Do You Play Splinterlands? This Is Important to Know!

I touched on this subject in my weekly Hive goals update from Sunday, but I think this is too big to leave it like that.

I said in the title it is about Splinterlands because that's the biggest ecosystem that may be influenced.

But really, any game on Hive will be impacted as well. Hive-Engine and DLUX too. And any other application that uses custom jsons.

You have no idea what these custom jsons are? They are transactions containing text in a special format, used by applications to keep relevant information for themselves on the first layer (like in a normal database, only decentralized and public), but they are used on the second layer or centralized. They are not processed by the blockchain. They look like this: 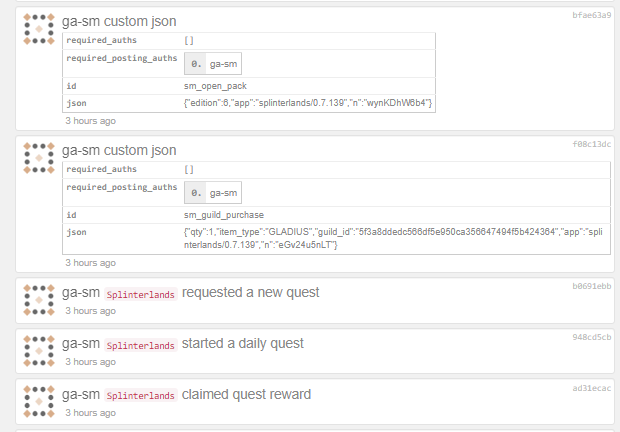 All transactions you see in the image above are custom jsons:

Then Hive-Engine. While this isn't a big exchange, taking all tokens combined and all activity, that definitely amounts to another decent number of transactions.

If we add the other games and DLUX to the mix, that's another slice.

What do all these things have in common? They all use custom jsons.

Well, custom jsons are currently very cheap operations in terms of their RC cost. Cheaper than votes and financial transactions, most likely, although I haven't tested that.

Obviously being cheap is not the problem. But their cost will increase after HF26.

From what Blocktrades said answering a question, there is one costly operation that wasn't taken into account when RC costs were initially established: signature checking. What is that? Checking whether or not a transaction is broadcast with valid credentials to be applied to an account.

From HF26 onward, this cost will be measured as well. And being an operation that is quite costly, it will impact to a higher degree the cheaper transactions, like custom jsons. But I assume in the same category are the votes and financial transactions, also cheap transactions, just not as utilized as custom jsons (especially the latter).

What does this mean?

For instance, it might mean that given the same pattern of using Splinterlands as today, more RCs might be required after the hard fork to pay for that activity. That's especially true for small accounts, for example, those specially created to rent cards out.

The good news: you won't have to delegate HP to those accounts, you can delegate only resource credits and use HP on accounts from where you curate and vote for governance.

I have found having actual hive powered up , works better than delegated hive. Not sure why that is though

I have found having actual hive powered up , works better than delegated hive.

In what way? They should be identical. Actually, if the vested amount is identical they are identical. Otherwise, there can be fluctuations.

Using for rental service. It seems to work better.

If you are talking about Splex, they recently optimized their RC usage in their algorithms. Maybe that's why you noticed the difference.

That could be it then, was a co-incidence that it happened at the same time! lol

Wow, didn't know this. thanks for sharing

I actually observed that custom JSON cost less RC. I was trying out Splinterlands API back then where I only have around 20 HP.
This important not only to players but to developers who wants to experiment on custom JSON.

Interesting info. I was not aware of the increased RC requirement for json operations after hf. Thanks
!PGM
!CTP

That will probably have a significant impact, since the majority of transactions are custom jsons.

Thanks for the sharing with the community. Didn't knew custom jsons does not consume as much RC.

Individually, they don't, but they are MANY. Added, they can consume pretty much.

How much will the increase be?

How much will the increase be?

I don't think anyone knows until it becomes active and the blockchain starts rebalancing and recalculating costs.

Depends on the volume of transactions. I said small account because for a redfish a few transactions more (or costing more) is a big deal. But if an account is RC-intensive, size is relative.

Thanks for the great information. As always it is very helpful. Thanks for sharing.

Thanks for the info. I didn't understand what the custom json's were.

I hope it's clearer now.

The good news: you won't have to delegate HP to those accounts, you can delegate only resource credits and use HP on accounts from where you curate and vote for governance.

Keen to see how this plays out in practice.

Will it mean that new accounts won't ever buy HIVE and power it up because they don't have to?

Could be fixing one problem, but creating another?

Only time will tell.

Will it mean that new accounts won't ever buy HIVE and power it up because they don't have to?

Could be fixing one problem, but creating another?

You are right, they might not buy HP at all. And I don't see a problem with that. Someone will provide them with the RCs (often for a cost), and those will buy HP. And if they want any voting power or say in the governance, they need HP.

In Splinterlands, one can earn without owning any asset (besides the spellbook). Just by renting cards from those who own them. And yet, people buy cards, many of them for renting purposes, because they can't possibly play with all of them (those who buy thousands of packs). I believe that's what will happen with RCs too. Owners will rent their RCs and make more income passively.

Well, I just have to link the article that describes RC changes in detail. For most people reading Summary or just TL:DR section at the end should be enough :o)

Very interesting article (although I haven't read it entirely yet). I didn't know about the resource popularity share and how it affects the cost of transactions. That article doesn't speak however about the changes that will come after hard fork 26 in the cost of RCs (as far as I could tell without reading it all), but still very interesting for understanding the RC cost dynamic of transactions.

All the article does is compare old RC version with new. Resource popularity share is one of new mechanisms introduced in HF26-ready code.

One of misconceptions about RC is that the changes will trigger with HF26 - they won't. When you set up HF26-ready node, it will already compute RC with new rules not only for new blocks before HF26 but for all past blocks retroactively. It is as if those rules were there from the start and old rules were never there. It is easier (and computationally cheaper) to code that way, but it is only possible because RC is nonconsensus (node will not drop past transaction due to lack of RC) and even if it turned out that user's past actions would put them into negative RC using new rules, they won't go more that two hours worth of regen into negative. As a result, as we approach HF26 and more HF26-ready nodes join the network, old and new nodes might disagree on amount of RC people have. Some transactions might be accepted and broadcast only by old nodes, some only by new ones. But when transaction reaches the block, even if nodes disagree, they will still let it through. What changes when HF26 is triggered is that all nodes will have to be HF26-ready and use new rules, therefore all will agree on how much RC people have.

I was just reading through the article linked and realized you were describing the changes that have been implemented to RCs lately. Thanks for the further explanation on how there might be RCs levels disagreement between nodes depending on the version of the software they'll run close to HF26.

Oh, I didn't realize that the price for each action will go up. I won't run into any issues but it's nice to know if I see anyone talking about it after the next hard fork.

This is mostly an... opportunity, in my case at least. To have more HP. And be ready to fund my accounts that need RCs with RC delegations and withdraw their HP delegations.

Oh, I finally heard a simple explanation of custom json).

Yeah, I heard that news at HiveFest too, at first I thought it made sense. It really is! My only fear now is for the newbies. I remember my brain tearing up from years of trying to figure out what HP, Hive and HBD are... But maybe now going into crypto is not the worst thing. !LOLZ


How does a tiger find his favorite song on Apple Music?
He uses their algrrrythm
Credit: reddit
@gadrian, I sent you an $LOLZ on behalf of @stdd

To be honest, most people don't need to understand what custom JSONs are. It's like asking a car driver to understand something about the inner workings of the engine (sort of). They'll just see that the gasoline (i.e. RCs) price will go up. Now, if they have a gas station in their backyard, they might not be very worried. They will also sell gas to others. But those without gas won't probably like it as much.

Yes, that's exactly what I was thinking...
!CTP

Interesting stuff. Do we know yet how much impact this will have compared to current usage?

A simple but not very accurate answer would be 50-70% more RCs needed for custom jsons. For exact details check out the post linked in the comment by @ andablackwidow at the top.