I'm sure you are familiar with this image about human evolution: 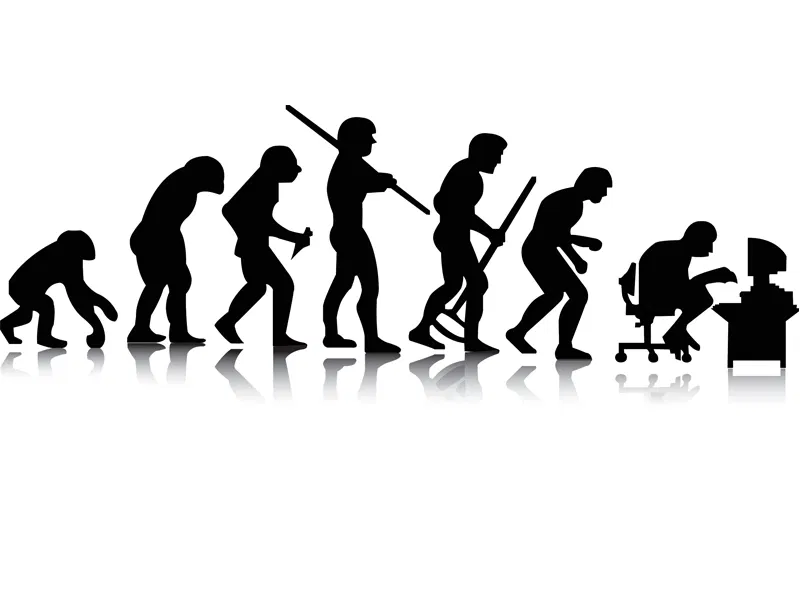 We can't say there's isn't some truth to it, or we'd be lying to ourselves.

The above image is depicting changes in aspect and posture. When humans were both hunters and hunted, it was absolutely essential for their existence to be physically fit and able to hunt or run from predators.

Later on, when they became farmers, they settled down. There was less fear for their lives from wild animals and, working as a farmer, while it is physically demanding at times, it is less challenging than being a hunter at the beginnings of human kind.

The industrial age meant even less physical challenges for most humans. And lately, as we entered the ages of computerization and digitization, hard physical labor is almost non-existent at a large scale.

So, the image above shows a direct correlation between the level of physical activity and our posture.

What the same image doesn't depict is the inverse correlation to posture for using our brain instead of the physical strength between the early ages and nowadays.

Humans are physically fragile. So, as we advanced into the computerization age, robots started to replace them, with increasingly higher productivity.

If all was needed was repetitive physical actions, that job is almost surely performed by a robot these days.

What still represents a partial mystery is our brain and how it works.

But AI increasingly becomes better at performing specific tasks, to the point where even now it surpasses the human champions in certain fields.

Will AI develop further to be able to use several targeted processes and integrate them into complex behavior in a way that will outperform our brain? That is most likely, given the rate at which it develops.

I believe AI will be specialized and cannot re-specialize, nor there's a need for that. Because if a specialization is no longer needed, a new AI for the required specialization will be created.

I wonder if our brain's capacity to learn something new in a field we know nothing about is something that will give us an edge in the next period of AI-generated job disruptions.

Or simply in every field we'll turn, there will be a specialized AI which will do the job better than we can do it, much like robots do all the physical labor and assembling in factories now.

Personally, I believe traditional jobs are doomed, but we still don't really know how the jobs of the future will look like.

This is much like trying to walk through a large room filled with people relying on sight, when the power goes off. At some point the lights will turn on and we'll see. At first we might only see a few distant phone flashlights, but it's better than dark. Until then we'll have to be careful where we put the next step.

Yep, but you don't physically run from stress. When it's too much it hurts us much more than a wild animal. It kills us little by little.