Keeping Peg is Difficult for HBD While Bitcoin Crashes

After 24 hours of almost nightmare for UST as a stablecoin, reaching as low as 0.67 USD according to coingecho, one can be tempted to think defensively for HBD as well.

HBD was affected too, going down to as low as 0.90 USD during the same 24 hours and the same source.

During the same interval, the popular non-algorithmic stablecoins such as USDC, BUSD, DAI, or USDT kept their peg.

Since then, HBD is back at above 0.97 USD, but UST is still struggling at around 0.90 USD after a significant recovery in recent hours.

From what I understood from other people covering the topic, what triggered the crash of LUNA and UST was a single sale of 300m USD on Curve, after which followed a domino effect, until countermeasures where taken.

But that's as far as I want to go into the Terra LUNA and UST problems.

What else happened during the last 24 hours? This is what happened: 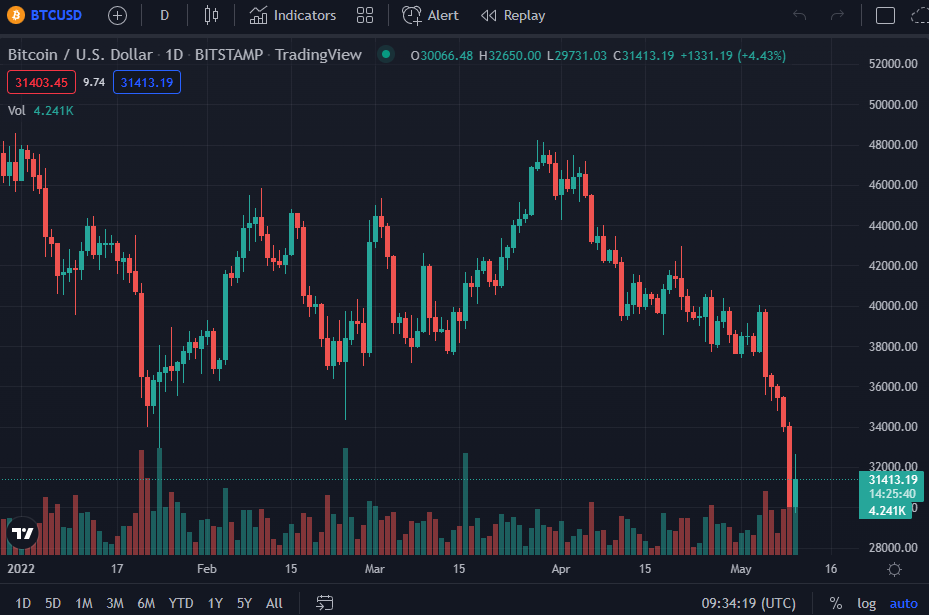 Bitcoin got hammered. Now, when something like this happens, some buy, others move to safety. I don't know what the entity that sold 300m UST used it for. Maybe they bought the dip or maybe they got cold feet and took their funds out of crypto. Who knows?

But they did make waves for the Terra ecosystem.

Now let's get back to our own Hive Dollars.

On the markets taken into consideration by aggregators like coinmarketcap and coingecko, HBD has pairings ONLY with bitcoin.

Now, HBD aims to be stable and bitcoin can be extremely volatile sometimes (such as yesterday, but it can be worse).

If someone holding HBD in one of the few CEXes where it's listed wants more bitcoin, they might sell HBD for bitcoin when the price of bitcoin crashes. That puts selling pressure on HBD on these exchanges. And the only way to arbitrage it is via the HBD/BTC pair, which might not be tempting when there is high volatility for bitcoin.

Technically, the same happens on Hive with the HIVE/HBD pair from the internal market, except on Hive we have the HBD Stabilizer which operates to reduce the volatility for HBD.

But what we do on Hive doesn't reflect on the price of HBD shown by coinmarketcap and coingecko, unless there is arbitrage happening.

The problem is who is going to do arbitrage between HBD on Hive and HBD/BTC when bitcoin is extremely volatile and mainly on one exchange - Upbit?

Normally it should, obviously.

If we look at the image I linked above regarding markets where HBD is listed, we see two pairs with over 100k USD transaction volume in the last 24h, both on Upbit, and almost 6k USD on Bittrex. I don't know if the volume we see on Upbit is real or if there is some wash trading as well. But let's assume it's real.

The volume on our internal market in the last 24h is over 175k USD, as we can see from this header:

How can this volume not matter as well for determining the price of HBD on aggregators like coinmarketcap and coingecko?

Even more, we do have the wrapped version of HBD on Polygon as we know. The last 24h volume for pHBD-USDC LP was 18k USD, which is 3x more than Bittrex, even though the LP is still new and growing. Also, the current price for pHBD is 1.01, still offering a little premium to reflect the demand for liquid HBD. 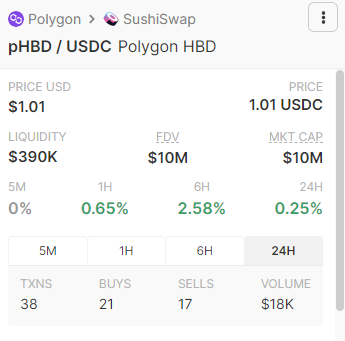 The pairing with a stablecoin for the wrapped version of HBD makes it easier to peg in times of turbulence, and that will only get better the deeper this pool will get.

So how come we don't see the internal market for HBD or the one on Polygon aggregated on... aggregators? I don't know. Actually, pHBD has a listing of its own, but that doesn't help HBD much.

I don't know if the internal market situation is encountered in other situations with other coins, but if we look at the markets for major stablecoins on coinmarketcap or coingecko, they will include their liquidity pools on major platforms like Uniswap, PancakeSwap, or SushiSwap (USDC has all three). They're also listed under the same token name, even though I assume they are different versions on each chain.

I wonder if we can do that for HBD, to aggregate or link together pHBD and HBD in the first stage under the same token name, so that all markets can be discovered from HBD and price be based on all of them. Not to mention bHBD will be coming and others will follow. Those should also come under HBD, in one form or another.

The same can and should be extended for the wrapped versions of HIVE if we can do it for HBD.

Yes, it doesn't hold peg very well because liquidity is still kind of low and market conditions were special. But within the last 24h, it's between 97c and 1.03 USD according to coingecko.

Up and down is the rollercoaster that is life personal or finacial thanks for sharing your insights @gadrian
Have a successful day
!ALIVE
!CTP

Yes, we have plenty of rollercoasters in our lives.

I find it hard to believe HBD will get pegged any time soon, but seeing how a top 10 coin is performing makes me feel bullish about our own HBD.

For HBD that would be around 430k USD if we take into account all HBD (including DHF) or about 160k USD if we consider only the 9m HBD that is free-floating.

I guess nobody sold 160k HBD at once on Upbit or Bittrex yet to see what happens with the price. Before something like that happens, I hope we will have other markets included for HBD, like pHBD-USDC.

This volatility of the stablecoin allows great arbitrage possibilities, although with risk it is clear.

That's true. Although I'm sure the majority would prefer they'd remain stable.

I didn't realize that HBD only had pairings with BTC so I guess the other pairing would be pHBD/USDC. With those types of pairing, BTC has a huge influence on the peg and I thought it was selling pressure caused by something like HIVE/BTC instead.

Nope, HBD is highly linked to bitcoin, at least where it matters for the price discovery. Because let's be honest, nobody outside of Hive comes to Hive to see the price of HIVE and HBD. They go to CMC or coingecko if they are interested. Maybe to SushiSwap who knows we have a pHBD there.

I think pHBD should be the new metric because of the liquidity over there. I just don't think the centralized exchanges have enough liquidity but I could be wrong.

I heard Khal relate a discussion he had with top witnesses. Not very encouraging...

This guy has some good thoughts on Twitter about UST losing peg and stables in general.
I was wondering about HBD, ain't it working exactly like UST? Being backed by crypto just like UST. Compared to some other stables.

HBD is not working exactly as UST, but they are both algorithmic stablecoins, and they have a mechanism of staying pegged with the help of the other coin from the ecosystem, in our case HIVE, in Terra's case, LUNA.

So if what happened to Terra was indeed a planned attack, HBD could also be vulnerable to similar ones in future.

I believe until the world stabilizes, things are going to be rocky. I also believe it will bounce back. So if you can now is the time to buy.

Yes, the current evolution in the crypto market is influenced significantly by what's going on in the world. Remains to be seen if this is the end or the beginning. I bought a little bitcoin, but conservatively. It can very well be the beginning of the bear market, although it would be a very atypical one.

Breathe in, breathe out, is all that I can say haha.
I'm not even looking at any charts right now.
All I keep thinking is that it will come back up eventually, and until then I just buy the dip as much as I can...

Sometimes it's better not to look at the sea of red. Be aware of it to make the best decisions, but don't stay glued to the screen to watch everything going down in real-time. So, it's ok that you stay away from the charts during these moments, imo.