I haven't written too much about Rising Star. Probably I have done the game an injustice, because the idol idea behind the game is pretty cool. But I guess Splinterlands takes a lot of everyone's attention.

For a while now, I had the goal to meet the requirements for playing the daily Starbits Millionaire mission. That's a big milestone, because even for the top players the fixed STARBITS amount provided by this mission is a significant portion of their daily earnings.

Yesterday I finally met the conditions and received the Starbits Millionaire card. And I played the mission for the first time. My daily earnings will increase something like 3-4 times because of that. 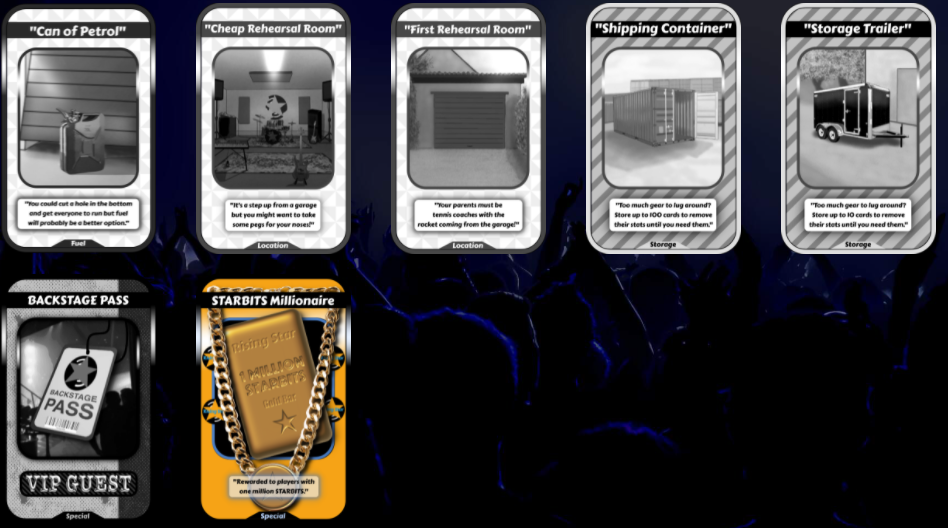 You don't only earn a fixed 10000 STARBITS for playing this mission, it only takes half an hour, meaning it doesn't take a significant amount of time that can be used to play other missions, and you don't receive ego points for playing it either.

Sounds too good to be true?

Well, there are two conditions for being able to play the mission, and you can only play it once a day:

On the second condition, the having part seems easier than the keeping part. Because I'm sure you'd want to put those STARBITS to work in something like the PIZZA:STARBITS diesel pool, for example. I know I'd like to.

But I have a plan here as well. Since the Millionaire's mission boosted my daily earnings significantly, I'm thinking to change my previous strategy of buying individual cards (avoiding doubles), and now I'll hold on to STARBITS until I'll have enough of them for 12 packs (i.e. 100k). That might take 7-8 days, depending on the daily earnings from the other missions.

During those 7-8 days and as STARBITS accumulate, I don't see why not I can't add them into the diesel pool, as long as I am careful to keep 1 million liquid.

I'm pretty sure the rate of growth of my Rising Star account will increase significantly from this point forward. Maybe soon I'll reach the top where Hive rewards are distributed as well.

If you haven't tried Rising Star before, give it a try, you might like it. It's entirely free to play, if you want to, and it only takes time to launch missions, otherwise it's relatively passive.

Welcome to the club!

Awesome accomplishment and congrats on your badge I'm trying to do the exact same thing. Just make sure if adding to the pools you don't do it daily as you won't get the rewards from it for 24hrs so if you keep adding to them daily they will never payout.
!PIZZA

Awesome accomplishment and congrats on your badge I'm trying to do the exact same thing.

Thank you and good luck to you as well!

Just make sure if adding to the pools you don't do it daily as you won't get the rewards from it for 24hrs so if you keep adding to them daily they will never payout.

I don't know about this, talking to different people we end up with different conclusions about this. It might differ from pool to pool. We really need a record of diesel pool rewards payments!

Congratulations on getting the STARBITS Millionaire card! Now, you will experience much faster growth in levels, cards, and earnings... ;)

But I have a plan here as well. Since the Millionaire's mission boosted my daily earnings significantly, I'm thinking to change my previous strategy of buying individual cards (avoiding doubles), and now I'll hold on to STARBITS until I'll have enough of them for 12 packs (i.e. 100k)

That's exactly what I'm doing... Buying 12 packs with earnings and opening them almost every second day at the moment, but I have started like you... Once per week, and then I got addicted... lol...

Every second day, that's super-cool, things really speed up at the higher levels.

Congratulations man! I know from experience that it's not that easy to reach it but you got there in no time!!!!

I also buy 12 card packs at a time. I get a lot of doubles but the cards all help to get more income.

Thanks! Well, in the end I applied your strategy: use Splinterlands earnings to finance the growth on Rising Star. Otherwise reaching 1 mil Starbits would have been a huge and lengthy task.

I think it's a good approach because with the millionaire's card, you can really generate a nice return. I believe it's always good to bring some diversification in :-)

Maybe this is a silly question, but do you have to keep the million Starbits even after you get the card? I was under the impression, you could use them as soon as you receive the millionaire card. Is there an official announcement to a policy around it?

I was under the same impression before I've been set straight by my friend @ph1102, who is already a veteran of the game. :)

But no, you can't do anything with that 1 mil Starbits or you won't be able to play the mission. You just need to keep it liquid on your Hive-Engine account.

The text of the mission is clear:

If you hold one million STARBITS on Hive Engine and you hold the Starbits Millionaire card you can do this mission once a day.

To avoid any confusions, the same info is repeated to you when you receive the Millionaire card on discord:

Congratulations, I have just sent your Millionaire card! Please be aware that the STARBITS earned from the millionaire mission appear on the LEFT SIDE of the account page with the other special mission balances. You will need to be at least level 50 to do the mission and you will need to keep 1 million STARBITS on Hive Engine to run the daily mission. IMPORTANT The Starbits Millionaire card is NON TRANSFERRABLE and anyone caught trying to sell theirs or transfer theirs to another player may have their account PERMANENTLY BANNED.

That is a big help. Thank you gadrian. I would have fucked it up on the first day holding the card, I'm sure of it 😀. It's a pity, that we can't even stake Starbits. Then it wouldn't hurt as much to have assets lying around.

It's a pity, that we can't even stake Starbits.

Think of it this way. By playing the Millionaire's mission, you receive a 1% interest PER DAY (that's 365% APR) on that 1 mil Starbits liquid. IF you play the mission.

You're totally right. And this is infinite. Ok, I'm hyped again :o).

Congratulations on becoming a Starbits Millionaire