Michael Saylor says: "Ignore All the Statistical Models You Had Before"

I've seen yesterday the post of @jrcornel where he mentions a podcast where Michael Saylor was invited and where he said that volatility will be lower going forward, now that institutions are involved.

Today I thought I should listen to the podcast as well. If for no other reason, because I never listened to the guy before.

So I did. I followed the link provided in the post which I'll add here as well, and listened through the entire 2h13m podcast.

For us, including myself, and the potential outcome of this bull market, revelant seems the discussion starting from around 1h30m.

That's where Michael Saylor said we should ignore all the statistical models we had before, including the ones about halvings.

He invites us to forget the history of the price of bitcoin and crypto in general, because we are entering a new phase, one in which those models have no meaning anymore. 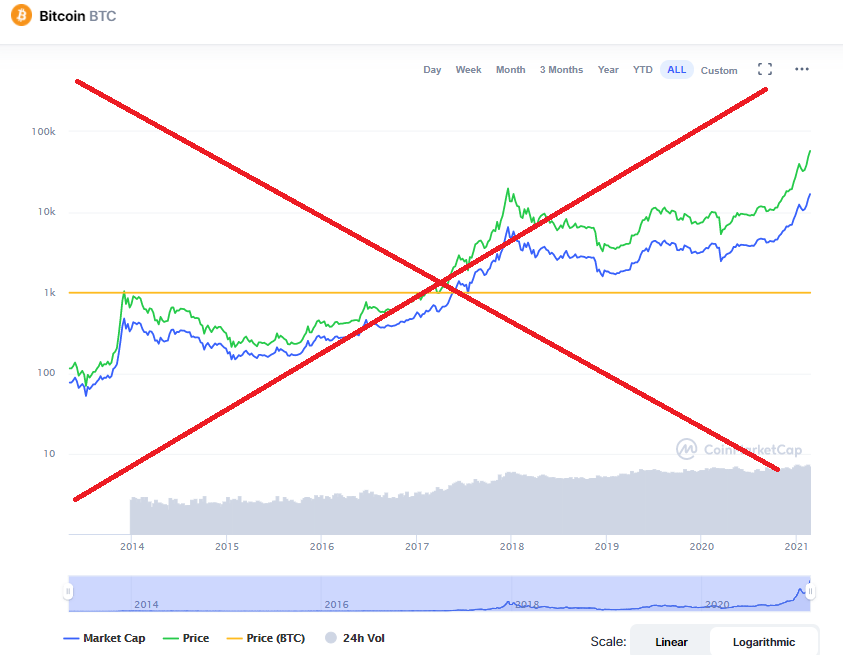 Is he right about it? I don't know and we shall see. But if he does, all models regarding the peak of the current bull market and the following bear market are going to the trash bin. So are our previous experiences in the crypto world and "war" scars, as well as carefully planned exits.

If we won't have a 80% crash anymore, is it still worth it to exit some of our assets? To be honest, I tend to believe him on this account, these corporations and big firms don't jump onto bitcoin only to see it crash 80% in a few months the following year.

If holding bitcoin now on the rise does great to their stock prices, what would happen to that price when bitcoin plunges?

I invite you to listen to this part of the postcast as well.

Share your impression on this as well. Jrcornel in his post disagrees with Michael and still thinks we will have a big crash coming from a peak of around 200k per bitcoin to around 40k.

I agree with you - the best option would be to skip this burlan and give it another 4 years!

If Michael Saylor is right, bitcoin's patterns may stop be meaningful, but that doesn't mean the same for alts, where less institutional money go. We'll have to see, because up until now bitcon dragged the entire market with it.

He might be incentivized to do that just to earn himself time for unloading their bags. There's a grain of truth there as we're witnessing the mass adoption of crypto, which makes me believe that the following bear market won't be that deep anymore. I was considering not selling everything once we seem to be topping out. I don't know what exactly I'll do. From a content creator point of view I just hope prices will keep on going up and never come back to earth.

Hmm, I don't think he'll unload. Not for years anyway.
And yes, we might be in uncharted territory. He seems to believe that and sells the same idea to whoever in the corporate world is willing to listen. But he is not really focused/interested in the retail investors who happen to be on the playground before they came, imo. He thinks of it as a corporate game from now on, and he might be right.

He’s done it multiple times now, raising funds from investors to buy more BTC. I would not be surprised if he repeats this pattern a few more times.

Yeah, I know. You don't buy bitcoin on debt if you don't believe in its future.

I listened to the same 2 hour podcast. Saylor’s thinking is extraordinary. You know what, I’m gonna go listen to it again from the beginning.

I like that he doesn't fall into the trap of considering bitcoin a replacement for US dollar. Doesn't say that and I think he doesn't believe that either.

He sees bitcoin as a replacement for gold and treasuries.

Having a lot of experience on the other side of the baricade (fiat), he can easily pinpoint its flaws and highlight the qualities of bitcoin by comparison.

And he has the background and authority that makes other CEOs and CFOs listen.

That’s right. He has a track record for being correct. His previous thesis “the mobile wave” was spot on. The next one is the “virtual wave” and Bitcoin is part of it.

I am so grateful he takes so much time to share his ideas via interviews. But that is also part of his “virtual wave” thesis. He is virtualizing himself to multiply his impact on the world.

Congrats ,you were upvoted from this account because you were in Top 25 engagers yesterday on CTPTalk .
You made a total of 8 comments and talked to 5 different authors .
Your rank is 4 .
For more details about this project please read here - link to announcement post
You can also delegate and get weekly payouts.

Amazing , your next challenge is to beat me in CTP list . Challenge accepted ?

Lol yes , let's see what you got nowm