Yesterday I wrote a post where I talked about the atypical bear market we find ourselves in.

This morning, as I was going through my routine I noticed an important price difference compared to yesterday when I wrote my post. Prices going up, not down...

Normally, I don't pay much attention to prices, but when they are on the move, I like to have an idea where they are heading. And maybe see some opportunities.

The problem is, was I wrong when I thought we are in an atypical bear market yesterday, seeing this hard bounce today above 30k for bitcoin (and the entire crypto market)? 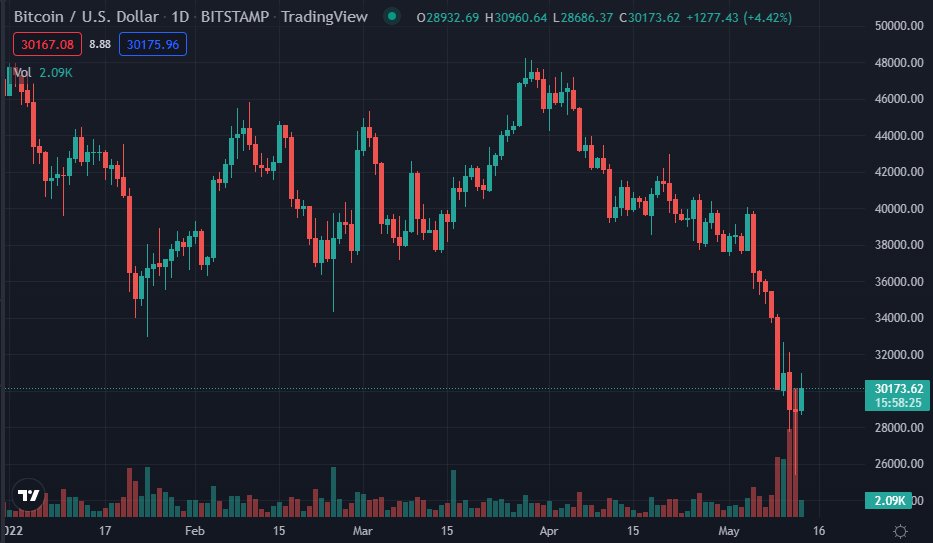 No. I don't think so. They are still bull traps in my opinion. Look how things were in the first phase of the bear market in 2018, when we had a 'classical' bear market, with a blow-off top: 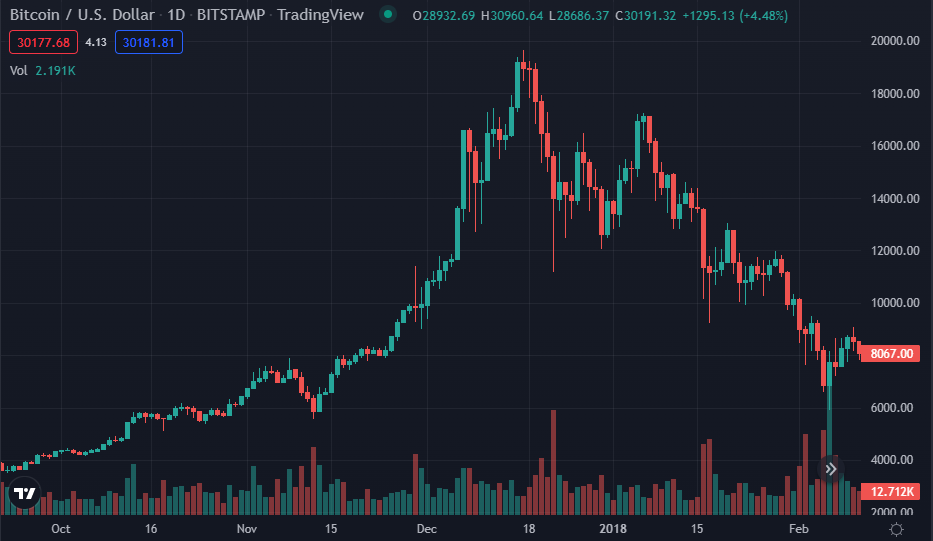 There were several bull traps on the way down, the most important of them close to the top. We are not in the same scenario, but bull and bear traps will always be there if you try to time the market.

You know that saying: time in the market beats timing the market.

Speaking of timing the market (which I wasn't trying to do), that one sucked for me yesterday, right before this push up.

It's true, I only moved to a slightly move defensive portfolio still holding volatile assets alongside stablecoins. I might move to an even more defensive position from here, now that the market is a bit up.

Looking for the best approach for Cosmos assets... They are 98% of them locked for 14 or 21 days and volatile, except for... UST. Sad joke. My funds on Cosmos won't make or break me, but I'd rather not lose another sizeable portion of them in dollar terms during the bear market. By the way, the APR for LUNA/OSMO on Osmosis is over 47000% at the time of writing. Any takers? Another sad joke.

Allow me to share my brief journey as a stock trader.

I entered the stock market in 2015 with the intention to become a long-term investor. But after experiencing the daily volatility, I immediately changed my strategy to a short-term trader for this is more suitable for my personality. In the stock market, I didn't aim for a "home run". I was satisfied with small but consistent gains. Nevertheless, despite those gains, I could not monitor my progress for I failed to keep a record of my trades. I only started record-keeping in 2019, and I thought that I can keep such practice. I was wrong. I gave it up after being caught off guard again by the bear market in July last year.

Entering cryptocurrency, I never thought of trading a token for short-term gain. It's more like a long-term building project for me. Just like you, though I don't concern myself much with market price, I still check it when buying a token. My focus for now particularly in this environment of bargain prices is to keep growing the stakes of the tokens in my list. Whether their prices will dive even deeper, I will just keep adding for I consider times like this as a rare opportunity.

I do agree with you about bear market presenting opportunities.

I bought myself some HIVE yesterday, but also HBD, both being primary targets for me on Hive this year.

I wanted to buy more SPS, but before I decided to do so, it started to pump once again, and I didn't buy it after all. I have quite a few SPS to wait for better opportunities.

HIVE, SPS, and DEC are my targets now. I am converting my HBD to HIVE since the start of May for PUM participation. Maybe next week, I can add more.

Yep, I need to keep an eye on the price of DEC too. Although all three are hunted by many others. I have a feeling there are/will be other better opportunities out there, less visible.

DEC is the cheapest token on my list. 75 days remaining before the airdrop ends, so I am thinking that by buying more DEC, I could at least increase my SPS daily airdrop a little bit.

That's exactly the price now both on the bid and the ask sides.

Yeah, because people know they'll get a discount if they buy at a lower level.

It might be an unordinary bear market, but that doesn't it won't go down further. Worth mentioning is also the fact that after so much bleeding we had to have a relief.

Worth mentioning is also the fact that after so much bleeding we had to have a relief.

This is a great point. These can also be seen as reliefs.

Nothing more than that.

I'd need prices to pump back up to the $50k range before I would be able to do anything. Really that is not true, I need alt season to happen. My BTC is a permanent hold.

It will take a long time to have bitcoin back at 50k. But it'll get there at some point.

There is a price at which people cannot resist and buy, sending the price up. I guess below 30k was the magic BTC price. Thanks for sharing.

Hope is dangerous in a bear market. And I believe many are hoping the 28-29k will hold.

They usually track you, lol.

There will always be pauses in the trend and I still think we aren't at the bottom just yet. I wouldn't even take the LUNA/OSMO pool at all because of the IL. If LUNA goes to zero, your gonna be left with no OSMO.

I wouldn't even take the LUNA/OSMO pool at all because of the IL. If LUNA goes to zero, your gonna be left with no OSMO.

I began the withdrawal process for the 2 pools where I have LUNA and UST, but it takes 14 days to complete.

I think 29-32k is still in bearish territory. If people get reassured by this small bounce, it will be a shock if it falls further!!